Multidrug resistance, in rapidly spreading bacterial species, is a matter of concern in health care units. Samples (6840) collected from a Saudi hospital in Madinah, were screened for Acinetobacter spp. and studied for frequency, gender distribution, and seasonal variations besides antimicrobial resistance pattern. Acinetobacter strains represented 5.5% of the clinical isolates from different sources. Of these, 63% were recovered from male samples. The largest numbers of these organisms were isolated from sputum and wound swabs representing about 85% of the samples. Antimicrobial sensitivity pattern showed that colistin was the most effective drug since it inhibited 76% of the Acinetobacter isolates. The remaining drugs did not reveal sensitivity greater than 15%. Results suggest colistin to be a promising drug in the treatment of Acinetobacter infections. It was also observed that percentage of these infections was highest during summers representing 39.15%, followed by autumn (28.17%) and winters (26.48%), while spring season recorded the least percentage with only 6.2% of infections. The present study was an attempt to generate data on the prevalence of resistance pattern and management of Acinetobacter infections.

Acinetobacter species  are  gram  negative  bacteria  that belong to  the family Moraxellaceae. These encapsulated
cocco-bacilli rods are non-motile, aerobic and do not ferment glucose. They test positive for catalase and citrate but negative for indole and oxidase (Manchanda et al., 2010; Almasaudi, 2018). They generally form part of the normal body flora but can cause a wide variety of local and systemic infections like pneumonia, septicemia and wound infections (Beggs et al., 2006; Almasaudi, 2018). The species can often be isolated from reusable medical equipments such as ventilator tubing, artificial pressure monitoring devices, humidifiers and wash basins. Gram-negative bacteria have the ability to acquire drug resistance genes such as extended-spectrum-lactamases (ESBLs), AmpC-β-lactamase, and carbapenemases (Al-Arfaj et al., 2011; Bader et al., 2017).
Acinetobacter spp., especially A. baumannii, have been described as the leading nosocomial pathogen and is prevalent world-wide (Abbo et al., 2005; Kanafani and Kanj, 2014). It is responsible for high mortality rates in critically ill patients (Doughari et al., 2011). It is found more frequently in hospital ICUs, than Staphylococcus aureus and Pseudomonas spp. (Almasaudi, 2018). A. baumannii is considered the “red alert” pathogen by the Infectious Diseases Society of America as it has significantly threatened the efficacy of the present antibacterial (Peleg et al., 2008). Several cases of drug resistant A. baumannii have been reported from hospitals in UAE, Bahrain, Saudi Arabia, Palestine and Lebanon (Almasaudi, 2018). Studies have shown that the most frequently isolated organism from ICU patients of tertiary care hospitals in Riyadh, Saudi Arabia is A. baumannii (Saeed et al., 2010; Kamolvit et al., 2015). High infection rates have been reported from the southern region of Saudi Arabia (Al Bshabshe et al., 2016; Almaghrabi et al., 2018).
At present, antibiotics are used frequently in diverse fields. They are prescribed to take care of unwanted infections that may occur during surgeries, organ transplants, and for the treatment of chronic infections (Teillant et al., 2015). Antibiotics are also used in animal husbandry and agriculture. To be precise, knowingly or unknowingly, there is exposure to different antibiotics which besides being toxic lead to multidrug resistance (MDR) and high treatment expenditures (Zowawi, 2016). MDR has already become a health issue at global level and it has been estimated that by the year 2050 it will be the leading cause of maximum deaths. MDR is common in Gram-negative bacteria and unfortunately there is scarcity of drugs that can provide effective treatment (Prestinaci et al., 2015). Contemporary studies from Middle East have shown that MDR in microbes is increasing extensively (Alawi and Darvesh, 2016). Carbapenem-resistant A. baumannii from Saudi Arabia have also increased dramatically over the years (Zowawi, 2016). A recent study showed that Saudi diabetic patients were   significantly   more   likely   to   carry  carbapenem-resistant isolates of this species (Alsultan et al. 2013). It has now become crucial to deal with MDR and this is possible by first being aware of the perils involved and then formulating and complying with appropriate guidelines (Baadani et al., 2015; Al-Harthi et al., 2015). The present study is an effort to determine the prevalence and antimicrobial susceptibility pattern of Acinetobacter spp. from clinical sources at a busy hospital in Madinah, Saudi Arabia.

Due to ever increasing drug resistance, not many effective antimicrobials are available for the treatment of nosocomial Acinetobacter infections. Hence, there is an ardent need to develop new drugs and re-evaluate older antimicrobial therapies (Jain and Danziger, 2004). The risk factors that lead to infection with resistant Acinetobacter spp. are: prolonged stay in hospital (especially ICUs), mechanical ventilation, exposure to antimicrobial agents especially carbapenems, recent surgeries, invasive procedures and chronic illnesses (Manchanda et al., 2010). Self-medication and careless prescriptions given by doctors make matters worse. Several studies have reported the antimicrobial resistance patterns in Saudi Arabia, but there are only a few reports from Mecca and Madinah (Rotimi et al., 1998; Al-Johani et al., 2010; Zowawi, 2016). These two cities are visited by a large population of pilgrims every year. The present study is an endeavor to understand the resistance pattern of Acinetobacter spp. to several antimicrobial drugs. Frequency, gender distribution and seasonal variations were also studied with respect to infection caused by these bacteria.
Figure 1 shows the percentage of Acinetobacter spp. in comparison to other clinical isolates. These bacterial species comprised 5.5% (379 strains) of the total isolates; 62.8% (238 strains) were from male patients and 37.2% (141 strains) were from female patients (Figure 2). A higher number of isolates from male patients indicate greater prevalence of these infections in males than females. This pattern has also been displayed in several previous studies (Abbo et al., 2005; Masoud et al., 2011; Magliano et al., 2012; Howard et al., 2012; Haseeb et al., 2016). Figure 3 shows the percentage of Acinetobacter spp. recovered from various clinical sources. Pus, bile, ascitic fluid, vaginal swabs, urethral discharge, semen, bone tissue, appendix, gall bladder aspirates, cystic fluid, necrotic   tissue   were   some   samples  from  which  the Acinetobacter spp.  were not recovered. Majority of the isolates were from sputum (54.1%) and wound swabs (30.34%). Catheter tips, throat aspirates, tracheal aspirates and cerebrospinal fluids constituted 6.07, 3.43, 2.64 and 1.32%, respectively. Abdominal abscess and pleural fluid contributed only 0.53% each while ear swabs, peritoneal wound swabs and brain tube each provided the lowest percentage of 0.26%.

Table 1 provides an estimation of the gender distribution of samples isolated from different sources. As mentioned above, the major sample sources of the Acinetobacter spp. were sputum and wound swabs comprising 84.44% of the isolates. Out of 205 sputum samples, 59% were from males and 41% were from females. In the case of wound swabs (115 samples), 64.3% were from males and 35.7% were from females. Similarly, in case of cerebrospinal fluid and tracheal aspirates, although the samples were less in number, the male to female percentage ratio was 80:20. In case of catheter tips, again 74% samples were from males and 26% were from females. Only 13 samples were available from throat aspirates and were in the ratio of 53.8 males to 46.2 females. Pleural fluid provided only 2 strains, one  each  from  male  and  female. Ear, peritoneal wound swab, eye cornea swab and brain tubes provided only 1 sample each and that also from males. As the sample number from these sources was low, significant conclusions could not be drawn from them. The results hence indicated that males are more prone to infection than females. Lifestyle differences of both the genders and social and economic factors have an influence on the infection pattern. In Saudi Arabia, since women live a protected life usually indoors, their chance of acquiring bacterial infections is usually low in comparison to males. This pattern has been reported by other researchers as well (Haseeb et al., 2016; Magliano et al., 2012).

Antimicrobial drug susceptibility pattern of Acinetobacter spp. was assessed for 15 antimicrobial drugs listed in Table 2. All the drugs showed low sensitivity for Acinetobacter. Highest sensitivity was shown by colistin (76%), followed by amikacin (14.78%), gentamycin (12.9%) and imipenem (10.82%). For the remaining antimicrobials, the percentage was below 7% being significantly low. Highest resistance was shown towards cephalothin (99.74%), tazobactam (99.48%), augmentin (99.21%) and cefoxitin (99.21%). The percentage resistance of Acinetobacter spp. for other antimicrobials was  in the following order: tigecycline (98.96%) > ceftazidime (98.42%) > cefpiramide (98.42%) > ciprofloxacin (98.15%) > aztreonam (97.89%) > piperacillin (97.63%) > cotrimazole (93.14%) > imipenem (89.18%) > gentamycin (87.1%) > amikacin (85.22%). Colistin showed comparatively low resistance of only 24%. The results of the present study are coordination with the previous findings (Fishbain and Peleg, 2010). A study conducted in the southern region of Saudi Arabia showed that 74% of Acinetobacter isolates had MDR of which 50% were sensitive to colistin. These were resistant to all the other antimicrobials studied (Falagas et al., 2015; Almaghrabi et al., 2018).
Bacterial infections occur throughout the year but show seasonal variations depending upon several factors (Fares, 2013). These factors have to be explored to understand the prevalence and prognosis of the infections and to evolve novel and improved infection control strategies. There are several reports claiming that bacterial infections always peak during summers and winters (Perencevich et al., 2008; Eber et al., 2011; Richet, 2012). Table 3 shows the infection pattern of Acinetobacter during four different seasons of  the   year   in   the   city   of   Madinah. 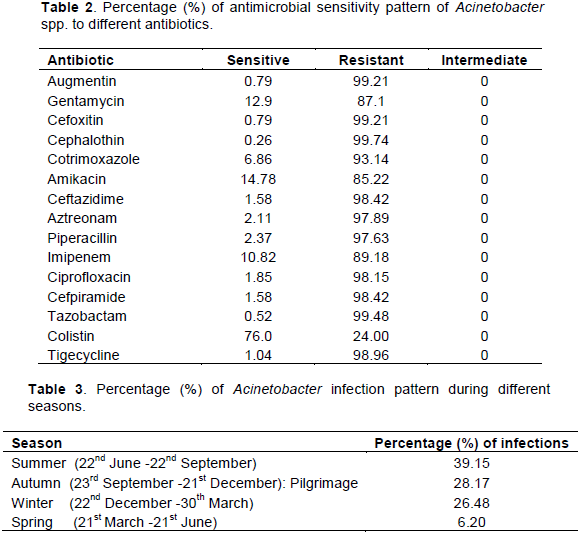 Infections occurred with highest frequency in summers at 39.15 %. In winter season the infection was comparatively low (26.48 %). This maybe because the autumn season, that follows winters, coincides with the annual Hajj pilgrimage. This season experiences a huge influx of people into the two holy cities of Makkah and Madinah. During this event special care is taken by the health authorities to monitor and control any outbreak. As a result, low percentage of infections is recorded. A pattern of high infection rates in summers followed by slightly lower rates in the pilgrimage season have also been observed in the case of other Gram negative bacteria namely Proteus (Bahashwan and Shafey, 2013), Klebsiella (Ghanem et al., 2017), Pseudomonas (Saeed et al., 2018a) and E. coli (Saeed et al., 2018b) during the same period of study.
The two holy cities of Makkah and Madinah are visited by people from all around the world for Umrah and Hajj. Although Hajj is performed in a particular season, Umrah is performed all year round. It is a huge challenge for health authorities to keep infections under control. The enormous amount of people visiting at the same time from different places can lead to uncontrollable epidemics. Special precautions taken by the health care authorities help to keep infections and antimicrobial drug resistance in control. Several infection control programs are being implemented like the World Health Organization (WHO) hand hygiene program, the Gulf Cooperation Council (GCC) Infection Control Program (Yezli et al., 2014) and the antimicrobial stewardship program (Alawi and Darwesh, 2016; Zowawi, 2016). These programs are well coordinated into providing safe and cost-effective strategies for improved patient outcomes and reduced antimicrobial resistance.

Sputum samples followed by wound swabs were found to be the largest source of Acinetobacter isolates. Samples isolated from male patients were a greater source in comparison to the female patients, maybe because males are at a greater risk to infection, being the main work force in Saudi Arabia. None of the tested antimicrobials showed 100% sensitivity. The highest sensitivity   was  shown  by  colistin  at  76%  followed  by amikacin, gentamycin and imipenem. The rest of the antimicrobials showed a sensitivity of less than 7%. Highest resistance was displayed by cephalothin, tazobactum, augmentin and cefoxitin in the same order. These antimicrobials should be prescribed with care. The infections occurred with highest frequency in summers and lowest in spring. The frequency dropped in autumn as it coincided with the Hajj season when authorities are extra cautious. The present study will help in generating local database that can be used for formulating infection control strategies in this area, especially during pilgrimage season. People should get appropriate education on the issue of MDR, especially physicians who should develop a sense of responsibility while prescribing antibiotics. Similar studies will contribute towards creation of effective guidelines and infection control programs.

The authors would like to thank the Microbiology staff of King Fahd Hospital, Al Madinah Al Munawarah, Saudi Arabia for their assistance with data collection.