This study was conducted to examine microbiological quality and antibiotic susceptibility of bacterial pathogen of ready to eat sliced pineapple and water melon. Pineapples and water melon were purchased from three different vendors in Sango, University of Ibadan and Apete markets. Isolation and identification of pathogens were carried out using culture dependent method, morphological and biochemical characterization, respectively. Bacterial isolates were tested for antibiotic susceptibility. Results showed that all samples were contaminated. Lactobacillus species had the highest percentage frequency of occurrence (35%), while Proteus, Pseudomonas, Shigella and Salmonella species had the least (5%). Multiple drug resistances were observed among the isolates when subjected to Ampicillin, Ceftazidine, Cefuroxine, and Augumentin. Despite the dominance of Lactobacillus spp. in this study, the presence of Escherichia coli, Shigella spp., and Salmonella spp., Staphylococcus aureus, Klebsiella pneumonia and Enterobacter species together with their multiple drug resistance call for public health attention. Quality of vended fruits will be better assured if there are improved hygienic practices and awareness among fruit vendors as well as the consumers. There is need to monitor the spread of multiple drug resistant antimicrobial pathogens in vended fruits to avoid outbreaks.

Balanced diets enriched by fruits and vegetables are of utmost importance due to their nutritional values and ability to reduce risk of illnesses (Mahmoud et al., 2019). Fruits could be eaten wholly or sliced (Erhirhie et al., 2020). Ready-to-eat sliced fruits are fruits that have been cut open, sliced into bits, but remain in the fresh state and sold from retail outlets. They are usually eaten immediately, easily accessible, convenient and most especially cheaper than the whole fruit (Nwachukwu et al., 2008).

Additionally, increase in the incidence of antimicrobial resistance bacteria in humans, animals and the environment is a major concern in both human and veterinary medicine and Infectious Diseases Report noted that drug resistant organisms are prevalent worldwide (WHO, 2000). Fruits can be infected with antibiotic resistance contaminants though several sources. Manure use in enhancing soil fertility harbours bacteria that can be carrying the Antibiotic Resistant Genes (ARG), which can be horizontally transferred to soil bacteria. This in turn, can contaminate fruits and vegetables. This is also applicable when there is faecal contamination of soil or spray of soil with antimicrobial agents. Also, during plant tissue culture, inclusion of antimicrobial agents in the culture medium can prevent or often treat microbial contamination but increase the chance of build-up of antibiotic resistance (Rashmi et al., 2017).

This work therefore aimed to determine microbial spectrum of ready-to-eat sliced pineapple and water melon fruits together with the assessment of bacteria susceptibility to antibiotics.

On the 2nd of January, 2020, samples of sliced pineapple (Ananas comosus) and watermelon (Citrullus lanatus) were purchase randomly at three different sellers in three markets (Apete, Sango and University of Ibadan), Oyo State, Nigeria. All samples were collected in sterile plastic bags and transported to laboratory for analysis.

Enumeration and identification of microorganisms

Isolation of bacteria from the fruit samples

From each fruit sample, 2 g was cut and mashed in a mortal using a pestle and 1 g of sample was weighed into 9 ml of sterile distilled water in McCartney bottle. A 10-fold serial dilution of the solution was done in sterile distilled water and 0.1 ml of dilutions 10-3, 10-5 and 10-6 were plated using pour plate technique on eosin methylene blue agar (EMB), Salmonella-Shigella agar (SSA) for bacterial isolation and identification. All samples were duplicated and incubated at 37°C for 24 h for bacteria and 72 h at 30°C (Cheesbrough, 2011). After incubation, the cultured plates were observed for growth and distinct colonies were selected and streaked on their respective medium, the pure cultures were inoculated on slant and stored in the refrigerator for further studies. Phenotypic identification of the bacteria isolates were carried out according to Boone et al. (2005).

The susceptibility of each isolate to commonly available antibiotics was carried out using disc diffusion method. Mueller Hilton agar was prepared according to manufacturer’s specification and sterilized in an autoclave at 121°C for 15 min. The isolated organisms were inoculated on the agar using a swab stick. Each antibiotic disc (10 µg) was aseptically placed on the surface of the plate with sterile forceps, to ensure complete contact with the agar surface. The plates were incubated for 24 h at 37°C, clear zone of incubation around the antibiotic disc on the plate indicated susceptibility of the isolates. Inhibition clear zones were measured in millimetre and grouped into antibiotics sensitive and resistant isolates (Cheesbrough, 2011).

Among all the bacterial isolates from sliced pineapples (Figure 1a), Lactobacillus spp. had the higher percentage occurrence of 35%, followed by S. aureus at 18%, E. coli and B. subtilis at 12% while Proteus, Pseudomonas spp., Shigella spp. and Salmomella spp. had the occurrence rate of 5%. With the exception of Pseudomonas and Klebsiella spp. which are the least (8%), all other bacteria isolates had same occurrence level (16.8%) in water melon (Figure 1b). 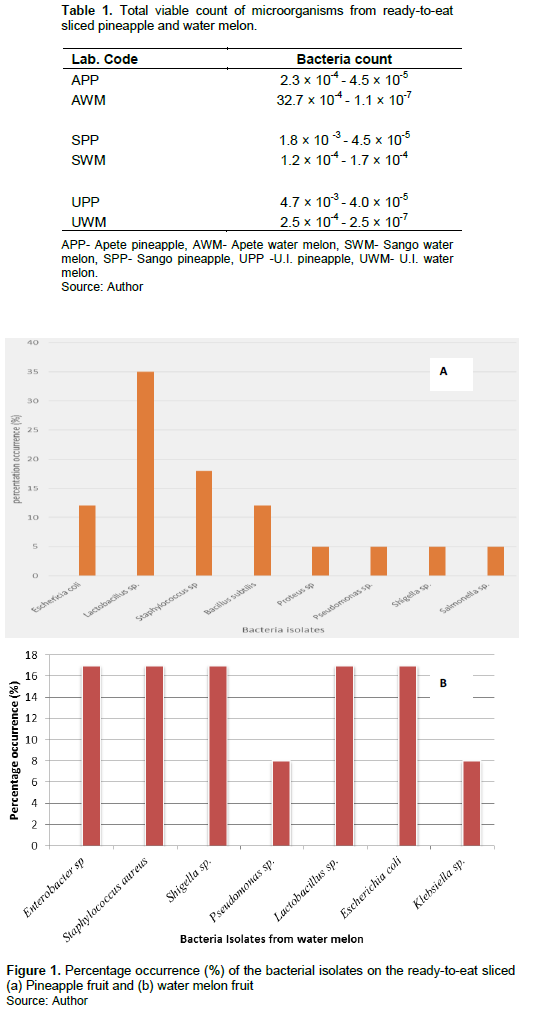 According to Wadamori et al. (2016), various pathogenic microbes can contaminate fresh fruits and vegetables at any point in the chain. The presence of these bacteria contaminants indicated that, microbial contaminants of fruits and vegetables occur mainly because of resident microflora in the soil, application of non-resident microflora via animal manures, sewage or irrigation water, transportation and handling (Ray and Bhunia, 2007; Ofor et al., 2009). Similar report had been previously shown though not in Oyo State (Adebolu and Ifesan, 2001; Tambekar and Mundhada, 2006; Uzeh et al., 2009; Eni et al., 2010). Although it is worthy to note that Lactobacillus spp. are normal flora of the fruit. Their presence could also be due to the fact that they are obiquitious occurring naturally in a variety of niches, including the gastrointestinal tract and plants (Mohania et al., 2008). Their dominance could be traced to their ability to inhibit the growth of pathogenic bacteria by producing antimicrobial substances (such as lactic acid) (Olateru et al., 2020).

The presence of Staphylococcus indicates unhygienic handling of fruits. The samples obtained from Sango pineapples had variety of organisms; this might be attributed to poor handling and storage condition (Bello et al., 2016)

The prevalence of pathogenic organism in all samples can be as a result of improper washing and decontamination of these produce. In support, Eni et al. (2010) isolated S. aureus with percentage occurrence rate of 29.2%, followed by Klebsiella spp. (12.5%), Salmonella spp. (12.5%), E. coli (4.2%) and Actinomycetes (4.2%) from ready to eat fruits and vegetable in Sango-Ota, Ogun State Nigeria. As noted by Buck et al. (2003), enteric pathogens such as E. coli and Salmonella spp. are among the greatest concerns during food-related outbreaks. Several cases of typhoid fever outbreak have been associated with eating contaminated vegetables grown in or fertilized with contaminated soil or sewage (Beuchat, 2002). Besides, contamination observed in this study may be attributed to storage conditions or cross contamination between fruits as a result re-washing with used water or water recycled by the vendor or processor (Topalcengiz et al., 2017).

It is very important to note that the outward appearance of fruits gave a wrong assessment of the microbial quality. Hence, awareness is to be created both for the consumers and the vendors. There is also need to increase surveillance of antibiotic resistant pathogen in ready to eat foods.