Tchoukoutou is a traditional sorghum opaque beer produced and consumed in Benin. It is obtained from an uncontrolled fermentation of sorghum wort using a traditional starter called “kpete-kpete”. The present study assessed the effects of storage duration on the physicochemical and microbiological characteristics as well as on the functional properties of the heat stabilized starter produced from “kpete-kpete”. The physicochemical characteristics of the stabilized starter were not significantly affected by the storage duration. After 60.0 days of storage, the dry matter, pH and titratable acidity were stable with mean values of 92.5%, 4.76 and 1.33 g/kg, respectively. However, the microbial characteristics of the product were significantly affected by the storage duration. Yeasts, lactic acid bacteria (LAB) and total mesophilic aerobic counts were modified following three phases: a latency phase (between 0 and 10 days), an exponential growth phase (between 10 and 40 days) and the decline phase (between 40 and 60 days). As compared to the stabilized starter, the physicochemical characteristics of “kpete-kpete’’ were extensively modified after 15 days of storage. In the traditional “kpete-kpete’’, all the major groups of microorganisms, reached their maximum growth phase after 10 days of storage suggesting that they would have lost their fermentation power afterwards. The fermentation test performed using stabilized starter sampled at different growth phases, revealed that the starter of 25 days of storage possesses better fermentation capacity. In these conditions, the fermentation duration was reduced to 16 instead of 24 h.

Sorghum is an important nutrients source for millions of people in the semi-arid regions where it is a main staple (Lyumugabe et al., 2012). Cumulative to its adaptability to harsh environmental conditions, being tolerant to drought and  low-input   conditions,   sorghum    contains   diverse phytochemicals with various functional properties (Shumba, 1994; Nkongoloand and Nsapato, 2003). Sorghum ranks fifth among cereals worldwide (Grubben and Partohardjono, 1996) and is directly used or transformed  into   various   food   commodities  including traditional alcoholic beverages (Dicko et al., 2006). Commonly called traditional opaque beers, these sorghum beverages play a significant role in African people cultures (Aka et al., 2008). Tchoukoutou, a traditional opaque sorghum beer of Benin, is produced, sold and consumed as street food all over the country. Like many other opaque sorghum beers in Africa, tchoukoutou has a sour taste, relatively high dry matter content (5 to 13%) and low alcohol content (2 to 3%) which make it suitable beverage for adults and teenagers (Agu and Palmer, 1998; Briggs et al., 2004). Considering the large quantity that is daily consumed, it is regarded as a significant source of dietary nutrients. Moreover, tchoukoutou significantly contributes to the diets of millions of people and generates income for the women sellers who produce it at household level, using the traditional technology (Kayode et al., 2007). Basically, the manufacturing process consists in malting, sun drying, milling, souring, boiling, mashing and alcoholic fermentation (Odunfa, 1985; Haggblade and Holzapfel, 1989). The fermentation constitutes a major step in the process. Prior to the alcoholic fermentation, the wort is inoculated with a traditional starter called kpete-kpete which is harvested from the previous fermenting beer. But the preservation of such a starter is a tedious and chancy business, since it may lose its fermenting properties within three days. In order to ensure quality safety and product stability, the stabilization of kpete-kpete in the form of a lasting starter is necessary. The procedure to stabilize kpete-kpete in the form of granule starter was previously described (Kayode et al., 2012). However, the storage behaviour and the functionality of such stabilized starter is not yet investigated. The objectives of the present study are two-fold. Firstly, to assess the effects of storage conditions on the physicochemical and microbiological characteristics of the stabilized starter. Secondly, to determine the maturation period of the improved starter that warrant its efficient functionality.

Traditional starter, locally known as kpete-kpete, was collected from a “tchoukoutou” producer, in one commercial processing site, Abomey-Calavi town. The samples were collected in sterile bottles, packed in ice cold box and transported to the laboratory. Four kilograms of cleaned sorghum grains were dehulled using a mini-PRL dehuller (Thiés, Sénégal) and then ground. The flour obtained was mixed with distilled water (42% w/w), inoculated with 10% (w/w) of kpete-kpete, after being warmed up at 70°C for 15 min. The inoculated flour was allowed to ferment in a plastic bucket with lid for 24 h before being granulated. The wet granules were oven dried for 24 h at 43°C and then conditioned.

In order to  compare  the  ability  of  both  traditional  and  stabilized starters to preserve their functional properties during the storage, subsamples (50 g) of each of them were prepared and stored at room temperature for a period of 40 days (traditional starter) and 60 days (improved starter). Samples of the traditional starter could not be stored beyond 40 days because after this period they were totally spoiled. Samples were withdrawn every 10 days’ time and analyzed in triplicate for physicochemical and microbiological characteristics. This stage helped to identify different growth phases (latency, exponential and stationary phases) of the microorganisms. The study of the functional properties of the stabilized starters focused on their ability to ferment the sorghum wort. For this purposes, samples (50 g) of granules starters of 5 days, 25 days and 50 days of maturation corresponding to latency phase, exponential phase and stationary phase were respectively used to inoculate 1 L of sterile sorghum wort (autoclaved at 121°C for 1 h). The inoculated wort was allowed to ferment for 24 h at room temperature and samples were withdrawn at 0, 8, 16 and 24 h in triplicate for microbiological analysis.

Dry matter was determined according to the AACC method (AACC, 1984). The pH was determined using a digital pH meter (HI 8418; Hanna instruments, Limena, Italy) calibrated with buffers at pH 4.0 and 7.0 (WTW, Weilheim, Germany). The titratable acidity, expressed as lactic acid, was performed by using the method described by Nout et al. (1989). The refractive index was measured using a refractometer (Sopelem 9596, France).

Data were analyzed with the SPSS 16.0 software (SPSS Inc., Chicago, IL, USA). Comparison of the mean values was performed applying the one-way analysis of variance (ANOVA) by using a mixed model with two factors (repetitions and type of starter).

Effects of storage duration on the physicochemical characteristics of the starters 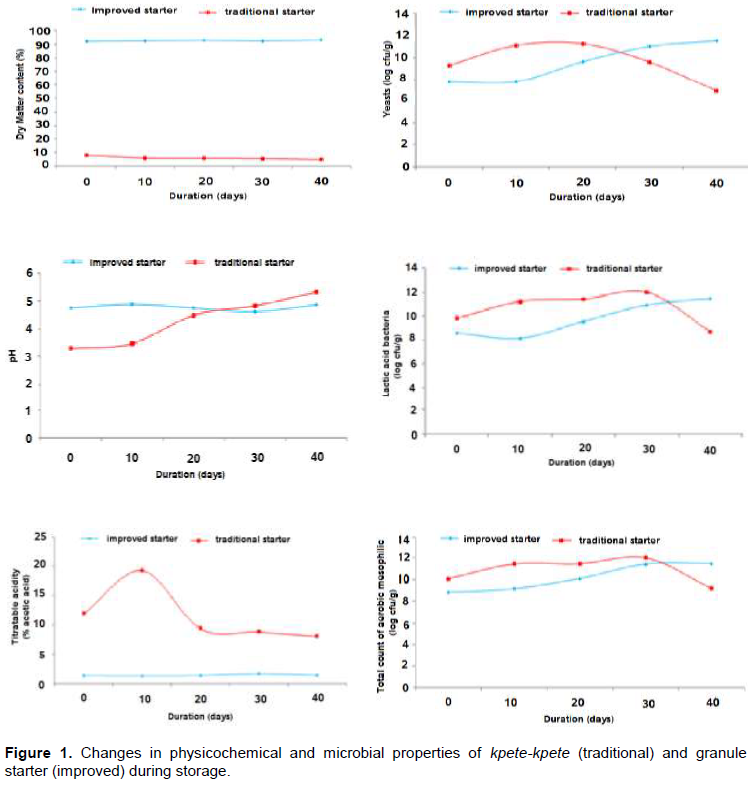 Effects of storage duration on the microbiological characteristics of the starters

Functional properties of the improved starter were assessed through its ability to ferment the sorghum wort. Thus, the effects of storage duration on the functional properties of the improved starter were evaluated using a fermentation test. In this respect, improved starter sampled of various storage durations, that is, 5, 25 and 50 days of storage, corresponding to the three growth phases were respectively used to inoculate different samples of sterile sorghum wort. The inoculated sorghum wort was allowed to ferment for 24 h. LAB and yeasts were enumerated at 0, 8, 16 and 24 h. Results of the analysis of variance showed that storage duration of the improved starter significantly affected (p < 0.001) the growth pattern of LAB and of yeasts during the wort fermentation. Likewise, the fermentation duration significantly affected (p< 0.001) the LAB and yeasts growth in the wort. Moreover, the interactive effects of starter duration x fermentation duration significantly affected   (p     <     0.001)     the     functional    microflora concentration in the wort (Table 3). LAB and yeast were simultaneously affected by the storage duration of the improved starter, the fermentation duration and the interactive effects of starter duration x fermentation duration. A symbiotic relation between yeast and LAB in the wort was reported (Munyaja et al., 2003). LAB created an acid environment favorable to the proliferation of yeasts which produce vitamin and increase other factors such as amino-acids for the growth of LAB (Lyumugabe et al., 2010).  Holzapfel (1997) reported that African opaque beers are typically characterized by a lactic fermentation followed by an alcoholic fermentation in which initially, LAB and later yeasts play the dominant role. Due to their higher growth rate, bacteria typically dominate the early stages of fermentation. Clearly, yeasts grew faster in the wort inoculated with starter of 25 days of storage than in wort inoculated with starters of 5 and 50 days of storage.  At 16 h of fermentation, the maximal value of yeasts count (9.36 log cfu ml-1) was reached in worts inoculated with 25 days starter; whereas in worts inoculated with days and 50 days matured starters, it took 24 h of fermentation to reach the maximum of this value (6.67 and 7.74 log cfu ml-1, respectively) (Figure 3). Similar trends were observed for LAB count. At 16 h of fermentation, the count of LAB in the wort inoculated with the starter of 25 days storage (8.0 log cfu ml-1)  was significantly (p<0.001) higher than values obtained in worts inoculated with  starters of 5 days (5.5 log cfu ml-1) and 50 days of storage (5.5 log cfu ml-1). The use of the starter of 25 days permitted to reduce the fermentation duration to 16 h instead of 24 h. Similar findings were obtained by some authors. Sawadogo-Lingani et al. (2008) tested three kinds of improved starter cultures for dolo (sorghum beer in Burkina Faso) and found a reduction of the fermentation duration. The same with N’guessan et al. (2010) for the tchakpalo (sorghum beer in Côte d’Ivoire) and Orji et al. (2003) for pito (sorghum beer in Nigeria). 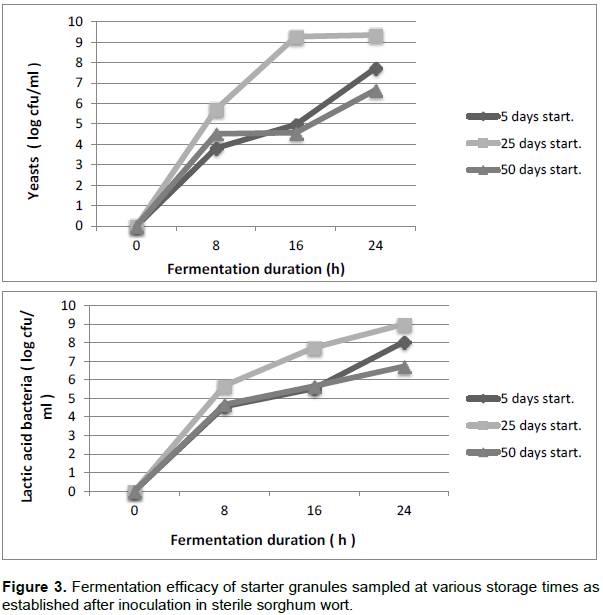 The heat stabilized kpete-kpete, in the form of granules, had preserved physicochemical and microbiological characteristics and functional  properties  better  than  the traditional starter. The improved starter reached its maturation at 25 days of storage where its ability to ferment the sorghum wort was significantly better than that of starters stored for 5 or 50 days. Therefore, the 25 days stored starter could be used to produce a sorghum beer at shorter fermentation time with adequate physicochemical and microbiological properties.