Fungi play important roles, as both decomposers and plant symbionts in mangrove ecosystems. Their ability to survive extreme environmental conditions makes them potential rich sources for recovery of novel bioactive compounds. In this study, biotechnological potential of fungi recovered from the rhizospheres of four mangrove species (Sonneratia alba, Rhizophora mucronata, Ceriops tagal and Avicennia marina) was explored. Rhizospheric sediment samples of the mangroves were collected using standard protocols and different media used for isolation of fungi. A total of 33 fungal isolates were recovered and characterized based on morphological, physiological and Internal transcribed spacer (ITS) gene region analysis. The disk diffusion method was used to evaluate the antibacterial activity of the isolates. Morphologically, the isolates showed different characteristics with regard to color, margin and elevation. Physiologically, all the isolates were able to grow at different pH ranges, ranging from pH 4 to pH 12 and at different temperatures from 20 to 30°C and tolerated sodium chloride up to 7%. Phylogenetic analysis grouped the isolates into two phyla: Ascomycota and Basidiomycota affiliated to different genera; Penicillium, Aspergillus, Talaromyces, Diatrypella, Thielavia, Hypocreales, Paracremonium, Geosmithia, Peniophora, Massarina and Fulvifomes. A total of 17 representative isolates produced inhibition zones against three pathogenic bacterial strains. The findings demonstrate that the tropical mangroves rhizospheres are a rich source of fungi with antibacterial compounds and traits relevant for biotechnological application.

Mangrove forests are considered a dynamic ecotone between  terrestrial   and  marine  habitats (Thatoi  et al., 2013). They occupy about 181,000 km2 worldwide (Jusoff,   2013).  The   mangrove   ecosystems   cover  a quarter of the world’s tropical coastlines and are major drivers for transferring organic matter from land to oceans (Simões et al., 2015). They form a niche with a wide spectrum of microbial diversity with bacteria and fungi constituting 91% of the total biomass of mangrove ecosystems (Simões et al., 2015). Fungi are important soil component as both decomposers and plant symbionts (Liu et al., 2015). They play major roles in ecological and biogeochemical processes, contributing significantly to the degradation of mangrove-derived organic matter (Ghizelini et al., 2012). Similar to other ecosystems, fungi are believed to play an important role in carbon and nitrogen recycling in mangrove ecosystems (Reef et al., 2010). Other studies have suggested that mangrove fungi serve as a source of biologically active natural products (Wu et al., 2016).
Although a considerable number of fungi have been isolated from the mangrove ecosystems from time to time, they were first reported from mangrove roots in Australia (Cribb and Cribb, 1956). Since then, there is still a need for information on mangrove- associated fungi. This is important in order to gain new insight into the fungal communities in mangrove ecosystems, since most studies conducted in these ecosystems have mainly concentrated on bacterial diversity and less attention is given to fungal communities (Simões et al., 2015). Additionally, there is alarming increase of emerging and re-emerging diseases. This is due to newly discovered and constantly evolving pathogens. Considering the potential benefits of fungi, the search for natural biologically active compounds from fungi against pandemics and infectious agents is necessary.
The potential for the recovery of anticancer, antioxidant and antimicrobial compounds makes the prospecting for mangrove fungi important (Thatoi et al., 2013). Mangrove ecosystems are hotspots for morphologically and physiologically diverse fungal groups, considering that the species have adapted to the extreme environmental conditions (hypoxic, fluctuating pH, tidal pressures, high salinity, etc.). Anticancer / antioxidant biomolecules (Bhimba et al., 2012; Prathyusha et al., 2018), and novel enzymes with potential for biotechnological applications have been recovered from fungi isolated from mangroves (Wu et al., 2018). Though an impressive panoply of novel biomolecules have been recovered from mangrove associated fungi, much of the focus has been on endophytic fungi (Guerrero et al., 2018; Kuzhalvaymani et al., 2019), while free-living mangrove fungi remain highly underexplored. The recent discovery of five novel funicone derivatives from Penicillium pinophilum SCAU037 byHe et al. (2019)demonstrates the biotechnological potential of free-living fungi adapted to mangrove sediments. Having in mind  that  plant species and geographical location can influence the diversity of microbes (Wu et al., 2016), this study was designed with an aim of isolating, characterizing and exploring the biotechnological potential of fungi from the rhizospheres of four mangrove species found in Mida creek (a polluted mangrove habitat) and Gazi Bay (a pristine mangrove site).

Site description
This study investigated two mangrove sites (Mida creek and Gazi bay) in Kenya (Figure 1) for the presence of potential biotechnologically relevant fungal species. Gazi bay is located in Kwale County (04°44′S 039°51′E), on the South Coast of Kenya and approximately 55 km south of Mombasa. The Chale peninsula to the East and a fringing coral reef in the South protects the Bay from strong sea waves. The climate is mostly humid and hot and the average annual humidity and temperature are about 95% and 28°C respectively. The total annual precipitation ranges from 1000 to 1600 mm (Lang’at, 2008). Mida Creek is located in Kilifi County (03°34′S, 039°96′E), approximately 25 km South of Malindi town and about 88 km North of Mombasa (Lang’at, 2008). Monthly temperature ranges between 23 and 27°C, with monthly maximum at 34°C in the hottest months and minimum at 20°C in the coldest months. The total annual precipitation ranges from 1000 - 1600 mm (Lang’at, 2008).
Sample collection
Rhizospheric sediment samples were obtained from four mangrove species (Sonneratia alba, Rhizophora mucronata, Ceriops tagal and Avicennia marina) common to the two study sites. Sampling was done in May 2018 according to previously described methods (Wu et al., 2016). Four mangrove trees of each species at intervals of 10 m were selected. For each individual mangrove species, the rhizosphere sediments (~100g) were sampled vertically along the base of the plant at two depths (1-5 cm and 10-15cm), using a standardized core sampler (Giannopoulos et al., 2019). A total of 32 samples (4x4x2) per site were kept in sterile plastic bags, maintained on dry ice in a box before they were transported and stored at -20°C until further analyses was performed at the Laval University, Quebec City, QC, Canada.
Physicochemical analysis of sediment samples
Nutrient analyses of the soil samples for nitrogen, carbon, phosphorus, potassium, calcium, magnesium and sodium were conducted according to standard methods (Brupbacher et al., 1968). Determination of pH and electrical conductivity was done using the calcium chloride method at a ratio of 1:2 using a digital Corning pH meter 140 (Corning Life Sciences, Massachusetts, USA) and electrical conductivity meter type CDM 2d radiometer (Radiometer, Copenhagen, Denmark), respectively. 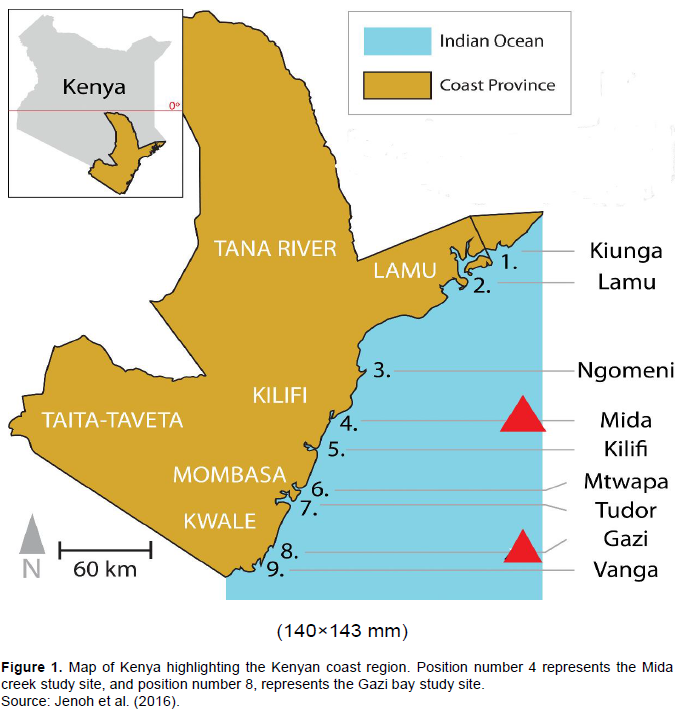 Physicochemical analysis of sediment samples
The pH and calcium were significantly higher (Kruskal-Wallis, p ≤ 0.05) in all mangrove plant species of Mida creek compared to Giza bay, which had significantly higher  electrical conductivity (EC) and salinity values (Table 1). Besides the rhizosphere of R. mucronata, all other mangrove species rhizosphere in Gazi bay had significantly lower (p < 0.05) physicochemical properties compared to the species in Mida creek. The physicochemical parameters that were higher in the rhizosphere of R. mucronata in Gazi bay included potassium, sodium, phosphorus, total carbon, nitrogen, salinity and EC (Table 1).

This study demonstrated that the distribution of culturable fungi in the mangrove ecosystem of Gazi bay and Mida creek is influenced by both plant species and differences in environmental conditions. The recovery of 17 fungal isolates with antimicrobial activity against known bacterial pathogens implies that mangroves rhizospheres are also hotspots for the isolation of fungi with antibacterial potential. Further analysis on the antibacterial activity of the isolated fungi will give more insights on the types of antibacterial compounds produced and their effectiveness as antimicrobial agents.

The authors appreciate the financial support provided by the Queen Elizabeth II Jubilee Scholarship to EMM and NSERC discovery grant to DPK and the International Foundation for Science (Ref No.: IFS Grant A/5719-1) to HMM. They are also grateful to NACOSTI, NEMA, KWS and   KEPHIS   for   approving   the   research  study  and providing permits that facilitated field studies and shipment of samples to Canada. They appreciate the Centre for Forest Research and Institute for Systems and Integrative Biology of Laval University, Canada and Pwani University for their support during the project.