Ralstonia solanacearum causes bacterial wilt of tomato and limits the crop production, and antagonistic microorganisms use to suppress the disease, of which Trichoderma and Pseudomonas species are the most effective agents to control bacterial wilt. In the present study, attempt was made to isolate these two microorganisms to evaluate their effectiveness to control R. solanacearum, the causal agent of bacterial wilt disease of tomato under greenhouse conditions. Thus R. solanacearum, Pseudomonas and Trichoderma spp. were isolated from wilted and healthy tomato plants grown from farmer's field in Ziway and Meki, Oromia Ethiopia. The virulence of the pathogen and the antagonistic effect of the bacteria and fungi were evaluated against R. solanacearum in vitro and in vivo condition. Based on the in vitro results the best two isolates were selected to show their antagonistic effect under greenhouse condition in single and combined designs. The result showed the pathogenicity test of the isolates were evaluated under greenhouse condition, and isolate AAURS1 showed highest virulence (75%) followed by isolate APPRCRS2 with pathogenicity of 50%. With regard to antagonism test, isolates AAURB20 and AAUTR23 showed the highest inhibition against R. solanacearum with inhibition zone of 16 and 15 mm, respectively. Among the treatments co-inoculation was more effective and reduced disease incidence by 13.33% and increased the bio-control efficacy by 72.22% when compared with individual treatment and negative control. The isolates significantly increased the plant height and dry weight by 72.33 cm and 12.18 g, respectively. Thus, the combined use of the biocontrol agents significantly reduced the incidence of tomato bacterial wilt disease. However, their performance should be evaluated using other yield parameters under field conditions to produce healthy tomato seedling to minimize the use of chemicals and reduce  environmental pollution.
Key words: Biocontrol, Pseudomonas, Ralstonia solanacearum, Trichoderma.

Tomato (Lycopersicon esculentum) is the second most important vegetable crop in the world next to potato (Gebisa et al., 2017). The center of origin of Solanum lycopersicum has been localized in the narrow band between the Andes mountain ranges and the Pacific coast of western South and extends from southern Ecuador to northern Chile, including the Galapagos Islands (Peralta et al., 2008). Tomatoes production accounts for about 4.8 million hectares of harvested landarea globally with an estimated production of 162 million tones. China leads world tomato production with about 50 million tones followed by India with 17.5 million tonnes (FAOSTAT, 2014). In Africa, the total tomato production for 2012 was 17.938 million tons with Egypt leading the continent with 8.625 million tones (FAOSTAT, 2014). It is an economically important vegetable in Ethiopia. According to the CSA (2019), the country produced 27,774.538 tons of tomato in 5235.19 hectares of land in 2018.
Ralstonia solanacearum is ranked as the second most important bacterial pathogen among the top ten economically important soil borne pathogens that cause severe yield losses on different solanaceous crops in different parts of the globe (Mansfied et al., 2012). Different studies showed the bacterial wilt pathogen inflict 50 to 100% loss on potato in Kenya (Muthoni et al., 2012), 88% on tomato in Uganda (Katafiire et al., 2005), 70% on potato in India (APS, 2005). It is one of the most destructive and widespread disease of tomato in Ethiopia and its prevalence is as high as 55% in major tomato producing areas of the country (Biratu et al., 2013). Different methods, mainly pesticides are employed to control bacterial wilt of tomatoes.
Chemical controls with Actigard (e.g., acibenzolar-S-methyl) and phosphorous acid effective to control bacterial wilt under at greenhouse and to a lesser extent field conditions (Pradhanang et al., 2005). The use of excessive agrochemicals is negatively perceived by consumers and supermarket chains due to residual chemicals in horticultural products. In addition use of chemical pesticides contaminate groundwater, enter food-chains, and pose hazards to animal health and to the user spraying the chemicals. Consequently, several members of the European Union (EU) (Sweden, Denmark, and Netherlands) decided in the mid-late 1980s to decrease the use of chemicals in agriculture by 50% and ban some of them through time within a 10-year period (Butt et al., 2001).
However, effective and long term control is possible by using a combination of diverse  methods including the use of resistant/tolerance varieties, cultural practices, biological and chemical control as parts of an integrated pest management strategy to control bacterial wilt caused by R. solanacearum (Persley, 1986). The use of biological control agents alone and/or together with other control methods as part of integrated pest management (IPM) practices is widely employed to overcome these problems (Barbari, 2016).
Soil bacteria and fungi which flourish in the rhizosphere of plants and, stimulate plant growth are collectively known as plant growth promoting microorganisms (PGPM). The most abundant and useful microorganisms in the rhizosphere are Pseudomonas, Bacillus, Burkholderia, Agrobacterium, Streptomyces, Trichoderma, Penicillium, and Gliocladium. These microorganisms are used with the aim of improving crop yield by augmenting nutrient availability, enhancing plant growth and protection of plants from diseases and pests (Vessey, 2003). They  are capable of secreting hydrolytic enzymes and causing mycoparasitism on pathogens and narrow spectrum antagonistic activity compared to synthetic pesticides, and thus used singly or in combination with one another and chemicals in integrated pest management (IPM) to suppress plant-pathogens (Handima and Kalaivani, 2014).
Trichoderma and Pseudomonas species are the most frequently isolated fungi and bacteria in all the root ecosystems, respectively. Trichoderma spp. effective in controlling phytopathogens due to their ability to grow toward the hyphae of other fungi, coil around them and degrade the cell walls of the pathogen. Morsy et al. (2009) showed that, the dual application of Trichoderma viride and Bacillus subtilis decreased the percentage of pathogen infection and increased survival rate than single inoculation in tomato. The biocontrol potential of two Trichoderma spp. on sclerotia rot disease of tomato plants in Chile and Iceland was evaluated and the result showed that, Trichoderma harzianum and T. viride reduced the disease by 74.50 and 68.75%, respectively (Kator et al., 2015).
Several studies also showed that the application of these antagonists have a dramatic effect on bacterial wilt disease caused by R. solanacearum on tomato. Narasimha et al. (2013) showed that Trichoderma asperellum (T4 and T8) isolates delayed wilt development by R. solanacearum, effectively decreased the disease incidence (51%), improved plant growth promotion and increased fruit yield  under field conditions.
Another study also showed that Trichoderma spp. AA2 and Pseudomonas fluorescens PFS were most potent inhibiting the growth of Ralstonia species and the field study indicated Trichoderma spp. and P, fluorescens alone were able to prevent 92 and 96% of the infection and combination of both were more effective, preventing 97% of infection compared to chemical control methods that prevented 94% of infection (Yendyo and Pandey, 2017). This shows the promising potential of native isolates of Trichoderma spp. and P, fluorescens as biocontrol agents against Ralstonia spp.
In order to identify successful microorganisms as biocontrol agents, continuous screening of new isolates is needed for effective formulation against specific pathogens. Therefore, this study was initiated with the objective of evaluating the efficacy of Trichoderma and Pseudomonas spp. individually and in combination against bacterial wilt pathogen, R. solanacearum of tomato under in vitro and in vivo conditions.

Cultural and biochemical tests for identification of R. solanacearum
A total of fifteen bacterial isolates were collected from infected tomato plants with bacteria wilt, of which four isolates that showed the typical cultural characteristics of virulent R. solanacearum were selected for in vivo pathogenicity studies (Table 1). These isolates exhibited pink or light red colonies or red center with whitish margin. All of them were rod shaped, Gram negative, non-spore forming, motile, and catalase and oxidase positive and indole negative bacteria (data not shown). These results conformed to the characteristics of virulent strains of R. solanacearum on TZC medium after 24 h of incubation reported elsewhere (Kelman, 1954; Narasimha et al., 2013).
Pathogenicity tests
The result showed that bacterial wilt of tomato occurred within 15 to 21 days after inoculation. All isolates were pathogenic on tomato plants and produced typical symptoms of wilt. Isolate AAURS1 exhibited the highest disease incidence (75% wilting) followed by 50% of wilting with APPRCRS2, whereas isolates AAURS3 and AAURS4 induced weak infection on the host (Table 1). Other reports also showed 50 to 71% wilting on different tomato varieties (Abo-Elyousr and Asran, 2009). El-Ariqi et al. (2005) also reported that different isolates of R. solanacearum caused 52 to 97% of wilting.
Selim et al. (2011) have also reported that different isolates of R. solanacearum showed different wilt incidence ranging from 40 to 96%.
Isolation and screening of plant growth promoting antagonist
A total of twenty rhizobacterial and six fungal isolates were collected and preliminarily screened for their antagonistic property on the test pathogen. They were evaluated against two isolates of R. solanacearum using paper disc diffusion method under in vitro conditions.
The data showed that the bacterial isolate, AAURB20 had the highest mean inhibition diameter of 15 and 16 mm followed by the fungus, AAUTR23, isolate with inhibition diameters of 14 mm against the two test pathogens AAURS1 and APPRCRS2, respectively (Table 2). This implies that the antagonists have potential to be used in the greenhouse for in vivo bio protection of tomato plant. The in vitro antagonistic activity of P. fluorescens was also reported by Alyie et al. (2008) where P. fluorescens isolates (PF20) had the greatest inhibition zone in vitro against R. solanacearum with the inhibition diameter of 14.15 mm and other two isolates (PR-3-I-x, PR-4-I-x) showed 3.2 and 3.5 mm, respectively. This suggests that the mode of action or the type of antibacterial metabolite production may vary among the isolates tested (Williams and Asher, 1996). The inhibitory activity of P. fluorescens against the pathogen in the study is in line with that of Henok et al. (2007), Aliye et al. (2008) and Yendyo and Pandey (2017) where they reported that isolates of P. fluorescens had significantly inhibited under the bacterial growth of R. solanacearum under in vitro conditions.
The in vitro antagonistic activity of T. asperellum wasreported by Narasimha et al. (2013) that inhibit the growth of R. solanacearum with inhibition zone ranging from 11 to 27 mm diameter. 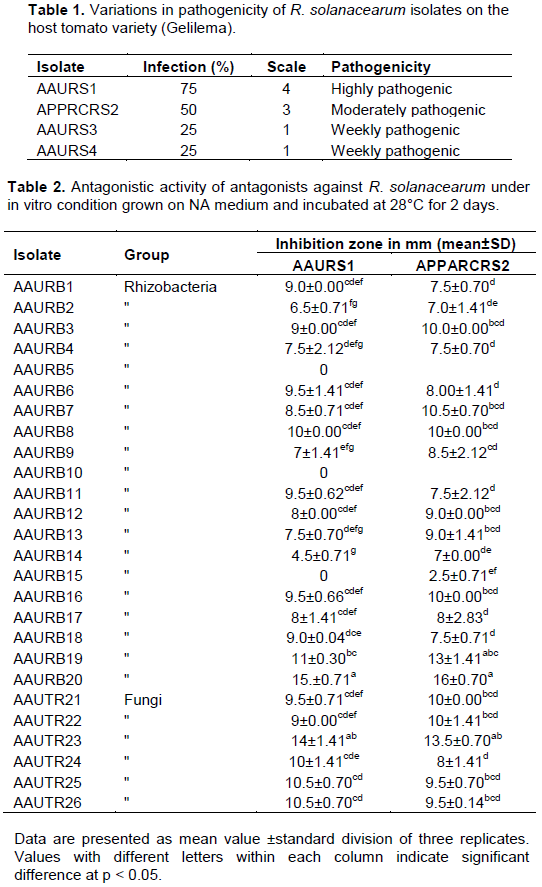 A total of twenty rhizobacterial and six fungal isolates were preliminarily screened for their antagonistic property on the test pathogen using paper disc diffusion method under in vitro conditions. Isolate, AAURB20 gave the highest mean inhibition diameter of 15 and 16 mm followed by the fungus, AAUTR23, isolate with inhibition diameters of 14 mm against the two test pathogens AAURS1and APPRCRS2, respectively.
Based on the in vitro inhibition test and PGB properties, one isolate of Pseudomonas spp. and one isolates of Trichoderma had shown better inhibitory effects on the test pathogen strains selected for green house study. Combined treatments of Trichoderma and Pseudomonas spp. (AAURB20+AAUTR23) showed best performance compared to individual treatments, although individual isolates reduce bacterial wilt incidence and increase biomass of tomato significantly compared to the pathogen inoculated control. Therefore, the use of this bioagent would be important to manage bacterial wilt at greenhouse conditions. However, further study will be required to use the bio-agent in the field condition for bio-control development program.

The author acknowledged Ethiopian Institute of Agricultural Research and Healthy Seedling Project supported by the Ethiopian Biotechnology Institute (EBTI) for financial support and the Department of Microbial, Cellular and Molecular Biology, College of Natural and Computational Sciences, Addis Ababa University, for providing laboratory space and equipment, and technical support to undertake the research work.