The present study aimed to isolate and evaluate the potentiality of some probiotic lactic acid bacteria from infants stool to degrade and reduce cholesterol level in fermentation medium. Out of 50 lactic acid bacterial isolates recovered from healthy infants (3 to 18 months old) stool, two bacterial isolates W7 and Y1 showed highest cholesterol reduction percentage (68.38 and 71.6%, respectively). The cholesterol reduction potentiality by the two isolates W7 and Y1 were optimized to 94 and 98%, respectively, by studying the different cultural conditions; inoculum size, inoculum age, pH, incubation temperature, incubation period and cholesterol concentration. The gas chromatography analysis of the fermentation extract revealed that the resulted end product of cholesterol was 5á-cholestane-3à,25-diol (C27H48O2) of molecular weight 404. The selected bacterial isolate Y1 was identified phenotypically and genotypically as Enterococcus faecium and deposited in GenBank under the accession number KY788356.

Cholesterol is a waxy steroid compound formed in all cells of the animal and human body and  required for formation of steroid hormones (Young, 2001, Rigotti et al., 2003), a precursor for biosynthesis of  bile acids in the liver that help the body to digest fat (Russell, 2003). Longstanding increased serum cholesterol levels may lead to atherosclerosis and as a result lead to development of cardiovascular diseases (CVDs) (Ngongang  et  al.,  2016;  Tsai  et  al., 2016). CVDs were reported to be responsible for 30% of deaths worldwide and predicted to remain the leading causes of death (WHO, 2013). Both pharmacologic and non-pharmacologic approaches, including follow healthy diet, behavior alteration, and regular practice, are common strategies to lower serum cholesterol levels (Dunn-Emke et al., 2001), Although they record cholesterol-lowering ability, but in some cases unwanted side effects can be produced,  such  as gastrointestinal disorder (Davidson et al., 1999).
There are some microorganisms that live as normal flora in animal and human gut, known as probiotics. The presence of these microorganisms in healthy form have different healthy benefits such as protection against gastrointestinal disorder (Vanderhoof and Young, 1998; Niv et al., 2005; Saxelin et al., 2005), reduction of cholesterol level in blood and lipids (Gilliland and Walker, 1990; Naidu et al., 1999), synthesizing extracellular bacteriocins as antimicrobial metabolites (Gill, 2003) and enhancing the immune system by production and circulation of serum antibodies (Maassen et al., 2000; Ezendam and van Loveren, 2006). An adequate quantity administration about 109 CFU per day of external probiotics especially lactic acid bacteria will be appropriate to maximize and balance the human gastro-intestinal microbiota by replacing harmful pathogens and reinforcing the natural defence mechanisms (Casas and Dobrogosz, 2000; Ouwehand et al., 2002). Probiotics for human feeding are preferably isolated from the gastrointestinal (GI) tract of healthy human (Saarela et al., 2000).
Acid-producing probiotics have been extensively used for cholesterol reduction in human blood serum by applying theses bacterial strains in various fermented foods, milk products and beverages (Pereira and Gibson, 2002; Ouwehand and Vesterlund, 2004) and several studies reported the hypocholesterol ability of lactic acid probiotics in vitro or in vivo, especially the strains of genera Lactobacillus, Enterococcus and Bifidobacterium (Pan et al., 2011; Wang et al., 2012; Huang et al., 2013; Hu et al., 2013; Tsai et al., 2016). Lactic acid bacteria of cholesterol reduction potentiality are now available as probiotics to consumers in forms of milk products such as yoghurts and cheese, formulated tablets and lyophilized powders. However, long-term hypocholesterolemic effects requiring continuous research for novel health enhancing probiotic strains from healthy individual origin is still attracting area.
Different mechanisms for cholesterol removal by probiotics have been reported, such as deconjugation of bile salts by bile-salt hydrolase (BSH) (Ahn et al., 2003), cholesterol absorption into bacterial cell membranes (Kimoto et al., 2002), production of short-chain fatty acids (SCFAs) during the probiotics growth (Trautwein et al., 1998), and cholesterol transformation  into coprostanol (Lye et al., 2010). Additionally, several cultural conditions such as media composition, pH, temperature, and inoculum size may change the metabolic pathways by altering pyruvate metabolism and external electron acceptors resulted in different end-products (Axelsson, 1998; Annuk et al., 2003).
The main objective of this study was to isolate new lactic acid probiotic strains of human origin with potential of highly cholesterol reduction and optimize the cultural condition for the cholesterol reduction process in addition to follow the resulted end products formed by the selected bacterial strain. 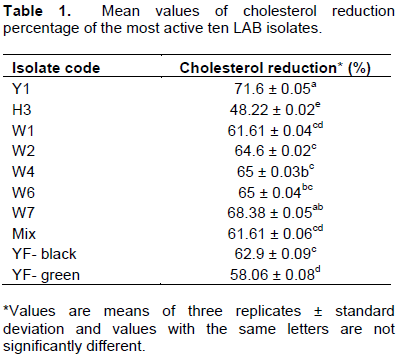 The two bacterial isolates W7 and Y1 were selected as highly cholesterol reducing lactic acid bacteria in the present study and subjected to identification and further experiments. The bacterial isolate W7 was identified as Enterococcus faecalis and published in another study for production of lactic acid by the same authors (Aboseidah et al., 2017), while the bacterial isolate Y1 was identified phenotypically and genotypically in the present study. The results of physiological and biochemical characterizations of the isolate Y1 are shown in Table 2. The obtained results revealed that the bacterial isolate was Gram positive and catalase negative. This isolate was able to tolerate NaCl (6.5%). Also, the bacterial isolate was able to grow at 15 and 45°C. The results also indicated that the isolate was unable to produce CO2 from glucose and NH3 from arginine. The tested isolate had the ability to ferment glucose, mannose, galactose, xylose, maltose, mannitol, lactose and arabinose but was unable to use sucrose and glycerol as a carbon source. Based on the taxonomic characteristics described earlier, the isolate Y1 was assigned to the genus Enterococcus. 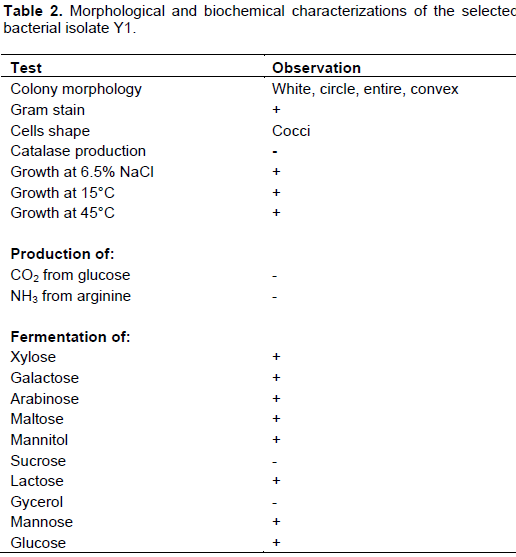 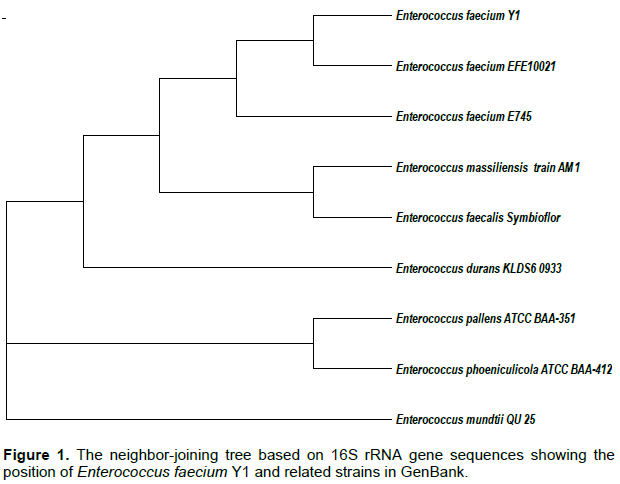 Figure 2 shows the effect of pH on cholesterol removal percentage by LAB isolates. The cholesterol reduction increased gradually with decreasing acidity of cultural medium until it reached maximum (65 and 78.5% for E. faecalis W7 and E. faecium Y1, respectively) at pH 6.5. At basic media the ability of bacteria to remove cholesterol decreased gradually with increasing alkalinity. Therefore, the optimum pH for maximum cholesterol reduction by the two selected isolates was pH 6.5. The study carried out by Kumar et al. (2013) suggested that a neutral pH is best for cholesterol reduction by L. casei LAâ€1. Also, Yazdi et al. (2001) reported that the optimal pH values for cholesterol decomposition are 7.2 for Streptomyces fradiae and 6.75 for Rhodococcus erythropolis ATCC 25544. The optimum production of enzymes required for metabolic process greatly affected by pH as enzymes, being proteins, contain ionizable groups; therefore, the pH of the culture medium affected their structure and function (Lekha and Lomane, 1997). 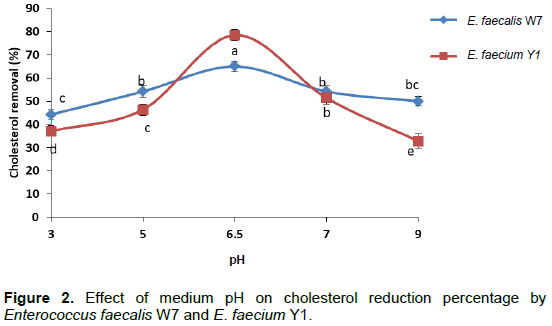 The effect of different incubation temperatures (25 to 45°C) on cholesterol reduction by the two tested bacterial isolates was studied and the obtained results are illustrated in Figure 3. The results revealed that the ability of bacterial isolates to remove cholesterol increased by increasing incubation temperature and reached to maximum values (80.7 and 85% for E. faecalis W7 and E. faecium Y1, respectively) at 37°C and then decreased by increasing temperature. Environmental and nutritional factors are known to influence the growth and decomposition of cholesterol by microorganisms. The optimum temperature for the decomposition of cholesterol in liquid medium by E. hirae was 37°C (Yehia et al., 2015). In contrast, several studies have reported other optimal incubation temperatures, such as 29°C for R. erythropolis ATCC 25544 (Sojo et al., 2002) and 30°C for Bacillus subtilis SFF34 (Lashkarian et al., 2010). The temperature range from 25 to 37°C is optimum for microbial growth and their enzymes activity and as a result maximum cholesterol removal was observed. 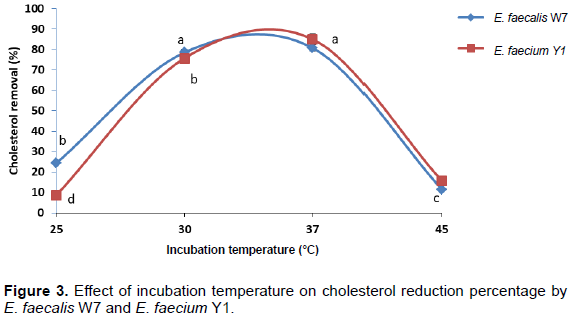 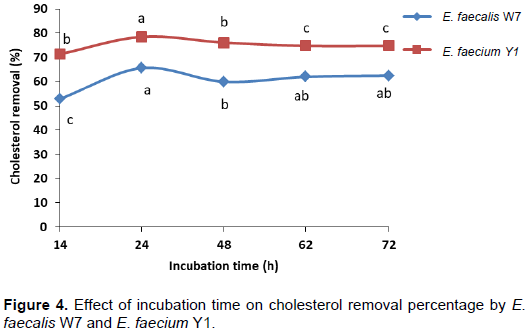 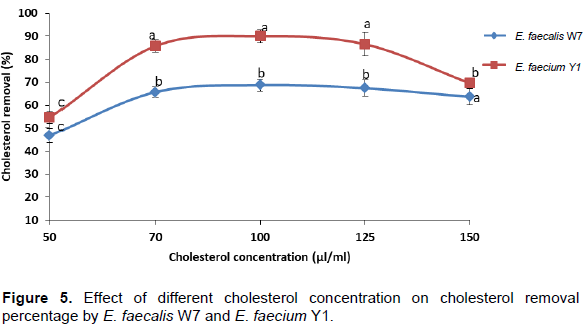 The percentage of cholesterol removal at different growth stages of LAB were recorded in Figure 6. The maximum removal ability of E. faecalis W7 (93.5%) was observed at 42 h inoculum age, but in case of E.  faecium Y1, the maximum removal value (94%) was reached at 18 h. In general, the results revealed that maximum cholesterol reduction was observed during the exponential growth phase and maximum biomass production when the cultures attained the stationary phase in which the medium nutrients is soon depleted and enriched with inhibitory products leading to decrease in bacterial biomass and rate of cholesterol removal (Kumar et al., 2013). 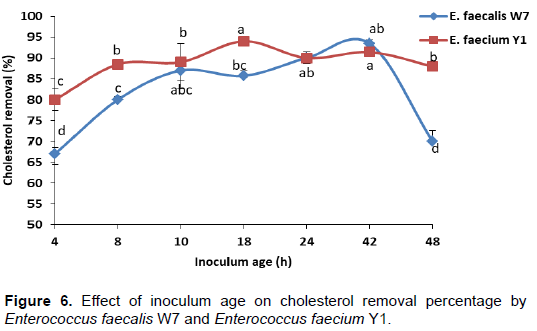 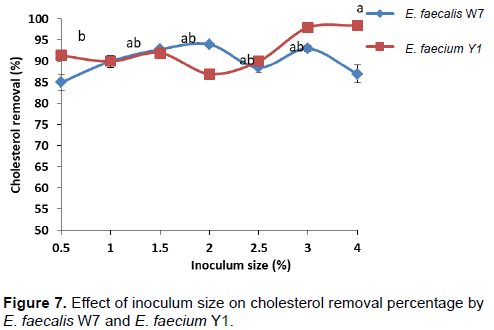 The results of GC-mass spectra analysis of E. faecium Y1 extract at interval incubation time is shown in Table 3. At zero time, the prominent peak was cholesterol which was observed at 51.08 min of retention time, while at 4 h of incubation cholest-5-ene-16, 22-dione, 3á,26-dihydroxy-, 3-acetate, was reported  at 51.09 min of retention time and the peak of cholesterol became less predominant. At incubation time of 8 h, 5á-cholestane-3à,25-diol resulted in the peak at retention time 51.08 and the same result was observed at 24 h of  incubation but by less amount (Figure 8). The  results  indicated that the bacterial isolate E. faecium Y1 transformed cholesterol to 5á-cholestane-3à,25-diol through oxidation and other chemical reactions whereas the reduced amount of cholesterol was utilized by the bacterial cells for its assimilation metabolism. The produced metabolites were ketonic derivatives of cholesterol and this due to transformation of some functional groups of cholesterol giving rise to ketones (Saranya, 2014). These results are in accordance with Suzuki et al. (1986), who reported that some intestinal bacteria such as Bifidobacterium, Eubacterium, Lactobacillus, Enterobacteriaceae, Clostridium and Enterococcus decompose cholesterol via the ChoX enzyme to cholest-4-en-3-one. 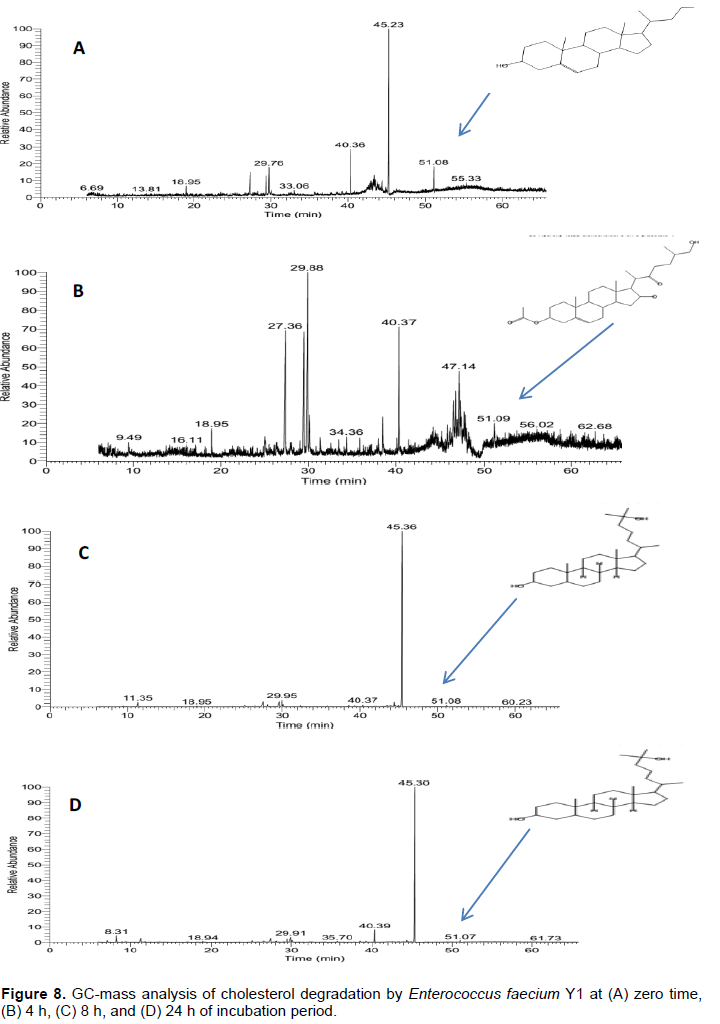 The use of fermented dairy products containing probiotic lactic acid bacteria is considered as one of attractive and effective treatment for hypercholestermia. Therefore, obtaining a novel probiotic strains with cholesterol reducing abilities is required and will be safe alternative for clinical drugs. Consequently, in the present study a total of 50 different probiotic lactic acid bacterial strains were isolated from healthy infants’ stool which showed various cholesterol lowering abilities in culture media. The most active isolates E. faecalis W7 and E. faecium Y1 were selected to optimize cholesterol removal process under different condition. About 90% of cholesterol reduction was achieved by E. faecium Y1 under the optimized cultural conditions in the broth medium. In addition, the end products which resulted from the degradation process were also followed to study their impact when this probiotic strain was applied as cholesterol lowering agent in the dairy products.