The study reported the molecular characterization, antibiotic susceptibility profile and the nature of resistance genes in the multiple antibiotic resistant Pseudomonas aeruginosa isolated from selected hospital fomites and hands of health care workers in Ondo, Nigeria. Various fomites and hands of health care workers were swabbed for the detection of Pseudomonas aeruginosa. Each sample was cultured separately on MacConkey and Centrimide agar plates and incubated for 18-24h at 37oC. Pure isolates were obtained using Analytical Profile Index (API) 20E kit. Kirby Bauer’s disc diffusion technique was used to decide the susceptibility of the pure isolates to known antibiotics. Resistant genes to 3 or more antibiotics were determined by Polymerase Chain Reaction (PCR) using appropriate primers. Two hundred Gram-negative bacterial isolates were recovered from 480 swab-stick samples analyzed out of which 54 were Pseudomonas aeruginosa.  All the P. aeruginosa isolates showed total resistance to augmentin, cefixime and cefuroxime meanwhile 30 were resistant to nitrofuratoin, gentamycin 11, ceftazidime 7, ofloxacin 2 and ciprofloxacin 1. 31 (57.4%) were resistant to three or more classes of antibiotics.  Out of the 12 representative isolates, 6 harboured blaCTX-M (585 bp) gene and were not susceptible to beta lactam antibiotics while 4 of the 7 Aminoglycoside (gentamycin) resistant isolates harboured aac-3-iv (286 bp) gene. In conclusion, different hospital fomites might be possible sources of nosocomial infections.

Nosocomial infections are hospital acquired infections and its severity is due to the level contamination of the hospital environment and the intrinsic characteristics of the organism. They are due to infections with organisms such as Klebsiella  spp., Shigella  spp.,  Escherichia  coli, Acinetobacter spp., Streptococcus spp., Staphylococcus aureus, Enterococcus spp., Proteus spp., Salmonella spp. and Pseudomonas spp (Moti et al., 2018).

A major cause of public health concern is the worldwide dissemination of multi- or extensively drug resistant ‘high risk clones’ of P. aeruginosa, which need urgent attention (Lopez-Causape et al., 2018; Horcajada et al., 2019). The routes of transmission of the pathogen include environmental and patient-to-patient contamination, hands of healthcare workers (after contact with contaminated fomites, and infected patient amongst others. It can also survive on dry fomites from 6 h to 6 month due to its rugged adaptability and survival ability (Pachori et al., 2019; Centre for Disease Control, 2020).

An emerging global health threat are infections caused by P. aeruginosa, which are life-threatening because of their mechanisms for survival, adaptation and resistance to multiple antibiotics classes (Moradali et al., 2017). Also, the organism’s pathogenicity is related to the complexity of its genome and various virulence factors (Maurice et al., 2018).

The ability of P. aeruginosa to colonize a lot of habitats, persistence and prevalence in health care settings and antimicrobial resistance is due to its ability to use diverse responsive mechanisms such as reduced permeability, degrading enzymes, active efflux and modification of the antimicrobial targets (Moradali et al., 2017). It is also innately resistant to a lot of anti-microbials because of its ability to prevent membrane penetration by antimicrobial molecules or to release them if penetration occurs. Some active antimicrobials include: some b-lactams (e.g. ceftolozane-tazobactam, piperacillin tazobactam, ceftazidime-avibactam, ceftazidime, imipenem, meropenem, cefepime and doripenem), fluoroquinolones (e.g. levofloxacin and ciprofloxacin), aminoglycosides (e.g. tobramycin, amikacin and gentamicin) and so on (European Centre for Disease Prevention and Control, 2018).

Selection and collection of samples

Swab stick samples of fomites and hands of health care workers were collected from Mother and Child Hospital, Ondo and State Specialist Hospital, Ondo, Ondo State, Nigeria after approval of ethical clearance with a reference number (MCHO/06/15/002) by the research committee of the institutions.

Identification and characterization of bacterial isolates

Fomites samples were collected using sterile swap sticks and were immediately transported to the Laboratory for identification. Samples collected were streaked on Cetrimide agar for the isolation of Pseudomonas aeruginosa

The P. aeruginosa isolates that were susceptible to commonly used antibiotics were identified using disc diffusion method and the susceptibility test was interpreted following Clinical and Laboratory Standard Institute (CLSI, 2013) guidelines. Discs immersed into concentrations of different antibiotics (gentamycin, augmentin, ceftazidime, nitrofurantoin, ofloxacin, ciprofloxacin, cefixime and cefuroxime (Oxoid Ltd, UK) were carefully inserted on the inoculated Mueller –Hinton agar plate with the aid of sterile forceps and incubated for 18 to 24 h at 37oC. The dimensions of inhibition were taken with a transparent calibrated ruler.

Amplication and detection of PCR products 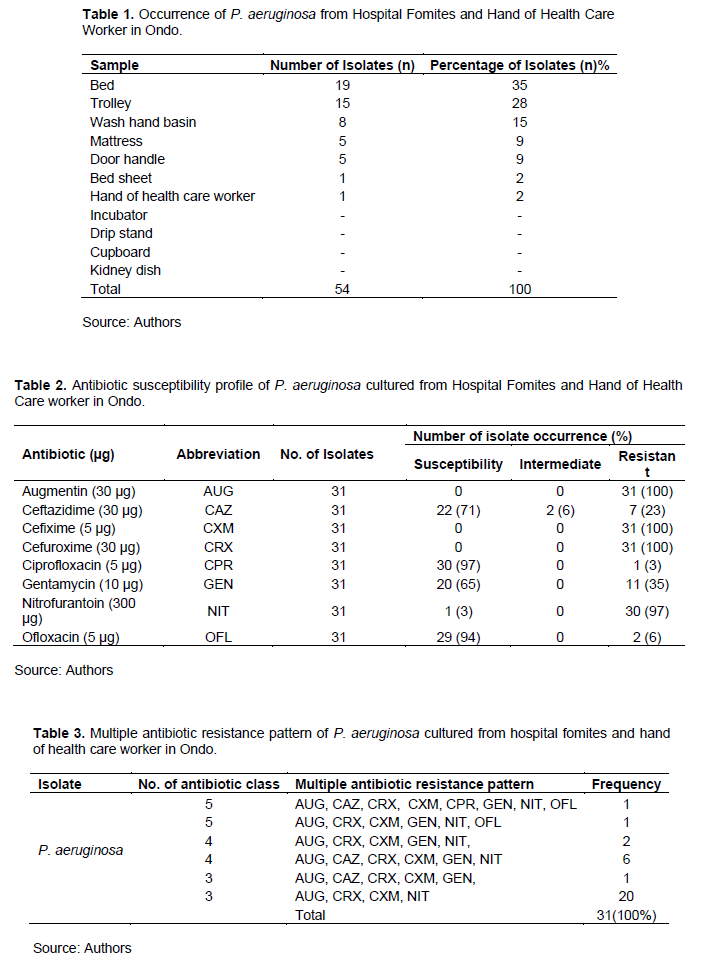 Plate 2 presents the MAR P. aeruginosa that harbor aac-3-iv (286 bp) gene. Four of the 7 representative isolates that were resistant to gentamycin antibiotics are depicted by Lanes 3, 4, 5 and 7 harboured aac-3-iv resistance gene of molecular weight of 286 bp. 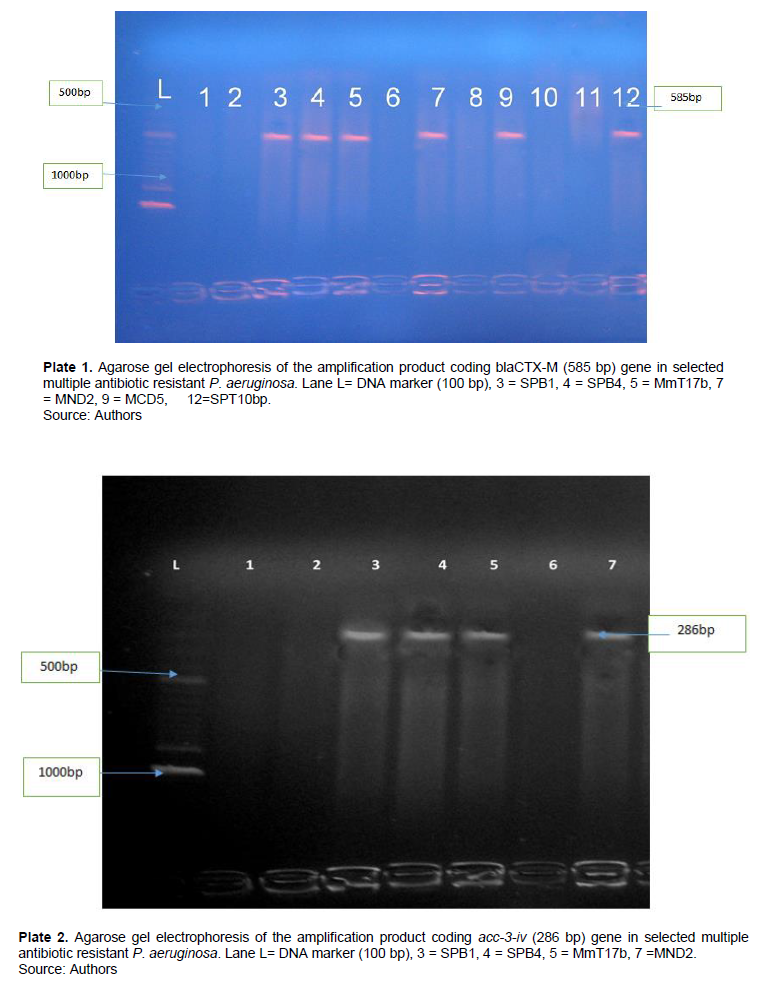 The data obtained from this study revealed that some of the hospital fomites with which body have contact were contaminated with potential pathogens. The recovery of P. aeruginosa  is  an indication of gross contamination which calls for great concern considering the health risks of those that often have body contact with the fomites especially the immunocompromised patients. This is in line with some researchers (Hayden et al., 2006; Carling et al., 2008) who reported various disease causing organisms or nonpathogenic organisms can contaminate different surfaces and medical equipment often used in hospitals.

Thirty one (57.4%) of the 54 isolates of P. aeruginosa was multiple antibiotics resistant. Resistance was seen in three or more different classes of antibiotics. The trend of decreased antibiotic resistance observed in the study agrees with Lewis et al. (2012); Messadi et al. (2008) and Joseph et al. (2013) who earlier reported decreased resistance of P. aeruginosa to Ceftazidime and Ciprofloxacin but different from Senthamarai (2014), Mohanasundaram (2011) and Ibukun et al. (2007) where high resistance against Ceftazidime in their studies was reported.

Antibiotic resistance developed by pathogenic organisms is a global menace and has escalated over the years by the emergence of multi-drug resistant strains among these pathogens (Aslam et al., 2018). Development of resistance to antimicrobial agents by pathogens is a fitness trait acquired to survive in whatever environment they find themselves (Koskella et al., 2011). P. aeruginosa is known to exploit high level of intrinsic and acquired resistance mechanism to bombard quite a lot of antibiotics (Wilkie et al., 2021). A study suggests that the resistance of P. aeruginosa increasesdue to the uncontrolled usage and disposing of antibiotics in the environment. Treatment may fail to recover by constant contact of resistance isolates (Nasreen et al., 2015).

Studies have revealed that unlike some exceptions, the CTX-M enzymes have nearly displaced other extended-spectrum Beta lactamase (ESBLs) enzymes in Enterobacteriaceae, including TEM and SHV ESBL variants (Cantón, 2008; Hawkey and Jones, 2009; Rodriguez-Villalobos et al., 2011). This displacement might have occurred not only as a consequence of the extraordinary dissemination of the corresponding blaCTX-M genes in highly mobilizable genetic platforms, including plasmids and transposons, but also because of these platforms within successful clones (Cantón and Coque, 2006; Rogers et al., 2011; Woodford et al., 2011). Another reason for this increase is the co-resistant phenomenon in CTX-M producing organisms, particularly to aminoglycosides and fluoroquinolones, which might facilitate co-selection processes (Morosini et al., 2006; Cantón and Ruiz-Garbajosa, 2011).

Apart from this general overview, within the CTX-M enzymes, the CTX-M-15 and CTX-M-14 are by far the most important ones, virtually invading all human and animal compartments as well as the environment all over the world (Cantón, 2008; Hawkey and Jones, 2009; Dolejska et al., 2011; Hiroi et al., 2012). Nevertheless, temporal emergence and penetration of these enzymes in different epidemiological scenarios might also explain the current epidemiology of CTX-M enzymes. Antibiotic consumption and dissimilar risk factors in different geographic areas and groups of patients and particularities of different compartments might have also contributed to the current CTX-M scenario (Carattoli, 2008;  Rodríguez-Baño and Navarro, 2008; Rodríguez-Baño and Pascual, 2008; Oteo et al., 2010a; Naseer and Sundsfjord, 2011).

This study showed that the different hospital fomites in the study location may be possible sources of nosocomial infections. It also revealed the presence of resistance genes (blaCTX-M, 585 bp and aac-3-iv, 286 bp) in the multiple antibiotic resistant P. aeruginosa isolates which accounted for the multiple antibiotic resistance observed. The susceptibility pattern of P. aeruginosa to ciprofloxacin (97%), ofloxacin (94%) and ceftazidime (71%) in this study showed the effectiveness of these drugs in the treatment of infections caused by P. aeruginosa.