One hundred and two Escherichia coli strains isolated from healthy broiler chickens collected from April 2012 to November 2014 in seven geographic areas of western Algeria were studied. Susceptibility pattern to 11 antimicrobial agents was determined by disk diffusion method as recommended by the Clinical Laboratory Standard Institute (CLSI). Antibiograms revealed high levels of resistance to quinolones and fluoroquinolones including nalidixic acid (100%), flumequin (86, 27%) and enrofloxacin (84, 31%), and to other antibiotics, notably: tetracycline (92, 15%), trimethoprim-sulfamethoxazol (80, 39%) and amoxicillin (68, 62%). However, a moderate percentage of strains were resistant to neomycin (31, 37%), chloramphenicol (27, 45%) and nitrofurantoin (21, 56%). Only 7, 84% of the isolates were resistant to gentamicin and all the isolates were susceptible to colistin. All isolated E. coli were resistant to at least three antibiotics. 96, 08% and 91, 12% of the isolates were resistant to at least four and five antimicrobials, respectively. Twenty eight antibiotic resistance patterns of E. coli strains were detected, of which 11 were present significantly. The results of this survey indicate very high levels of resistance to quinolones and to other antibiotics in E. coli from healthy broiler chickens in Algeria, and suggested that this reservoir of resistance may affect the therapeutic potential of fluoroquinolones in human and veterinary medicine.

Escherichia coli is a common commensal bacterial species that colonizes the gastrointestinal tracts of both humans and animals, but in debilitated or immune suppressed host or after a trauma or surgical procedures, pathogenic and non-pathogenic strains can cause disease in both groups. It can also easily contaminate food products during animal evisceration at slaughter or during  food manipulation (Wilhelm, 2011). Antibiotics are used for therapy and control of bacterial infections in humans and animals as well as for prophylaxis and growth promotion in food producing animals (Sukumaran et al., 2012). Infections with antimicrobial-resistant bacteria are a great challenge in both human and veterinary medicine. Treatment for E. coli infection has been increasingly complicated by the emergence of multidrug-resistant bacteria. The emergence of E. coli isolates with multiple antibiotic-resistant phenotypes, involving coresistance to four or more unrelated families of antibiotics, has been previously reported and is considered a serious health concern (Maynard et al., 2003). In veterinary medicine, resistance to multiple antimicrobials was found more often in E. coli from broiler chickens as compared to E. coli from other meat producing animals (Sheikh et al., 2012). Increasing acquired resistance to antibiotics is becoming a worldwide concern and the World Health Organization recommended stopping intensive routine use of antimicrobials in production animals in 2007 (Collignon et al., 2009).
Antimicrobial resistant isolates and resistance genes of E. coli can be transferred to humans through the food chain, representing a potential risk for public health (Alexander et al., 2010; Ryu et al., 2012). The main aim of this study was to evaluate the frequency of resistance to quinolones and other groups of antimicrobial agents in E. coli isolates from healthy broiler chickens in western Algeria.

Sample collection
From April 2012 to November 2014, a total of 150 samples from healthy broiler chickens were collected from broiler farms situated in seven geographic areas of Western Algeria including: Mostaganem, Oran, Mascara, Relizane, Chlef, Tiaret and Tissemsilt. Samples were randomly taken from poultry farms and directed to the laboratory for further experimentation.
Bacteriological analysis
Autopsies were performed in the Regional Veterinary Laboratory of Mostaganem, Algeria, and tissue samples from liver, spleen and pericardium were collected. E. coli strains were isolated and identified according to the method previously described by Livrelli et al. (2007). Briefly, for the primary isolation of E. coli, visceral organs were cut into small pieces using sterile scissors. Enrichment was done by seeding cubes in tubes of BHI broth (Pasteur Institute of Algeria) and incubated aerobically overnight at 37°C. A drop of broth  was   inoculated   with  BHI  broth  method  of  exhaustion  on MacConkey agar medium (Pasteur Institute of Algeria) and then incubated at the same time and temperature as described previously. For each sample, one colony with typical E. coli trait was picked and re-isolated on MacConkey agar and the phenotypic identification result was confirmed by classical biochemical testing or using the API 20E system (BioMérieux, Marcy l’Etoile, France).
Antimicrobial susceptibility testing
The antimicrobial susceptibility of all E. coli isolated strains was tested according to the Clinical and Laboratory Standards Institute guidelines (CLSI, 2015). The isolates were tested against a panel of 11 antimicrobials: nalidixic acid (NA, 30 µg), flumequin (UB, 30 µg), enrofloxacin (ENR, 5 µg), amoxicillin (AMX, 25 µg), tetracycline (TE, 30 µg), trimethoprim-sulfamethoxazole (SXT, 1, 25/23, 75 µg), Neomycin (N, 30 µg), gentamicin (CN, 15 µg), chloramphenicol (C, 30 µg), Nitrofurantoin (FT, 300 µg) and colistin (CT, 50 µg). Antibiotic disks were purchased from Bio-Rad (Marnes la Coquette, France). Results were obtained after incubating samples for 16 to 18 h at 37°C and were interpreted according to CLSI previously cited guidelines. E. coli ATCC 25922 was used as a quality control strain.

The emergence and spread of multidrug-resistance, including resistance to first-line treatment drugs, in bacteria from food producing animals is a major therapeutic problem. Two hundred and two E. coli strains isolated from 150 samples from healthy broiler chickens sampled a few days before slaughter were included in this study. The frequency of resistance of each antibiotic tested is shown in Figure 1. In the current study, E. coli isolates showed a high resistance rate to quinolones and fluoroquinolones, notably nalidixic acid (100%), flumequin (86, 27%) and enrofloxacin (84, 31%). Resistance to these antibiotics were far higher as compared to other studies in the same region (Hammoudi and Aggad, 2008; Aggad et al., 2010). But, Moniri and Dastehgoli (2005) in their study of 181 E. coli isolated from healthy broilers in Iran reported also that 100% of the isolates were resistant to nalidixic acid; however, less resistance to fluoroquinolones was observed (Moniri and Dastehgoli, 2005). The high recovery rate of fluoroquinolone-resistant E. coli from broilers in Algeria was troubling, but not surprising, given the routine application of the quinolone (nalidixic acid and flumequine) at subtherapeutic doses for prophylactic and therapeutic purposes in broilers, and the fluoroquinolones (enrofloxacin) for the prevention of early chick mortality and to reduce possible colonization or horizontal  spread  of  pathogens  after  day-old  broiler chicks placement. Another explanation is the selection of nalidixic acid- and/or enrofloxacin-resistant E. coli in parent animals (broiler breeders) and its vertical transmission in poultry production pyramid as suggested by others (Bortolaia et al., 2010; Petersen et al., 2006). Furthermore, pharmacokinetic considerations indicate that the use of fluoroquinolones against a nalidixic acid-resistant isolate may lead to the selection of isolates highly resistant to fluoroquinolones. 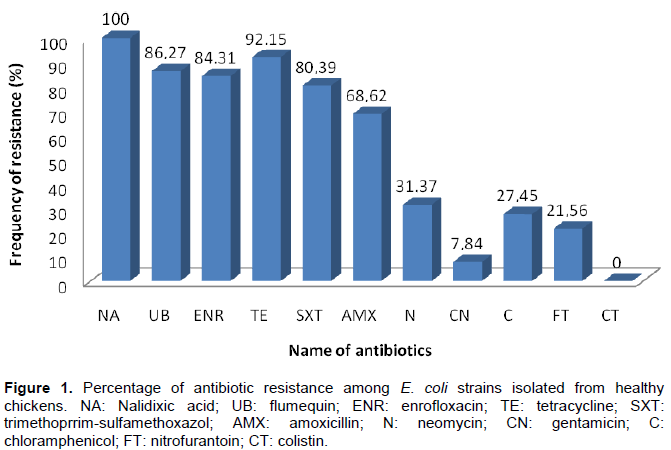 The study also revealed that a high level of resistance to tetracycline (92, 15%), trimethoprim-sulfamethoxazol (80, 39%) and amoxicillin (68, 62%). As compared to other studies in the same region (Hammoudi and Aggad, 2008; Aggad et al., 2010) and to those in other countries (Rahimi, 2013; Jing-Yu et al., 2013). The rate of antimicrobial resistance seems to know a progressive development for these antibiotics. In view of the whole range of antibiotics available in Algeria and the increasing and the lack of legislative restrictions on their use for therapy, prophylaxis, or growth promotion, the globally high incidence of antibiotic resistance observed in this study is not really surprising. In addition, in Algeria, treatments are usually given via the drinking water, and are always applied by the farmers themselves, after provision of the drugs by the veterinarian. Furthermore, precise dosing, an important aspect of the prudent use of antimicrobials, is often more difficult when applying mass medication. However, moderate level of resistance was observed for chloramphenicol (27, 45%) and nitrofurantoin (21, 56%). These results showed relatively lower resistance rates than those in other findings (Zahraei et al., 2006; Saberfar et al., 2008; Zakeri et al., 2012). These antibiotics are prohibited in veterinary medicine in Algeria. The fact of noticing a moderate resistance suggest an illicit use but however, less frequent. Low level of resistance was observed for gentamicin (7, 84%), and all the isolates were susceptible to colistin. Likewise, Aggad et al. (2010) reported a low rate of resistance to gentamicin (3%). In Algeria, gentamicin is actually used only in human medicine. In animals, colistin is used to prevent or treat infections caused by E. coli isolates. Recently, the emergence of plasmid-mediated colistin resistance involving the mcr-1 gene from bacteria was reported in many countries (Olaitan et al., 2016). In Algeria, colistin-resistant E. coli isolates with the associated mcr-1 gene were isolated from poultry. This is worrying because colistin is used as a last resort to treat multidrug-resistant pathogenic infections.
All the isolates examined in this study were resistant to at least three antibiotics (Figure 2). 98 (96, 07%) of the isolates were resistant to at least four antimicrobials and 93 (91, 17%) of the isolates were resistant to at least five antimicrobials. Three E. coli strains were resistant to all antibiotics tested, except colistin. A total of 28 antibiotic resistance patterns were distinguished. The most frequent are those designated in Table 1 as B, D, C and H. The most common multidrug resistant profile among these   isolates    was   profile   D  (21, 56%),  which  was resistant to nalidixic acid, flumequin, enrofloxacin, tetracycline, trimethoprim-sulfamethoxazol and amoxicillin. Chicken may receive different antimicrobial agents in a relatively short period of time, because of the fast growing cycle under field conditions. This may result in an undesireable combination of antimicrobials favouring an increase of antimicrobial resistance. The high prevalence of multidrug resistant E. coli in healthy broiler chickens (sampled a few days before slaughter) observed in this study is also observed by other findings. Dierikx et al. (2013) also observed a high prevalence of multiresistant E. coli in six-weeks-old broiler chickens. This can be explained on one hand by mass medication of whole flock including diseased animals, those assumed  to   be   in   the   incubation   period  and  those considered at risk of infection, and on the other hand by the short growing period of broiler chickens and the short withdrawal period after the cessation of treatment may not provide sufficient time for an adequate reduction of the resistant flora in the animals. Previous studies reported that resistant strains from the gut may contaminate poultry carcasses at slaughter and as a result poultry meats are often associated with multiresistant E. coli (Turtura et al., 1990). Further, a high rate of multiresistant in E. coli fecal isolates from poultry, poultry farmers and poultry slaughterers has been shown in the Netherlands (Van Den Bogaard et al., 2001). Spread of antibiotic resistance plasmids (De Been et al., 2014) or of antibiotic-resistant microorganisms from poultry to humans (Thorsteinsdottir et al., 2010) has been reported. Of special, concern is the detection of high level of resistance to quinolone and fluoroquinolones in healthy broiler chickens. Indeed, fluoroquinolones also may be one of the only alternatives for the treatment of certain human infectious diseases. Furthermore, co-resistance of fluoroquinolones resistant E. coli to other antimicrobial agents, commonly used in human and veterinary medicine, such as trimethoprim-sulfamethoxazole and amoxicillin, is considered a serious health concern. Without an advisable use of antimicrobials, we may be faced with a public health crisis and return to the pre-antimicrobial era. 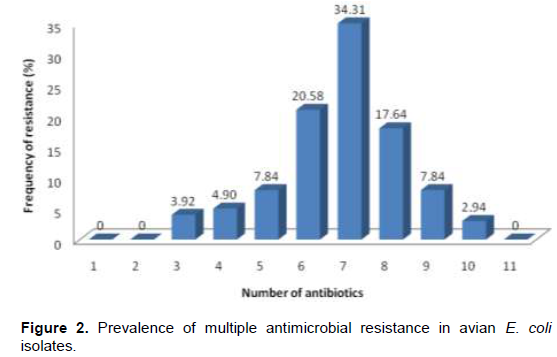 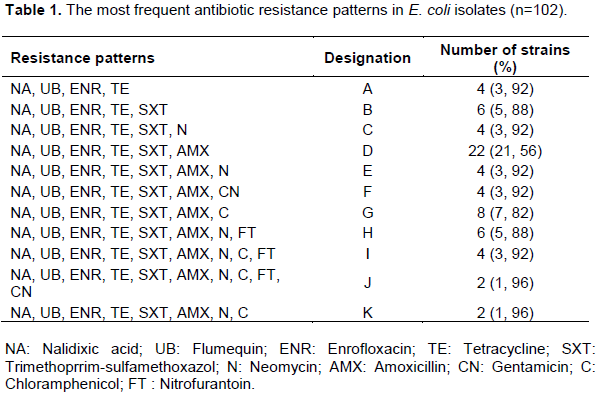 This study highlights the high prevalence of multidrug resistant E. coli among healthy broiler chickens in Western Algeria. These resistant bacteria may be transferred from food animals to humans by various means through the food supply and following contact with animals and their excreta, increasing the risk of treatment failure when this critical antimicrobial class is used in human patients. However, chicken meat represents the first animal protein source for the Algerian citizen; therefore, a tight surveillance of multiresistant bacteria from poultry products, should become a highest priority of the Algerian veterinarian authorities.