The emergence of drug resistance and multiple drug resistance has necessitated the discovery of novel strategies for development of new generation of antimicrobial agents from natural substances for control of microbial infections. Metal nanoparticles have proven to have antimicrobial properties, but the chemical methods used in their production use hazardous chemicals and nanoparticles produced are unstable. In this study, an alternative feasible environmentally friendly method was used for the synthesis of silver nanoparticles using Bridelia micrantha, a Kenyan medicinal plant as a reducing, stabilizing and capping agent. The reaction was done over ultrasonic bath. Formation of the nanoparticles was monitored by visual observation and also by use of UV-VIS spectrophotometer. The synthesized silver nanoparticles had an absorption peak at λmax 431 nm due to plasmon resonance. Energy dispersive X-ray (EDX) analysis showed the synthesized nanoparticles were pure silver. High resolution transmition electron microscope (HRTEM) analysis showed the nanoparticles had non uniform surface and were spherical with an average size of 16.07±3.192 nm. Scanning area electron diffraction (SAED) showed distinct shiny spots, confirming the crystallinity of the nanoparticles. Fourier transform infrared (FTIR) analysis indicated the presence of biomolecules capping the nanoparticles. The silver nanoparticles inhibited growth of Escherichia coli and Staphylococcus aureus. The data from this study will significantly contribute in designing novel methods geared towards development of drugs to combat pathogens by use of silver nanoparticles synthesized in an environmentally and ecofriendly way.

The rise in emerging infectious diseases and their impact in increased incidences of drug resistance is well documented (Weisblum, 1998). Thus, there is a pressing demand  to  discover  novel  strategies  and  identify  new antimicrobial agents from natural and inorganic substances to develop the next generation of drugs or agents to control microbial infections (Taylor, 2013).

Nanoparticles have shown great antimicrobial properties. The unique properties of nanoparticles in the size range from 1 to 100 nm (European, 2011) have made the field of nanotechnology to be one of the most active areas of research in modern material science. The size, shape and morphology of nanoparticles are the vital parameters for the properties and applications of the nanoparticles (Sithara et al., 2017). Different methods have been used in the synthesis of nanoparticles, which can be categorized into chemical, physical and green methods (Ahmed et al., 2016). Chemical methods used are not environmentally friendly as they involve the use of toxic chemicals like sodium borohydride and hydrazine as reducing and capping agents (Arya, 2010). Nanoparticles synthesized via chemical methods have some toxic chemicals adsorbed on the surface that may have adverse effects in medical applications (Geethalakshmi and Sarada, 2010).

Plant extracts (Song and Kim, 2009), fungi (Vigneshwaran et al., 2007), bacteria (Tsibakhashvil et al., 2010), molds (Elgorban et al., 2016), biodegradable polymers and sonicators (Perelshtein et al., 2008)have been used in green synthesis of metal nanoparticles. The green methods of synthesis of metal nanoparticles are rapid, economical, ecofriendly, compatible for pharmaceuticals and can be easily scaled up for large scale synthesis (Mukherjee et al., 2008). Plants contain biomolecules    like     proteins,     alkaloids,     flavonoids, polyphenolic compounds, vitamins, polysaccharides and terpernoids which can reduce, cap and stabilize nanoparticles (Gebru et al., 2013). Plant biosynthesized nanoparticles are more stable and are produced faster than those synthesized by microorganisms (Firdhouse and Lalitha, 2015). Metal nanoparticles have been synthesized via sonochemical method by applying ultrasound radiation (20 KHz to 10 MHz) or use of ultrasonic bath (sonicator) where metal nanoparticles of different sizes are formed (Esmaeili-Zare et al., 2012). The physical phenomenon in sonochemistry involves cavitation and nebulization. In sonication, cavitation involves formation, growth and implosive of a bubble in liquid which creates conditions suitable for synthesis of a wide variety of nanostructures (Bang and Suslick, 2010). Silver nanoparticles of varied sizes, 4 to 56 nm, have been synthesized via sonochemical method using k-carageenan as reducing and stabizing agent at different concentrations (Elsupikhe et al., 2015). Also, ultrasonication has been used to synthesize silver nanoparticles of size 100 nm using citrate as the reducing and capping agent (SkÑ–ba et al., 2018).

Synthesis of metal nanoparticles using different plant extracts and their probable application has been reported (Ashishie et al., 2018; Thakkar et al., 2010). The greatest challenge in the biosynthesis is that, different plants produce metal nanoparticles of different sizes and shapes (Ikram, 2015). Metal nanoparticles of different sizes tend to have different antimicrobial activities. Silver nanoparticles have been reported to exhibit strong antiseptic, antibacterial, antifungal and antiviral properties thus making them to be of great interest in the medical field (Franci et al., 2015). Hence, there was need to evaluate the use of Bridelia micrantha in synthesis of silver nanoparticles and test their antibacterial activity. B. micrantha belong to the family Euphorbiaceae and is known by Kenyan local names as Mukoigo (Kikuyu) and Odugu-Kulo (Luo). B. micrantha is traditionally used in Asia and Africa for treatment of various ailments like bronchitis, anaemia and sexually transmitted diseases (Kokwaro, 2009; Munayi, 2016). A study by Munayi (2016) indicated that B. micrantha can be used in treatment of diabetes mellitus, syphilis, tape worm, abdominal pain, headache, pneumonia, sore eyes and coughs. The analysis of B. micrantha phytochemicals showed that it contains various secondary metabolites like flavonoids, saponins, lignans and triterpenes (Ngueyem et al., 2009). It was thus identified for this research because of the variety of medicinal properties reported including antioxidants and is readily available. There has been no previous reports of B. micrantha mediated biosynthesis of silver nanoparticles (AgNPs).

Stem bark of B. micrantha (Figure 1) was obtained from Manyatta constituency,  Embu  County,   Kenya. The plant specimen was identified by taxonomist from Department of Plant Sciences and voucher specimen deposited at the herbarium in Kenyatta University. 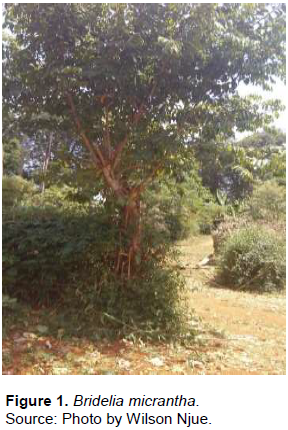 The B. micrantha stem bark was cleaned using distilled water to remove dust particles and any other impurities, then chopped and air dried for two weeks at room temperature. Retsch grinder (Retsch 200 made in Germany), was used to pulverize the bark into fine powder. The plant extract was prepared by mixing 10 g of the dried powder with 100 mL of distilled water then heated for 3 h at 60°C. The extract was filtered using What man filter paper No. 1 to obtain a clear filtrate. The filtrate was then centrifuged for 10 min to remove the fine plant particles. The extract was stored at -4°C for further use.

The synthesis was done by the method described by (Mason, 1997)with some modifications. Sonicator bath (WUC-A03H) of frequency 20 KHz was used to facilitate the synthesis. The plant extract was mixed with 0.001 M AgNO3 solution in the ratio of 1:9 in a conical flask then immersed in the ultrasonic bath until there was no further colour change in the solution.

UV-Vis spectroscopy (Specord 200 Analytik jena) was used to monitor the formation of AgNPs. Scanning was done at regular intervals to check the intensity of the optical density of the absorption band in the range from 400 to 450 nm (Rashid et al., 2013). Water was used as blank.

Measurements were done using  FTIR (Shidmanzu IRt racer-200) to determine the functional groups of biomolecules capping and stabilizing  the  silver  nanoparticles   (AgNPs).   The   sample   was centrifuged at 5,000 rpm for 20 min to obtain a solid at the bottom of the centrifuge tube. The solid was ground with KBr. The solid material was pressed to obtain a pellet, which was used for FTIR analysis.

The size, shape and morphology of the AgNPs were determined by HRTEM (FEI Tecnai F20) . The samples for HRTEM analysis were prepared by drop coating the AgNPs solution onto carbon-coated copper TEM grids (Woehrle et al., 2006).

The antibacterial activity was done using paper disc diffusion technique as per method by Piddock (1990). The test bacterial strains were sub cultured for 24 h. The concentration of the bacteria was determined by comparing its turbidity with McFarland solution. The inoculum (1.5 × 108 colony forming units/ml) was swabbed on the nutrient agar in sterile petri dishes. Paper discs (6 mm) impregnated with AgNPs were placed on the same petri dishes then incubated for 24 h at 37°C. Zones of inhibition were then measured. The magnitude of antimicrobial effect against, Escherichia coli (ATCC No.25922) and Staphylococcus aureus (ATCC No14028) was determined based on the inhibition zone measured (Gebru et al., 2013). The AgNPs exhibiting activity had the minimum inhibitory concentration (MIC) determined. Vancomycin was used as the positive control for S. aureus and Ciprofloxacin for E. coli. Distilled water was used as the negative control.

The reaction mixture of B. micrantha stem bark extract and silver nitrate solution changed from red brown to dark brown in 60 min an indication of formation of AgNPs (Figure 2). 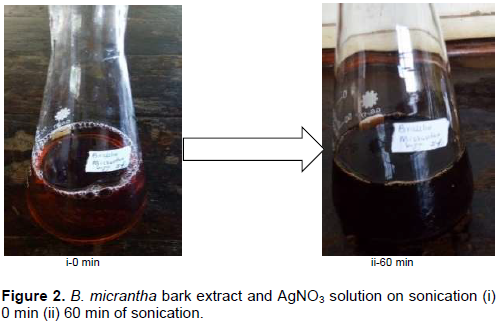 The colour change to dark brown was due to  excitation of surface Plasmon vibrations. This is the combination vibrations of electrons of the AgNPs in resonance with the light wave (Sathiya and Akilandeswari, 2014).

The UV-Vis absorption spectra of the synthesized nanoparticles at different time intervals is as shown in Figure 3. There was a peak at λmax 431 nm. 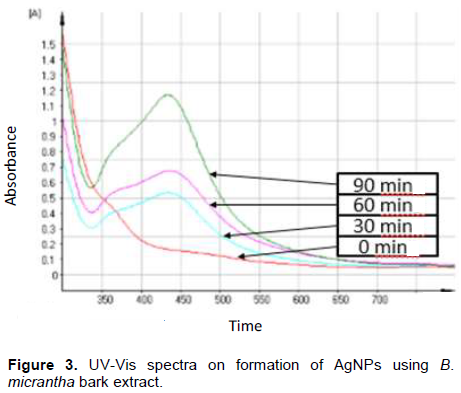 The steady peak at the same wavelength (λmax 431 nm) indicated that, the nanoparticles were mono dispersed in the solution without aggregation. Similar observation was made on the study of photo-chemically grown AgNPs with wavelength-controlled size and shape (Callegari et al., 2003). The optical density increased with time up to 90 min. Increase in optical density of the solution suggested increase in concentration of AgNPs (Maillard et al., 2003).

The high resolution transmission electron microscope of the images of the synthesized silver nanoparticles are as shown in Figure 4. The AgNPs had non-uniform surface and were quasi spherical as  indicated  in  Figure  4.  The particles were evenly distributed. 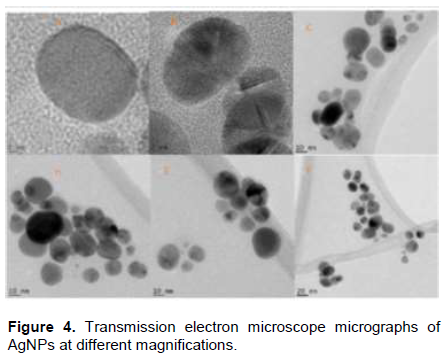 The size distribution of the AgNPs determined from HRTEM analysis are shown in Figure 5. The sizes ranged from 10 to 25 nm with mode range being 14 to 17 nm. The average diameter of the nanoparticles was 16.07±3.192 nm. The narrow range of the size indicated the nanoparticles was monodispersed. 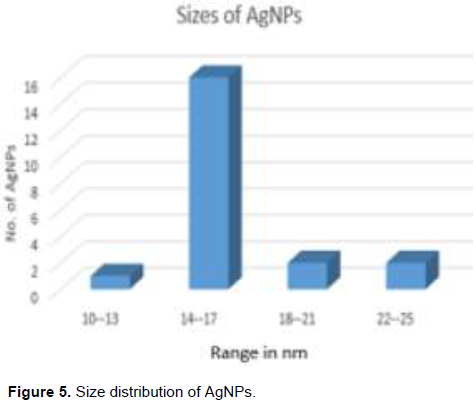 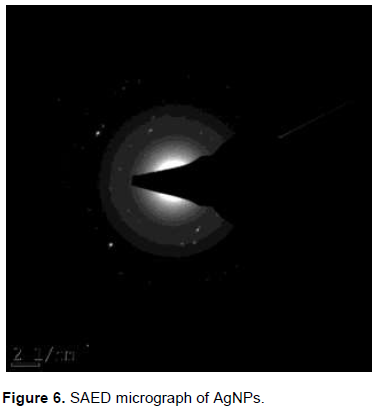 The EDX spectrum as shown in Figure 7 which had overlaying peaks at 3.0 Kev confirming the synthesized nanoparticles was of silver. Similar peaks in EDX spectrum were observed in the study of synthesis of AgNPs using Kigelia africana (Ashishie et al., 2018). 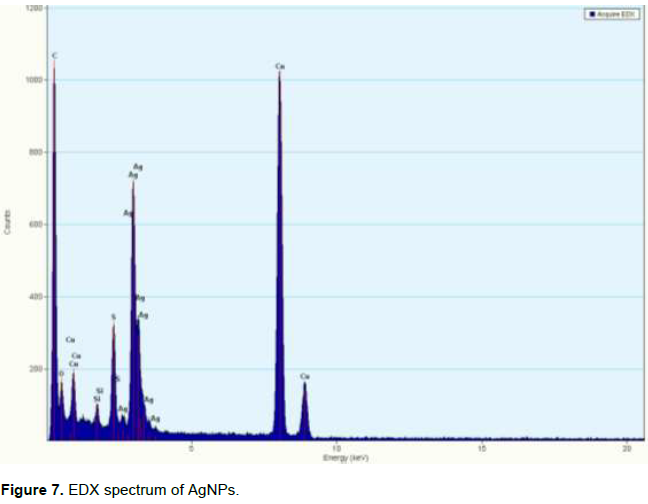 FTIR analysis of AgNPs showed bands at 3433 cm-1 for O-H bond stretching and at 1634 cm-1 corresponding to -C=C- stretching (Figure 8) an indication of involvement of biomolecueles in capping of silver nanoparticles. The functional groups -OH and -C=C- stretching frequencies were probably due to phenolic compounds especially flavonoids. Phytochemical studies on extracts from B. micrantha showed the prescence of phenols (Wilkins and Bohm, 1976). 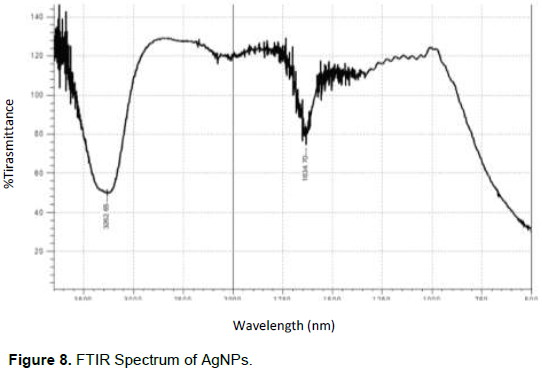 AgNPs from B. micrantha plant extract showed antibacterial activity on both Gram negative and Gram positive bacteria. The zones of inhibition measured after 24 h of inoculation were recorded in Table 1. 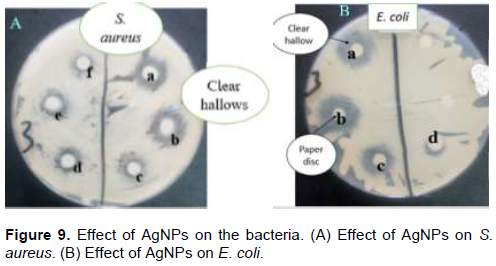 AgNPs were successfully synthesized using B. micrantha extract as reducing as well as capping agent. The method was cheap, ecofriendly and rapid. The UV-Vis spectrometer confirmed the formation of silver nanoparticleas with an absorption peak at λmax 431 nm. The functional groups -OH and -C=C- stretching frequencies in FTIR were probably due to phenolic compounds found in B. micrantha. HRTEM analysis showed that the synthesized silver nanoparticles were spherical, monodispersed with average size of 16.07±3.192 nm. The synthesized nanoparticles showed ability to inhibit the growth of S. aureus and E. coli. They had inhibition zones of 19.05±0.0481 mm for Gram-positive S. aureus and 16.13±0.098 mm for Gram-negative E. coli hence the novel silver nanoparticles synthesized can be used in development of new drugs to fight bacterial pathogens. This is the first report on green chemistry route in biosynthesis of AgNPs using B. micrantha plant extract.

The authors have not declard any conflict of interests.

The author wishes to acknowledge Kenyatta University, Vice Chancellor’s research grant, Department of Chemistry for support of this research and University of North Cape, SA for EDX/ HRTEM analysis.