Phenol discharged into environment during its production or application is a major source of water contamination due to its toxicity and non-biodegradable nature (Liotta et al., 2009; Mohammad et al., 2012). Overexposure of human being to phenol causes severe injuriesto liver, kidney, lungs and vascularsystem (Shawabkeh et al., 2010; Al-Khasman, 2010). As set by Environmental Protection Agency, the maximum permissible limit of phenol in drinking water is 4 mg L-1 (Shawabkeh et al., 2010; Al-Khasman, 2010). Various technologies involving physical (Sun et al., 2011), biological (Basha et al., 2010; Guido et al., 2008; Khazi et al., 2010) and chemical methods (Arjunan and Karuppa 2011) have, earlier, been reported to minimize the concentration of phenol in polluted water. These methods are not advantageous, since they simply transfer pollutants from one phase to another and generate solid waste that requires secondary treatment. Advanced oxidativeprocess(AOP)involvingphoto-catalysis is an efficient, cost effective and clean method for the treatment of water contaminated with organic pollutants prevention (Yan and Sun, 2007; Tao et al., 2012). This process is based on the generation of the strongly oxidizing hydroxyl radicals (.OH), which oxidizes many organic pollutants that could be present in water.

To carry out a photochemical change, charge transfer reaction must compete efficiently with the electron-hole recombination process that takes place within nanosecond. Due to this rigorous reaction, pre-adsorption of charge trapping species (e- acceptors, O2 and e- donors like H2O) are assumed to lead efficient chemical reactions. Sunlight spectrum consists of UV (7 %), visible light (46%) and infra-red (47%) (Bak et al., 2002). Thus, in the recent years, major research focus has been on exploring visible light active photocatalysts.

The NPA was synthesized by chemical oxidative polymerization method (Gospodinova and Terlemezyan, 1998; Shukla et al., 2010; Hirotsugu and Hiromasa, 2011; Srinivas et al., 2012). Typically, 2M aniline (C6H5NH2) and 2M ammoniumpersulphate [(NH4)2S2O8], each prepared in 1 MHCl solution, were mixed in a beaker and by magnetically stirred for 1 h and kept at room temperature for 12 h. The polymer thus formed was filtered out, washed with de-ionized water, and dried at 60°C in oven for 30 min. The product was milled using mortar and pestle and finally kept in a moisture-free atmosphere before its further use. The chemical formula of polyaniline is shown in Figure 1.

The crystal phase and structure of NPAwas determined by X-ray diffractometer (XRD, BRUKER D8) equipped with Cu target for generating Cu, Kα radiation (λ = 0.15406 nm). The accelerating voltage and the applied current were 40 KV and 30 mA, respectively. The instrument was operated under 1 s step scan and 0.020° (2θ) over 4 to 64°. Crystallite size (D) of NPA was calculated by Debye Scherer Equation:

Where, k is shape factorequal to 0.89, θ is the Bragg’s diffraction angle, â is full width at half maximum (FWHM) in radians for the most intense diffraction peak., ë is X-ray wavelength (0.15406 nm) for Cu target Ká is radiation (Srinivas et al., 2012).

To determine the absorption edge of synthesized NPA powder, UV-visible spectra of its 100 mg/L suspension in 1 MHCl was recorded over 200 to 800 nm on a spectrophotometer (SANYO, SP65). Band gap energy (Eg) of NPA was calculated as follow:

Where, λ is absorption edge wavelength in nm.

To determine bond structure of NPA, its 10 mg powder was mixed with one gram KBr and pressed to get a transparent disc in a moisture-free atmosphere. Spectra was recorded over 400 to 4000 cm-1 on a FTIR spectrometer (FTIR-65, Perkin-Elmer).

Aqueous solution (100 ml) of phenol of known initial concentration was mixed with specified amount (typically 20 mg) of NPA in a batch type reactor described previously (Alebel et al., 2015). The suspension was stirred using magnetic stirrer in dark condition for 30 min to establish adsorption-desorption equilibrium between the photocatalyst and the phenol. The reaction mixture was then exposed to radiation (λ = 420 nm) from a xenon lamp (300 W, PLS-SXE300, Trusttech Co. Ltd., Beijing, intensity: 700 mW cm−2) kept 20 cm above the reactor tube. Oxygen gas was bubbled through the reaction mixture at 100 ml/min.

As the reaction proceeded, 5 mL suspension was taken out at regular interval, centrifuged at 6000 rpm for 10 min and filtered through 0.22 mm pore size filter paper. Absorption of clear filtrate was recorded at λ = 600 nm. Percent degradation (R) was calculated with the relation:

Where, A0 and At are absorptions at initial stage and at time‘t’, respectively.

XRD pattern of NPA is exhibited in Figure 2. The observed most intense diffraction peak at 2θ = 21.254° are due to planes of benzinoid and quinoid rings.Shukla et al. (2010) has reported a profile similar to that of NPA in the same synthetic routes. Crystallite size (D) of NPA calculated from Debye Scherer formula, described previously was 37 nm. The observed XRD pattern of NPA reveals aniline hydrochloride (C6H8ClN) with monoclinic structure. However, Srinivas et al. (2012) have reported that XRD pattern of NPA generally differs because of synthetic routes (chemical polymerization, electrio poly-merization, co-polymerization and plasma-polymerization) followed and solvent (HCl, CH3O, etc.) used. 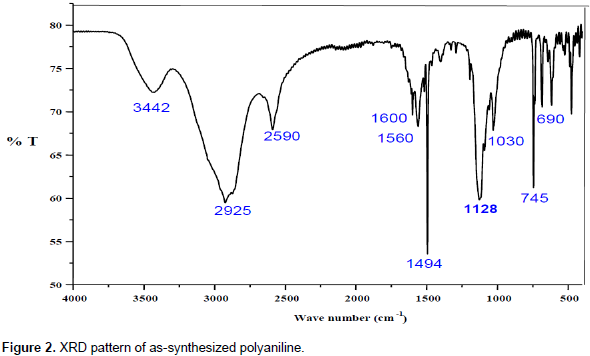 The UV-visible absorption spectra of synthesized NPA are presented in Figure 3. The absorption peaks observed at 328 and 631 nm are due to π–π* transition of benzenoid rings and absorption of the quinoid rings, respectively (Shukla et al., 2010) confirm the NPA emeraldine (aniline hydrochloride). Using the absorption edge wavelength as 631 the band gap energy of NPA was obtained as 1.96 eV which falls well within the visible region of electromagnetic radiation. 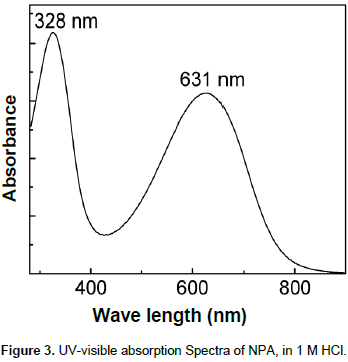 Fourier transform infra-red (FTIR) spectra of synthesized polyaniline (NPA) emeraldine salt is shown in Figure 4. The observed absorptionfrequencies and the corresponding functional group associated with them are listed in Table 1. The recorded FTIR spectra of NPA matched with those reported by Tang et al. (1988) and Vivekanandan et al. (2011). The band observed at 3442 cm-1 is due to N-H stretching and at 2925 cm-cm-1 from C-H stretching. The absorption peak observed at 1600 cm-1 is attributed to C=C stretching in aromatic nuclei and at 1560 cm-1 is due to C=N stretching quinoid. Absorption band at 1494 cm-1 evidenced to C=N stretching in aromatic compounds. Further, absorption at1128 cm-1is from C-H bending vibrations. The remaining peaks at 1030/690 and 745 cm-1 are characteristic of C-C aromatic ring and C-H out of plane bending, respectively. 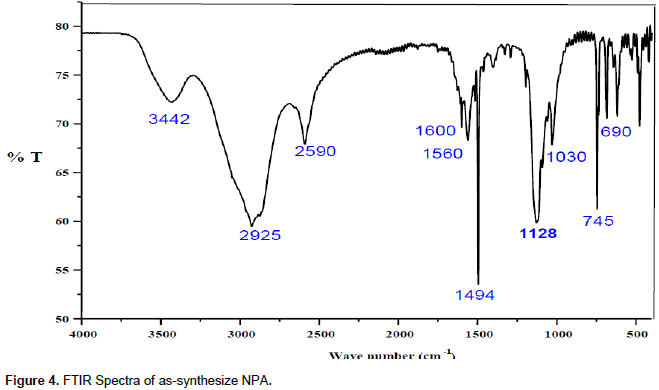 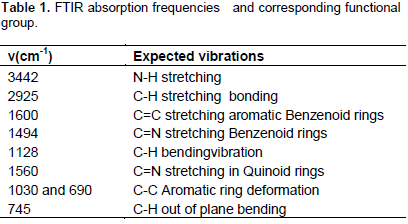 Plot of percent degradation of phenol at 180 min, as a function of NPA load using fixed initial concentration ofphenol and pH, is presented in Figure 5. 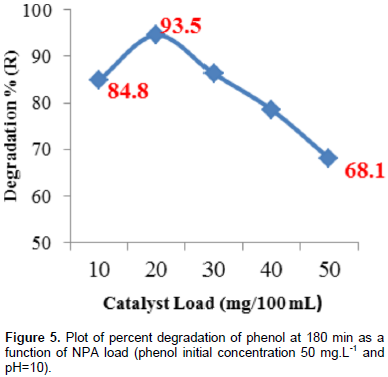 Maximum degradation of phenol (93.5%) was observed at optimum photocatalyst load (200 mgL-1). The observed lower degradationof phenol, using catalystamountless than theoptimum load, may be due to availability of fewer photo-catalyst active sites per substrate (phenol) molecule for photo-excitation. Further, the reason for diminished phenol degradation at higher catalyst load than the optimum value may be (a) decrease in specific surface area of the photo-catalyst duetoagglomeration, therefore, availability of fewer active sites at photo-catalyst surface and (b) diminished penetration of photons to the photo-catalyst surface, due to the screening effect and enhanced light scattering (Goncalves et al., 1999).

Plot of percent degradation of phenol at 180 min as a function of pH at fixed initial phenol concentration and catalyst loadis shown in Figure 6. The desired initial pH of the reaction mixture was maintained using 0.1 M HCl or 0.1 M NaOH solution. Degradation of phenol gradually increases on raising pH from 3 to 10 and then it decreases at higher pH. Least degradation at the lowest studied pH 3 may be due to the competitive adsorption at thephoto-catalystsurfaceof hydrogenions(H+)and similarly charged protonated phenol molecules.As the pH increases from 3 to 10 the OH- to H-+ ratio gradually increases which facilitates the availability of increased number of hydroxyl (OH-) ions required for the formation of photo-catalytic reactive hydroxyl (.OH) radicals. Lowering of phenol degradation rate above pH 10 may be attributed to ion-ion repulsion of negatively charged phenoxide and the deprotonated photo-catalyst surface. 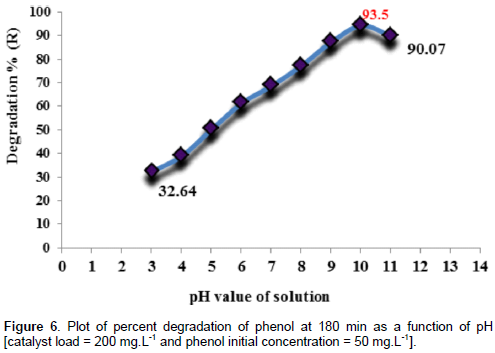 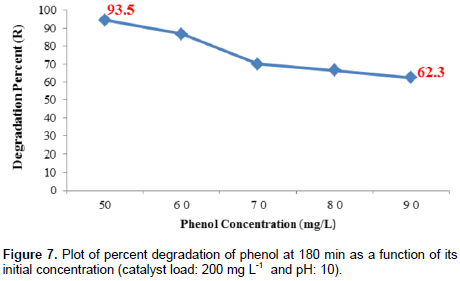 Effects of catalyst and visible light

Where, k is reaction rate constantin min−1, C0 and Ct are concentrations of phenol atinitialstageandattime‘t’, respectively. 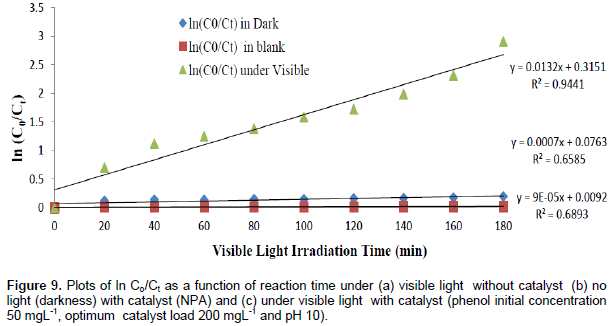 NPA acts as either an electron donor or an acceptor for molecules in its surrounding medium. Degradation of phenol over NPA surface is initiated by the absorption of a photon with energy equal or more than its band gap energy (1.96 eV) producing electron-hole (e--h+) pairs (Step 1). The hole (h+vb) at the valence band is strongly oxidizing and the electron (e-cb) at the conduction band is strongly reducing. The electron-hole pair may either recombine to produce heat (Step II) or may involve in the subsequent redox reactions. The hole (h+) reacts with H2O molecule or hydroxide (OH-) ion to generate •OH radicals (Step-III and Step-IV). Photo-excited electron at the conduction band interacts with the surface-adsorbed oxygen and H+ ion generating hydroxy radicals (•OH) (Steps V to VII). The•OH radicals being strong oxidants, finally, degrade the substrate (phenol) molecules to CO2 +H2O (Step VIII) (Umar and Abdullah, 2008; Liotta et al., 2009) (Table 2).

NPA has been synthesized by chemical oxidative polymerization of aniline. XRD analysis revealed that NPA has crystal size 37 nm with monoclinic structure. Due to its high charge separation efficiency and low band gap energy (1.96 eV) NPA has proved an efficient photo-catalyst for phenol degradation, a serious water pollutant. Using phenol initial conc. (50 mg L-1), as high as 93.5% phenol degradation could be achieved at optimum NPA load (200 mgL-1) and pH = 10. Therefore, NPA may be a promising material for a clean, cost-effective and efficient large scale treatment of water contaminated with phenol.