The industrial application of a vegetable oil is determined by the oil properties. This work was undertaken to alter the properties of Jatropha curcas Kernel oil and possibly find new applications for it. The seed kernels were roasted to different temperatures (140 to 230°C) and the physicochemical properties of the cold hexane and hot water extracted oils were studied. The oil yield, saponification, iodine, acid and peroxide values were affected by roasting temperature and method of extraction and these showed significant difference (p < 0.05). The calculated fuel properties: cetane number and calorific value were improved upon roasting, with cold hexane extracted oils yielding better results. Roasting improved the properties of the oil as diesel substitute but its suitability for use in paints and surface coatings formulation was reduced. The hot water extracted oil showed improved properties for soap production.

Seeds collection
The J. curcas seeds used for this work were collected from trees at different locations in South Western Nigeria. Matured and dried fruits were collected from the plants and the coats and shells were removed manually. About 4 kg of kernels were recovered (Figure S1). This was oven dried at 105°C for 4 h in batches to remove the moisture. The moisture was calculated as the percentage loss in weight between the fresh kernel and the dried kernel. 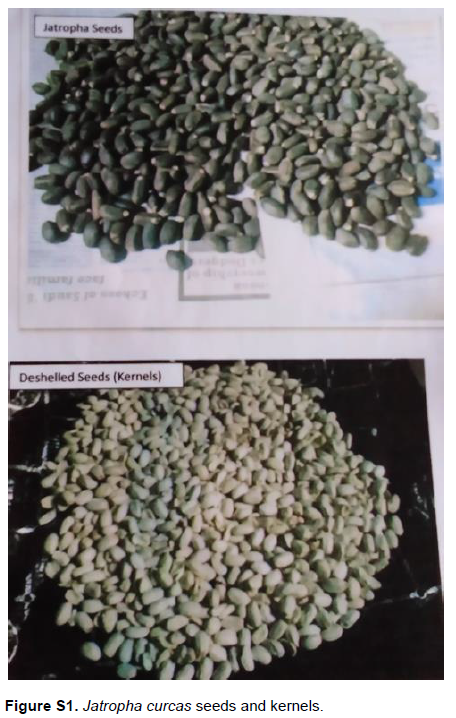 Seed processing
The dried kernels were subjected to different roasting temperatures for 30 min. Three hundred grams (duplicate) were heat-treated in an oven at four different roasting temperatures: 140, 170, 200 and 230°C. The weight loss upon roasting was noted. The roasted kernels were cooled in a desiccator and pulverized using a blender and stored in black polythene bags before oil extraction.
Oil extraction
The oil was extracted using the hot water and cold hexane extraction methods. In the hot water extraction method, 100 g of pulverized kernel was boiled in 700 ml of distilled water (1:7 w/v) for 1 h. The mixture was allowed to cool. The oil floated on the water, while the hydrated cake settled at the bottom. The oil-water mixture was decanted and centrifuged (10,000 rpm, 20°C, 10 min) using Hitachi high speed refrigerated centrifuge (Himac CR 21GII). The oil layer was separated and mixed with excess anhydrous sodium sulphate and centrifuged again to obtain pure oil while sodium sulphate formed a lump at the base.
In the cold hexane extraction, 100 g of pulverized roasted ground kernel was transferred into 200 ml hexane (1:2 w/v) in air-tight glassware. The mixture was left for 16 days with daily mixing. After 16 days, the hexane-oil was decanted. The oil was recovered using a rotary evaporator (BUCHI rotavapor R-210) on a heating bath (BUCHI B-491). The oil recovered was then dried by treating with anhydrous sodium sulphate. The mixture was shaken vigorously and centrifuged (10,000 rpm, 10 min, 20°C) to obtain pure oil. The oil yield was calculated as percentage weight of oil to weight of the kernel flour.
Physicochemical properties
Acid value
Oil (1000 mg) was weighed into 250 ml conical flask and ethanol (10 ml) was added and the flask heated on a steam bath for 3 min. The content was titrated, while hot with 0.112N alcoholic potassium hydroxide using 1 ml phenolphthalein as indicator. The end point was indicated by the appearance of a pink color which persisted for about 30 s. Acid value was calculated as in Equation 1:

56.1 = KOH molecule weight.
Iodine value
To the oil (100 mg), 10 ml of chloroform was added, followed by 10 ml of Wijs (Iodine monochloride) solution. Thereafter, 10 ml of 15% KI was added and shaken vigorously to ensure thorough mixing. This was left in the dark for 1 h with intermittent shaking. To this was added 1 ml of fresh starch solution and stirred. The resulting solution was titrated with sodium thiosulphate (0.1N). The iodine value was calculated as in Equation 2:

126.9 = gram-equivalent of iodine.
Saponification value
Oil (500 mg) was transferred into a conical flask and 7.5 ml of 0.475N KOH solution was added. This was refluxed for 60 min and cooled before 4 drops of phenolphthalein was added. The resulting mixture was titrated with 0.482N HCl until the pink color disappeared. The same process (but without the oil) was conducted to determine blank. Saponification value was calculated as in Equation 3:

Peroxide value
Oil (500 mg) was weighed into a 250 ml quick-fit glass stoppered conical flask and  5 ml  of  acetic  acid-chloroform  mixture  (3:2 v/v) was added and the content of the flask was swirled before it was carefully warmed on hot plate for 30 s. 0.5 ml of saturated KI solution was then introduced and the flask was stoppered and swirled for 1 min. After this time, 30 ml of distilled water was added and the mixture was shaken vigorously to liberate the iodine from the chloroform layer. The mixture was titrated with 0.1N sodium thiosulphate until the amber color lightens before 1 ml of 1% starch solution was added as indicator. Titration was continued until the blue coloration that appeared upon introduction of starch disappeared from the aqueous layer. The peroxide value was calculated as in Equation 4:

Statistical analysis
One way analysis of variance was used to compare means of values. Values are considered statistically different at p < 0.05.

Moisture content and loss upon roasting
The loss on drying at 105°C for Jatropha curcas Kernel was 6.8±0.04%. This loss is attributed to moisture. Jongschaap et al. (2007) has reported a value of 5% for Jatropha curcas Kernels.  Roasting resulted in a gradual increase in weight loss (3.10 to 4.14%) with increase in temperature from 140 to 200°C (Figure 1). There is no statistical difference (p = 0.78) in weight loss between 140 and 230°C. This loss is attributed to thermal decomposition and loss of some volatile constituents of the kernel. 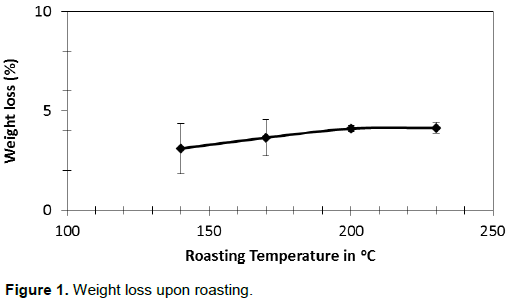 Oil yield and appearance
Figure 2 shows that the oil yield increased with roasting temperature and was maximum at 200°C (13.7%, cold hexane and 6.3%, hot water). However, the yield declined above 200°C. This could be as a result of destruction or disruption of the oleosomes to release more oil. The decrease in oil yield observed above 200°C might be as a result of  decomposition  of  the  oil.  Yields obtained by these methods are very low compared to 66.4% obtained by soxhlet extraction (Adebowale and Adedire, 2006). This indicates a good percentage of the oil could not be extracted. The unroasted kernel oils were light yellow, while the oils from roasted kernel appeared deeper and darker (Figure S2). The deeper color at very high temperatures could suggest some seed decomposition products were extracted. The oils from cold hexane extraction appeared more viscous than those from hot water extraction. 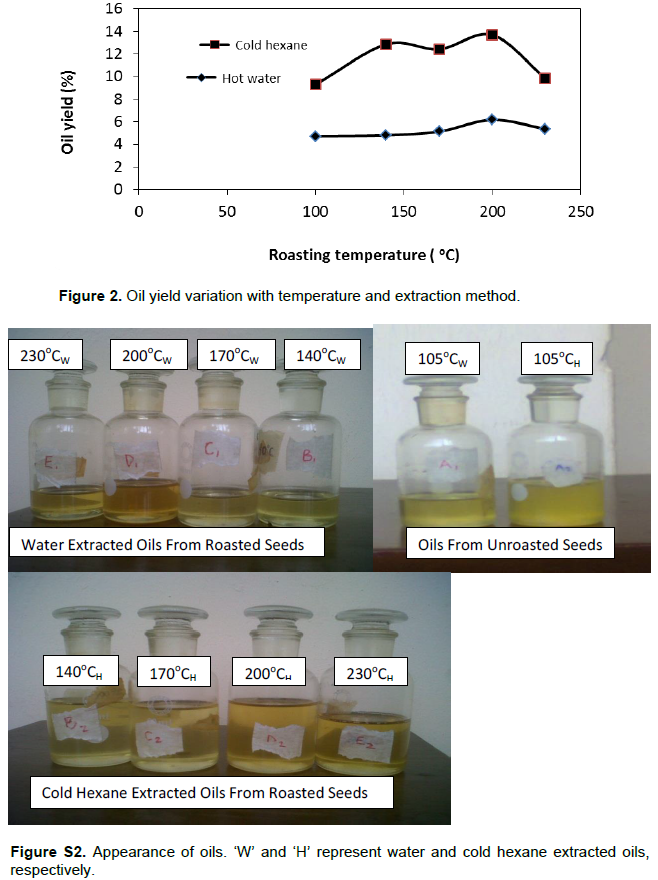 Acid value
The cold hexane extracted oil showed a decline in acid value from 6.45 to 2.72 mg KOH/g of oil as temperature increased from 105 to 230°C, while for hot water extracted oil it was relatively unchanged (~2.24 mg KOH/g oil at 105 to 170°C and increased at 200°C (3.98 mg KOH/g oil) and then decreased (Figure 3). The acid values showed significant difference (p < 0.05) with method of extraction. The obtained acid values in this work 2.24 to 6.45 mg KOH/g of oil are in the range of values 0.6 to 36.46 mg KOH/g reported for Jatropha curcas oil (Akbar et al., 2009; Akintayo, 2004; Foidl et al., 1996; Sarin et al., 2010; Joshi et al., 2011a; Cheng-Yuan et al., 2012). Acid values of many edible oils are less than 3.0 mg KOH/g of oil (Bello et al., 2011; Akubugwo et al., 2008; Akubugwo and Ugbogwu, 2007). While edible oils may have low acid values, the decreased acid values obtained upon increased roasting temperature in this study does not necessarily imply edibility of the oil as no validation study of such was carried out. However, this could be indicative of reduced toxicity. For example, curcin, a toxicant commonly found in J. curcas seed, is a ribosome inactivating protein which like most proteins could be denatured or experience loss of function at high temperatures. Also, high temperature of 260°C and 3 mbar has been reported to completely degrade phorbol esters present in J. curcas (Makkar et al., 2009). 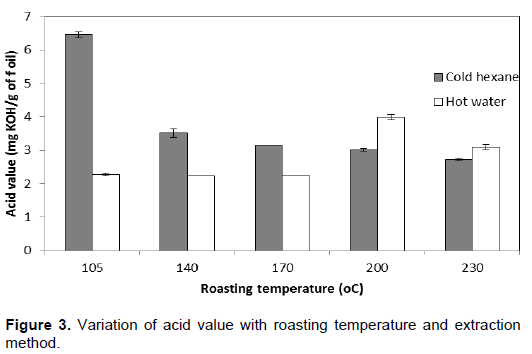 Iodine value
Generally, increase in roasting temperature caused a decrease in iodine value (degree of unsaturation) (Figure 4) and these values varied significantly (p < 0.05) with method of extraction. A possible reason for this trend is the oxidation of the fatty acids at the points of unsaturation. This decrease is more pronounced in oils extracted with cold hexane than hot water. This indicates that roasting of Jatropha kernels reduces the drying property of the oil and suitability for use in paints, varnishes and polishes industries.  The iodine values of the unroasted oils are 100.2 mg I2/g of oil and 115.5 mg I2/g of oil for water and cold hexane extracted oils, respectively; this places them in the range of semi-drying oils. These values are consistent with 92 to 106.6 mg/g reported for J. curcas oil in the literature (Akbar et al., 2009; Akintayo et al., 2004; Foidl et al., 1996; Sarin et al., 2010; Pramanik, 2003). 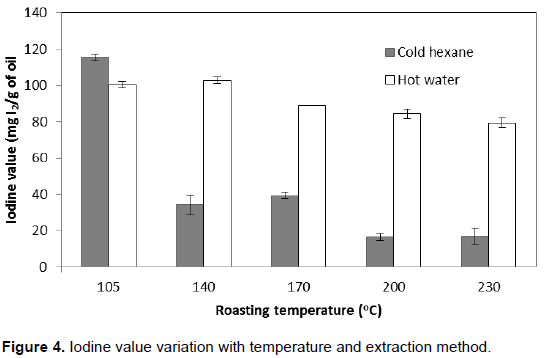 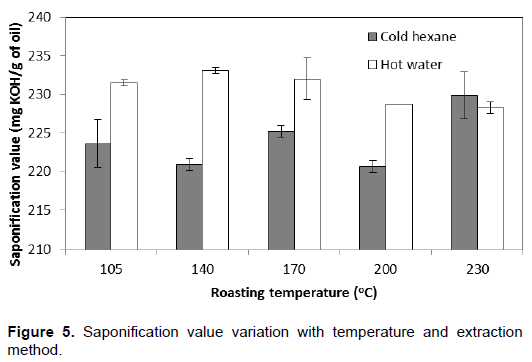 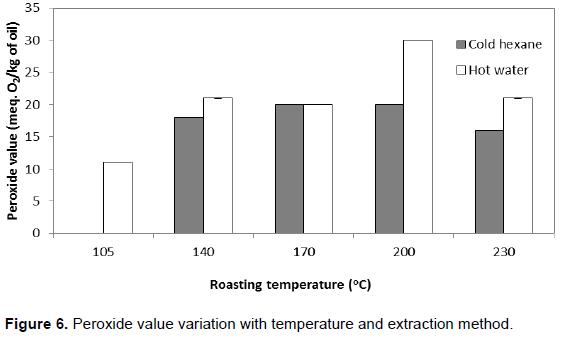 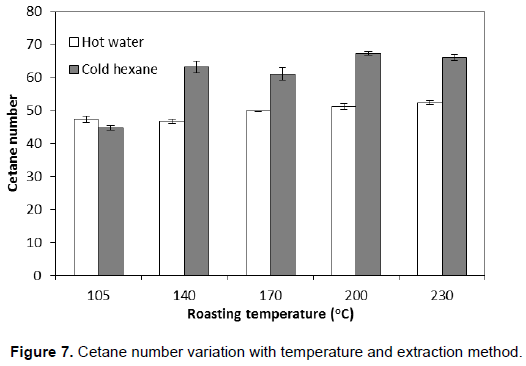 Calorific value
The higher the heating value or calorific value, the more energy released per unit mass of oil (Gopinath et al., 2010). The heating values of oils from both extraction methods increased with increase in roasting temperature (Figure 8). This suggests decrease in unsaturation as roasting temperature increased. Oils extracted from kernels using hexane will release more heat upon burning than their corresponding oils obtained using water extraction. The heating values for oils extracted by the different extraction methods from kernels roasted a 105°C did not show any significant difference (p = 0.62); however, those extracted from samples roasted at higher temperatures differed significantly (p < 0.05). The obtained values in this work: (38.5 to 40.1 MJ/kg for oil extracted using cold hexane and 38.3 to 38.9 MJ/kg for hot water extracted oils) are consistent with those reported in the literature (38.2 to 39.66 MJ/kg) (Karaj et al., 2008; Pramanik, 2003).

Roasting temperature has significant effect on iodine values of cold hexane extracted oils, potentially making them a more desirable feedstock in surface coating applications. Also, extraction method (hot water extraction) slightly improved the oil’s potential  for  use  in soaps and shampoo production. Oil yield was highest in the kernels roasted at 200°C for the two extraction methods employed. Increase in roasting temperature slightly improved both ignition quality and the energy released on burning a specific mass of oil. However, the stability of J. curcas oil to oxidation and the degree of unsaturation of the fatty acids decreased with increase in roasting temperature as reflected in the peroxide and iodine values.