Comparative study on the effect of bio-slurry and inorganic N-fertilizer on growth and yield of kale (Brassica oleracea L.)

Kale is one of the nutritious leafy vegetables with a high nitrogen fertilizer requirement. However, soil fertility is declining progressively due to the imbalanced use of inorganic fertilizer. Discharging bio-slurry as waste will lead to environmental pollution and disposing will also lead to costs because of its large volume. Consequently, replacing chemical fertilizers with bio-slurry can not only achieve efficient resource utilization and disposal cost, but also reduce the amount of chemical fertilizer used and environmental pollution attributed by chemical fertilizers. Therefore, a pot experiment was conducted in a mesh house at Hawassa College of Agriculture to evaluate the combined effect of bio-slurry and inorganic nitrogen fertilizer for growth and yield performance of kale. Five combinations of liquid bio-slurry and inorganic nitrogen fertilizer were used, that is, 25% bio-slurry + 75% nitrogen, 50% bio-slurry + 50% nitrogen, 75% bio-slurry + 25% nitrogen, 100% bio-slurry, 100% nitrogen and 0 use of either fertilizer source as a control. Data on phenology, growth and yield attributes were recorded. Results revealed that the treatment had significant effect on growth and yield attributes of kale. The highest (455.10 g) leaf fresh weight and fresh biomass (814.86 g) was obtained when 100% sole application of liquid bio-slurry was used. Based on these results, it can be concluded that application of 100% bio-slurry can improve the production of kale in the study area.

Green leafy vegetables occupy an important place among the food crops as they provide adequate amounts of many vitamins and minerals for humans (Fasuyi, 2006; Chinma and Igyor, 2007). Kale (Brassica oleracea L.) is one of the highly nutritious green leafy vegetables which belong to the Brassicaceae family, along with Cabbage, Collards and Brussels sprouts (Fadigas et al., 2010). Kale is a heavy feeder of nitrogen and therefore, good nitrogen source is a paramount importance to optimize its economic yield (Onyango et al., 2012). However, soil fertility is declining progressively due to the imbalance use of inorganic fertilizer and loss of nutrient from the  soil. Moreover, in the tropical countries including Ethiopia, high cost, scarcity, nutrient imbalance in the soil and soil acidity are problems associated with the use of inorganic fertilizer while bulkiness, low nutrient quality and late mineralization are the bottleneck to the sole use of organic manures for crop production (Uyovbisere et al., 2000). Moreover, alternative soil nutrients sources are expensive for small-scale farmers and the poor timing and awareness of application for improved productivity of kale (Onwonga et al., 2013).
Organic materials are important soil amendments that sustain the productivity of soils in tropical and subtropical regions where there is low soil organic carbon content and low input of organic materials (Huang et al., 2010).  Therefore, there is an urgent need to identify and investigate a cheap, easily available, environmentally friendly source of fertilizers to enhance balanced supply of crop nutrition, sustainable nutrient availability, treat soil acidity and thereby maximize the yield of leafy vegetables. In this regard, bio-slurry can play a vital role in combination with chemical fertilizer and it seems that there is a general consensus on the ability of bio-slurry to improve the physical and biological quality of soil besides providing macro and micro-nutrients for vegetables. At the same time it prevents adverse environmental impacts of urban wastes and reduces the dependence on chemical fertilizers (Karki, 1997). In Ethiopia, evidence is lacking on the combined effects of bio-slurry and inorganic nitrogen fertilizers on growth and yield of kale. Therefore, the present study was designed to find out the optimum combination of bio-slurry and inorganic nitrogen for better growth and yield performance of kale.

A pot experiment was conducted under mesh house conditions in 2017 at the experimental site of Hawassa College of Agriculture. The site is located at 273 km from the capital Addis Ababa. It is found at an altitude of 1669 masl and 7°4' N latitude with 38°31' E longitude. The annual rainfall ranges from 900 to 1100 mm and mean annual temperature is 19.5°C. Experimental soil at a depth of 0 to 30 cm was collected from the teaching and research farm of Hawassa University. A 3 kg of sieved (2 mm sieve) soil was filled in the bucket perforated at the bottom to allow air and water movement. The pots were placed on saucers to avoid treatment contamination and leaching and also the leached water on saucers were reapplied on the experimental pots accordingly. Local cultivar of kale seed and liquid bio-slurry were collected from Ziway market and Hawassa town, respectively. Treatment wise liquid bio-slurry was incorporated on the prepared soil containing experimental pot a week before sowing and split application was carried out for the inorganic N (at the time of thinning and 1 month after emergency). Treatment having five recommended combinations of bio-slurry and inorganic N fertilizer with control treatment were used. The treatments were adjusted based on the N recommendation (100 kg/ha N) for brassica species. The details are presented as follows: T1 - Control (where no urea/Bio-slurry applied); T2 - 25% N by Bio-slurry + 75% N by recommended dose of inorganic fertilizer; T3 - 50% N by Bio-slurry + 50% N by recommended dose of inorganic fertilizer; T4- 75% N by Bio-slurry + 25% N by recommended dose of inorganic fertilizer; T5 - 100% N by Bio-slurry; and T6 - 100% N by recommended dose of inorganic fertilizer.
The treatments were arranged in complete randomized design (CRD) with three replications. The experiment has six level of N source including control treatment. In each treatment there were two pot and two plants per pot with a total of 4 plants per treatment in each replication. Following the usual media preparation practice the pot was conventionally filled with 3 kg of 2 mm sieved soil a weeks before planting. Seeds (15) were sown directly on each pot at a depth of 1 cm and thinning was conducted until it remains two plants per pot just before inorganic N treatment was applied. In accordance with the specifications of the design, each treatment was assigned randomly to the experimental units. Recommended cultural practices (watering, thinning, cultivation and weeding) were applied uniformly throughout the growing period (Haile et al., 2017; Mbatha, 2008; Onwonga et al., 2013). Data on phenology, growth and yield parameters of kale were recorded. Phenology: days to emergence; growth parameters: plant height (cm), number of leaves per plant, leaf area (cm2), leaf area ratio (cm2/g), specific leaf area (cm2/g); yield parameters: leaf fresh weight (g/plant), leaf dry weight (g/plant), total fresh biomass and total dry biomass (g/plant) was recorded (Mbatha, 2008; Li et al., 2013; Amanullah et al., 2007). The data recorded for each of the parameters considered in this study were subjected to analysis of variance (ANOVA) using a General Linear Model in SAS software and mean separation was made based on LSD at 5% (P<0.05) level of significance (SAS institute, 2002). 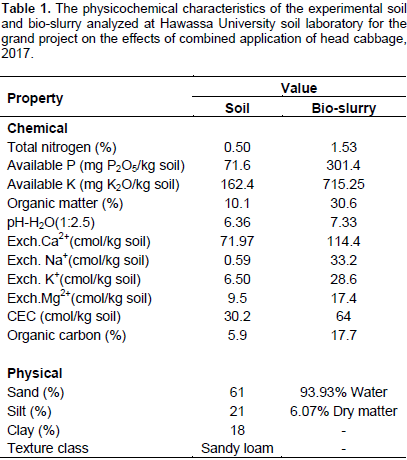 Phenology and growth parameters
Days to 50% emergence
The days to 50% emergence were not significantly (P<0.05) influenced by the combined application of bio-slurry with inorganic nitrogen (Table 2). The result is in contrary to the findings of Vaithiyanathan and Sundaramoorthy (2016) who noted that application of recommended doses of organic manures, inorganic fertilizers and bio-fertilizers increased the seed germination percentage of Green Gram.

Results from the present study showed that the application of bio-slurry as a nitrogen fertilizer stimulated the growth and yield of kale. From the current results, it can be concluded that, growth and yield of kale improved with 100% sole application of bio-slurry. Therefore, this treatment can be suggested for better growth, yield and yield attributing characteristics of kale for Hawassa and areas having similar agro-ecologies.