Rice husk extract (RHE), bamboo extract (BE) and wood extract (WE) at different concentration levels (0.0, 0.1, 0.5, 1.0 and 1.5%) were evaluated (in completely randomized design) in vitro as an antagonist to mycelial growth of selected fungal pathogens of maize. Botanical preparations were utilized singly (rice husk, bamboo and wood extracts) and in combinations (RHE x BE, RHE x WE, BE x WE and RHE x BE x WE). RHE at 1.0% concentration and in combination- RHE x BE x WE at 1.5% concentration, completely inhibited mycelial growth of Fusarium solani, Fusarium equiseti, Fusarium verticilloides and Macrophomina phaseolina. Other botanical preparations, either singly or in combinations showed significant (p<0.05) reduction in mycelial growth of the fungal pathogens. Thus, these botanicals have phytofungicidal potentials towards controlling pathogenic fungi of maize, hence, could be useful in the control and management of maize diseases on large scale farming.

Maize (Zea mays L.) is one of the most important cereals in the world after wheat and rice with regards to cultivation area and total production (Akinbode, 2010). Diseases have been a major constraint to maize production, it reduce the value and quality of maize grains produced (Lamprecht et al., 2008) and may definitely increase the cost of harvesting. There are diverse diseases of maize consisting of seed rots and seedling blights (Crous et al., 2006), Northern corn leaf blight, Anthracnose, Pythium and Fusarium root rot and Southern rust (Gautam and Stein, 2011) among others. Various approaches have been used over many decades to control maize diseases such as breeding for resistance and chemical pesticides (Tagne et al., 2008).

The problems of chemical pesticides are resistance, pest resurgence, environmental pollution and risks to human health. Most of the pesticides and inorganic fertilizers are not environmentally friendly, apart from the fact that health hazards may loom as a result of the consumption of their residues in food, these agrochemicals are expensive and may not be available for farmers use when needed (Oyekanmi et al., 2008). In view of this, national and international bodies have raised a global call to promote maize production through biological approaches, being environmentally friendly and cost-effective (Abiala et al., 2011).

Biological control is on the increase but the use of natural bioprotectants like botanical extracts has not really received significant attention. Therefore, encouraging the use of botanical extracts as a promising alternative is a good step towards controlling and managing fungal pathogens of maize in Nigeria. Rice husk, bamboo and wood extracts have been used singly and reported to be effective on mycelial growth of Mycosphaerella fijiensis Morelet (Abiala et al., 2011). Similarly, rice husk extract alone was also reported by Killani et al. (2011) to be effective in the laboratory and on the field on pathogenic fungi isolated from rhizosphere soil of cowpea. To further establish the activities of rice husk, bamboo and wood extracts, we therefore focused this research work on in vitro effects of these botanical extracts (singly and in combination) on mycelial growth of fungal pathogens of maize prior to field application.

One liter potato dextrose (PD) agar (39 g/l) was prepared in media bottle and dispensed at varying volumes of 100, 99.9, 99.5, 99.0 and 98.5ml into 250-ml sterile conical flasks. The contents were sterilized in the autoclave at a temperature of 121°C for 15 min at 1.2 bars. After autoclaving, the medium was allowed to cool to the temperature of 45°C. Equal volumes of rice husk, bamboo, and wood extracts were utilized in different treatment combinations: Rice husk extract (RHE) x bamboo extract (BE), RHE x wood extract (WE), BE x WE and RHE x BE x WE. Thereafter, 0.0, 0.1, 0.5, 1.0 and 1.5 ml of each of the botanical extracts singly or in combinations were aseptically pipetted with a calibrated 250 ml pipette into sterilized PDA medium to represent concentration of 0, 0.1, 0.5, 1.0, and 1.5%, respectively. These were slowly mixed together by rolling each bottle in the palm to allow homogenous mixture of medium and the extract. Fifteen milliliters (15 ml) of this mixture was poured into 9 cm sterile disposable Petri dishes and allowed to solidify at room temperature inside the laminar flowhood. Mycelial discs of young actively growing cultures of each pathogen was cut separately with a sterile cork borer and inoculated at the center of already prepared plates containing the mixture (botanical extracts + medium) and the control plates (medium alone). The experiment was carried out in three replicates. The plates were incubated at 28±2°C and periodically observed in 3 day intervals for nine days to allow antagonist-pathogen interactions.

Laboratory data were collected on the 3rd, 6th and 9th day. The mycelial growth diameter (cm) of each pathogen was measured and the percentage of growth inhibition was calculated according to Odebode et al. (2004) as follows:

All statistical analyses were performed using SAS System for Windows Version 9.1 (2009). The data collected were analyzed using the analysis of variance (ANOVA) procedures and the least significant difference test (LSD) at p=0.05 was used to compare treatment means for each parameter. 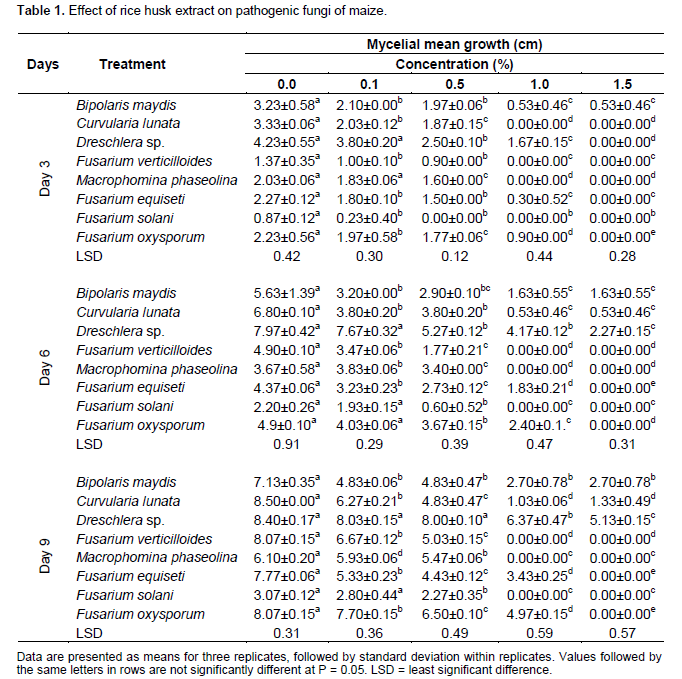 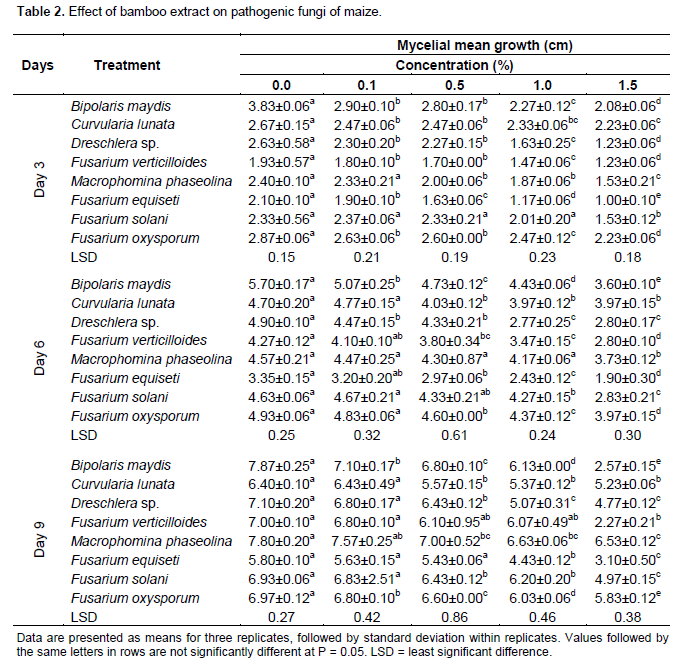 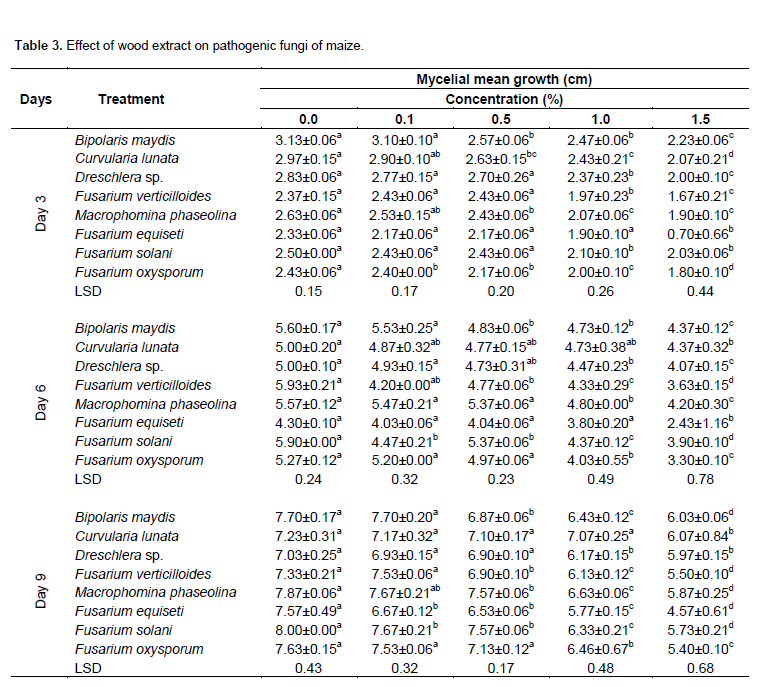 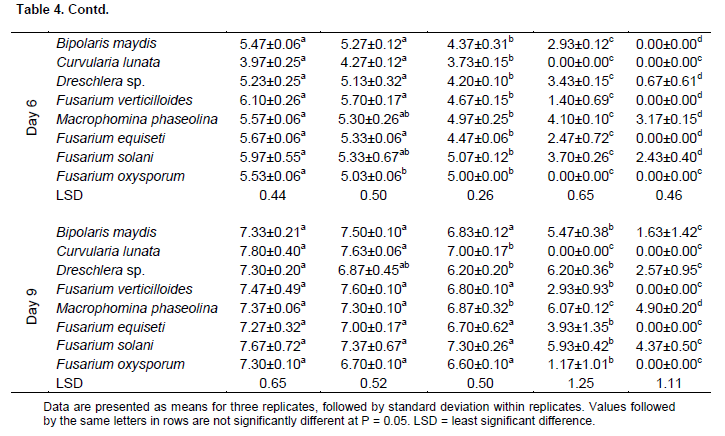 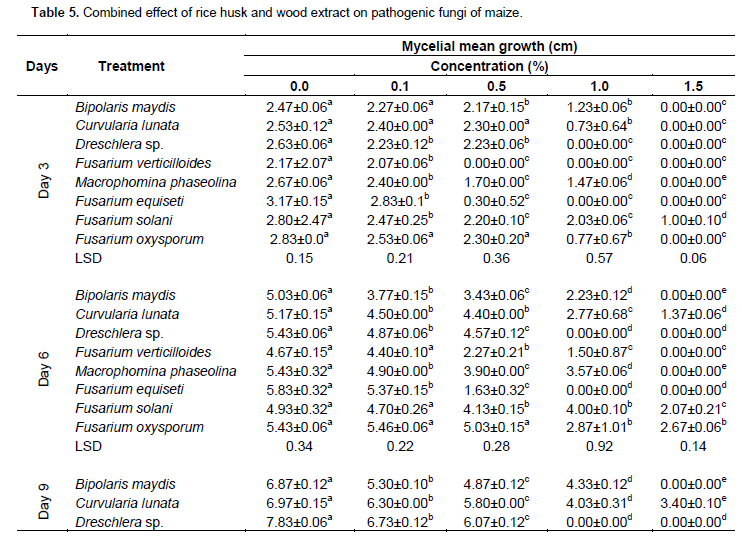 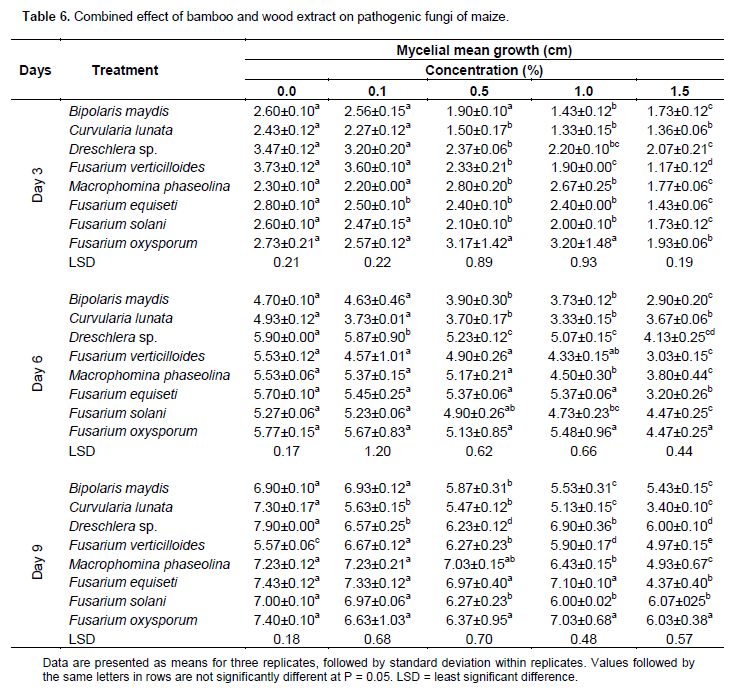 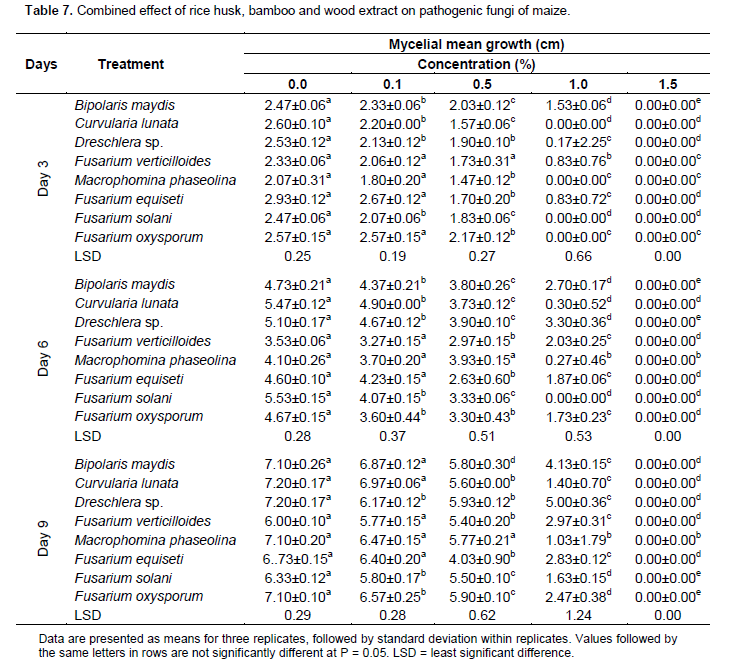 Generally, the concentration levels (0.1, 0.5, 1.0 and 1.5%) of the botanical extracts were significantly (p<0.05) effective on the fungal pathogens in order of effectiveness RHE > BE > WE. Complete mycelial inhibition was recorded for RHE at 1.5% concentrations on M. phaseolina, F. solani and F. verticillioides (Table 8) and justified that RHE alone and in combinations: RHE x BE, RHE x WE and RHE x BE x WE were observed as the best botanical extracts.

Eco-friendly approaches for plant disease management have been exploited worldwide as observed in this study. The bio-assay test at different levels of concentration (0.1, 0.5, 1.0 and 1.5%) is not far-fetched from a number of reports showing the efficacy of botanical extracts (Joshi et al., 2011; Manasathein et al., 2011). This may as well be similar to the report of Odebode et al. (2004) that plants are known to produce a variety of secondary metabolites, which are bioactive and thus may have inhibitory effects on bacteria, fungi, insects and other microorganisms. The effectiveness of the botanical extracts was observed to be dependent on the concentration used. This agreed with the work of Anamika and Simon (2011) that showed botanical extracts were effective at higher concentrations on Alternaria alternata of Aloe vera dry rot.

Bamboo and wood extracts showed the least inhibitory effects on all the fungal pathogens even at 1.5% concentration. This indicates that the effect of the botanical extracts as a phytofungicide also depends on the concentration levels used on the pathogenic fungi. Abiala et al. (2011) reported that bamboo and wood extracts completely inhibited mycelial growth of Mycosphaerella fijensis at higher (5%) concentration level as compared to mycelial growth reduction at low (1.5 and 2.5%) concentration levels. Correlating this with our study suggests that, increase in concentration levels may likely increase the effectiveness of bamboo and wood extracts on mycelial growth of fungal pathogens of maize. Also, the significant differences and variation in the effectiveness of bamboo and wood extracts may be as a result of their unknown active ingredient. This is in agreement with Maobe et al. (2013) that evaluated eight medicinal plants and proposed that the crude extracts may contain lots of phytochemical compounds that may be responsible for their effect on the clinical pathogens. With respect to this, the inhibitory activity of botanical extracts may vary with the virulence of the pathogens and most likely with the chemical components of the botanicals. This also conforms to the work of Odebode et al. (2004) carried out on two annonaceous plants Isolana cualifora verdc and Cleistochlamys krikii Berth (Oliv), the crude extract and pure compounds isolated from both plants inhibited both bacterial and fungal pathogens.

Evaluation of botanicals individually has been the norm in plant pathology with respect to biological control of plant diseases. We hypothesized in this study that the significant effect of botanical extracts in their combinations on pathogenic fungi of maize is possible and may likely perform far better than individually. The combination of RHE x BE x WE, RHE x BE and RHE x WE extracts significantly inhibited the mycelial growth of the pathogenic fungi. Although, increase in concentration levels favours BE x WE combination. This conforms to the report of Webster et al. (2008) that crude extracts are generally a mixture of active and non-active compounds (crude fusions) and therefore higher minimum inhibitory concentration are expected. Observed variation of antifungal activities of these botanical extract combinations suggests that there may be differences in the nature and chemical composition of the plants.

The in vitro antifungal properties of the extract either singly or in combinations reveal its efficacy in the control of at least one of the pathogenic fungi. The rice husk extract at low concentration levels performed excellently well, followed by bamboo extract while the least was wood extract. The complete mycelial growth inhibition observed in this study may likely correlate with what is expected in vivo. Taking advantage of these botanical extracts most especially in their combinations will be of significant importance to sustainable crop production and thus, support ecofriendly-based agricultural management systems. Therefore, proper management coupled with good formulations of these botanicals will be of significant effect for total elimination of these fungal pathogens on maize field.