The kolanut weevil, Balanogastris kolae is usually referred to as a field-to-store pest as their infestation starts in the field and continues in storage. The distribution preferences of the weevil were investigated with a view of determining their vertical and horizontal distribution in storage baskets. The kola pods used for this experiment were obtained from kola groves at the Cocoa Research Institute of Nigeria (CRIN), Ibadan. After harvesting the pods, the nuts were extracted, skinned, cured and stored in baskets lined with banana leaves for 2 weeks (according to the traditional methods) before transferring them to experimental baskets. The weevils recorded in basket A were 74% which was significantly different (p < 0.05) from the 16.5% in basket B and 9.5% in C. The horizontal distribution at the peripheral section (D) of the basket was 70.1%. This was significantly (p < 0.05) higher than the distribution at the core section (E), which was 29.9%. Therefore in the storage baskets, 74.0% of adult weevils exhibited positive geotaxis while 70.1% had affinity for lateral distribution. Farmers should therefore concentrate more at the bottom section of the basket during regular sorting and removal of weevils and infested nuts from kolanuts in storage baskets.

The genus Cola, especially Cola nitida (Vent.) Scott and Endl. (1832), and Cola acuminata Scott and Endl. (1832) are important economic crops in West and Central Africa, Carribean Islands, Mauritius, Sri Lanka and Malaysia (Eijnatten, 1969; Oladokun, 1982). Both are the only edible species of kola grown on a commercial scale.

C. nitida is considered to be indigenous to the forest area of Cote d’ Ivoire and Ghana, where it was originally distributed along Africa’s West Coast from Sierra Leone to Dahomey (Nzekwu, 1961). Cultivation of C. nitida in Nigeria must have started long before 1900 because by 1904, Bernegau (1908) reported established plantations at Agege and  villages between Abeokuta and Lagos with trees which were estimated to be up to 30 years old. The original distribution area of C. acuminata stretches from Nigeria to Gabon. It is still cultivated in South Eastern Nigeria, the South South states and in the Middle Belt states. However, in Southwestern Nigeria, its cultivation has been replaced by that of C. nitida (Eijnatten, 1969).

Kola fruits usually mature 4-5 months after pollination; at this stage the fruit is inconspicuously brown and changes in colour from deep green to a paler tint. At this time they should be harvested, because soon afterwards the follicles will begin to dehisce. When exposed, the seeds become more prone to insect attack.  It is important that harvesting should be carried out before the follicles begin to split and fall to the ground. This will guard against infestation by weevils. Harvesting should be carried out once or twice a month during the fruiting season beginning from September to the end of January. Sporadic fruiting often occurs in July and August. The peak period of production is from October to December for C. nitida (Ndubuaku, 2014).

The adults of Balanogastris kolae, (which is the most common and important of the kola weevils), are dark brown; 3 to 4 mm long and 1.5 to 2 mm wide. The female lays egg 1 cm deep in the nuts and in other parts of the fruit through wounds and holes made by other insects such as Ceratitis colae Silv. or through cracks on the husk created when the follicles dehisce before harvest.  Incubation lasts for about 4 to 6 days.  Larva stage takes 17 to 20 days and the larva feeds extensively reducing the kola to brown powdery mass.  Pupation lasts for about 5 to 6 days. The larval and pupal periods take place inside the nut.  The average period from oviposition to the emergency of the adult of B. kolae adult is 29 days.  The average life span of B. kolae adult is 53 days with oviposition starting on the third day (Daramola, 1973, 1978). Breeding continues throughout the year on left over nuts and nuts produced in-between the main harvest seasons (Alibert and Mallamaire, 1955; Daramola, 1974). The weevil is usually referred to as a field-to-store pest as their infestation starts in the field and continues in storage.

The objective of this study therefore was to study the distribution preferences of kolanut weevil (Balanogastris kolae) (Coleoptera: Curculionidae) in Cola nitida stored in baskets.

The kolanuts used for this experiment were obtained from kola groves at the Cocoa Research Institute of Nigeria (CRIN), Ibadan. After harvesting the pods, the nuts were extracted, skinned, cured and stored in baskets lined with banana leaves for 2 weeks (according to the traditional methods) before transferring them to the experimental baskets.

Vertical distribution of B. kolae

For the study of vertical distribution of kolanut weevils in storage baskets, the experimental set up consisted of 3 baskets, A, B, C, of the same size, each measuring 26 cm in length, 48 cm as the diameter of the mouth and 45 cm as the diameter of the bottom. Baskets B and C had their bottoms removed and replaced with false bottoms consisting of fish nets of 3.5 cm mesh.  The baskets were lined with banana leaves but the bottom side of B and C were not lined to allow the weevils have free movement from one basket compartment to another. Each basket was half filled with 500 kolanuts. The baskets were stacked on each other with basket A at the base, B at the middle and C on top, such that the bottom of C fitted into the mouth of B to rest on the surface of the kolanuts in B while the bottom of B fitted into the mouth of A to rest on the surface of the kolanuts in A (Figure 1). 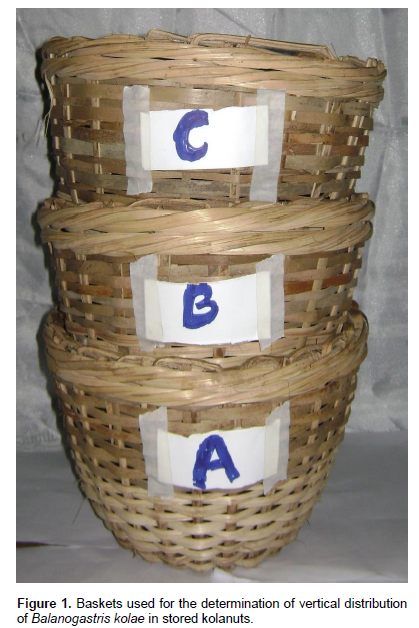 Twenty (20) weevils were distributed at the top of each basket just before stacking the baskets. The weevils were then left in the baskets for an exposure period of 24 h.  At the end of each period of exposure, the baskets were separated and the insects in each were collected and counted to determine their distribution. The treatment was replicated four times. Results obtained were subjected to analysis of variance. Treatment means which differed significantly at p = 0.05 were separated using least significant difference (LSD).

Horizontal distribution of B. kolae

The study of horizontal distribution of the weevils in storage baskets was carried out using 2 baskets D and E. Basket D is a traditional kolanuts storage weaker basket, cylindrical in shape, measuring 26 cm in height and 48 cm in diameter. Basket E is also cylindrically shaped but made of 1mm binding wire frame fitted on the side and bottom with a 35 cm mesh fish net to allow unhindered horizontal movement of the weevils. It is half the volume of basket D, measuring 26 cm in height and 23 cm in diameter.  Basket D was lined with banana leaves and Basket E was placed in the middle of basket D before filling both baskets with a total of 500 kolanuts (Figure 2). 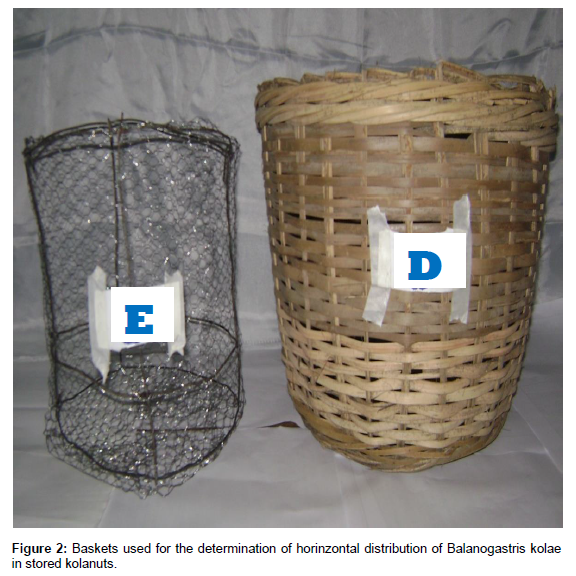 Sixty (60) weevils were evenly distributed on the kolanuts at the concentric mouths of the baskets before the baskets were covered with banana leaves for an exposure period of 24 h.  At the end of each exposure period, basket E was carefully pulled out from basket D and the adult weevils in each were collected and counted to determine their distribution. The treatment was replicated 4 times. The difference between the numbers of weevils found in the different sections of the basket was compared with the ‘t’ distribution.

The treatment means obtained for the vertical distribution of B. kolae were separated using least significant difference (LSD), while the difference between the numbers of weevils found in the different sections of the basket was compared with the ‘t’ distribution.

Table 1 shows the vertical distribution of kola weevils in the different basket compartments. The weevils recorded in basket A were 74% which was significantly different (p < 0.05) from the 16.5% in basket B and 9.5% in C. There was no significant difference between the mean number of the weevils in basket B and C.  The calculated t was 2.276, while the observed t at p < 0.05 was 3.182.

Studies on the distribution of kola weevils in storage baskets showed that kola weevils exhibit positive geotaxis by their tendency to move downward. Youdeowei (1977) observed that the nymphs of Zonocerus variegatus exhibited negative phototaxis because of their habit of craw-ling up the branches of their host plants or a rod or piece of stick held vertically. He however observed that the reactions of insects to gravity were, however, far less known than their reactions to the other environmental stimuli. The presence of more weevils at the periphery of the basket could be due to the tendency of the adult weevils to move and fly out of the habitat (kola nut storage container) probably for dispersal purposes.

The crevices at the bottom of the storage baskets should be thoroughly inspected during the regular replacement of banana leaves or removal of infested nuts to ensure that weevils hiding at the bottom of baskets are not overlooked. Further investigations will be carried out to determine how the positive geotaxis and the tendency to move towards the periphery of the basket can be exploited in baiting kola weevils and in developing an 1PM programme for the control of kolanut weevils in storage.  An effective non-insecticidal method of control of kola weevils will reduce the tendency of farmers to use hazardous chemicals for the control of kola weevils in storage.

The results obtained in this experiment can be exploited during sorting of kolanuts. It is therefore recommended that during regular sorting and removal of weevils and weeviled nuts from kola nuts in storage baskets, farmers should concentrate more at the bottom section of the basket where most of the adult weevils are located.

The authors wish to thank the staff of Entomology section, Cocoa Research Institute of Nigeria (CRIN), Ibadan for their support.