Composition of the essential oils of three Cyperus species from Congo

Cyperus articulatus (L.), Cyperaceae is a rhizome-bearing herb found in Africa, Latin America, Asia and Oceania (Schultes and Raffauf, 1990). In Congo, Gabon and Benin, these rhizomes are used in traditional practice to treat many diseases such as malaria, stomach-ache, respiratory infections, toothache, migraine and epilepsy (Bouquet, 1969). In northern Congo, the powder of rhizome of C. articulatus is commonly used in traditional medicine as skin application, fumigant or perfume.

The underground parts of C. articulatus (L.) were collected in the raining season (October 2005) at the full flowering stage, from Owando, Department of Cuvette-Congo. The underground parts of Cyperus sp. (V.) and K.brevifolia (S.) were collected in the raining season (November 2005) at the full flowering stage from Brazzaville in Republic of Congo. Voucher specimens were deposited in the herbarium of CERVE (Centre d’Etudes et de Recherches sur les Ressources Végétales) where they were identified by comparison with three voucher specimens Nere No. 1011 of 1963 February 2rd, P. Sita no. 400 of 1961 September and B. Descoings no. 6045 of 1960 July 1st for C. brevifolia and lastly K. erecta. With too voucher specimens B. Descoings no. 9013 of 1961 August 10th and J. Koechlin no. 1396 of 1951 October 9th for C. articulatus. Nowadays there are new voucher specimens, J.M. Moutsambote no. and no. 7210 of 2013 August 2rd respectively for Cyperus sp. and C. articulatus. The rhizomes and underground parts of plants were washed, dried at room temperature in the laboratory for two weeks and then grounded before use.

Air-dried underground parts of the plants (62.5 g, three times for each species) were subjected to hydrodistillation for 6 h using a Clevenger-type apparatus. The oil layers was separated from  water layers and were collected and anhydrous sodium sulphate was added to remove any residual water. Yields of the essential oils were determined and the oils were stored at low temperature until use for analysis.

GC-MS analyses were carried out on a Varian 3400 GC-MS system equipped with a DB-5 fused silica column (30 m x 0.25 mm i.d.). Oven temperature was 40-240°C at a rate of 4°C/min, transfer line temperature 260°C, carrier gas helium with a linear velocity of 31.5 cm/s, split ratio 1/60, ionization energy 70 eV; scan time 1 s and mass range of 40-300 amu. The percentages of compounds were calculated by the area normalization method, without considering response factors. The components of the oil were identified by comparison of their mass spectra with those of a computer library or with authentic compounds and confirmed by comparison of their retention indices, either with those of authentic compounds or with data published in the literature (Adams, 1995).

Comparing the compositions of the oils of these Cyperaceae, it has been shown that only β-pinene and limonene were present in the three oils. The amount of β-pinene varied from 0.72 to 13.58% and of limonene from 0.40 to 2.41%. The difference of the essential oils is very pronounced between Cyperus sp. and K. brevifolia from where only α-pinene and limonene are common components. There are only five compounds, α-pinene, limonene, α-terpineol, caryophyllene oxide and humulene epoxide II, that are common to both the oils of C. articulatus and Cyperus sp. While α-pinene, β-pinene, limonene, 1,8-cineole, cyperene and eudesma-2,4,11-triene are the six compounds found in both the oils of C. articulatus and K. brevifolia. These results showed a broad difference in the composition of these essential oils (Figures 1, 2, 3).

The essential oil of K. brevifolia contains 44.08% of manoyl oxide followed by 13.58% of β-pinene. Manoyl oxide, the major component in oil of K. brevifolia, was absent in the other oil and the concentration of β-pinene was very low, 2.94 and 0.72% respectively in oils of C. articulatus and C. sp. Farnesol was present in the amount of 28.61% in Cyperus sp. followed by humulene epoxide II (12.86%) and caryophyllene oxide (8.96%) which are respectively in low amount in C. articulatus, 0.59 and 3.24%, but absent in K. brevifolia. α-Cadinol and trans-pinocarveol, the two principal components of C. articulatus were absent in the two others species of cyperaceae. Myrtenol, myrtenal and verbenone were absent in Cyperus sp and K. brevifolia. Cyperenone, the third major component of C. articulatus was found in little amount (0.88%) in K. brevifolia. Amounts of cyperene in C. articulatus (6.29%) and K. brevifolia (7.63%) were comparable. The results of our findings are similar to the findings of Duarte et al. (2005) and Olawore et al. (2006) where cyperotundone, cyperenone and cyperene were not simultaneously found in oil of C. articulatus. The lack of one of these constituents in Cyperaceae species can be explained by the total percentages recovered which are less than 100%. This analysis explained probably the lack of cyperotundone, cyperenone and cyperene compounds in essential oil of C. articulatus previously reported by Duarte et al. (2005) where only 17 components were identified accounting for 82.00%.

There are some minor components in the oil of C. articulatus, such as nopinone, patchoulenone, β-maaliene, p-cymen-8-ol, β-calacorene and others that were not present in the other two oils. However, the oils of Cyperus sp. and K. brevifolia also have minor components, such as borneol, β-bisabolol, γ-terpineol, palmitic acid and others that are not present in the C. articulatus oil.

Comparing the present results with those previously reported in the literature, on essential oil compositions of rhizomes of C. articulatus and K. brevifolia from different countries, it is apparent that, there are many differences regarding the major and the main components of oil, which further suggest the existence of more chemical diversity within these Cyperaceae species. The reason for variation between the chemical compositions of oils may be depended on climatic, seasonal, geographic conditions, harvest period and isolation procedure. 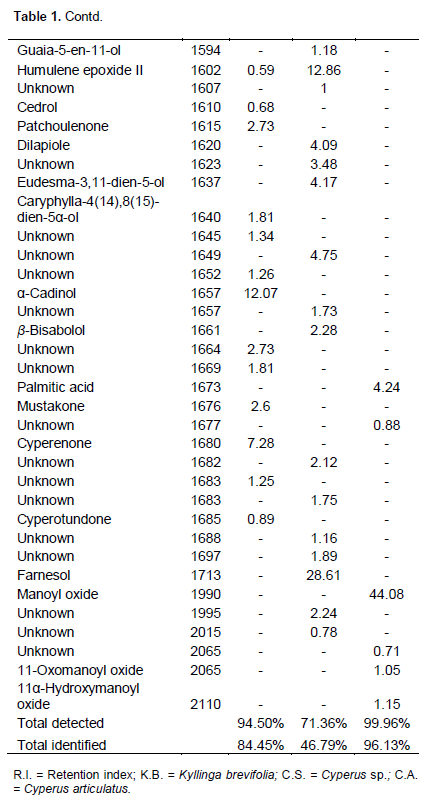 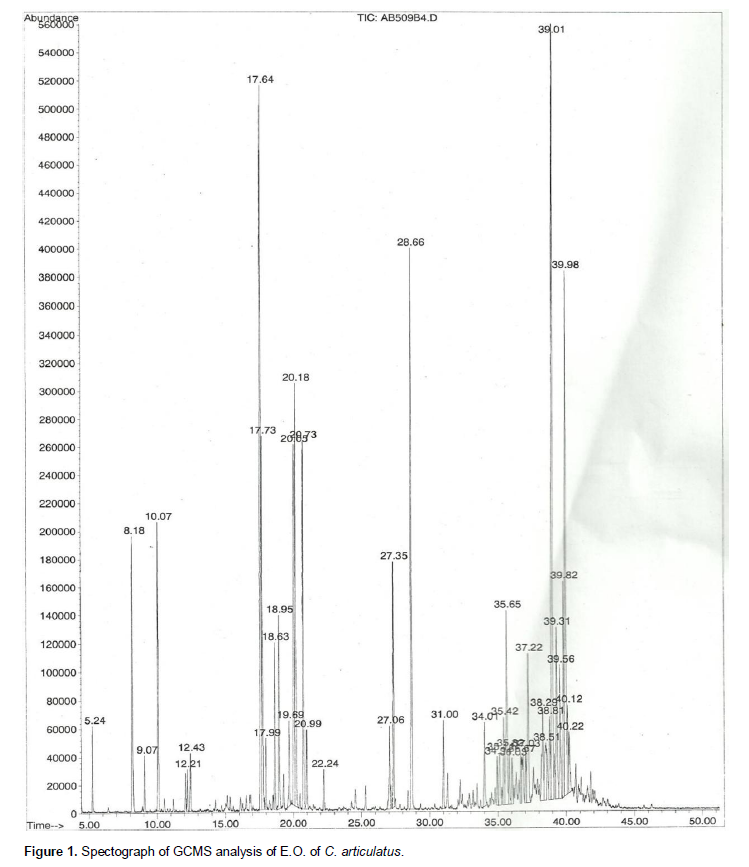 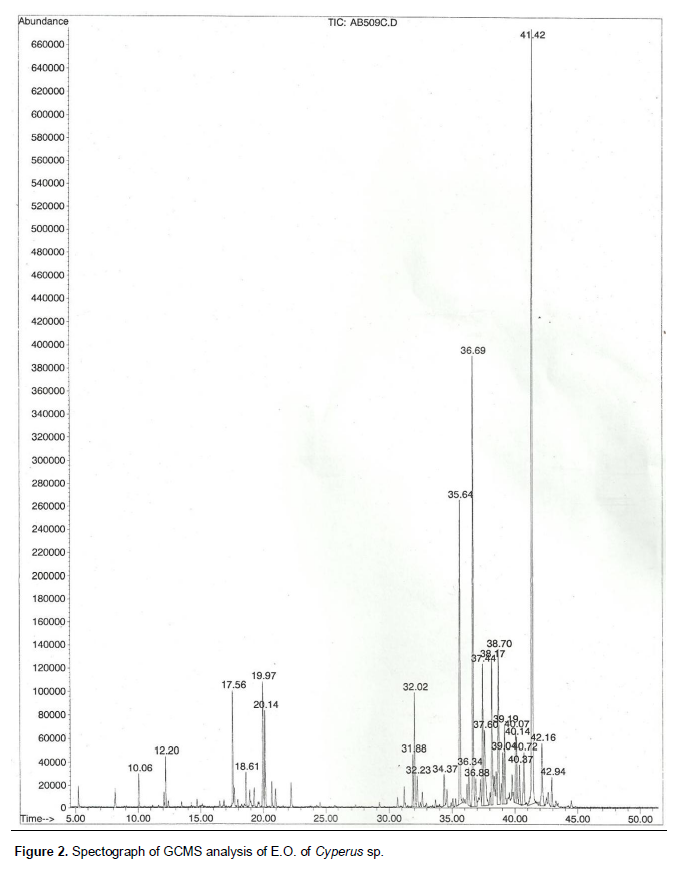 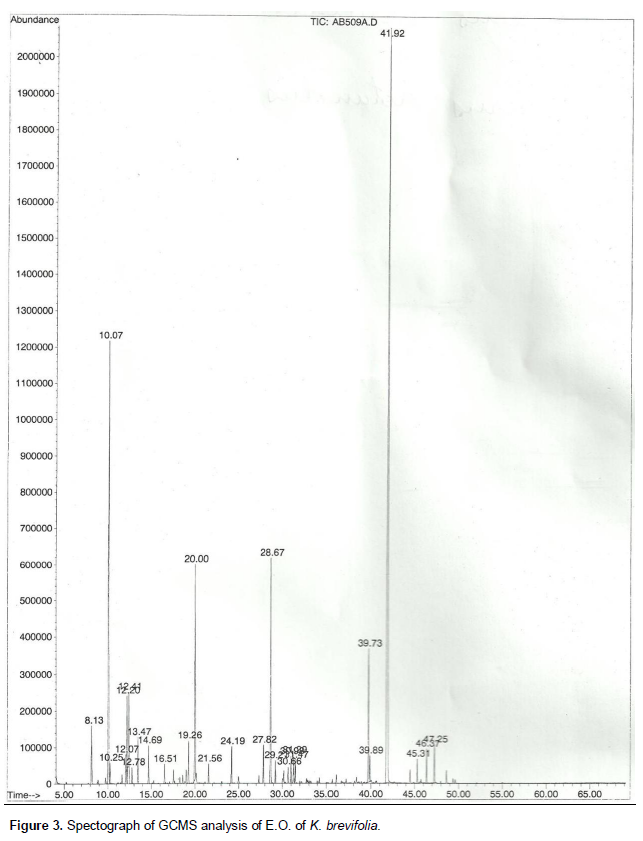