The pollen morphological characters of 6 species belonging to 4 genera of the subfamily Stachyoideae (Lamiaceae) growing naturally in Saudi Arabia were investigated with the aid of light microscope (LM) and scanning electron microscope (SEM), to find new features that might increase knowledge of pollen morphology of the species, and also to help the taxonomic characterization of the Stachyoideae genera. The morphological characters studied were size, shape, tectum surface ornamentation, number and type of the colpi. The study indicated that the average size of the pollen was different among the species since the smallest size was that of Nepeta deflersiana (P = 25.2 ± 2 and E = 15 ± 3) while the largest size was that of Salvia aegyptiaca (P =36.5 ± 2 and E = 30.3 ± 2). Pollen shape is spheroidal to sub-spheroidal or prolate. The fine structure of the exine of pollen was slightly different among investigated species. The number and type of colpi of the pollen in species studied were 6-zonocolpate type except those of N. deflersiana and Otostegia fruticosa ssp. schimperi having 3-zonocolpate.

The family Lamiaceae is divided into several subfamilies including the subfamily Stachyoideae which is represented by15 species in Saudi Arabia (Al Watban, 2004). Contribution to the pollen morphology of some members of the Lamiaceae has been studied by Erdtman (1945), Emboden (1965), Belkin (1972), Mukherjee (1972) and Abu-Asab and Cantino (1992, 1994), trying to use the pollen morphology in classification of Lamiaceae members. However, morphological study on pollen grains of the tribe Ocimeae was done by Harley et al. (1992) who revealed some differences in their sizes, shapes and exine sculpture, and reported four types of pollen grains. Recently, Perveen et al. (2003) mentioned that the pollen morphology of the Family Lamiaceae from Pakistan does not confirm sub-family level of classification while it may be used in identification of species. Moon et al. (2008) in their study on Tribe Mentheae suggested that the variation in exine ornamentation of the pollen may have systematic value especially at generic level. Also, a study on two Salvia species by Hamzaoglu et al. (2005) revealed that the pollen shape and its exine ornament-tation exhibit obvious variations and could be used at species level. Moreover, Jafari and Nikian (2008) reported that pollen characters of four desert species of Salvia may be used for their identification. In another study carried out by Celenk et al. (2008a, b), the pollen characters of the genera Mentha L. and Napata L. were valuable and may be useful for classification at subgeneric level. Kahraman et al. (2009 a, b, 2010 a, b) and Kahraman and Doghan (2010) reported that the pollen size, shape and exine ornamentation in the genus Salvia are important in distinguishing between the species. Dereboylu et al. (2010) in their work on Salvia willeana and Salvia veneris reported that pollens of the two species were similar in their morphological characters where they are with 6 zonocolpate, sub-prolate shape, and semi- tectate structure and exhibited bireticulate sculpturing, which cannot be used to distinguish between the two species. Özler et al. (2013) in their study on Hymenosphace and Aethiopis sections of the genus Salvia found that pollen features of closely related species indicate some differences which can be used for their identification. The previous investigations indicate that there is no final agreement for which level of classification can be useful in using pollen morphological characters in Lamiaceae. The aim of this work was to study pollen morphology of 6 species under 4 genera of the subfamily Stachyoideae, to show some pollen features of these arid species that may increase knowledge of pollen morphology of species and also to help the taxonomic characterization of these 4 genera, since there is no available information on the pollen morphological features of Lamiaceae species which are growing naturally in Saudi Arabia.

The studied pollen materials were obtained from preserved samples in the Ministry of Agriculture and Water, Riyadh, Saudi Arabia. Processing of pollen grains for light microscope (LM) was done using the usual acetolysis method (Punt, 1962). For scanning electron microscope (SEM) studies, pollen grains samples were run through an alcohol series 50, 70, 80, 95 and 100% on the stubs using micro-pipettes, (without losing any pollen). The stubs were coated with gold. The representative pollen grains were photographed at various magnifications in a JSM-5800 LV (JOEL) scanning electron microscope. The measurements were based on 15 readings from each specimen. Descriptive terms were according to Moore and Webb (1978) and Punt et al. (2007). Size measurements for the pollen grains were taken according to Erdtman (1971) [very small < 10 µm in dimensions; small 10-25 µm; medium (25-50) µm; large (50-100) µm; very large (100-200) µm; huge > 200 µm].

Most of the pollen grains have yellow to brown colour, small to medium size with sub-spheroidal shape in outline; exine surface is reticulate, perforated to granulate, with 6 colpi, zonocolpate with acute apices. The polar length is 26.8 ± 1 µm and equatorial length, 21.87 ± 2 µm (Figure 1: 1 and Table 1). 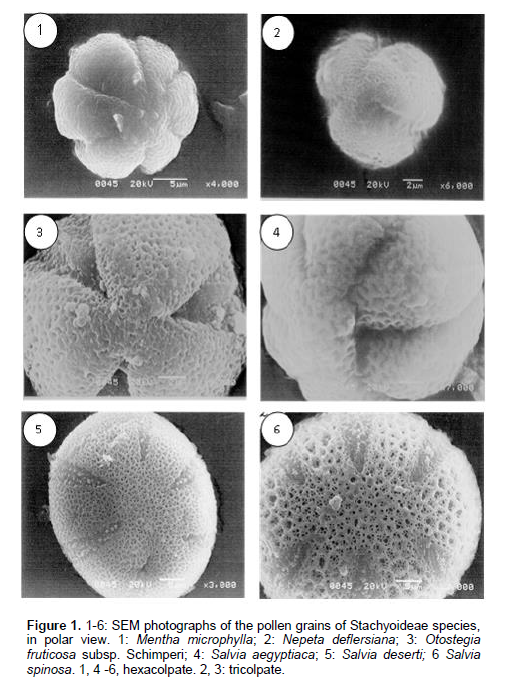 Pollen grains are yellow colour, small to medium size with prolate shaped in outline. Pollen with 6 zonocolpate, surface structure of the exine is bireticulate-perforate. The polar length, 36.5 ± 2 µm, and equatorial length, 22 ± 2 µm (Figure 1: 5 and Table 1).

The pollen grains are yellow to brown in colour, medium size and circular to ovate shaped in outline (under LM). Pollen with 6 zonocolpate, the exine is bireticulate-perforate. The polar length, 34.3 ± 2 µm, and equatorial length 27.5 ± 3 µm (Figure 1: 6 and Table 1).

The pollen morphological characters of 6 species are illustrated in Figure 1: 1 to 6 and summarized in Table 1.

The following observations were obtained: The average size of the pollen grains range from small (P/E= 25.2/15) in N. deflersiana Schweinf., to medium size (P/E= 36.3/30.3) in S. aegyptiaca L. (Table 1) which is quite different among the individual species, the genera, but not among the species of Salvia, and may confirm their position in different genera, this result agree with those reported by Harley et al. (1992), Jafari and Nikian (2008), Kahraman et al. (2009) and Özler et al. (2013). The shapes of pollen were described by using their polar and equatorial axis ratio which exhibit spheroidal, sub-spheroidal and prolate (Table 1). This result indicated that pollen shape can be used for the identification at genera and species levels which agree with that suggested by Perveen et al. (2003). The fine structure of the exine surface of pollen is quite uniform for almost all species under study as it is reticulated in general but it is reticulate perforate in the pollen grains of M. microphylla Koch. (Figure 1: 1) and in N. deflersiana Schweinf. (Figure 1: 2) which agree with the results of the studies on the two genera Mentha L. and Nepeta L. (Celenk et al., 2008a, b). Also, it is reticulate-perforate in the pollen grains of O. fruticosa subsp. schimperi (Boiss.) Tackh. (Figure 1: 3) which is described in details for the first time in this work, and in general agreement with the exine ornamentations of the pollen of O. aucheri described by Perveen and Qaiser (2003). However, the exine sculpturing of the pollen is uniform as being bireticulate and perforate, in S. deserti (Figure 1: 4), S. spinosa (Figure 1: 5) and S. aegyptiaca (Figure 1: 6); This result agree with several investigations on pollen morphology of Salvia species (Hamzaoglu et al., 2005; Jafari and Nikian, 2008; Kahraman et al., 2009a, b, 2010a, b; Kahraman and Doghan, 2010; Dereboylu et al., 2010; Özler et al., 2013). The colpi of the pollen in the species investigated (Figure 1: 1- 6) are two types: 1) Hexa-zonocolpate type in the pollen of M. microphylla Koch. (Figure 1: 1) and this is in accordance with those described in the genus Mentha L. (Celenk et al., 2008 a) and in the three Salvia species (Figure 1: 4, 5 and 6) which agree with those reported in the pollen grains of different Salvia species (Hamzaoglu et al., 2005; Jafari and Nikian, 2008; Kahraman et al., 2009a, 2010a, b; Dereboylu et al., 2010; Özler et al., 2013). 2) Tri-zonocolpate in the pollen of N. deflersiana (Figure 1: 2) which is confirmed by Celenk et al. (2008 b) and O. fruticosa subsp. schimperi (Figure 1: 3) which agree with that reported by Perveen and Qaiser (2003). However, our results on limited desert species of subfamily Stachyoideae showed useful morphological characters of pollen grains, e.g. shape, size colpi and fine structure of exine, which can be used in the identification of species and agree in general with previous investigations in Lamiaceae members in spite of the difference in their environment conditions.