The efficacy of Moringa Oleifera, for the phytoextraction of heavy metals (Zn, Fe and Pb) in tropical soil was investigated. A randomized complete block design (RCBD) consisting of 3 blocks was used. Each block (A, B and C) was polluted with 100 mg Zn, Pb and Fe, respectively. Each block was subdivided into treatment and control of 5 replicates each. Two seedlings of M. Oleifera were planted in each treatment plot (phytoextraction) while no planting was done in the control. Zn, Fe and Pb, were analyzed for the soil and plant parts. Results show that M. oleifera was able to extract and accumulate high concentration of these metals (Zn, Fe and Pb) in their roots and shoots. The percentage reductions of the heavy metals in the soil were Zn (20.1%), Fe (22.7%) and Pb (64%) after 3 months of phytoextraction. The transfer factor was in the order of Zn > Fe > Pb while translocation factors indicate that metals were largely retained in roots. On the basis of the result obtained, M. oleifera, can be classified as hyperaccumulator of some measured heavy metals and therefore, it is suitable for phytoextraction of heavy metal (Zn, Fe and Pb) contaminated soils.

Heavy metal can occur in any ecosystem-terrestrial or aquatic and when it occurs it affects all components of the ecosystem (biotic and abiotic). The effects range from physical and chemical contaminations of soil, air and water to deleterious impacts on flora and fauna.

Some metals such as Fe, Mn, Zn, Cu, Mg, Mo, and Ni are essential for plant growth in low concentration. However, high concentrations of these heavy metals in soil can negatively affect crop growth, as these metals interfere with metabolic functions in plants such as inhibition of photosynthesis, and respiration and degeneration of main cell organelles, even leading to death of plants (Garbisu and Alkorta, 2003; Schmidt, 2003; Schwartz et al., 2003). Soil contamination with heavy metals may also cause changes in the composition of soil microbial community, adversely affecting soil characteristics (Giller, 1998; Kozdrój and Van-Elsas, 2001).

Due to the negative effects of these heavy metals on the ecosystem especially at high concentration, it is imperative to apply some remedial measures. Several methods are already being used to clean up the environment from these kinds of contaminants, but most of them are costly and far away from their optimum performance. Conventionally, remediation of heavy-metal-contaminated soils involves either onsite management or excavation and subsequent disposal to a landfill site. This method of disposal solely shifts the contamination problem elsewhere along with the hazards associated with transportation of contaminated soil and migration of contaminants from landfill into an adjacent environment. Soil washing for removing contaminated soil is an alternative way to excavation and disposal to landfill. This method is very costly and produces a residue rich in heavy metals, which will require further treatment. Moreover, these physico-chemical techno-logies used for soil remediation render the land usage as a medium for plant growth, as they remove all biological activities (Gaur and Adholeya, 2004).

Recent concerns regarding the environmental contamination have initiated the development of appropriate technologies to assess the presence and mobility of metals in soil (Shtangeeva and Laiho, 2004). Presently, phytoextraction which is a form of phytoremediation has become an effective and affordable technological solution used to remove metal pollutants from contaminated soil. This technology is environmental friendly and potentially cost effective. Many species of plants have been successful in absorbing contaminants such as lead, cadmium, chromium, arsenic and various radionuclides from soils. One of phytoremediation categories, phytoextraction, can be used to remove heavy metals from soil using its ability to uptake metals (Fe, Mn, Zn, Cu, Mg, Mo and Ni) which are essential for plant growth.

This study attempts to determine the uptake and accumulation of heavy metals in different parts of the studied plant. It is expected that the findings obtained from this study will provide us with a clue on the efficacy of M.oleifera in the phytoextraction of heavy metal in the tropical soil.

This study was carried out at the Ecological Centre, University of Port Harcourt. It is located in the Niger Delta area of Nigeria on geographical coordinates: latitude 4° 65’ N and longitude 7° 5’ E. The climate condition of the area is characterized by high temperature, high rainfall and high relative humidity.

The soil was thoroughly mixed in the bag to enhance the harmonization of the metal solution with the soil. The bags were allowed to stand for two weeks. After the two weeks of post-pollution treatment, each block (treatment) was subdivided into two subsets of five replicates each.

Two seedlings of M. oleifera were transplanted from the nursery into each bag of one subset for each block while the other subset acted as the control for each block with no planting. This was done for all the blocks (A, B and C). It was also ensured that the plants were of the same sizes. Watering was done three times a week. The quantity of water used for watering the planting bags was 50 cl per bag. Weeding was done when the need arose. The experiment lasted for 12 weeks.

Soil samples were collected from each bag after pollution (but before the plants were transplanted into them). This was done to ascertain the level of these metals present in the soil before phytoextraction. Soil sample collections were also done at the termination of the experiment. The heavy metals (Zn, Fe and Pb) were analyzed for the soil samples.

At the end of the 12 week period, the plants were carefully harvested from each bag. The shoots were separated from the root by cutting. All samples collected from each treatment were taken to the laboratory immediately for analysis. The plants parts and soil were analyzed for their heavy metal (Pb, Fe and Zn) content. This was done in accordance with their treatment. The plant concentration factor and translocation factor were also calculated.

Soil samples collected were analyzed by air-drying and all clods and clumps removed. Dried soil was sieved using 2 mm sieve to remove coarse particles before analysis. One gram (1g) of the dried soil sample was placed in 100 ml beaker and; 3 ml of perchloric acid and 5 ml of nitric acid were added. The mixture was allowed to stand for 15 min before digestion by gently heating at low temperature on a hot plate and allowed to cool for 5 min. The digest was then filtered into 50 ml standard flask. The filtrate was analyzed for heavy metal using atomic absorption spectrophotometer (AAS).

Where, Cplant and Csoil represents the heavy metal concentration in extracts of plants and soils respectively (Cui et al., 2005). 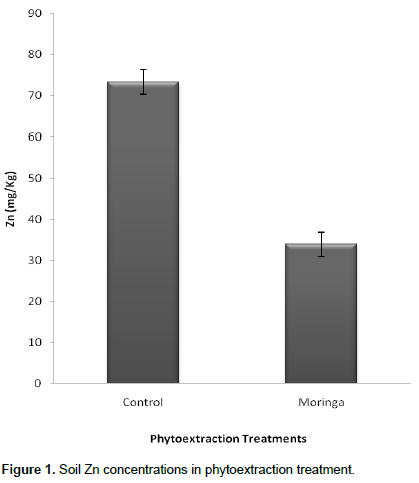 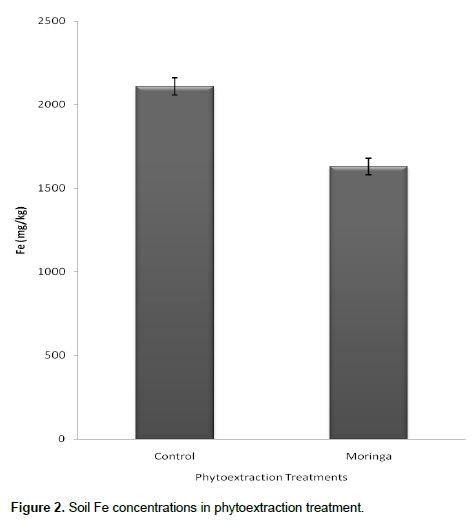 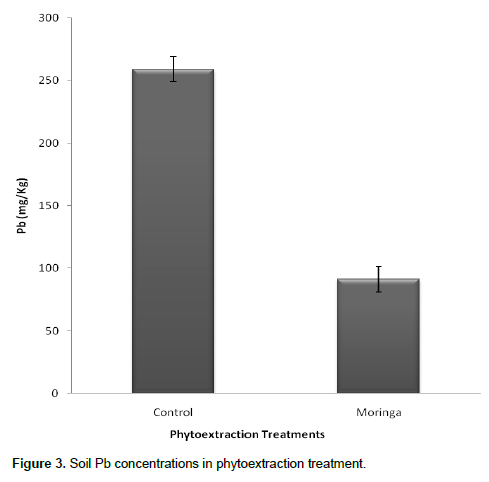 It was also observed that the reduction of the heavy metals in the soil differed considerably from metal to metal. Results show that the  percentage reduction of Pb, Zn and Fe were 64, 20.1 and 22.7%, respectively. 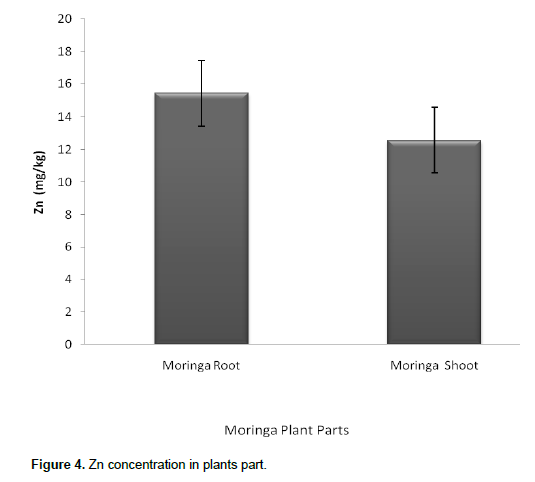 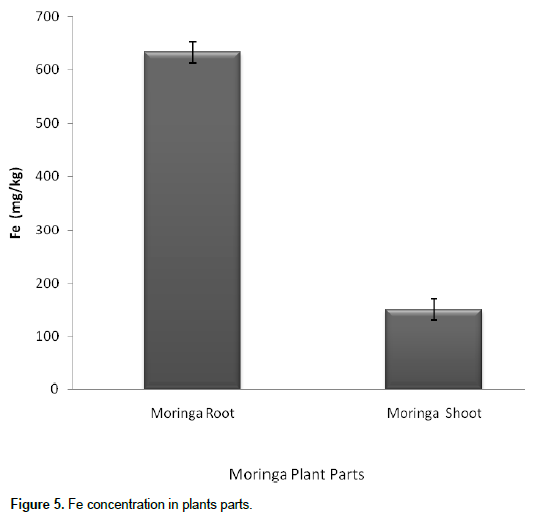 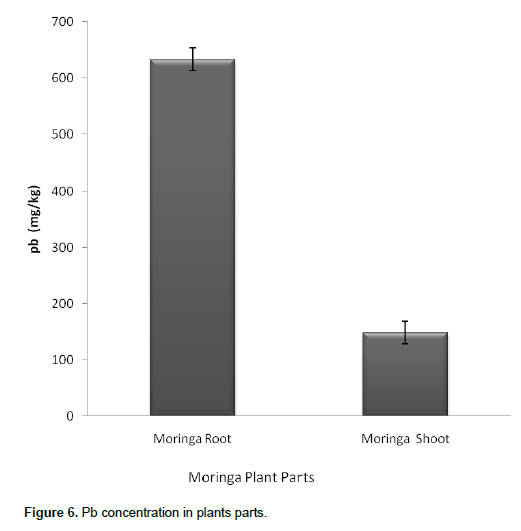 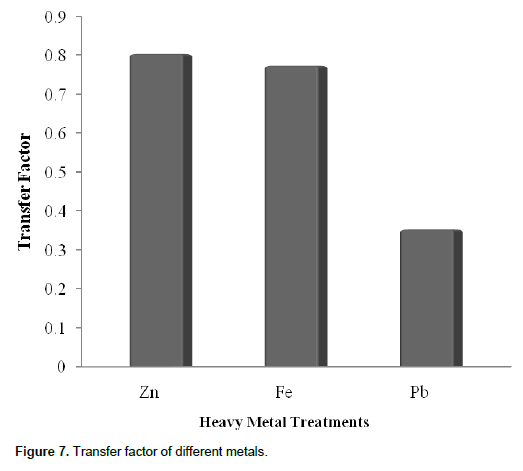 The translocation factor which is an indication of the ratio of heavy metal retention in the shoot over the root showed that the values for the 3 heavy metals studied were below one (1). This also buttress the fact that the phytoextracted plant (M. oleifera) accumulated and retained heavy metals (especially Fe, Zn and Pb) more in the root system that the shoot system (Figure 8). The order of translocation factor was: Zn > Pb > Fe. 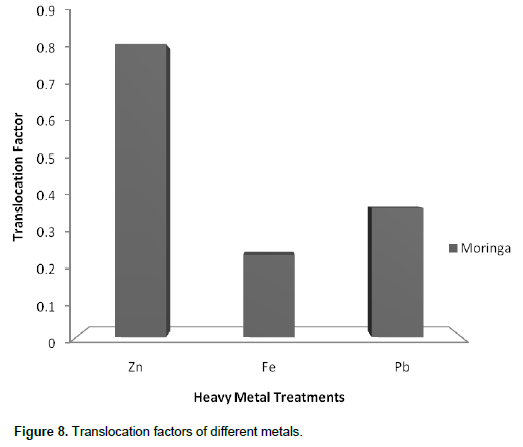 It is a well established fact that some plants can extract heavy metals from the soil or water and accumulate or retain them in their body parts (roots, stems or leaves). This uptake and accumulation of metal ions by plants differ from plant to plant and in varying degrees. The bioavailability of the metals can also influence their uptake by plants which are in turn determined by both external (soil-associated) and internal (plant-associated) factors.

Results showed that M. oleifera plant has the ability to phytoextract heavy metals especially Fe, Zn and Pb and accumulate them in their body parts (below-ground and above-ground). Although, the strategy employed by M. oleifera plant for the uptake of heavy metal varies among heavy metal treatments as shown in the result in which the percentage reduction was in the order of Pb (64%) > Fe (22.7%) > Zn (20.1%). This is understandable since some plant exhibit selective absorption of metal ions from soil in which a particular plant may prefer a particular metal ion to another. Fleming and Parle (1977) reported that the uptake of heavy metal varies widely depending on the plant species being studied. It was long recognized that the uptake of metals by plants were plant species dependent (Adriano, 1986). Some plants release specific metal-chelating or reducing compounds into the rhizosphere to aid the absorption when availability of these micronutrients is low (Marschner, 1995).

The analysis of transfer factor indicates that the uptake capabilities of heavy metals from soil to M. oleifera is in the order of Zn > Fe > Pb. This could be attributed to the plant species used. Zurera et al. (1987) have reported that the mobility of metals from soil to plants is a function of the physical and chemical properties of the soil and of plants species, and is altered by innumerable environmental and human factors.

Translocation factor, the ratio of shoot to root metals, indicates internal metal transportation. The data presented indicate that metals accumulated by the test plant species (M. oleifera) were largely retained in roots, as shown by TF values (<1). Translocation factor (TF>1) showed that translocation of metals effectively was made to the shoot from root (Baker and Brooks, 1989; Fayiga and Ma, 2006).

It can be concluded that the ability of a plant species to phytoextract and accumulate  heavy metals varies among the heavy metals. There were drastic reductions in the heavy metal contents of soil phytoremediated with M. oleifera. Moreover, the level of accumulation of these metals studied (Zn, Fe and Pb) was more pronounced in roots than shoots. Therefore, M. oleifera is capable of phytoextracting these metals (Zn, Fe and Pb), but their accumulation rate is dependent on a particular metal.