The study was carried out to evaluate the effect of botanical, chemical and cultural methods on the management of termite in seedling beds of hot pepper in Tanqua Abergelle district of Sheka Tekli during 2015-2016. The experiment comprised of treatments including Neem Leaf extract, wood ash, Dursban and control and each treatment was applied at 40 kg ha-1, 10000 kg ha-1, and 0.5 L ha-1 respectively. The experiment was designed through Randomized Complete Block Design and each treatment was replicated thrice. The treatments were applied directly on seedling beds while seeds were sown. Data was collected after six weeks of sowing pepper seeds. The numbers of healthy seedlings were significantly affected by the application of treatments. Hence, the highest number of seedlings at six weeks after sowing (1658250 seedlings ha-1) and transplanting (1505490 seedlings ha-1) were recorded on plots treated with dursban and neem leaf extracts respectively. Likewise, lower NUMBER of seedlings damage was recorded on beds treated with dursban (504510 seedlings ha-1) and Neem leaf powder (623100 seedlings ha-1) compared with untreated experimental plots. The highest net return (74020 Birr) with a marginal rate of return (42.64 Birr) was obtained with application of neem leaf extract. Thus, the application of neem leaf extract alone or interchangeably with dursban should be promoted to farmers of Tanqua Abergelle district and other location with the same environmental conditions to easily manage termite on the seedling of hot pepper.

Termites are social insects that belong to the Isoptera order. They are occasionally associated with severe damage to rangeland vegetation, particularly, in degraded arid and semi-arid ecosystems. Termites are destructive structural pests as well as agricultural pests found primarily in the tropical regions of the world, where they play an important ecological role in the recycling of Wood and other cellulose-based materials (Abdurahaman, 1990). There are currently approximately 2,800 named termite species in 282 genera worldwide. Of the most economically important termite spp. Macrotermes subhyalinus (Rambur) and Microtermes adschaggae (Sjosted) are widely observed in the region (Abdurahman, 1990). Currently, many regions of the world are subjected to expansions and/or invasions of subterranean termites. In some areas, including Ethiopia, termite constitutes a significant pest problem in agriculture. In general, plants exotic to the specific area and water-stressed plants are most prone to attack by termites. They are serious pests of a wide range of crops, forest trees and buildings in Western Ethiopia (Hailemichael Taye et al., 2013; Legesse et al., 2013). It is also the most economically important insect pest of many crops in Tanqua Abergelle district. Termite infestation and damage starts while plants are standing in the field. A soil infested with termite mostly resulted in distortion of soil structures and compactions. Hence soil becomes difficult to plough, this in turn results in a reduction of productivity of crops. Termites are devastating insect pests which caused 36 to 62% reduction in yields of hot pepper and maize, respectively. Termites also cause severe devastations on the forest, and thus soil remains bare and exposed to elements of soil erosion (Abraham, 1990; Kumar and Pardeshi, 2011; Bong et al., 2012). As a result, farmers are forced to leave their farmlands (Abraham and Adane, 1995). Yield loss depends on the type of crop, the extent of stand reduction and the attack at the different growth stage of the crops by termites.
Abdurahaman (1990), stated that 45% crop removal at the six-leaf resulted in 16.5% of yield loss, whereas the same reduction at the tasseling stage caused 39.9% yield loss. Addisu et al. (2014) also stated that severe infestation of termite spp. could cause up to 100% crop losses in Ethiopia. Unlike the effect on the environment and cost, the use of some chemical insecticides are highly effective against termite (Kumar et al., 2012). Chemical spray with Dursban is highly effective in the management of wood destroying termites (Roll, 2007). The possibilities of using different control measures such as fungal insecticides, bio-insecticides and botanical method rather than chemical insecticides have been reported (Silva et al., 2012; Sujatha et al., 2012). The application of crop residue and cattle manure reported reducing the number of termites on crop fields' by 21.6 and 29.7% compared to non-treated fields (Legesse et al., 2013). There are also many plant-based botanicals that could act against termites in crop fields and vegetations. The latex and quinines of some botanicals like Calotropis procera, Ipomoea fistulosa, Maesa lanceolata, Croton macrostachyus, Tegetes minuta, Datura stramonium and Azadirachta indica are reportedly used for the management of termites throughout the world (Derbalah et al., 2012; Singha et al., 2013; Upadhyay, 2013). The use of indigenous plant extracts as an alternative for insect pest control also reported (Abdullahi et al., 2011; Sathyaseelan et al., 2008). The use of leaf powders of Azadirachta indica and Maesa lanceolata were found to be effective in controlling termite on hot pepper at Bako (Sisay, et al., 2008). According to Venmalar and Nagaveni (2005), Neem extract contains toxic constituents exhibiting high toxicities against different microbes and insect pests. Some research works had been conducted to investigate the effectiveness of biopesticides against termite. However, the assortments of best commercial products are limited and insufficient to fulfil the requirements of small-scale farmers throughout Tigray region. Hence, the study was initiated to evaluate the performance of the application of chemical, botanical, and cultural control methods with respect to plots maintained with no termite control activities to screen the best termite control strategies.

Description of study area
The experiment was carried out during 2015/2016 production season for two years. It was undertaken at Sheka Tekli kebele of Tanqua Abergelle district where termite is the main production constraints of pepper seedlings. The study area is located at 13°14'06" N Latitude and 38°58’50”E longitudes and its average altitude are below 1500 m above sea level (Figure 1). The area is characterized as hot warm sub-moist low land (SML-4b) and the average annual rainfall ranges from 350 -700 mm with minimum and the maximum temperature is 24 and 41°C respectively. 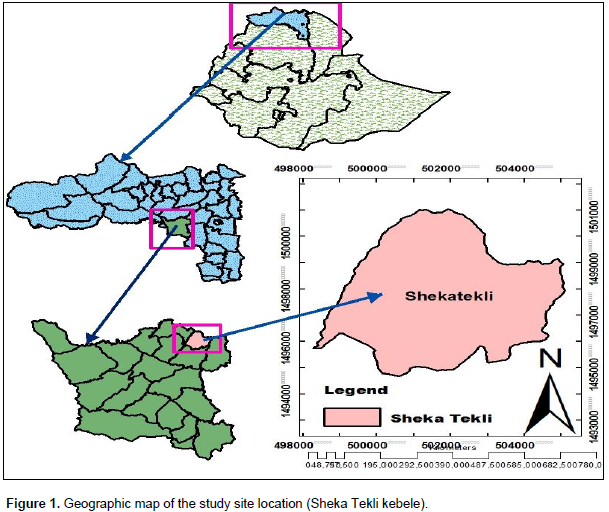 Experimental materials and design
The experiment comprised four types of management methods including chemical, botanical treatment, the cultural method using Wood ash and termite infested checks. The treatments were arranged using a Randomized Complete Block Design (RCBD) and each treatment was replicated thrice. Twelve experimental plots including check were used. Finally, all experimental units were treated uniformly at the same time. Dursban, Neem leaf extract, and wood ash were treated at a rate of 0.5 L, 24 and 6 kg per hectare basis respectively. The spacing between plants, rows, pathway and block were 2, 15, 50 and 100 cm respectively.
Preparation and application of Neem extracts and Wood ash
Fresh leaves of Neem were collected, sun-dried for three days and ground into powder using mortar and pistol. Likewise, 12 g of Neem leaf powder was weighed and dissolved in 120 mL of water. The suspension was fermented for half a day, eventually strained and poured into a liter of water. 20 g of detergent (emulsifier) was measured and thoroughly mixed with the extract to ensure uniform distribution of active ingredients while seedling beds were treated. Seedbeds were immediately covered with a layer of soil after the extract was sprayed to reduce rapid evaporation of extracts from the bed. On the other hand, a well-prepared 5 kg of wood ash was weighed and spread uniformly to the seedling beds. Eventually, the ashes were properly mixed with the soil ahead of sowing the seeds of hot pepper. Unlike the botanicals, the ash was spread a day ahead of sowing the seeds of the vegetable crop.
Data collection and analysis
The seedling beds were regularly monitored every seven days until seedlings were ready for transplanting. Basic data such as the number of seedlings at 75% seedling emergence, number of seedlings at 16 days after seedling emergence, seedling survival rate at 16 days after seedling emergence, number of seedlings at transplanting and number of damaged seedlings at transplanting were collected and subjected to statistical software for analysis. SAS Statistical Software Package (SAS, 2001) was employed both for analysis of variance and for determination of mean separation among differently treated seedling beds. The prevention and infestation rate (percentage) of management practices were determined based on the following formula:

Cost-benefit analysis
The partial budget analysis was manipulated to assess the economic feasibility of new management options of termite to be imposed on the agricultural business. It was implemented to organize data and generate information about the cost incurred and the benefits gained from various agricultural options. The marginal rate of return was used to measure the effect of investing additional capital on net returns of the newly implemented management options compared with the existed practices. It provides the value of the benefit obtained from the additional cost being incurred. The partial budget analysis was done based on the additional cost incurred to the variable and fixed costs to each of the management practices. Nevertheless, it was considered that the total costs incurred for land rent were equal to both management practices. Therefore, the impact on the additional rate of return remains constant among management options. The price of the input (cost of chemicals, botanicals, ash and the labour cost) and the products (seedling price) were determined based on the seasonal market prices at the local market. Finally, the marginal rate of return (MRR) was determined as suggested (Kelly et al., 2005) as below: 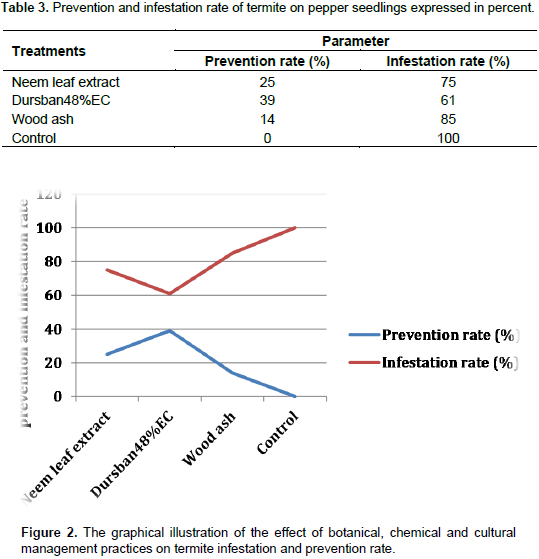 Cost-benefit analysis of management practices
The cost-benefit analysis result provides the necessary information about the economic feasibility of management practices and to reach possible recommendations. It was noticed that any management options with net benefits less than or equal to those options with lower cost were considered to be inferior (dominated). Accordingly, the highest net benefit was gained on management options with additional expenditures of 450 Birr. However, the expenditure that appeared to be more attractive was determined based on the result of the marginal rate of return. Thus, the maximum net benefit of 74020 Ethiopian Birr with the average marginal rate of return (42.64 Birr) was generated from application of neem leaf extract compared to the use of chemical spray with dursban (35 Birr). That means for every one Birr additional investment on using neem leaf extract for management of termite will result in 42.64 and 74020 Birr of return and net benefits gain, respectively. This implied that the use of neem leaf extract to manage termite was economically feasible compared to additional investment in chemical spray using dursban. For every one-birr investment in application of Dursban, there was 35 Birr rate of return plus 15730.5 Birr net benefit (Table 4). In general, the higher net benefit was gained through application of neem leaf extract with minimum input difference. This indicated that farmers would be profitable if they apply Neem leaf extract as management options of termite on seedling beds of hot pepper throughout Tanqua Abergelle district and in other locations where termite is a serious constraint in production pepper.