Effects of waterlogging on growth, biomass and antioxidant enzymes on upper ground and roots of two peony cultivars

Tree peony (Paeonia suffruticosa Andr.) is a perennial deciduous shrub with ornamental and medicinal value. Waterlogging stress is an agricultural problem for peony in Jiangnan of China. This study investigated the growth, biomass, cell membrane permeability and antioxidant enzymes of two P. suffruticosa cultivars ‘Feng Dan Bai (FDB)’ and ‘MingXing (MX)’. The response of roots and upper ground to different levels of waterlogging stress in two peony cultivars was also evaluated. Results showed that mild waterlogging stress (MWS) and severe waterlogging stress (SWS) significantly decreased the increment of seedling height, diameter and biomass of leaves. The root biomass increased in FDB but no significant changes in MX. Moreover, cell membrane permeability of leaves and roots also increased, while the chlorophyll content of leaves decreased. Antioxidant enzyme activities of superoxide dismutase (SOD), peroxidase (POD), and catalase (CAT) of leaves and roots all increased, along with a gradual increase in malondialdehyde (MDA). Of this two cultivars, the root system of FDB is more susceptible to waterlogging than the upper ground, and the root system can improve the resistance to waterlogging by increasing the root system biomass, Peony adapted to the waterlogging environment by changing its external form.

Tree peony (Paeonia suffruticosa Andr.) is a perennial deciduous shrub of excellent ornamental and medicinal value. It is indigenous to China where ornamental cultivation has a history of more  than  2000  years  (Li  et al., 2009; Picerno et al., 2011). Because of its large flowers, range of colors, attractive shape and fragrance, tree peony has attracted increasing attention around the world both as a  pot  plant  and for  cut  flower  production
(Han et al., 2008). There are nearly 3000 cultivars of peony in China. Four large tree peony groups have been described of the central, northwest, southwest, and Jiangnan peony groups; the variety of peony in Jiangnan group are the least (Zhang et al., 2007). Peony has large flowers of ornamental value. In recent years, oil peony has also been suggested as an important oil crop. Understanding the factors affecting peony cultivation in Jiangnan of China is important in terms of cultivation management. Changing rainfall patterns have resulted in increased flood events in many regions, so that development of flood tolerant crops is a priority (Yamauchi et al., 2017). Jiangnan of China has a subtropical to tropical monsoon climate. Rainfall is also frequent and heavy during the peony growth period. As a result, the duration of waterlogging is relatively long, often up to 6 months (from April to September), the growth of peony was affected by the waterlogging. Because of this climate, only about 20 peony cultivars remain in Jiangnan group, with some rare cultivars such as 'Ziyunfang' and 'fengwei' are on the verge of extinction. Therefore, understanding the characteristics of waterlogging tolerance in peony is important in terms of selecting cultivars suitable for growth in Jiangnan regions of China. In line with this, determining the physiological and biochemical characteristics under waterlogging stress is important from both a theoretical and practical viewpoint.
Waterlogging is a major abiotic stress to plants. Globally, it is estimated that 10% of all irrigated land is affected by waterlogging, which might reduce crop productivity as much as 20% (Ren et al., 2016). Waterlogging disturbs plants growth and development, delays growth process, leading to a significant morphological response to stress (Ghobadi et al., 2017; Sauter, 2013; Huang et al., 2015). Waterlogging results in an anaerobic environment, which inhibits aerobic respiration in the mitochondria, inducing anaerobic respiration in the root system. As a result, electron transport is blocked and ATP cannot be produced via the aerobic pathway and the cells rapidly suffer an energy crisis that can lead to cell death, resulting in the accumulation of a large amount of reactive oxygen species (ROS) (Le et al., 2017; Jin et al., 2010; Lesk et al., 2016). Overproduction ROS and subsequent oxidative stress may be the common mechanism of phytotoxicity and cause of damage to important organic constituent of plant cells (Petrov et al., 2015). To eliminate the toxic effects of ROS, plants have different enzymatic or non-enzymatic antioxidants, signaling pathways and metabolites (Ahammed et al., 2013). Rapid biochemical changes are easily induced through short-term soil waterlogging, however, anatomical and morphological changes such as the formation of adventitious roots, hypertrophied lenticels and aerenchyma are more likely to be involved in long-term acclimation (Yamauchi et al., 2017).
Plant responses to waterlogging also  vary  by  species, genetic characteristics, age, waterlogging duration and waterlogging depth (Zhou et al., 2017; Nyman and Lindau, 2016). While extensive research has been carried out on ROS-induced injury and plant defense response systems under waterlogging stress (Wang et al., 2016; Pociecha et al., 2016). Roots and upper ground part of plant will be destroyed when plants are under waterlogging stress; little is known about the relationship between roots and upper ground parts. The physiological and biochemical changes in peony under different levels of waterlogging stress were studied (Kong, 2011), but little is known about the differences between water-tolerant species and water-sensitive species. Long-term field observations suggest that the ‘Feng Dan Bai (FDB) cultivar is highly tolerant of natural waterlogging conditions. In contrast, the MX is unable to survive for long time under waterlogging stress. Despite of this, little is known about how waterlogging affect growth, morphology, physiological and biochemical characteristics in Jiangnan of China and wetland areas.
The purposes of this research were the following: (1) assessment of the damage of waterlogging in tolerant and sensitive peony used in the region in different degree of waterlogging separately; (2) evaluation of quantitative traits such as roots and upper ground parts growth and other physiological characteristics; and (3) study of stress tolerance indexes in peony varieties, clarifying the mechanisms of waterlogging tolerance in peony. The results of this study will provide a theoretical basis for breeding and cultivation of waterlogging-tolerant cultivars suitable for growth in the Jiangnan of China.

Plant and growth conditions
Experiments were conducted in Zhejiang A & F University, Zhejiang Province, China (N29°71Ê¹, E120°23Ê¹). Four-year-old healthy FDB and MingXing (MX) seedlings were planted in plastic containers (top diameter: 27 cm; height: 22 cm). A completely randomized design was followed with three replications per treatment and three plants per replication. Containers (18) were used in this experiment. Each container was filled with a mixed matrix consisting of garden soil, sand and perlite (v/v/v = 5: 3: 2, pH 6.4), the depth of soil was 16 cm and grown in a shaded greenhouse with natural sunlight during the day and relative humidity of 65% (±5%). The temperature of greenhouse was 20 to 25°C.
Experimental treatment
In June 2016, three waterlogging stress treatments were implemented as follows: control, standard nutrient-water management with a soil moisture content of 75% field capacity (control by weigh); mild waterlogging stress (MWS), with a flood height of 4 to 5 cm lower than the soil surface; severe waterlogging stress (SWS), with a supersaturated soil water content of 4 to 5 cm above the soil surface. A completely randomized design was followed with three replications per treatment and three plants per replication. Containers (18) were used in this experiment. All other environmental  conditions   were   kept   constant   throughout   the experiment. All measurements were determined simultaneously after 15-days treatment.
Determination of growth parameters
Seedling height was measured with a tape and ground diameter with a vernier caliper at a height of 6 cm from the soil surface. Each plant was measured twice then the average determined. After measuring height and ground diameter, one intact plant per each treatment replicate was uprooted for roots and upper ground biomass analysis. Green tissues and roots were oven-dried at 65°C to a constant weight then weighed using an electronic scale to determine biomass. All measurements were determined simultaneously after 15-days treatment.
Measurement of leaf chlorophyll
The chlorophyll content was measured using the portable chlorophyll apparatus (SPAD-502Plus).
Cell membrane permeability
Membrane permeability was estimated by measuring the relative electrolyte conductivity in the leaves and roots according to Shi et al., 2006. Discs (0.2 g) were briefly rinsed with deionized water then immersed in a test tube with 30 mL deionized water for 12 h. Initial electrical conductivity (EC) of the solution was subsequently measured with a conductivity meter (Model DJS-1C, Leici, Shanghai). The samples were then heated at 100°C for 20 min and final EC in the bathing solution re-read. Membrane permeability was calculated as EC (%) =initial EC / final EC × 100%.
Superoxide dismutase (SOD), peroxidase (POD) and catalase (CAT) activities
Leaf tissue samples (0.5 g) and roots (0.5 g) were cut into pieces then ground in 10 ml of 50 mmol phosphate buffer (pH 7.8) containing 1% (w/v) polyvinylpyrrolidone (PVP), respectively. The homogenate was centrifuged at 10,000 × g for 15 min at 4°C, and the supernatant used to determine SOD and POD activities. SOD activity was determined based on the inhibition of nitroblue tetrazolium reduction to blue formazan via superoxide radicals (Ries, 1977). The reaction mixture (3 ml) consisted of 50 mmol potassium phosphate buffer (pH 7.8) with 0.3 mol ethylene diaminetetraacetic acid, 39.15 mol methionine, 0.225 mol nitroblue tetrazolium, 0.006 mol riboflavin and 0.05 ml enzyme extract.
POD activity was determined using the guaiacol method (Sun et al., 2011). The reaction mixture (3 ml) contained 0.05 ml enzyme extract, 2.75 ml of 50 mmol phosphate buffer (pH 7.0), 0.1 ml of 1% H2O2 and 0.1 mL of 4% guaiacol solution. The increase in absorbance at 470 nm due to guaiacol oxidation was recorded for 2 min then one unit of enzyme activity defined as the amount of enzyme causing a change in absorbance of 0.01 per min.
CAT activity was determined by tracking the consumption of H2O2 at 240 nm for 3 min (Aeby, 1984). The assay mixture (3 ml) consisted of 100 mmol potassium phosphate buffer (pH 7.0), 15 mmol H2O2 and 50 ul leaf extract.
Malondialdehyde (MDA) content
MDA content was determined according to the method of Jin et al. (2011). The degree of lipid peroxidation was determined from the content of 2-thiobarbituric  acid  (TBA)  reactive  metabolites.  Fresh leaf tissue and roots were respectively homogenized and then extracted in 10 ml of 0.25% (w/v) TBA dissolved in 10% (w/v) trichloroacetic acid (TCA). The extract was heated to 95°C for 30 min then cooled quickly on ice. Absorbance of the supernatant was measured at 532 nm after centrifugation at 10,000 × g for 10 min, and correction of non-specific turbidity carried out by subtracting the absorbance at 600 nm.
Statistical analysis
Data were analyzed using analysis of variance (ANOVA) with SPSS version 19.0. Means were separated by calculating the least significant difference (LSD), and simple correlation analysis to determine the relationship between each physiological variable. 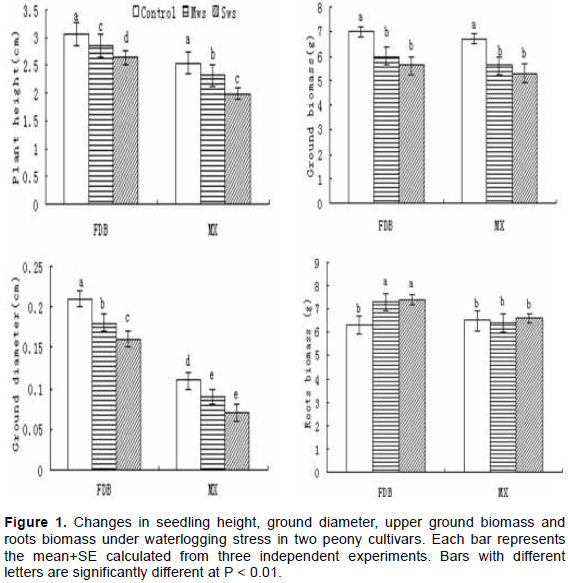 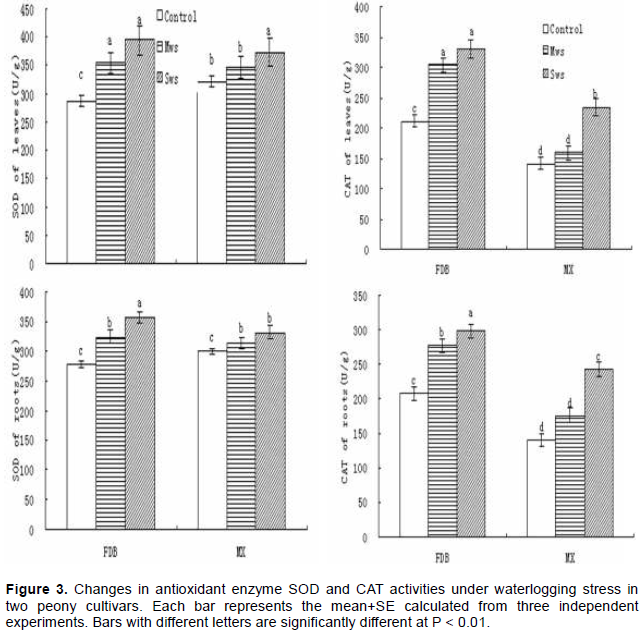 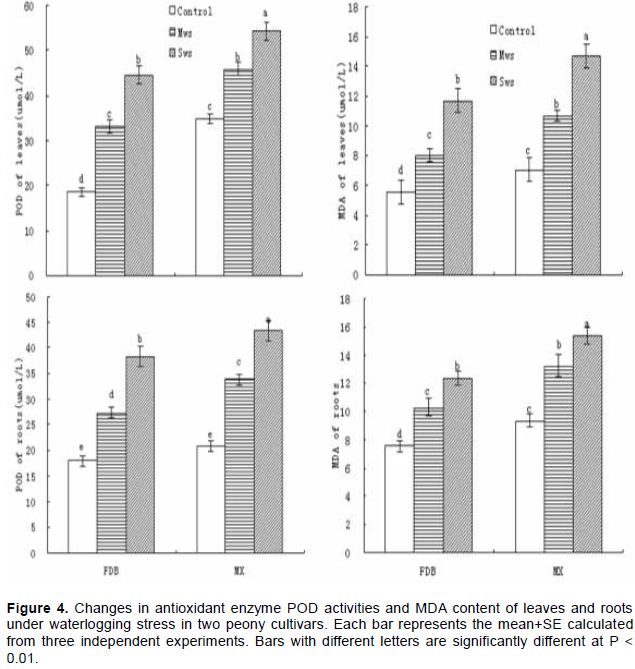