Review on effect of population density and tuber size on yield components and yield of potato (Solanum tuberosum L.)

Population density and seed tuber is an important agronomic management practices in the production of potato (Solanum tuberosum L.). However, potato farmers in Ethiopia often use random population density and tuber sizes, which contribute to the low yield of the crop. Thus the objective of this study is to review effect of population density and tuber size on yield components and yield of potato. The result of this review shows that the highest plant height and main stems number was found in wider spacing and in medium to large tuber size. In the same way, the number of tuber per plant, average tuber weight and marketable yield increased when potatoes are planted in medium intra row spacing (60 x 30) and using medium (35 to 45 cm) to large (45 to 55 cm) tuber size. However, total tuber number/ha and unmarketable yield increased in closer spacing and medium (35 to 45 cm) tuber size. Thus according to the review to increase total yield and marketable yield, it is better to  use medium plant spacing (60 x 30 cm) and medium-sized tubers (35 to 45 mm). 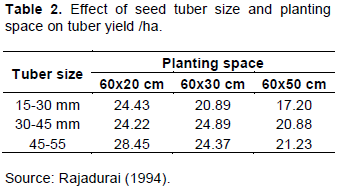 The highest yield was obtained from 65 cm inter row spacing; whereas the lowest yield was recorded at 80 cm inter row spacing. Regarding the intra row spacing the higher total yield per hectare was obtained from 20 cm intra row spacing. As intra row spacing increased from 20-35 cm, total tuber yield decreased from 37.54 to 29.38 t/ha. Intra -row spacing of 35 cm showed lower total tuber yield. It was clearly evident from the result that the yield of seed tuber per hectare increased with decreasing plant spacing. The increased yield was attributed to more tubers produced at the higher plant population per hectare although average tuber size decreased because of increasing inter plant competition at closely spaced plants leading to more unmarketable tuber yield. At closer spacing, there is high number of plant per unit area which brings about an increased ground cover that enables more light interception, consequently influencing photosynthesis (Harnet et al., 2014). Yield performance (kg/ha) was greatest at the medium density level (90 by 30 cm), followed by plants established at 90 by 45 cm. Reducing the intra-row spacing from 45 to 30 cm significantly (p<0.05) increased plant population and subsequently increased the yield (kg/ha) performance. Tuber yield was significantly (p< 0.05) affected by plant density as plants planted at 90 by 30 cm exhibited highest yield performance compared to those planted at 90 by 15 cm and 90 by 45 cm (Michael et al., 2012).