In this investigation, the coding sequence of the drought-stress inducible gene AREB1 in tomato derived from cDNA indicated 100% identity with the reference gene in the NCBI PlantEnsembl database. The protein structure of the AREB1 sequence derived from polymerase chain reaction from tomato DNA template was done using ExPASy and its protein parameter tools ProtParam. The structures of AREB1 protein showed a MolProbity score of 1.49. Multiple sequence alignment of AREB1 gene from 20 tomato genotypes revealed a phylogenetic tree with five clusters, each with the same evolutionary trend. The nucleotide sequence analysis showed higher similarities among the selected tomato genotypes. This indicated the conserved nature of the gene among the genotypes.

Tomato (Solanum lycopersicum L.) is a fruit cultivated and consumed worldwide. Mostly red in colour with different sizes and shapes. Though cultivated worldwide tomato is reported to be originated from Western South America (Acquaah, 2008). Tomato fruit has being classified as berry and consumed in different ways, raw, cooked, sauces, salads, and drinks (Singh et al., 2012). Tomato plants typically grow to 1-3 m (3-10 ft) in height. They are vines that have a weak stem that sprawls and typically needs support (Acquaah, 2008). The tomato sizes vary according to the cultivar, in the range of 0.5-4 inches (1.3-10.2 cm) (IPGRI, 2015). Many water deficit (Drought) stress-inducible genes have been highlighted and found to be activated by abscisic acid ABA. The AREB-I gene mutant family are more tolerant to ABA than are the other single and double mutants with respect to primary root growth, and it displays reduced drought tolerance (Takuya et al., 2010). AREB/ABF transcription factors are induced as the result of environmental stresses, only AREB1 is reported to be regulated by ABA-dependent phosphorylation (Fujita et al., 2005). AREB1 needs to be activated fully for ABA (Fujita et al., 2005), Abscisic acid is a plant hormone that regulates many important processes in plant metabolism, such as seed germination and dormancy, opening and closing of stomata, abscission, and adaptation to water stress (Redenbaugh et al., 1992).
There are reports on drought resistant gene (AREB) in tomato; however, to the best of our knowledge, no such report has been published on the AREB gene in a wide range of tomato genotypes, or on the prediction of protein structure and computational protein analysis of the AREB gene in tomato genotypes. Plant breeding through a conventional way to improve drought resistance, in many cases, is too slow due to lack of precise molecular and genetic information on drought tolerance associated genes and their regulations. Nigeria is the largest producer of tomato in Sub-Saharan Africa, and ranks 13th in the world. Notwithstanding, the production faces challenges with storage, distribution abiotic and biotic stresses (GAIN, 2018). This is due to climate change such as increase in temperature, evaporation and drought (He et al., 2003). 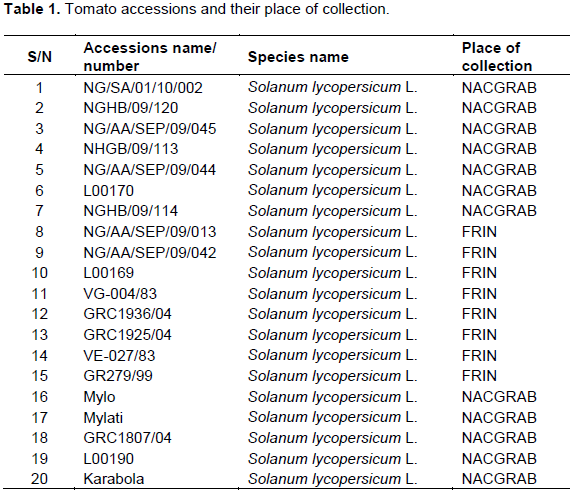 Gene sequencing and sequence submission to gene bank
The PCR products were purified with Gel Extraction Kit, the products were used for sequencing. The forward and reverse contigs was edited and joined to make a complete sequence, which was used for in silico analysis (Molla et al., 2015).
Sequence and phylogenetic analysis
The AREB gene sequences from the DNA of the selected tomato genotypes was aligned with the original reference sequence and edited for SNPs and INDEL detections. The phylogenetic relationship was designed using a molecular evolutionary genetic analysis tool (MEGA).
Computational protein analysis and structure prediction of AREB1 protein
The open reading frame (ORF) of the AREB nucleotide sequence was translated into amino acid using ExPasy translation tool and aligned to the amino acid residue of other sequences of tomato using a multiple sequence alignment tool. The 3-D structure prediction of AREB protein was performed using SWISSMODEL program and NCBI prediction tool (Botstein et al., 1980).
Data analysis
The data obtained from plant DNA was analyzed using bioinformatics software: MEGA, SWISS model and ExPasy tools.

AREB gene amplification The primers designed from the AREB gene of tomato showed amplification in all the twenty selected genotypes after PCR using genomic DNA of each genotype (Figure 1a and b). The PCR products were extracted and purified using gel extraction kit and then sequenced. The products were check on 1.2% agarose gel electrophoresis to view the respective sizes. All the amplified bands studied correspond to 500 bp size with the aid of 1 kb ladder (Figure 1a and b). Gene sequencing The amplified PCR products (Genomic DNA and cDNA derived sequences) were sequenced using next generation contigs (forward and reverse), and edited using Vec Screen software. All of the sequence analyses revealed a 500 bp sequence length. The genomic sequences of the AREB1 gene from 20 tomato genotypes were aligned with a reference sequence of tomato obtained from ensemble plant (Gramene Database), using a multiple sequence alignment method. The aligned sequence revealed the presence of the conserved AREB1 gene throughout the selected genotypes (Table 2).
Computational analysis and structure prediction of tomato AREB genes family
The ExPASy bioinformatic tool was used to translate the DNA sequences into amino acid sequences and to construct the 3-D secondary structure of the AREB1 protein of tomato generated using the SWISS-MODEL program (Figure 2). The structural protein properties predicted by the ProtParam tools had a MolProbity score of 1.49, and Ramachandran favored of 95.83%.
Phylogenetic relationships analysis of the AREB1 gene among the selected tomato genotypes
The phylogenetic dendrogram (Figure 3) was generated using a Neighbor-Joining method, with MEGA software based on the data set from the tomato sequences generated from the product of PCR with AREB1 gene primers. The results showed an optimal tree with the sum of branch lengths that equals 68.50928440. The percentage of replicate trees in which the associated taxa clustered together in the bootstrap test (500 replicates) is shown next to the branches (Figure 3). The evolutionary distances were computed using the Maximum Composite Likelihood method and are in the units of the number of base substitutions per site. This analysis involved 20 nucleotide sequences. Codon positions included were 1st+2nd+3rd+Noncoding (Figure 3).

Sequence alignment of the AREB1 gene from the genomic DNA of the selected tomato genotypes was successfully done using specific primers derived from the AREB1 gene. The DNA isolated revealed a sequence with a 500-bp length, which is similar to some of the reference genes in the Ensembl Plants data base. Sakshi and Kavita (2020) reported that conventional separation by agarose gel electrophoresis results only in a single DNA band and is largely non-descriptive. However, Zhou et al. (2016) reported  that the gene ABF1 was clearly induced by drought, high salinity and ABA treatments, although its expression levels were low even under stress conditions compared with those of AREB1, AREB2 and ABF3. The AREB1 gene along with Dreb gene were identified as a strong genes in the drought responsive pathways in Arabidopsis, tomato, rice and other members of solanaceae (Alves and Setter, 2004). AREB1 gene is found to have a very poor sensitivity for abscisic acid; and, therefore, this suggested that it could be involved in the ABA independent pathway (Barry, 2001).
The local coordinate system was defined using the main chain atoms of each amino acid, as described previously. This is the foundation of neighborhood analysis for each amino acid. The structure shows a property of free proline and glycine betaine which are the major biochemical parameters of abiotic resistance in plants. Free proline contents and glycine betaine are the signals that the plant shows in response to stress and can be used to measure the level of tolerance to a particular stress in plants (Ja’afar et al., 2018). The sequence-based phylogenetic tree generated (Figure 3) showed five distinct clusters with different bootstrap values. Those genotypes in the same cluster are found to be closely related and share a common evolutionary trend.  A similar trend was reported by Molla et al. (2015) for Oriza sativa and Oriza glaberrima with some of the closely related species occupying the same cluster.