In Ethiopia, Lepidium sativum occurs in all regions and agroecology at different altitudinal range. It is not cultivated widely; instead it is cultivated with teff field and available in all local markets. It is not cultivated in large amount as other crops. The main purpose of its cultivation in Ethiopia is for use as a medicinal plant. It is used for human abdominal ache and diarrhea. Moreover, L. sativum is also used to treat skin diseases and other internal problems in livestock.

Despite its medicinal use, there was no genetic diversity study on Ethiopian L. sativum, using morpho-logical and molecular markers. Very few studies have been carried out using morphological markers outside Ethiopia. Hence, this study is proposed to investigate the genetic diversity and population structure of L. sativum populations collected from Ethiopia. Variation was studied using morphological and molecular markers. This will give the overall genetic variability, patterns of distribution and population structure which will be very critical to design sustainable conservation and use strategy.

The ISSR marker assay was conducted at Genetics Laboratory of the Microbial, Cellular and Molecular Biology Program Unit, College of Natural Sciences, Addis Ababa University, Addis Ababa. A total of 10 primers, obtained from the Genetic Research Laboratory (Primer  kit  UBC 900) and  primers used  by Kim et al. (2002)  were used for the initial testing of primers variability and reproducibility.

The polymerase chain reaction was conducted in Biometra 2003 T3 Thermo cycler. PCR amplification was carried out in a 25 µl reaction mixture containing 1 µl template DNA, 13.45 µl H20, 5.60 µl dNTP (1.25 mM), 2.6 µl Taq buffer (10XH buffer S), 1.25 µl MgCl2 (50 mM), 0.6 µl primer (20 pmol/ml) and 0.5 µl Taq Polymerase (3 u/ml). The amplification program was 4 min preheating and initial denaturation at 94°C, then 40 x 15 s at 94°C, 1 min primer annealing at (45/48°C) based on primers used, 1.30 min extension at 72°C and the final extension for 7 min at 72°C. The PCR reactions were stored at 4°C until loading on gel for electrophoresis. The amplification products were differentiated by electrophoresis using an agarose gel (1.67% agarose with 100 ml 1xTBE) and 8 µl amplification product of each sample with 2 µl loading dye (6 times concentrated) was loaded on gel. DNA marker 100 bp was used to estimate molecular weight and size of the fragments. The electrophoreses were done for 3 h at constant voltage of 100 V. The DNA was stained with 10 mg/ml ethidium bromide which were mixed with 250 ml distilled water for 30 min and washed with distilled water for 30 min (Table 1).

To further examine the patterns of variation among individual samples on 3D, a principal coordinated analysis (PCO) was performed based on Jaccard’s coefficient (Jaccard, 1908). The calculation of Jaccard’s coefficient was made with PAST software version 1.18 (Hammer et al., 2001). The first three axes were used to plot the three dimensional PCO with STATISTICA version 6.0 software (Hammer et al., 2001; Statistica soft, Inc.2001). 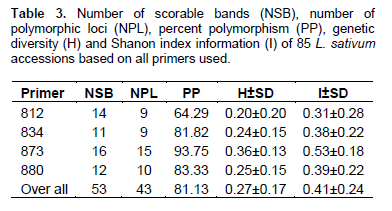 Among the L. sativum accessions evaluated using ISSR markers, samples from Tigray and Amhara exhibited the highest gene diversity (H = 0.24), whereas samples from Oromia had H = 0.17) from SNNPR H = 0.18 and Somali H= 0.18 gene diversity values. The average gene diversity for the total population (HT) was 0.27 (Table 4). 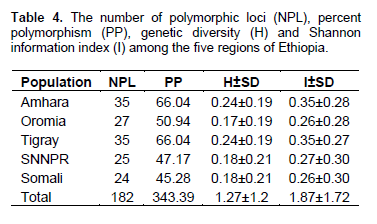 UPGMA and Neighbor Joining tree construction methods was used to construct dendrogram for six  populations and 85 individuals based on 53 PCR bands amplified by two di-nucleotides (812 and 834), one penta nucleotides (880) and one tetra nucleotide (873). The dendrogram derived from neighbor-joining analysis of the whole ISSR data with 85 L. sativum accessions showed four distinct clusters and two sub-clusters within each major cluster.  Most of the individual accessions collected from the same region tend to spread all over the tree without forming their own grouping. The wider distribution of L. sativum accession all over the tree shows the low divergence among populations from different localities. UPGMA analysis based on regions of collection of L. sativum revealed three major groups. The first cluster contains Oromia, Amhara and Tigray; while the second cluster contains SNNPR and individual from unknown origins. The final major cluster contains the Somali group. However, UPGMA with individual accessions showed intermixing of individuals to different groups, except in two groups where individuals from Oromia clustered together (Figure 2). 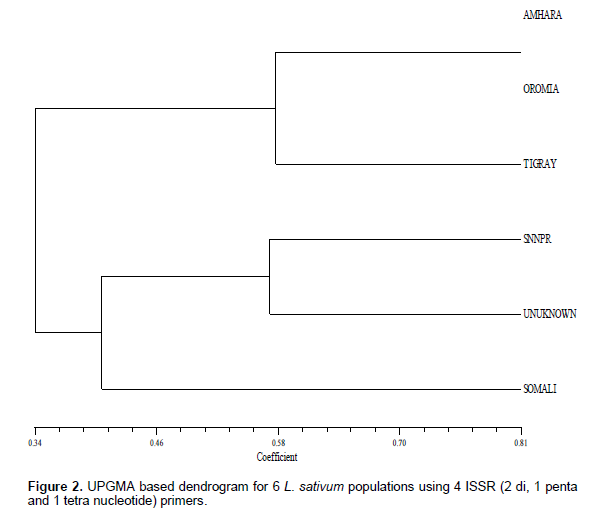 All the data obtained using the four ISSR primers were used in PCO analysis using Jaccard’s coefficients of similarity. The first three coordinates of the PCO having Eigen values of 4.83, 4.55 and 1.63 with variance of 18.28, 17.26 and 6.20%, respectively were used to show the grouping of individuals using two and three coordinates. In 3D, most of the individual accessions that represent different populations spread all over the plot. Using two coordinates (Figure 3 and 4) almost similar result was observed like that of three coordinates. Overall, no clear grouping was observed among individuals collected from different locality. 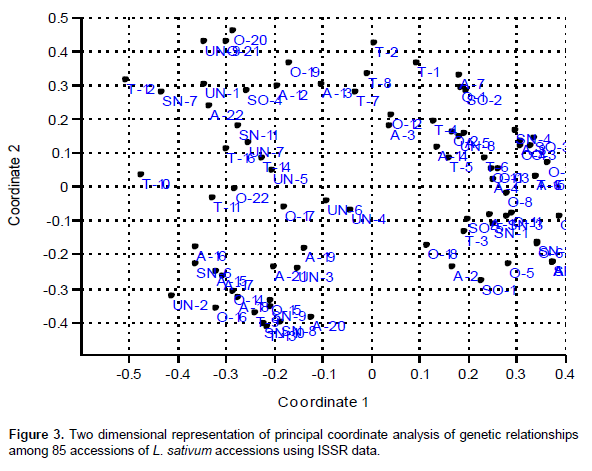 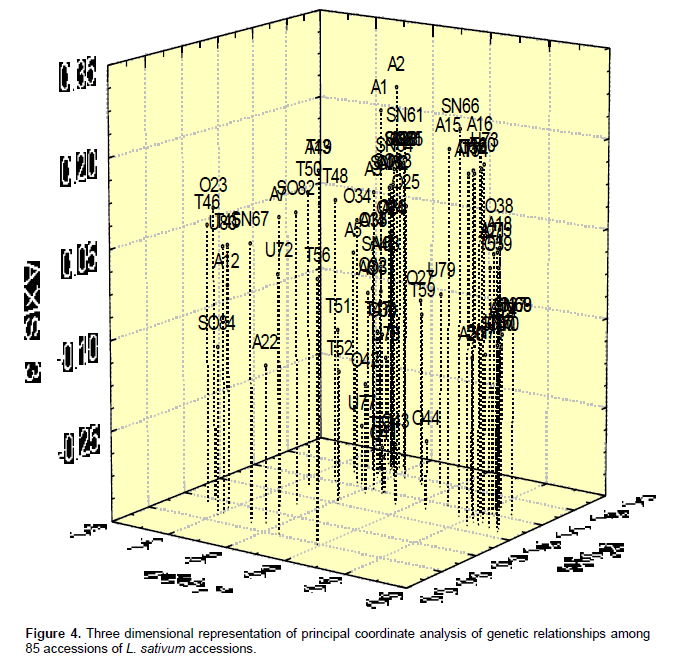 Molecular diversity and its implications for improvement and conservation

In the present study, ISSR was used for the first time to assess genetic variation of L. sativum populations from Ethiopia. This method provides an alternative choice to other system for obtaining highly reproducible markers without any necessity for prior sequence information for various genetic analyses. Because of the abundant and rapidly evolving SSR regions, ISSR amplification has the potential of illuminating much larger number of polymorphic fragments per primer than any other marker system used such as RFLP or microsatellites. ISSRs are regions that recline within the microsatellite repeats and offer great potential to determine intra-genomic and inter-genomic diversity as compared to other arbitrary primers, since they reveal variation within unique regions of the genome at several loci simultaneously. Several property of microsatellite such as high variability among taxa, ubiquitous occurrence and high copy number in eukaryotic genome make ISSRs extremely useful marker for variability analysis (Morgante et al., 2002) ( Figure 1).

In this study, bulk sampling approach was chosen, since it permits representation of the vast accession by optimum number of plants. Yang and Quiros (1993) reported that bulked samples with 10, 20, 30, 40 and 50 individuals had resulted in the same RAPD profiles as that of the individual plant constituting the bulk sample. Gilbert et al. (1999) also reported that pooling of DNA from individuals within accessions is the most appropriate strategy for assessing large quantities of plant material and concluded that 2-3 pools of five genotypes is sufficient to represent the genetic variability within and between accessions in the lupin and similar collections. Edossa et al. (2010) used bulked samples for diversity assessment in lentil collected from Ethiopia. The technique revealed higher genetic diversity, and, therefore, validated the usefulness of bulk sample analyses. Dagmawi (2011) also used bulked sample in germplasm diversity study of sesame populations, and found moderate genetic diversity of both Ethiopian and exotic populations.

The present study shows that out of 53 loci generated by four primers, two di, one penta and one tetra; 43 of them were polymorphic with 81.13% polymorphism. In regions based analysis, Amhara and Tigray showed higher percent polymorphism (66.04%); while, SNNPR and Somali showed least polymorphism with 47.17 and 45.28%, respectively. The same patterns of diversity were observed with gene diversity and Shannon index. Generally, L. sativum populations from Amhara and Tigray showed higher diversity than the other regions.

In general, Amhara and Tigray had good genetic diversity than Oromia, SNNPR and Somali. But this has to be further studied using proper sampling strategy and multilocation comparison.

AMOVA analysis resulted in high genetic diversity within population (94%) and very low genetic diversity among population (6%). This could be due to high seed exchange among different regions and markets which could lead to intermix of populations between regions. Unlike other landraces of cultivated plants, L. sativum in Ethiopia is not restricted to a given area rather it is wildly exchanged among local community and markets. This shows that there is very high gene flow between populations and regions. Jiang et al. (2012) who studied the genetic diversity of Chimonanthus grammatus populations by using ISSR marker showed that there was 73.6% within population variation, whereas the rest 26.4% was due to among population variation. As compared to the present study, there was less gene flow. Jiang et al. (2012) recommended that gene flow, genetic drift and evolutionary history might have important influence on genetic structure and diversity of a given population.

L. sativum is both self and cross pollinated plant (Quirós and Cárdenas, 1998). Hence, the proportion of genetic variation is dependent on the type of pollination that the species undergoes. If the species has large proportion of cross pollination, then we expect high genetic variation within population and less divergence among populations. In addition to pollination, behavior of insects; market exchange could facilitate gene flow among regions which could result in higher percent variation within population and less genetic structure. This is also supported by the spread of individual accessions on UPGMA, NJ and PCO graphs.

Dendrogram of the present study by using UPGMA of Jaccard’s coefficient of similarity showed Amhara and Oromia populations of L. sativum were closely related. Based on this study, the samples with unknown origins could have been probably collected from southern part of Ethiopia since they closely clustered with the SNNPR population.

Analysis of molecular variance for the accessions studied showed that the highest proportion of genetic variation was attributed to within population than among population. It is also highly significant. This confirms that there was a high level of gene flow and low level of genetic differentiation. Based on the UPGMA data, the Amhara, Tigray and Oromia accessions were clustered into one group, whereas the SNNPR and the unknowns in the other cluster. Samples from Somali formed a distinct cluster showing that it is distantly related to accessions from the entire regions.

The authors declare that they have no competing interests.

The authors would like to thank Institute of Biodiversity Conservation for providing germplasms with full passport data of L. sativum assembled from Ethiopia. Technical support from Professor Klaus Mummenhoff and Mr. Mistiru Tesfaye during laboratory and field work is highly acknowledged.