Civil society under assault in Ethiopia

Since the enactment of the Charities and Societies Proclamation 621/2009 in Ethiopia, civil societies were not performing their proper role for the advancement of the country’s democracy. The proclamation places excessive restrictions on the work of civil society organizations in the country. This, in turn, makes the public passive to engage in the politics of the country, rather the law gives ultimate power for the government to control the activities of the civil society organizations (CSOs). Furthermore, the law has a devastating impact on the CSOs activities, both in practical sense, it creates restriction on their area of engagement, and exacerbating climate of fear in which they operate. In the nutshell, the proclamation risks the observance and protection of the democratic rights of every person in Ethiopia.
Key words: Civil society, democracy, human right, proclamation.

Civil society refers to any organizations and associations that stand outside the structure of the government and the market, that is, interest groups, professional associations, labour unions, and ethnic based associations (Teegen and Vachani, 2004; Zaidise, 2004; Swyngedouw, 2005). Civil society is a universal concept and its philosophical foundations are emanated from both the Liberal and Marxist traditions of European Political School of Thought (Bratton, 1994; Lewis, 2006). Tocqueville (a Liberal scholar) on his work Democracy in America, who was the leading liberal scholar preached the role of voluntarism to speed up democratization process and served as a milestone for the creation of democratic citizens (Tocqueville, 1835), whereas, Gramsci (a Marxist scholar) on his book called Selections from the prison notebooks, who was known as a Marxist scholar argued on the importance of social institutions either  strengthening   or   challenging   the   actions   and inactions of the government (Gramsci, 1971; Bratton, 1994; Lewis, 2006). Liberal and Marxist school of thought are contending ideologies by their nature; however, they have common philosophical foundation on the significance of civil society on moulding the behaviour of the government towards democracy (Lewis, 2006).
The modern conception of civil society in Africa was adopted under colonialism and its philosophical foundation is also rooted from the Liberal and Marxist school of thought (Bratton, 1994; Lewis, 2001; Whitfield, 2003; Appiagyei-Atua, 2005). Despite its ugly faces, colonialism has played a pivotal role in the today’s development of civil society in Africa (Appiagyei-Atua, 2005). African civil society does not have adequate social wealth to run their activities independently (Edwards, 2009). This, in turn, makes them toothless to shape the behaviour pattern of governments in the continent (Van de  Walle,  2001).  Mostly,  their  budget  is  coming  from donor organizations, and thus their contribution in enhancing democratic governance is dependent on the will of the donors (Neubert, 2014).
In Ethiopia, civil society has long routes and practiced in a traditional setting even before emergence of a western idea of civil society (Clark, 2000; Bekerie, 2003; Hyden and Hailemariam, 2003; CRDA and DPPC, 2004). However, civil society, later on, embraced the western conception for its development in 1960s (Clark, 2000). In the Imperial regime, civil society existed in the form of self-help associations and their engagements were restricted on humanitarian activities (CRDA and DPPC, 2004). The regime considered them as a quasi-political agent of specific groups in the Diaspora (Hyden and Hailemariam, 2003). On the same token, the Provisional Military Government of Socialist Ethiopia (Derg regime) established a commission called Mass Organizations Affairs Department for establishing and financing civil society (Amdework and Gebre, 2012). Thus, civil societies were suppressed and marginalized by the regime (Clark, 2000). The situation, later on, changed when the Ethiopian People’s Revolutionary Democratic Front (EPRDF) came to power and civil society involvement became visual by addressing the grievances of the people (Teshome-Bahiru, 2009). As a result, the people participated in subsequent national elections in the country (Mulat et al., 2009). Eventually, the ruling party (EPRDF) lost the poll of 2005 national election for the first time. Then, the government unlawfully dissolved the national election result in 2005 by arresting key stakeholders, the regime accused CSOs of their role to enlighten the public (Aalen and Tronvoll, 2009; Teshome-Bahiru, 2009). This situation led to the hostility between the ruling party and CSOs (Teshome-Bahiru, 2009). Then, the EPRDF regime endorsed Charities and Societies Proclamation 621/2009 in 2009 to oust the involvement of CSOs from the political arena of the country (FDRE, 2009). The proclamation has so many controversial laws in regulating the activities of CSOs; particularly article 14 restricts participation of CSOs from advancement of human and democratic rights, promotion of efficiency of justice and promotion of conflict resolution. Additionally, on section 7 of article 84-94 gives ultimate power for the government to exercise and control the activities of CSOs. Furthermore, the government established the Ethiopian Charities and Societies Agency without any consultation with CSOs (ICNL, 2018). With all these weaknesses, the Proclamation divided CSOs into three categories: Ethiopian Charities or Societies are formed under the laws of Ethiopia, whose membership are all Ethiopians, generate income from Ethiopia and fully owned by Ethiopians. These organizations only receive 10% of their resources from foreign sources (Article 2 of CSP 621/2009); Ethiopian Resident Charities or Societies are allowed to receive more 10% of their resources from foreign sources. But, it is not allowed for them to engage in human and democratic rights advocacy activities (Article 2 of CSP 621/2009) and Foreign Charities are formed under the laws of foreign countries, or whose membership includes foreigners, or the organization receives funds from foreign sources. But, engagement on the issue of human right, awareness campaign on democratic rights is not allowed to them (Article 2 of CSP 621/2009) (AI, 2012). Hence, according to the proclamation, CSOs are eligible to work on advocacy, human rights, and good governance, when they produce 90% of their annual budget from local sources and the rest from abroad (Aalen and Tronvoll, 2009; FDRE, 2009). Thus, funding restrictions on the law caused to eliminate civil society organizations in the country (AI, 2012). In this regard, the Charities and Societies Proclamation 612/2009 (CSP) is served as an instrument for the EPRDF regime to curtail the role of CSOs in the country (Aalen and Tronvoll, 2009).
Although, CSOs have a crucial role in a democratic government to address public interest and the power to shape government policies for the well-being of the society in the Western societies (Rosenblum and Post, 2002; Swyngedouw, 2005), CSP 621/2009 focused on humanitarian activities (AI, 2012), rather than to work on advocacy, democracy, and good governance (FDRE, 2009).
The aim of the present study was to assess the impact of the CSP 621/2009 on the engagement of CSOs in promoting and protecting human rights in Ethiopia. Moreover, it aimed to assess and evaluate CSP 621/2009 to disprove the stand of the government to the proclamation. Furthermore, the study indicated the way forward solutions to restore the watchdog role of civil society against the government.

Respondent’s background
Respondent’s background was categorized based on their educational background. This is because the research question was designed categorically to get the perception of the people towards the CSP 621/2009. The result of each category is discussed as shown in Figures 2 to 5.
Educational backgrounds
Large number of respondents laid on Bachelor and then Master holders and the difference was not significant with these two educational background participants (P > 0.05) and with the other educational background (Figure 1).
Based on the finding, majority of respondents have common understanding regarding to CSP 621/2009, but their level of awareness towards the law differs from groups to groups. However, the presence of diverse participants from different academic background makes the finding more representative and reliable to reflect the perception of the public towards CSP 621/2009. The finding has also similarity with the conclusion of Geset (2009) on CSP 621/2009. In her assessment of the proclamation titled “the New Charities and Societies Proclamation and Its Impacts on the Operation of Save the Children Sweden-Ethiopia” respondents were diverse in their status and representing government institutions, civil society organizations, and private sectors and the conclusion of the assessment indicated that the proclamation is known by the public including its challenge on the existence and work of CSOs. In this regard, this finding has similar result and tone to represent the perception of the public on CSP 621/2009. This implies that educational background of the respondents clearly shows the level of understanding and political concourses of the mass towards government policies, laws and decisions of political matters.
General overview of respondents on CPS 621/2009
Large numbers of participants know about the content of the law. The majority of MA and Ph.D. holders of the respondents were very much aware of the law than BA and Diploma holders, and university students. Thus, the level of awareness between MA and Ph.D. holders of respondents was not significant (P > 0.05). However, there were highly significant difference between BA, diploma, and university student group of respondents (P < 0.05) (Figure 2). 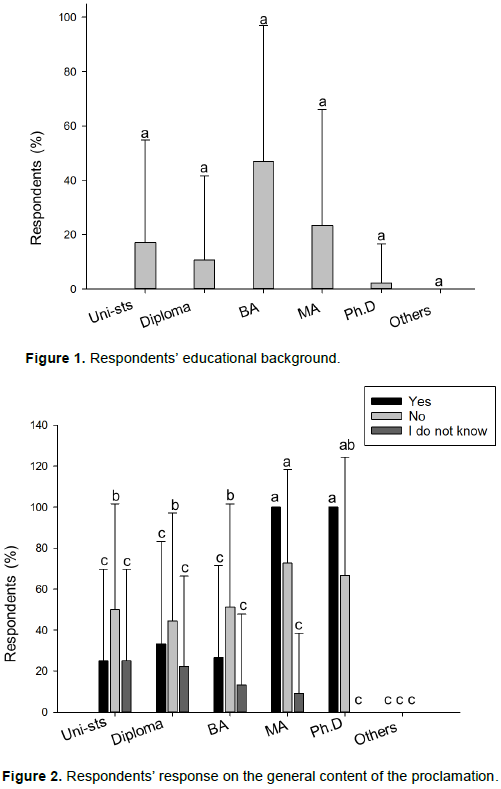 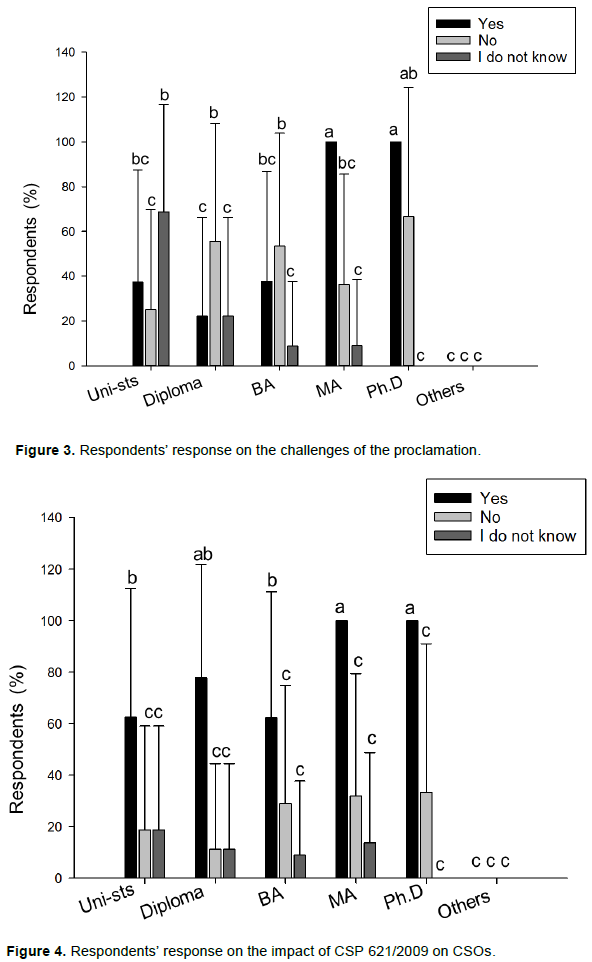 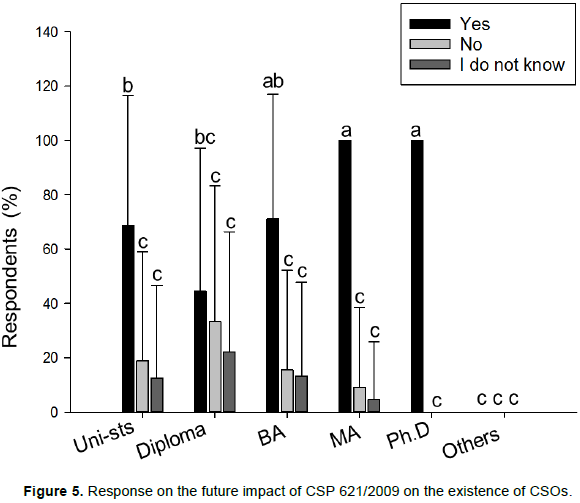 It is very hard to deny the role of CSOs and NGOs in saving tens and thousands of rural masses of Ethiopians by donating food, sanitary services, and health care during the time of famine and hunger for decades.
However, this finding showed that the role of CSOs in enhancing democracy and good governance in Ethiopia is insignificant due to the excessive pressure of the regime since the aftermath of 2005 National Election. This is because the EPRDF regime produced a very suppressive law to curtail the role and existence of CSOs in the country. Nevertheless, majority of the people need amendment on CSP 621/2009 to restore the watchdog role of civil society organizations over the deeds of the government. Therefore, the process of creating space for civil society in Ethiopia is going at a gradual pace, but the finding indicated urgent remedies on the content of the proclamation to restore the role of CSOs in the country’s politics.

The author gratefully acknowledge the support and generosity of the German Academic Exchange Service (DAAD) to join prestigious educational institution for getting the basic of political science to understand the political dynamics of the contemporary world, particularly, the region where he came from. Appreciation goes to Mr. Said Mohammed, a colleague for his support, guidance and overall assistance for the accomplishment of the article and Political Science Library Staff member of University Osnabrück for providing useful reference materials for the production of the article.