This study examined political parties’ ideologies influencing public policy formulation in Uganda’s nascent hydrocarbon industry. The study followed the four research objectives, research questions and hypotheses. The researcher applied a descriptive cross-sectional survey research design to guide the study. The research adopted both quantitative and qualitative approaches and data was collected from 218 respondents. The researcher collected both quantitative and qualitative data which was analyzed using descriptive and inferential statistics and thematic content analysis, respectively. The findings of the study have shown that political ideology contributes to public policy formulation in Uganda’s nascent hydrocarbon industry by 20.7% and it is significant (P=0.000). It can be concluded that political parties’ ideology is an important determinant to public policy formulation. It is recommended that government should ensure the question of ideology is handled from primary education level to university because it is a key factor in public policy formulation. The government should re-introduce civic education in primary schools and political education in secondary and tertiary institutions.

Africa was viewed as a dark, backward and poor continent, but the current discoveries and investments in abundant natural resources especially with hydrocarbons presents a new economicparadigm shift (Hickey et al., 2015). The African continent is now a strategic trade partner with developed economies whose interests have generated new policy and political debates in the young hydrocarbon industry (Taylor, 2006). Africa remains a critical continent to America, Europe and Asian countries in terms of its  rich  mineral  wealth  (Padayachee,  2010). The survival of global the economy is dependent on African natural resources. Ahmadov (2011) explains that the scramble for African natural resources is not over and imperialists have adopted new strategies of funding political parties to influence political, economic and social policies that favour their interests. The nascent hydrocarbon industry has attracted great attention in global geopolitics. The second scramble and partition is specific to oil-rich countries in the world. Countries across the globe  depend  on  fossil  fuels  for  economic  growth
(Hole, 2014). Powerful countries like: USA, Russia, China, France, UK and German continue to dominate global politics through their foreign policies, aid and business partnerships (Mercedes,  1998). Apparently, the oil and gas companies have become instrumental in championing the trade interests of great nations in nascent democracies (Tordo et al., 2011). It is, therefore, imperative for Uganda to venture into the hydrocarbon business with caution otherwise global politics may endanger her peace and security.
Problem statement
The relationship between political parties’ ideologies and policy formulation in Uganda remains a challenge. The ruling party advances a more radical ideological stance with references to patriotism, nationalism and Pan-Africanism. The opposition parties tend to be socialist or conservative leaning. These conflicting ideological stances have influenced public policy formulation to the advantage of National Resistance Movement (NRM) and thus the Executive. The party manifestos reflect the ideological stances of the political parties which have favoured the Executive and as a result given disadvantage to parliament in policy formulation. In the foregoing, this study interrogated the influence of ideology of political parties in the formulation of policies for the nascent hydrocarbon industry.
Research objective
This examines how ideologies of political groupings affect public policy formulation process in Uganda’s nascent hydrocarbon industry.
Research question
How do ideologies of political groups affect public policy formulation in nascent hydrocarbon industry in Uganda?
Hypothesis
H0: Political parties’ ideologies do not influence public policy formulation in nascent hydrocarbon industry in Uganda.

The researcher adopted a descriptive cross-sectional survey design. This design was preferred because a survey research design is useful in collecting views from a large sample.( Mathers et al., 2013) explains that in a cross-sectional research study, the researcher selects respondents who differ on one key characteristic at one specific point in time. Since the researcher intends to obtain in-depth data about the political parties’ ideology influence on public policy formulation in Uganda’s nascent hydrocarbon industry, survey research design was appropriate.
From the population of study of 490 that included members of parliament from four political parties in parliament detailed in Table 1 in accordance with Yamane formula (1967), the sample size of the study was 297 respondents and use of proportions was adopted. 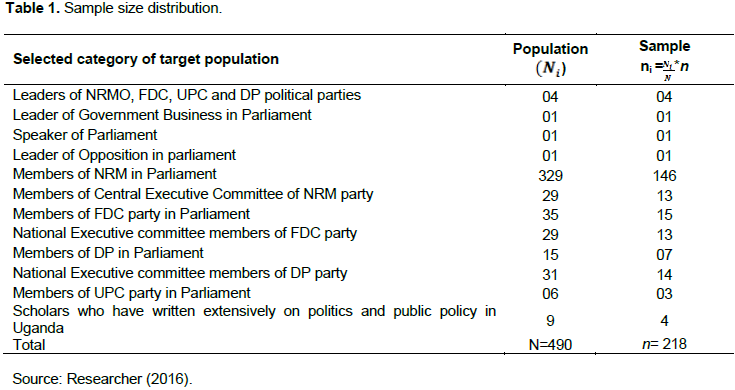 From Table 1, the researcher considered a sample size of 218 respondents selected from a total population of 490.
The study employed probability and non-probability sampling techniques. These include simple random sampling and purposive sampling. The researcher applied simple random sampling to determine the sample size from the population. The researcher selected four political parties out of the 29 registered in Uganda. DP and UPC were selected based on their history in Uganda as old political parties formed before 1962, NRM was selected because it is currently in power and FDC was selected because it is the only vibrant opposition political party in Uganda. Different methods of measuring a party system’s fragmentation can be employed. Aurel and Wolfgang (1998), cite different scholars to explain criteria followed to select political parties for a study. Chunga (2014)counts number of effective parties while using fractionalization index. According to Njoroge (2014), a party must satisfy two criteria in order to be counted as relevant. In the selected Members of Parliament, cluster sampling was employed. Purposive sampling as a sampling technique was also used when the researcher wanted to select key informants as recommended by (Amin, 2005). Using inclusion criteria, leaders of four political parties were considered in this study that included NRM, FDC, DP and UPC members of parliament.
The researcher used survey, interview and documentary review as data collection methods to collect both primary and secondary data. Secondary data included: textbooks, journals, government reports, unpublished thesis and The Hansard. While primary data was collected using questionnaires and interview guides. The researcher used a closed questionnaire drawn to a 5 likert scale. This study used interview method to collect data by directly questioning or talking to the respondents (Zohrabi, 2013). Some research questions were answered better when this method was used. The researcher conducted eight (8) interview sessions and interviews   offered    the   researcher   considerable   flexibility  and respondents interviewed. Standardization of questions was maintained to increase data reliability and replication as much as possible. Content thematic analysis of the information generated was presented through narrations and verbatim quotes of the interviewees and key respondents (Green, 2014). Data were analyzed by making explanations and summaries. Quantitative data were analysed by using statistical tools to reduce the data, summarised them and make the most important facts and relationships apparent. Quantitative data from both the questionnaires and interviews were subjected to statistical analysis using the Statistical Package for Social Sciences (SPSS).

The following recommendations were made according to the first specific objective of the study: The government should ensure that the question of ideology is handled from Primary School level to University level because it is a key factor in policy development. The government through the Ministry of Education and Sports should consider re-introducing civic education in primary schools and political education in secondary and tertiary institutions.
It is further recommended that political party leaders should create a forum within their political parties in which they keenly discuss the issue of political party ideology. It is recommended that government should emphasise refresher courses for political leaders and civil servants in which ideology is given emphasis especially in National Leadership Institutes like Kyankwanzi for both members of serving political party and those in the opposition. Political ideology trainings should be mandatory for all Ugandans.
From study findings and literature reviewed, it is recommended that ideology be emphasised in teaching of Public Administration and Management in Higher Institutions of learning, Think Tanks, Civil Society Organizations and more research be done on the same. All political leaders irrespective of their political party affiliations need to humble themselves and go for political grounding/training in order for them to appreciate the role of political ideology in policy making. Political parties in Uganda should benchmark with their counterparts in China, Cuba, Russia, Netherlands, UK, USA, Malawi, South Africa, Zimbabwe, Ghana, Tanzania, Rwanda and Ethiopia where opposition opposes the political party in power on ideological ground, not on current leadership.
Civil Society Organisations should carry out massive sensitization of the citizens in Uganda about political ideology through radio, Television, village meetings (barazas) such that when leaders come, they are assessed based on party ideology. Political parties should have defined party ideology to guide public policy formulation in Uganda. Political party leaders should orient political party members on party ideology.