The Indian Sarus Crane (Grus antigone antigone), is the world's tallest flying bird and a globally 'Vulnerable' species as per IUCN Red List of Threatened Species. It is the only resident breeding crane in India. Citizen scientists currently play active roles in a varied range of ecological assignments, and their contributions have enabled scientists to collect large amounts of data at minimal cost. eBird is a large citizen science database that contains a large and growing volume of bird count data which has been successfully used to analyze diversity, distributions of bird species. The present work deals with the utilization and presentation of citizen science data to map the distribution of Sarus Cranes in Uttar Pradesh in the last 10 years (that is 2008 to 2017). Mapping is done using Arc GIS 10.2 software and resulted in various patterns of Sarus sightings in the state. The study concluded that a total of 1,902 Sarus documented by 342 social groups or e-birders from 43 districts of Uttar Pradesh. This study showed public participation as an important data collection tool for the species, which has a reportedly large distribution range.

Analyses of any animal population status and change are fundamental actions of conservation and ecological research. Traditionally, the main source of information to estimate the changes in population and trends is counting the individuals. Citizen scientists currently play active roles in obtaining a large scale data ecological project and their contributions have permitted researchers at  the nominal cost. In worldwide, evenly in India, birdwatching is very popular and curiously increasing day by day among the general public and have been supporting the many major bird monitoring program or projects at participating citizen scientists. The Campus Count, Backyard Count, Winter Count, etc., have successfully relied  on  citizen  scientist  to  collect  data  (LePage  and Francis, 2002; Sauer et al., 2005; Dunn et al., 2005).
Citizen science was principally considered as an aspect of educational tools, but it also is a way to collect large sets of data (Brossard et al., 2005; Evans et al., 2005). Due to a lack of manpower and funding, a large-scale set of data could not be gathered, so one way of solving this problem is to involve a cadre of citizen scientists who play a significant role in obtaining the data for the larger ecological projects (Ebersole, 2003). eBird is a large citizen science database that holds a large and increasing capacity of bird count data (Sullivan et al., 2009; Callaghan and Gawlik, 2015; La Sorte et al., 2014; Supp et al., 2015; Clark, 2017; Walker and Taylor, 2017).
The Indian Sarus Crane (Grus antigone antigone), the world's tallest flying bird and a globally 'Vulnerable' species as per IUCN Red List of Threatened Species, is the only resident breeding crane in India. As per the count, Uttar Pradesh shelters approximate 12,246 Sarus Cranes, thus indicating its status of being the biggest Sarus-supporting state in the country (Sundar et al., 2000a; Singh and Tatu, 2000). The present work deals with the utilization and presentation of citizen science data to map the distribution of Sarus Cranes in Uttar Pradesh in the last 10 years (2008 to 2017). The main purpose of the study is to map the distribution of Sarus Crane in Uttar Pradesh so  that  organizations  concerned with the Sarus conservation can use this information in locating and conserving the areas where there are depleting Sarus populations.

Study area
The study was conducted in 2010 across the entire state of Uttar Pradesh (UP). This state lies between 23°52’ - 30°24’ N latitude and 77°5’ - 84°38’ E longitude covering over 294,410 km2. Uttar Pradesh is confined on the Shivalik Range which forms the southern foothills of the Himalayas, slopes down into a boulder bed called Bhabhar, the transitional belt running along the entire length of the state is called the Terai and Bhabhar area. It has rich forests, cutting across it are innumerable streams which swell into raging torrents during the monsoon. Average rainfall varies between 600 and 2,500 mm, most of which comes during the monsoon period of the rainy season. The climate of the state is a tropical monsoon. The average temperature varies in the plains from 3 to 4°C in January to 43 to 45°C in May and June. There are three distinct seasons, winter from October to February, summer from March to mid-June, and the rainy season from June to September. The study includes the whole of Uttar Pradesh which will be divided into Gangetic Plains, Terai area, Semi-arid zone and Bundelkhand region different zones (Figure 1). The study area included protected areas, non-protected areas, rivers, lakes, ponds and the marginal areas including, agricultural field, paddy and human habitations. 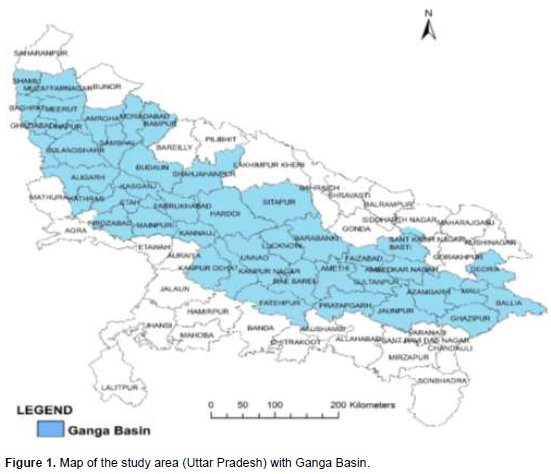 Data collection
Permission was given to access the data and downloaded the complete eBird basic dataset and again reduced it to checklists from 2008 to 2017. Checklists of Sarus are based on the spot identifiers observations of the bird populations. The incomplete checklists or data and repetitions of spot identifier were eliminated and shortened the repetitive data sets. Once the population trends for the species were estimated, only checklists from eBird locations were used as defined by the “locality ID” and GPS locations, with at least one record for the species. The citizen scientists observed the different numbers of a species at particular sites and GPS; the maximum number of count of the species at those particular locations was determined and others were eliminated. Some of the reported sites were verified during 2008 to 2017 by visiting the individual locations by numerous citizen scientists by the web survey. The survey involved questions related to: the species' location, group size, (that is, the total number of birds present in each sighted group) and current conservation concerns. Population changes were also analyzed for distribution of species that occur on the study area and awareness and concern of local birders, students and public related to species conservation.
Statistical analysis
Mapping was done using Arc GIS 10.5 software and resulted in various patterns of Sarus sightings in the state. Maps were prepared showing sighting and distribution patterns of Sarus and the comparison of sights in different years. Other statistical data were managed by IBM SPSS software version 20.

Indian Sarus Crane (Grus antigone antigone) is one of the tallest flying birds of the world with 1.5 to 1.8 m height and is the only resident breeding crane found in India and south-east Asia (Meine and Archibald, 1996; Singh and Tatu, 2000). Uttar Pradesh is considered to be the stronghold of the Sarus, with the largest population within India. But substantial data collection and records are not available for Uttar Pradesh. In this study, adult, sub-adult and juvenile individuals were enumerated during observations by citizen scientists who reported the data. Most of the individual Sarus were seen in wetlands, ponds, lakes and agricultural fields, because Sarus is a wetlands birds and depends on water for their breeding, feeding and foraging (Kumar and Kanaujia, 2017). Sarus cranes have a preference for shallow water zones and avoid deeper sites and other wetlands for their habitation (Borad et al., 2001), the preferred nesting sites of  Sarus are in marshlands and rice paddies (Sundar, 2009), with varying water depth between 25 and 65 cm (Mukherjee et al., 2000). Population fluctuations across habitats by Sarus are extremely dependent on season (Mukherjee, 1999). Preferred foraging habitats of Sarus cranes include shallow marshes, lakeshores, small streams, and upland pastures (Scott, 1993). Sarus completes its whole breeding cycle in or near the wetlands. Some earlier reports of the demography and habitat use by Sarus Cranes can be found in the report by Vyas (2002).
A total of 1,902 Sarus were documented by 342 social groups or e-birders from 43 districts of Uttar Pradesh from 2008 to 2017. There were no observations recorded from 32 districts. Sarus Cranes are normally seen in pairs, or family  groups, and form congregations up to 55.
Based on studies done in Gujarat the population is estimated to be 1,730 (Singh and Tatu, 2000). The number estimated for Rajasthan is 332 and other states 183 (Sundar et al., 2000a), while 168 were reported in trans-Indian Nepal Tarai (Aryal et al., 2009).
Maximum numbers and distribution of Sarus Crane were observed in Ganga basin and a minimum in Bundelkhand region. The probability of occurrence in wetlands is maximum near the Ganga basin of Uttar Pradesh; because the ground water level is maintained due to the proximity of the Ganga River, which is an indicator of, and favorable habitat for, Sarus breeding and feeding. On the other hand, the Bundelkhand region is a water-scarce area or drought-prone area, so the number of observations of Sarus is declining in this area. The population status of the Sarus in Lalitpur and Jhansi face severe climatic misfortunes; and this is a backward region regarding the importance of wetlands and its biodiversity (Kushwaha et al., 2018)
The overall number of sightings increased every year with some declines in-between; that is, four in 2008, 40 in 2009, 22 in 2010, 50 in 2011, 20 in 2012, 29 in 2013, 119 in 2014, 139 in 2015, 926 in  2016, and  553  in  2017.  In comparison, the number of sightings for all consecutive years shows that the Ganga Basin of Uttar Pradesh (21 districts) has the maximum number of sightings every year. Etawah and Mainpuri districts are the major sites with maximum sightings throughout the study period (Mukherjee et al., 2002a; Sundar 2009; Chaudhary et al., 1999; Archibald et al., 2003; Sundar, 2005). Though citizen science is a very useful tool for data collection, it also has its limitations. Great care has to be taken to verify as much as possible what is reported, and also to explain carefully how the data was generated and how it can be understood or used. There are very few reports on Sarus distribution or its presence based on available published records, and this is one of the more complete records currently available.

This innovative study involved public participation as a significant data collection tool for the Sarus crane species, which has an apparently broad distribution range. The  results  reported  in  this  study  suggest  that Sarus Cranes are fairly persistent in the Ganga basin near the wetlands, ponds and lakes, but mostly prefer to inhabit in pairs; which strongly indicates that their distribution pattern is largely in the Ganga basin. As a conclusion, we consider wetlands as the primary habitat of Sarus during the breeding season. In the meantime, during the non-breeding season, Sarus also prefers agricultural fields of wheat and rice paddies for feeding and to congregate for pairing. This study revealed that in spite of declines in population and breeding pairs at the global level, the number of Sarus Crane in Uttar Pradesh has a good number of Sarus, especially relative to India. This data can also be used to study the population trends, and even to perform occupancy modelling and habitat modelling, of Sarus Crane in Uttar Pradesh.

The authors thank the Head, Department of Zoology, University of Lucknow and Director, ONGC Center for Advanced Studies for providing facility and administrative support. They are also thankful to the all the citizen scientists and e-birders of the Uttar Pradesh whosoever has given primary and secondary information about the status and occurrence. Special thanks to eBird to provide the data of Sarus Crane.