Human-wildlife conflict presents an increasing challenge to conservation biology worldwide, and developing novel solutions for the coexistence between humans and different species, particularly carnivores, has been a  research focus (Dickman, 2010; Gehring et al., 2010; Woodroffe et al., 2005).  Conflicts escalate when carnivores attack livestock, thereby hampering carnivore conservation (Gehring et al., 2010; Megaze et al., 2017; Treves & Karanth, 2003; Woodroffe et al., 2005). Livestock depredation by large carnivores negatively impacts coexistence between humans and such species (Holmern et al., 2007; Karlsson and Johansson, 2010; Mwakatobe et al., 2013). Livestock represents a source of income to pastoralist communities (Mwakatobe et al., 2013). Hence, if depredation incidences increase, household livelihood quality tends to be compromised (Ogada et al., 2003). Additionally, as the human population grows, particularly in third world countries, human-carnivore conflict increases (Pirie et al., 2017) which hampers the future of large carnivores.
In rural areas, especially those close to protected areas, land for livestock husbandry is open access, which attracts pastoralists to such places. Most people in Africa live in rural areas and there are many trade-offs encountered by people living adjacent to protected areas. The livelihoods of such societies have been compromised due to the costs associated with wildlife interactions (Adams and Hutton, 2007; Nana and Tchamadeu, 2014; Vedeld et al., 2012). Thus, people living adjacent to protected areas tend to have negative attitudes towards wildlife as they impact their livelihoods negatively (Dickman et al., 2014; Romanach et al., 2007; Røskaft et al., 2007). For instance, some communities tend to respond to attacks on their livestock by killing carnivores (Kissui, 2008; Lindsey et al., 2013; Mwakatobe et al., 2013).  Living close to protected areas may have enormous costs, and the human-carnivore conflict in such communities is high (Carter et al., 2012; Holt, 2001; Lindsey et al., 2017).
To reduce livestock depredation, local people may employ various traditional husbandry techniques to kill problematic carnivores, with certain techniques being more effective than others (Ed and John, 2001; Lyamuya et al., 2016b; Mwakatobe et al., 2013). Most of these techniques are temporary and inefficient, therefore a long-term solution is needed (Dickman, 2010). Measures to curb livestock depredation by wild carnivores includes different approaches depending on the culture and livestock keepers (Dickman, 2010). Countries with no consolation schemes for livestock losses from predators use herders, who have developed different guarding techniques. Guarding livestock against depredation has been a successful tool in countrieswhere labour is cheap (Lyamuya et al., 2016b). In the modern world, however, as in Norway, livestock are allowed to roam freely without shepherds because labour costs are high (Widman et al., 2017).
Livestock guarding elsewhere, for instance in the Maasai and Sonjo communities in Tanzania, is a family obligation and is mostly performed by boys and girls who are denied access to school by their parents (Ikanda and Packer, 2008). Thus, they might be less motivated to perform their duties effectively due to lack of incentives (Maclennan et al., 2009). Additionally, the Maasai and Sonjo communities own large flocks of livestock, and herding a large flock might reduce protection from predation. It is easier for carnivores, such as African wild dogs, which normally move in packs, to sneak in and attack large herds of livestock (Lyamuya et al., 2016b). Many studies in Africa have focused on quantification of reported livestock depredation by wild carnivores in relation to the distance from protected areas. Such studies have been conducted in low human density areas adjacent to protected areas (Holmern et al., 2007; Kissui, 2008; Mwakatobe et al., 2013; Patterson et al., 2004; Rasmussen, 1999).
Few studies have evaluated how tribe, age and education may affect how people report numbers of depredated livestock. Each tribe has its own way of living which may influence how people report livestock depredation by wild carnivores. Age can be a predictor of wealth associated with livestock in pastoralist tribes, while education will elucidate whether educated people have more efficient methods of protecting their livestock against depredation. We performed a comparison study between the two tribes (Maasai and Sonjo) to quantify reported livestock depredation by wild carnivores and assess the techniques preferred by both communities in protecting their livestock against depredation.
The presence of large carnivores in any ecosystem is important due to their vital ecological and economical roles (Durant et al., 2011). Monitoring livestock depredation (Spira, 2014) and assessing the preferred techniques used by local communities to safeguard their livestock is therefore relevant to develop good, solid coexistence measures that will enhance the future of all existing carnivore species in the face of human populations.
In this study, we addressed three objectives:
(1) To assess if tribe (Maasai and Sonjo), age and education have an effect on the number of livestock reported depredated in a questionnaire;
(2) To determine wild carnivore species responsible for livestock depredation and;
(3) To assess the preferred techniques of protecting livestock from carnivores within the two ethnic groups.

Study area
The study was conducted in the Eastern Serengeti ecosystem, in the Loliondo Game Controlled Area (LGCA; Figure 1). The LGCA lies between 1°40′S and 2°50′S and 35°10′E and 35°55′E, covering a total area of about 4,500 km2 in the Maasai land (Lyamuya et al., 2014a). On the northern side, it borders Narok County (Kenya), on the western side it borders Serengeti National Park (SNP), and on the southern side it boarders the Ngorongoro Conservation Area (NCA). The area includes diverse vegetation types, ranging from forests, woodlands, wooded grasslands, shrub lands, and grasslands (Lyamuya et al., 2016a). Administratively, the area is under control of the District Council, and the District Game Officer (DGO) manages tourism hunting in the LGCA. 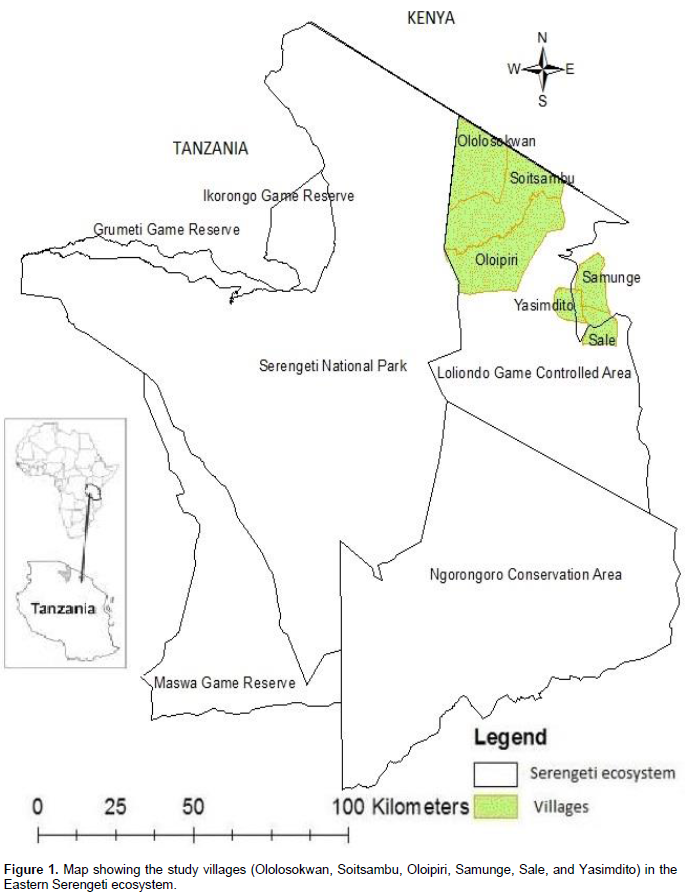 Hunting without a licensed permit is illegal (MNRT, 2013), and hunting concessions are under the Ortello Business Company of Saudi Arabia. LGCA is the home to the Maasai and Sonjo tribes, the former tribe being dominant. The Maasai people are pastoralists, whereas the Sonjo people are agro-pastoralists (Lyamuya et al., 2014a; Maddox, 2003), where both tribes keep cattle, sheep and goats. An increase in the human population has reduced the available grazing space and resulted in the increasing livestock population grazing on a smaller piece of land results in land and environmental degradation (Lyamuya et al., 2014a). The Maasai people live close to the park boundary, while the Sonjo people live slightly further away (Lyamuya et al., 2016b). Thus, carnivore abundance is higher in the Maasai land compared to the Sonjo land (Maddox, 2003).
Data collection
Data collection was performed from September to November 2016. A sample size above 100 respondents tends to give a broader idea about the information given by respondents, and reduces the biasness of the data (Delice, 2010). We collected data from six villages, in each of which we randomly selected 30 respondents to acquire better details and to ease the data collection work. To be objective we employed a random sampling technique which reduces bias and allows us to cover most of the villages.  A total of 180 respondents were interviewed from six villages, including three villages from the Maasai tribe (Ololosokwan, Oloipiri, and Soitsambu) and three from the Sonjo tribe (Yasimdito, Samunge, and Sale). From each village, 30 respondents were randomly selected. Only one respondent was interviewed from each household. We used local people to introduce us to all interviewed households to acquire confidence and readiness to speak openly.
After arriving at a household, we introduced the project and asked if they were ready to answer the questions regarding livestock depredation by wild carnivores. All interviewed persons agreed to give the requested information and we assured them to use their information only for the purpose of our research and as advice to the government. Additionally, we assured their anonymity by hiding their identities. More males were interviewed than females because in the Maasai and Sonjo tribes, men speak on behalf of the household. Females are never allowed to speak openly in the presence of their husband.  Therefore, the sample included more male (n = 144) than female (n = 36) respondents, as females were interviewed only in the absence of their husband. The survey was conducted through a semi-structured questionnaire employing face-to-face interviews, and questions were in both closed-ended and open-ended.
The language of the interview was Swahili for those respondents who spoke it well, and sometimes, a mix of Maasai and Sonjo languages were used by local translators for those respondents who did not understand Swahili clearly. The information gathered from the respondents was: tribe, gender, age, education level, whether their livestock had been attacked by large carnivores over the last twelve months in the boma or in the pasture (yes, no), when was the last livestock depredation (year), what was the time of depredation, where did the depredation occur, what type of livestock were depredated (cattle, sheep, and goats), what was the number of livestock depredated, what was the carnivore species responsible for the depredation, and what were their herding equipment preferences (Figure 1).
Data analysis
Statistical analysis was performed using the Statistical Package for the Social Sciences (SPSS) version 21 (IBM, 2012).The significance level was set to be below 0.05 (p < 0.05). Binary logistic regression analysis (enter method) was performed to determine the probabilities of perceived number of carnivore-induced depredations. Independents variables in the model were (tribe, age and education). One-way analysis of variance (ANOVA) tests were carried out on the perceived number of livestock depredation and depredation rate between the Maasai and the Sonjo tribes. Chi-square tests determined the differences between the two ethnic groups on the following variables: year of livestock depredation, time (day/night) of depredation, where (boma/pasture) depredation occurred, season (dry/wet) of depredation, type of livestock that was depredated, number of livestock that were depredated, identity of the carnivore responsible for the depredation and herding equipment preferences. 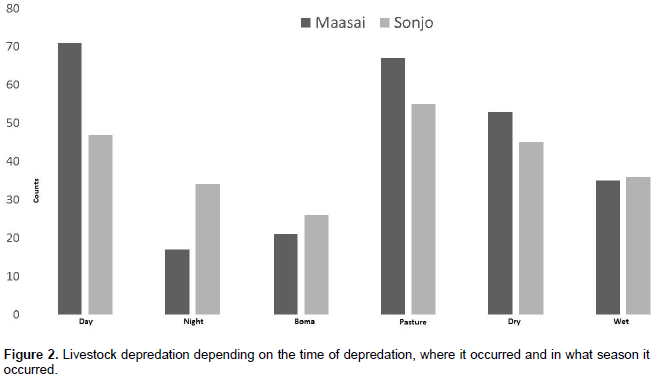 Carnivore species responsible
A significant difference was found in the frequency of attacks by different carnivore species (that is, lion, cheetah, leopard, spotted hyena, African wild dog, and jackal) between the two tribes (χ2 = 27.7, df = 5, p = 0.002; Table 1). In both ethnic groups, spotted hyena was the most common predator (Table 1). Lions and cheetahs were only found to cause livestock depredation in the Maasai land (Table 1), while leopards and jackals caused more livestock depredation in the Maasai tribe than the Sonjo tribe (Table 1). Similarly, livestock depredation by African wild dogs was higher in the Maasai tribe than the Sonjo tribe, though the difference was not statistically significant (χ2 = 0.8, df = 1, p = 0.38; Table 1).

Preferences of herding equipment
The study results revealed a difference in the preferences of herding equipment between Maasai and Sonjo herders (χ2 = 69.9, df = 5, p < 0.0001; Table 2). Only three herders did not use any weapon (Table 2). Maasai herders (n = 25) used more spears and/or knives and clubs (Table 2), whereas Sonjo herders (n = 33) preferred to use bows and poisoned arrows (Table 2). Both tribes rarely used domestic dogs, which would alert them to the incoming carnivores during the night or while in the pastures (Table 2). There was a statistically significant difference in the use of herding equipment and the livestock depredation frequencies (yes, no) (χ2 = 10.7, df = 4, p = 0.03; Table 2).

We would like to thank the Tanzania Wildlife Research Institute (TAWIRI) and the Wildlife Division (WD) for permission to conduct our fieldwork in the Loliondo Game Controlled Area (LGCA). We express our sincere thanks to the European Union's Horizon 2020 research and innovation programme, grant agreement No. 641918 for their financial support through the African BioServices project, without which support this study would not have been possible.