The studies on biodiversity of living organisms as well as the ecosystems which they are part of is essential for the assessment of species composition and setting priorities in conservation matters. The plant diversity assessment at Mount Kenya University Medicinal Botanical Garden was done over a period of three years using both individual observation and line intercept/point centered quadrant methods on five designated zones of the garden. A total of 248 plant species of 60 families were recorded. Most of the plants that were found in this garden were indigenous (90%) and in use categories; the occurring class was the medicinal (44%). Poaceae constituted the highest composition of 31 species (12.5%), followed by Asteraceae with 20 species (8%) and Euphorbiaceae with 15 species (6%). The rocky and exotic vegetation had high plant family diversity and the riverine had the least. It was concluded that the botanical garden was improving in its species composition and continued conservation and sustainable use will be important for the education and research services.

Biodiversity refers to the variety of life on earth, including plants, animals, and microorganisms, as well as the ecosystems which they are part of. It also includes the genetic differences within and between various species (Secretariat of the CBD, 2005). Globally, there are about 13 million species, but only about 1.75 million have been identified and the estimates show that 90% are animals, 80% plants, and 10% microorganisms (Otswongo, 2009). Biodiversity provides about 40% of the global market goods and services (Lusweti, 2011). World population exploitation in the recent past has posed great threats on biodiversity due to overuse, loss of habitat, and environmental pollution. The Millennium Development Goals number seven and the convention of biodiversity emphasize on the need for environmental sustainability and conservation for meeting life demands on earth (Secretariat of the CBD, 2005).

Medicinal plants form the backbone of traditional medicine practices that have existed since antiquity and have evolved through a number of civilizations. There are between 200,000 and 250,000 higher plants on earth and at least 35,000 species have been documented to be of medicinal use across various human cultures around the world (Bodeker et al., 1997; William, 2009). In Africa, there are between 50,000 and 70,000 plant species which besides being used in crude form have also been of great contribution to the development of drugs used in conventional medicine practices. Examples include morphine (Papaver somniferum), vincristine and vinblastine (Catharanthus roseus) and emetine (Cephaelis ipecacuanah) (Nigro et al., 2004). This implies that conservation of medicinal plants is essential for continued research of human and veterinary medicines as well as for other economic purposes.

Kenya is a country that lies within the tropical regions known to be rich in biodiversity (Lusweti, 2011). The country covers an area of about 582,900 km2 with over 35,000 of flora and fauna. Plant population is between 8000 and 9000 and about 2000 are shrubs and trees, while about 24,000 are animals and the rest are microorganisms (Mugabe et al., 1998). There are about 1,200 medicinal plants that have been identified for use in Kenya and 70% of Kenyan human population which is over 40 million, rely on traditional medicines for their primary health care needs (Odera, 1997).

Additionally, more than 90% of the population uses these medicinal plants at one time or another to prevent, cure or manage various health conditions. Like other spheres in the universe, the Kenyan population may pose threats to biodiversity and therefore affect the livelihoods of people, influence their lifestyle as well as climate change which may translate to fatal consequences. As a result, the Kenyan government has put measures that would lead to conservation of biodiversity by being a signatory to CBD. The constitution of Kenya, chapter five emphasizes on the need for environmental conservation and sustainability as a national commitment (National Council for Law, 2010) and too biodiversity is envisaged in the three pillars of economic, social, and cultural diversity in the effort of achieving vision 2030 for the country (Kenya Vision, 2030, 2007).

The purpose of this study was to identify the plant diversity at Mount Kenya University botanical garden, categorize the plants and determine the abundance of various plant families growing there. 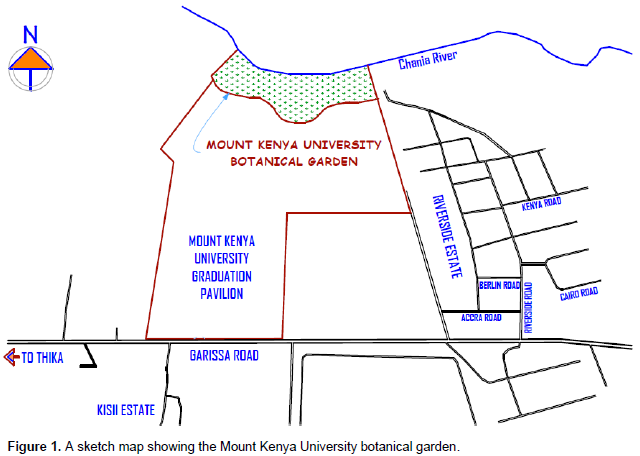 The site's altitude ranges from 4700 to 4,788 ft above the sea level with a gradual slope from the Northern to the Southern side. Although the vegetation zone in Kiambu county is largely characterised by highland climate. The outskirts of Thika sub-county, where the site is situated are notably a gradual transition into the grassland vegetation zone towards the South East of the country.

The botanical garden was subdivided into five designated sites consisting of rocky vegetation, soil dumping vegetation, heavily cultivated site, exotic plantation, and riverine vegetation. A general botanical inventory was carried out in 2012 during the dry season (January- March) and subsequent documentations were done during the wet season (August-September) with the aim of enriching the final species checklist. The data obtained was ecologically analyzed as per the subdivisions as indicated in Table 1.

Data was collected by random sampling using transect-quadrat method in all the three subdivided regions (rocky vegetation, soil dumping area and riparian vegetation). For a systematic study of vegetation, seven line transects were demarcated. They were all diverging from one geo-referenced point (S01Ëš 03’ 07.3“, E037Ëš 08‘20.1”) and run in different directions with the edges of the study site as the radii. Along each line transect, quadrants were demarcated each measuring 50 m × 50 m with an interval of 10 m. A total of 28 quadrants were demarcated as shown in Figure 2. Observations of the plant species that were found at every quadrat were counted and recorded at individual level (Erenso et al., 2014; Rao et al., 2014). A summary table and sketch map of the study area showing respective transects and quadrants in various habitats are shown in Table 1 and Figure 2, respectively. 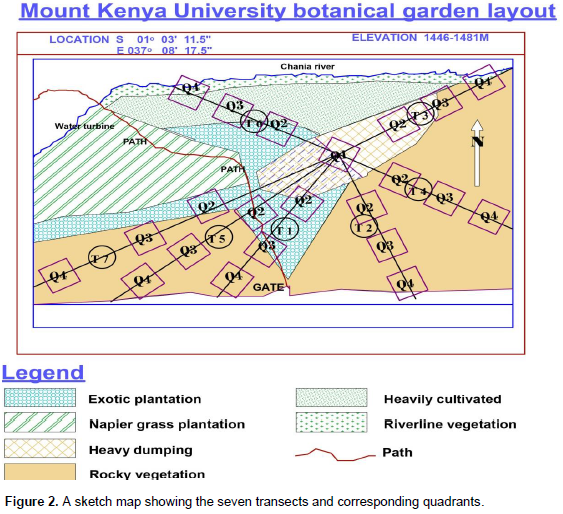 The data obtained was analyzed using both qualitative and quantitative statistical tools to reveal various measures of biodiversity including species richness, relative abundance, and species evenness. Shannon’s indices (H and J values) and Simpson’s indices (D values) were used for demonstrating species diversity and evenness. Formulae used were as:

Where f = number of families encountered, pi=fraction of entire habitat made of family i, ∑= sum of families; in this case, 60.

A total of 248 plant species from 60 families were recorded, 90% of which were indigenous and 10% exotic. Classification of the plants on the basis of use revealed that a majority of the plants in the garden are medicinal (44%), while other use categories were classified as weeds (29%), wood (9.7%), food (4.1%), life fence (3.4%), fibres (2.6%), ornamental (1.5%), perfumery, fodder, biogas (0.4%) and other unclassified uses (4.5%). The other plant uses like oils, fertilizers, dyes, and poisons were not represented in this study. The plants that were identified constitute 27 species of trees (11%), 77 species of shrubs (31%), 98 species of herbs (40%), 29 grasses (12%), 9 climbers (4%) and 5 lianas (2%). The vegetation of the study area was threatened with environmental degradation from removal of woodland resources, such as firewood, medicinal plants, and building material, as well as agricultural encroachment, damping, and overgrazing. In fact vegetation once described as woodland no longer exists in this ecological zone. The vegetation has been reduced to open woodland and grassland with a big area planted with Napier grass and exotic tree species. The common open woodland species include Dombeya garckeana, Ozoroa insignis, Euclea divinorum and Pappea capensis. The Acacia polyacantha, Combretum molle, Croton macrostachyus grassland are characterized by tall grass of Hyperrhenia filipendula, Themeda triadra, Aristida species, Digitaria species, Eragrostis species and Echinochloa haploclada. The herbaceous layer is characterized by exotic weed of Parthenium hysterophorus and Xanthium pungens. Other common species includes Aspilia mossambicencies, Ajuga remota, Bidens pilosa, Tagetes minuta and Phyllanthus species.

The riverine vegetation has been reduced to a mere strip of less than 50 m planted with Napier grass (Pennisetum purpueum) being the dominant species. The findings of this study records more than 50% of the tree species and woodland plants that were found in a study carried out in Thika (Malobe and Mutangah, 2005). It is important to note that some of the highly valued medicinal plants, namely, Aloe secundiflora, Zanthoxylum chalybeum, Prunus africana, Warbugia ugandensis, Maytenus senegalensis, Carissa spinarum, Withania somnifera, Kigelia africana Pavetta teitana, and Rhamnus staddo are found in this study area. Though, Combretum tanaense and Ficus scassellatii ssp thikaensis were recorded for the first time in this area.

Family distribution in the botanical garden

Poaceae constituted the highest composition of 31 species (12.5%), followed by Asteraceae with 20 species (8%), Euphorbiaceae with 15 species (6%) and the others as shown in Table 2.

The calculations of abundance of the families in the designated habitats of the garden using Simpson’ diversity index (D) revealed that the rocky area and exotic plantation site (D= 0.097) have more diverse families followed by the heavily cultivated area (D=0.011), heavy dumping site (D=0.13) and finally riverine with least diverse families (D=0.17). Further estimations of family abundance using Shannon diversity index (H) and evenness (J) confirmed that the rocky area was characterized by great family variations with equal abundance (H=3.93 and J= 0.96). Therefore, it can be said that there is a high chance of picking plant specimens belonging to the same family at the rocky area than at the riverine site (H=2.24 and J=0.55). Table 3 shows D, H, and J values of the habitats of the botanical garden as calculated using the Simpson, Shannon’s Diversity, and Shannon’s Evenness indices, respectively.

The entire region of the botanical garden that was studied had no recognizable vegetation cover at inception and after now is covered with a great percentage of grass followed by woody vegetation and therefore can be designated as grassland and open woodland vegetation. Continued efforts of protection and conservation may result to further transition of vegetation cover and change in species (flora and fauna) composition. The intention of having to reclaim this part of land and making it useful to the society is highly promising. The fact that the medicinal plant composition is higher than any other categories of uses reflects it well as an exhibition for life specimens in learning and research situations. The researchers recommend that it is important for the university and other interested organizations to continue considering enriching and protecting the area as all works well for the whole country.

The author wish to thank the Mount Kenya University Vice-Chancellor, Prof Stanley Waudo through whose Vice-Chancellor’s Grant this entire work was facilitated.