There is a lack of consensus among conservationists regarding the association between trophy hunting and wildlife poaching. Anti-hunting groups argue that trophy hunting is against animal welfare and contributes to wildlife population decline so it must be refuted. On the other hand, pro-hunting groups for advocate regulated hunting as an essential tool for supporting habitat protection and reducing crimes. Regulated hunting creates incentives for conservation through direct and indirect methods and reduces wildlife poaching in areas where ecotourism cannot be practically viable. We used fifteen years' trophy hunting and poaching of African elephant (Loxodonta africana), lion (Panthera leo), Cape buffalo (Syncerus caffer), Common Zebra (Equus quagga), hippopotamus (Common Hippotamus amphibious) and Greater kudu (Tragelaphus strepsiceros) from Selous and Rungwa game reserves in Tanzania. The results showed that there is no evidence of influence of regulated hunting on poaching rate for all species with exception of African elephant. Poaching rate of African elephant was found to be higher than the rate of regulated hunting because of limited number of quota set by Convention on International Trade in Endangered Species (CITES) and international restriction of elephant hunting imposed by the International Union for Conservation of Nature (IUCN). The study suggests that the contentions to stop trophy hunting because of an increase in poaching incidents have no empirical justification. Thus, more effort should be on anti-poaching activities ensuring the adherence to legal hunting regulations. 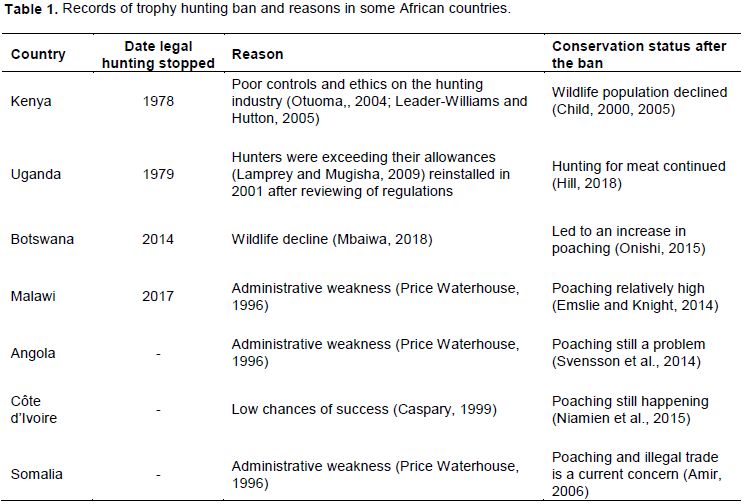 Study area
The study was conducted in the Selous and Rungwa Game reserves. These two reserves are among the most popular destinations for trophy hunting in Tanzania. They also account for the highest number of hunting blocks (URT 2013) with prominent records of poaching activities. However, the Tanzania Wildlife Management Authority (TAWA) plays a significant effort in curbing criminal activities, including poaching, a commonplace in the area. It is, therefore, for these reasons; this study was conducted in these areas. The Selous Game Reserve is in east-southern Tanzania at 9.0000° S, 37.5000° E, and covers about 50,000 km2 (Figure 1).  It is amongst the largest protected areas in Africa and is relatively undisturbed by humans. Selous harbors one of the most significant concentrations of elephant, cheetah, giraffe, hippopotamus, and crocodile, just to list a few. The reserve also has an exceptionally wide variety of habitats, including the Miombo woodlands, open grasslands, riverine forests, and swamps, making it a valuable laboratory for on-going ecological and biological processes. The Selous Game Reserve has appropriate legal protection, and a management plan has been developed. A small area (8%) of the reserve in the north (Kingupira) dedicated to photographic tourism, while most of the property is managed as a hunting reserve. Rungwa Game Reserve is in central Tanzania at 7.1987° S, 33.9750° E, and covers an area of 9,000 km2 (Figure 1). The reserve is composed of hills mixed with forest patches along the streams and the Mpera River valley, which provide water in the dry season (July to November). The reserve extends to Ruaha National Park, the second largest wildlife area in Tanzania after the Selous Game Reserve. The reserve consists of essential game species, including lions' leopards, Cape buffaloes, elands, sables, Greater kudus, Hartebeests, Liechtenstein's, Impala, Zebras, Hippopotami, Crocodiles, and Bush pigs. It is also among protected areas with the largest concentration of bird species feeding themselves in Usangu valley, one of the largest hunting areas.
Data collection
The study involved correlational design in which changes in the rate of illegal offtake corresponded to the changes in the rate of legal offtake. This study used secondary data obtained from the Wildlife Division under the Ministry of Natural Resources and Tourism. Wildlife Division - WD (now Tanzania Wildlife Management Authority - TAWA) is mandated to oversee wildlife utilization as well as combating poaching in game reserves and game-controlled areas in the country. We obtained record African elephant, African cape buffalo, Lion, Greater kudu, Hippopotamus and zebra hunted in Selous and Rungwa game reserves for the past fifteen years. Both hunting and poaching incidences are primarily reported to the base stations by the wildlife rangers who assume a leading role during trophy hunting and anti-poaching operations. The choice of the species to include in the study was based on the reason that they highly poached and at the same time legally hunted.
Data analysis
To examine the influence of regulated hunting on poaching of the studied species in the two reserves, we used a generalized linear model with Poisson model distribution error (GLMp). Hunting rates were taken as the number of animals killed by the two forms of offtake per year. The comparison of trends of animals killed in the two forms of offtake was made using the time Series R package. To test if there is a significant correlation between hunted and poached rates of each species a Spearman rank correlation correlation was used. All statistical analyses were performed by R 3.5.2 (R Core Team, 2019).

The rate of regulated legal hunting was found to be 14% higher than poaching incidences for the period between 2002 to 2016, with an average of 200 animals hunted in Rungwa and 400 animals hunted in Selous Game reserves. Further results shows that an average of 75 poaching incidences in both reserves (Figure 3). Results also indicated a gradual decline in number of hunted individuals for trophy for the study period, while poaching depicted no consistent pattern (Figure 1).  African elephant and Africa lion showed an exceptional pattern of regulated hunting and poaching. African elephant poaching incidences were higher than numbers taken through regulated hunting for the period under study (Figure 2).  The trend of hunted Lions was found to decrease with increasing time and were relatively higher than the reported poached lions (Figure 2). Selous have less numbers of animals taken through regulated hunting and less poached as that of wildlife offtake as compared to the Rungwa game reserve (Figure 4). Results from GLMp showed strong evidence that the number of animals killed varies significantly with the site (P < 0.001) as well as the type of offtake (either legally hunted or poached)(P < 0.001). A Few elephants were legally hunted, and there were fewer incidences of poaching of buffalo, greater kudu, hippopotamus lion, and zebra in Selous as compared to Rungwa (Table 2).

The perceived influence of regulated sport hunting and poaching seems not existing in Tanzania. This suggests that poaching should be dealt with separately from regulated hunting in wildlife conservation. Integrating legal markets with increased local control of wildlife and punitive law enforcement strategies may be the most effective and efficient means of reducing poaching rates of wildlife. At the same time, regulated trophy hunting must be emphasized in areas where photographic tourism cannot be practiced. Unlike Tanzania National parks which are financed by photographic tourism, game reserves will rarely sustain without trophy hunting because most of them cannot feasibly implement photographic tourism. There is a need for more studies regarding the cost-benefits and community approval of the two forms of wildlife utilization (ecotourism and trophy hunting) in Tanzania. Development of either hunting or ecotourism industry or instead combining the two in the country's conservation policy should be viewed as a temporary bridge based on the local acceptance. It is also essential to study when and where trophy hunting could be beneficial. Any decision to indulge in either wildlife viewing, or hunting should solely be based on science and social, economic studies. Although we could get a clear comparison between regulated hunting and poaching in the two study sites, the data on poaching gave less confidence in generalizing our results because they are being collected on haphazard basis We recommend future study that will employ use of the use of data collected from different places in different conservation ecosystems to get a broader scenario for generalization of the results.

The authors thank the College of African Wildlife Management, Mweka, for funding and all logistic support for this study. Furthermore, they appreciate the support from Tanzania Wildlife Management Authority for supplying the data, which makes this analysis a success. Three anonymous reviewers provided insightful comments which significantly improved the manuscript.