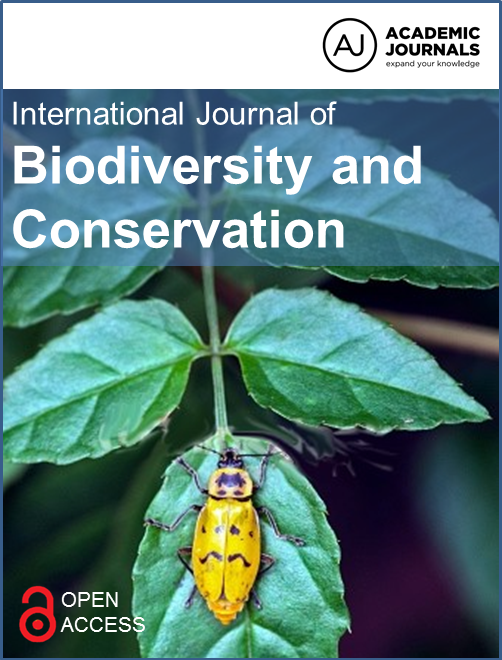 Low capture rates are a persistent problem in field studies of small rodents in Central Africa. This study aims to improve trapping efficacy by comparing the effectiveness of three types of bait placed in Sherman live traps: the traditionally used fresh manioc, palm nut and bait composed of peanut butter mixed with corn flakes. Trapping sites were located in the buffer zones of a total of five forest national parks in Gabon and Cameroon. Traps lines were placed in a variety of forest and savanna habitats and were alternately baited with the three different bait types. Statistical analyses were performed using the R software. A total of 212 individuals were trapped (during 3000 trap/night) from five species: Nannomys minutoides, Lemniscomys striatus, Hylomyscus alleni, Hylomyscus walterverheyeni and Praomys misonnei. Traps baited with peanut butter-corn flakes (PbCf) captured significantly more rodents (n=125, Trap success Ts=12.25%) than either manioc (n=31, Ts=3.23%; P <0.001) or palm nut (n=56, Ts=5.49%; P <0.001) for four of the five species. This finding was consistent across all sampled habitats and for both sexes. Taken together, these findings strongly indicate that baiting with PbCf is likely to enhance the effectiveness of studies of small rodent fauna in Central Africa.

Low capture success (< 5% capture per trap night) remains a major problem for small rodent field surveys in Central Africa (CA), particularly in forested habitats (Nicolas and Colyn, 2003; O’Brien et al., 2006). Manioc root (Manihot esculenta) and palm nuts (Elaeis guineensis) are commonly used as bait for live trapping (Duplantier et al., 1984; Duplantier, 1989; Nicolas and Colyn, 2003; Amundala et al., 2014; Katuala et al., 2005, 2008; Nicolas and Colyn, 2006; O'Brien et al., 2006; Nicolas and Colyn, 2007; Iyongo et al., 2012; 2013) but their efficiency is low, prompting researchers to look for more attractive types of bait.
Although peanut butter has been used in several previous rodent surveys across the region, its efficacy relative to other traditional bait types has not been systematically compared. Bâ et al. (2012) used peanut butter as bait with a relatively high trap success (Ts) of 12.8%. Similarly, Webala et al. (2006) obtained a TS of 7.25% using a mixture of peanut butter, ‘maize meal’, fried coconut and mashed ripe bananas, while Kok et al. (2013) obtained a Ts of 11.7% using a mix of oats and peanut butter. However, in another study by O'Brien et al. (2006), peanut butter mixed with oats yielded a relatively low trap success (Ts = 0.4%). The disparity between these results and the absence of a standardized experimental design for comparing bait types prompted us to explicitly test the efficiency of a mixture of peanut butter and corn flakes (PbCf) relative to manioc and palm nut in order to establish whether a more efficient sampling strategy could be used in future surveys. 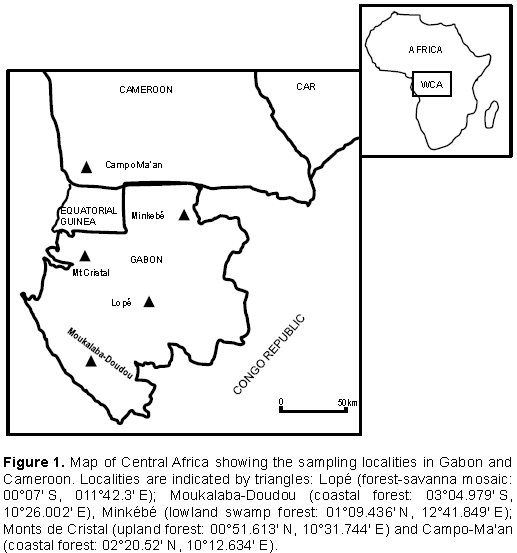 Small rodent sampling strategy
All rodent live trapping was carried out using Sherman live traps (7.5 x 9 x 23 cm). At each site, four trap lines of 250 m in length were laid out at a distance of at least 25 m apart. Each trap line was made up of 50 Sherman live traps (7.5 x 9 x 23 cm) placed at regular intervals of 5 m along the length of each transect (Gautun et al., 1986; Nicolas and Colyn, 2003; Fichet-Calvet et al., 2009; Nicolas et al., 2010a; Denys et al., 2014). Traps were baited in equal proportions with either manioc, palm nut or PbCf. Trapping was conducted for a maximum of five consecutive nights at each site.
Traps were checked two times per day in the early morning and late afternoon and fresh bait was applied when necessary. At each site, up to 30 captured individuals were euthanized by cervical dislocation, measured, weighed and sexed for species identification and tissue samples were stored in ethanol 96% until DNA extraction. Any additional specimens were identified and released at their point of capture. All animal handling and processing was carried out according to UNO IACUC protocol 12-008.
Species identification
In order to avoid misidentification of specimens within the morphologically similar species complexes within the genera Hylomyscus and Praomys, species were identified based on external morphology (Kingdon, 2003; Musser and Carleton, 2005; Happold, 2013); and sequencing mitochondrial genes 16S rRNA and cytochrome b gene sequences were employed to clarify identifications where external morphology was ambiguous (Nicolas and Colyn, 2003; Nicolas et al., 2010b; Mboumba et al., 2011).
Statistical analysis
Trap success (Ts) = [(Nm/NTN) ×100] was estimated at each site; where Nm is the total number of individuals and NTN is the number of trap-nights (Nicolas and Colyn, 2003; Kadjo et al., 2013). Ts was compared among bait types using a chi-squared test, and P-values for all pairwise comparisons were adjusted using the False Discovery Rate correction (FDR; Benjamini and Hochberg, 1995). The number of individuals trapped by bait type was also analyzed separately for each species using an exact multinomial test. Pairwise comparisons between bait types were performed using exact binomial tests with FDR-corrected P-values. Statistical analyses were performed using the R software (R Core Team, 2014). 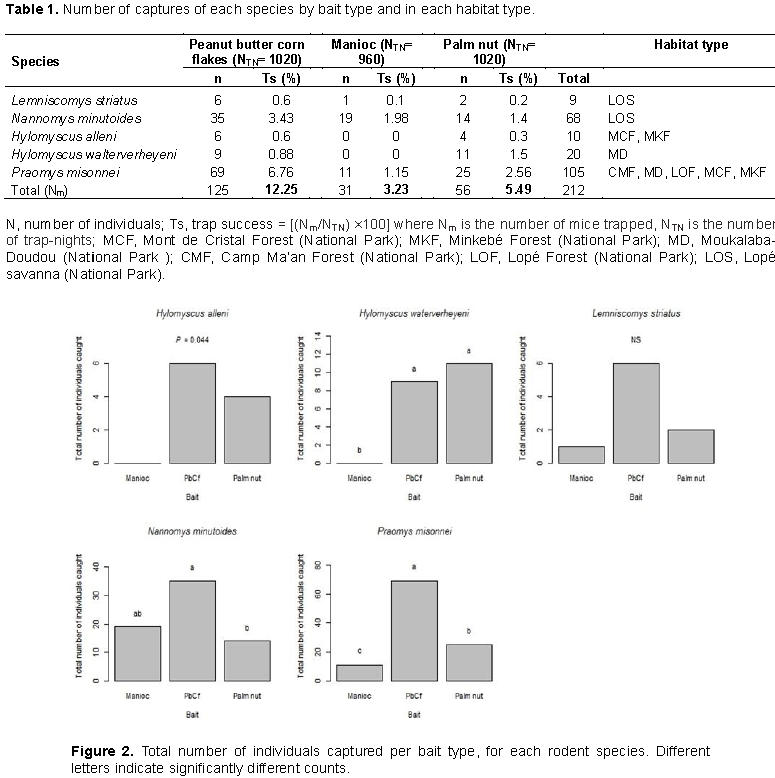 Overall, our results show that PbCf bait is generally more effective than either palm nut or manioc. The global trap success with PbCf was far higher than that of previous studies in Central Africa using Sherman traps baited with either manioc or palm nut (Nicolas and Colyn, 2003). In particular, the TS for rodents caught in Moukalaba-Doudou National Park using PbCf was far better than the 0.4% obtained at the same site by O'Brien et al. (2006). Both studies used the same trap type but in the case of O’Brien et al. (2006) were baited with peanut butter and oats instead of peanut butter and corn flakes, which could be one of the factors explaining these differences in Ts.
Palm nuts had been used routinely in field sampling studies in CA because they are a local native forest product, easily available and inexpensive. Similarly, manioc is also readily available locally and is regularly cultivated in fields in savannas and forest clearings. However, palm nuts are only effective when fresh and decay rapidly after being harvested, posing a serious problem for long-term field sampling missions away from villages. Also, their fruiting period is seasonal, limiting their availability at certain times of the year. In contrast, PbCf is available at all times of the year, is non-perishable and has been shown here to be extremely effective relative to both local bait types. We therefore recommend using PbCf bait routinely as bait in field sampling studies of small rodents in CA since the cost of purchasing these products will rapidly be outweighed by the greater capture success.

This study shows that PbCf is a more effective at capturing small rodents than other more traditional baits. Specifically, the number of individuals and species captured was greater using PbCf than either manioc or palm nut. We therefore recommend its use in studies of small mammal biodiversity in the central African tropics as it both saves time and improves capture success, thus overcoming two, major constraints in studies of small rodent populations.

The authors declare that they have no conflict of interests.

This study was funded by the National Science Foundation OISE 1243524 and the Université des Sciences et Techniques de Masuku. We would like to thank Elise Mayzerac of the Wildlife Conservation Society (WCS-Gabon) and the park manager (Benoît Nziengui) of Lopé National Park for their logistical support and advice. We would also like to thank the Centre National de la Recherche Scientifique (CENAREST) in Gabon for permission to conduct this study and the Agence National des Parcs Nationaux (ANPN) for permission to conduct research within the buffer zone of four national parks in Gabon. We would also like to thank the Ministère des Eaux et Forets (MINEF) and the Ministère de la Recherche Scientifique et Technique et de l’Innovation (MINRESI) for permission to conduct work in Cameroon. We thank Pierre Deleporte for helpful suggestions during the writing of this note.