In this work, the effect of different concentrations of NaCl on calli induced from two sugarcane cultivars NCo310 and CP59-73 was studied. Growth and ion concentrations (Na+, Cl-, K+ and Ca2+) of calli were determined after 1, 2 and 3 months of stress with the objective to understand the cellular mechanisms operating in salt stress tolerance and to determine the implication of inorganic fraction in salt tolerance in sugarcane cultivars. A negative effect of the NaCl concentration and the duration of stress exposure on the callus rate growth was observed in both cultivars and with more extent in CP59-73 cv. Results showed an increase in Na+ and Cl– and a decrease in K+ and Ca2+ concentrations after 1, 2 and 3 months of salt stress exposure. It also showed that resistant cv. NCo310 stressed calli accumulated less Na+ and retained more K+ and Ca2+ than CP59-73 calli. Cl- appeared to be involved in osmotic adjustment since the resistant cv. NCo310 stressed calli accumulated more Cl- than CP59-73 ones. These results suggested that the resistance to salinity in sugarcane is associated with a high K+, Ca2+ and Cl- concentrations and a low Na+ concentration within cells.

Salinity is a significant factor that affects crop production and agricultural sustainability worldwide, since about 10% of the land surface and  50%  of  all  irrigated  land  in the world are prone to salinity (Flowers et al., 2010). Salt stress affects several aspects of plant physiology by its osmotic and ionic components (Munns and Tester, 2008).
However, the operating mechanisms remains till now poorly understood and it not easy to differentiate between the effects due to the osmotic component and those due to the ionic one (Gandonou et al., 2011). Adaptation to salt stress involves several mechanisms that help plants to adjust osmotically, to maintain a low cytoplasmic concentration of toxic ions and a high concentration of essential minerals (Munns, 2005).
It is well known that cell culture techniques, including callus culture constitutes an important tool to investigate the response to salts, such as NaCl, of several plants at cellular level (Perez-Alfocea et al., 1994; Lutts et al., 1996; Ehsanpour and Fatahian, 2003; Gandonou et al., 2011) and therefore, to understand the cellular mechanisms involved in the salt tolerance and/or sensitivity (Tal, 1983; Gandonou et al., 2011). As for sugarcane, there were a few studies on the implication of inorganic solutes to osmotic adjustment and salt tolerance at the cell level. In a previous study, it was shown that ions toxicity was implied in salt effect at cellular level and that K+ ion plays a crucial role in sugarcane salt-tolerance (Gandonou et al., 2005a). In the present investigation, the effects of different NaCl concentrations (0, 50, 100 and 150 mM)  and the duration of stress exposure on callus growth and ion concentration in two sugarcane genotypes, CP59-73 and NCo310, at the cellular level were studied.

Plant material and culture conditions
Stalk segments of two sugarcane (Saccharum sp.) cultivars CP59-73 and NCo310 were surface sterilized with ethanol 70%  for 5 min and were sown in plastic pots  (20 cm/15 cm/10 cm) containing approximately 5 kg of soil under greenhouse conditions till reaching approximately 6 to 7 months. NCo310 is a salt-resistant cultivar and it is originated from South-Africa. While CP59-73 is originated from USA and it is largely cultivated in Morocco.
Calli were initiated from the youngest leaf segments as described by Gandonou et al. (2005a). The leaf segments were wiped with 70% (v/v) ethanol and sterilized with mercuric chloride HgCl2 0.03% (w/v) for 30 min and then rinsed 3 times with sterile distilled water. Explants were cultivated in Murashige and Skoog medium (Murashige and Skoog, 1962) supplemented with 2 mg/l 2,4 Dichlorophenoxyacetic acid, 30 g/l sucrose and 8 g l-1 agar, before autoclaving during 20 min at 120°C. Five explants were cultivated per Petri dish (10 cm diameter/ 25 ml of medium per Petri dish). Cultures were kept in darkness at 25±1°C in  a growth chamber. After 6 weeks of culture, calli were separated from the explant, individually weighted (from 100-200 mg) and then subcultivated in Petri dishes (5 calli per petri dish) on MS medium containing different concentrations of NaCl (0, 50, 100 and 150 mM).  Subcultures were made every month during three months for further proliferation in the absence or in the presence of NaCl under culture conditions described previously. After each month of stress, both control and stressed calli were harvested for growth and mineral analysis. 20 to 25 calli were used for each treatment (cv. ·stress factor · duration of stress exposure).
Growth determination
After initiation, calli were separated from the explants and were weighed and then inoculated onto MS medium supplemented with different concentrations of NaCl. After each month of the salt stress exposure, control and stressed calli were weighed for relative growth rate (RGR) determination. Callus RGR was determined according to the formula; RGR = [(final FW – initial FW)/initial FW].
Determination of ion concentration
The ions concentrations were determined using dry matter. Calli were rinsed for 5 min with cool distilled water to remove free ions from the apoplasm as recommended by Sacchi et al. (1995). Calli were then oven-dried at 80°C for 72 h and were grounded with a mortar. The ions Na+, K+ and Ca2+ were extracted after digestion with HNO3 acid according to Lutts et al. (1996) and the extract was filtered. Na+ and K+ concentrations were determined as described by Gandonou et al. (2005a) using a flame spectrophotometer (Model PHF 90D, France). Ca2+ concentration was determined by atomic absorption spectrophotometer (Model AA-6200, Shimadzu, Kyoto, Japan) as described by Errabii et al. (2007).  Chloride was extracted with hot distilled water (80°C for 2 h) as described by Gandonou et al. (2005a) and was determined spectrophotometrically at 470 nm as described by Guerrier and Patolia (1989) using ferric ammonium sulphate and mercuric thiocyanate.
Statistical analysis
The experiment was laid out as a Randomized Complete Design (RCD) with three factors and five replications. The three considered factors were cultivars (with two levels), NaCl concentrations (with four levels) and the duration of stress (with three levels). The experiments were repeated twice and gave similar trends. Each value is presented in the form of mean ± standard error with a reading of five independent samples per treatment. The analysis of the main effects of stress intensity, cultivars and the duration of stress was based on a three-ways analysis of variance (ANOVA). All statistical analyses were performed using SAS program (SAS Institute, 1992). 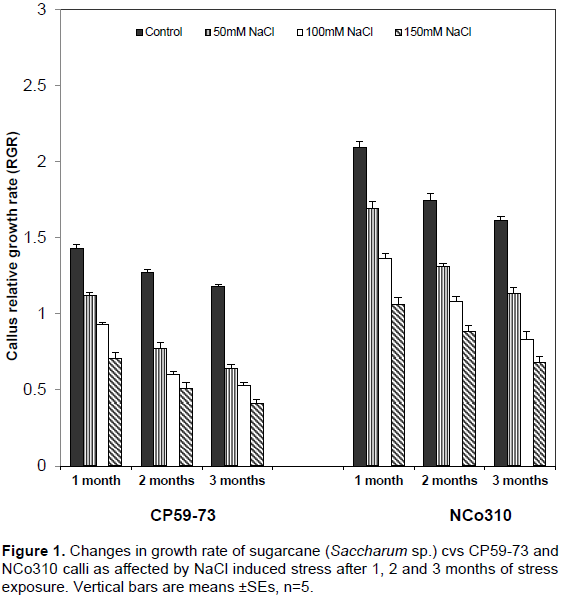 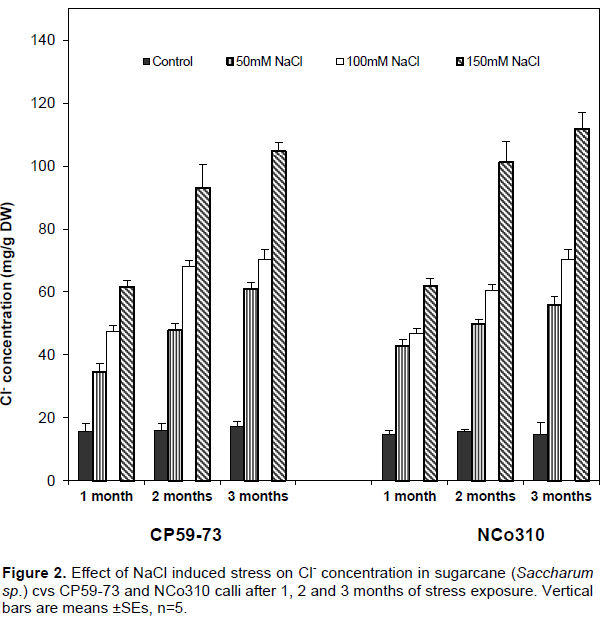 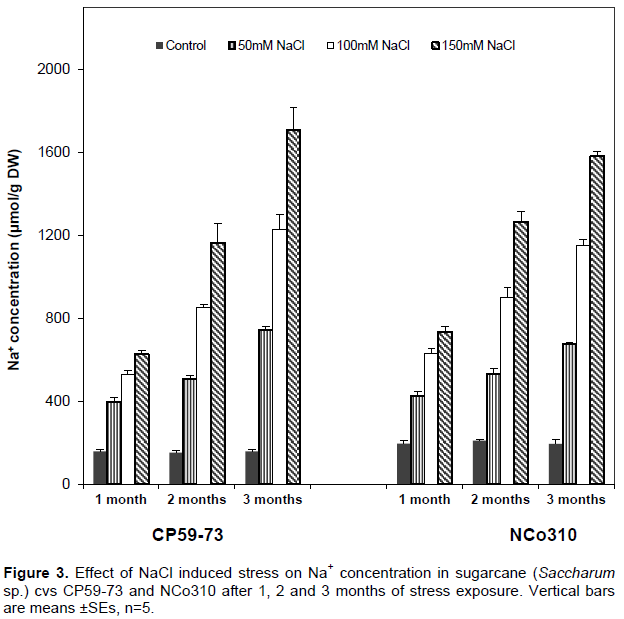 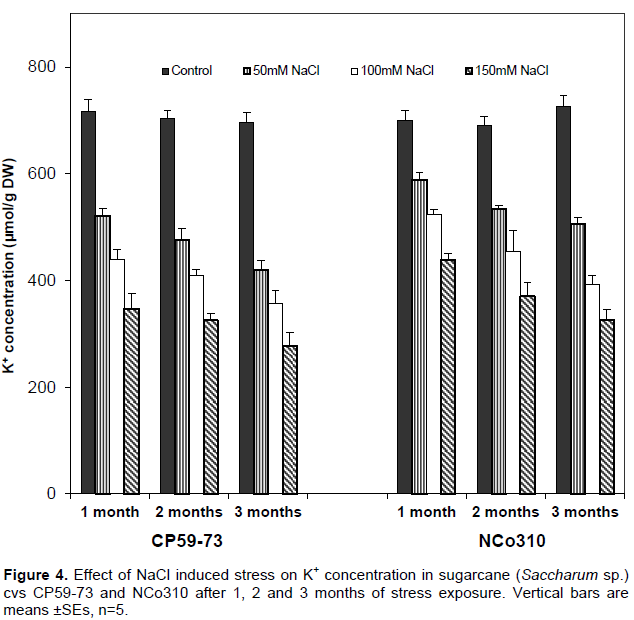 Consequently, K+/Na+ ratio (Table 2) decreased continuously with the NaCl concentration and the duration of stress exposure and this decrease was relatively more important in CP59-73 calli than in NCo310 ones. Ca2+ concentration followed almost the same pattern as K+ concentration and a very significant reduction in Ca2+ content in both cultivars stressed calli was observed (Figure 5). Ca2+ reduction was lesser in resistant cv. NCo310 calli than in the CP59-73 ones. In presence of 150 Mm of NaCl, Ca2+ concentration decreased over time
and reached to about 57, 62.8 and 67.2% of the control in CP59-73 calli and to about 37.1, 49.3 and 53% of the control in NCo310 ones, respectively after 1, 2 and 3 months of stress exposure. 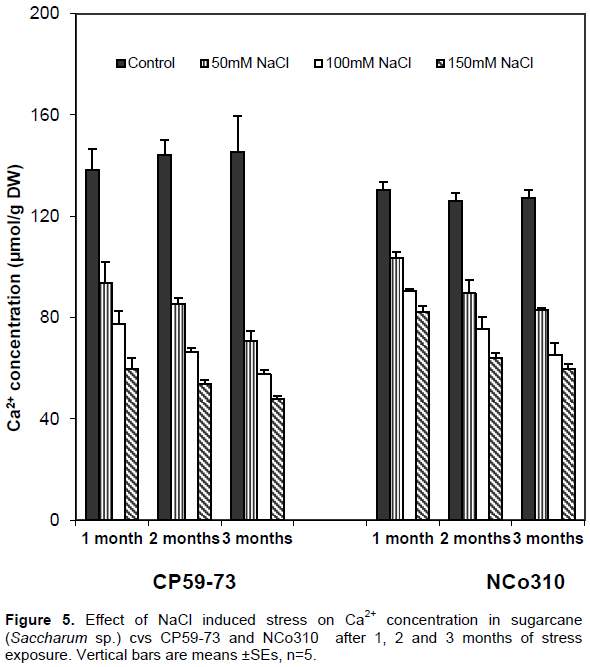