Biodegradation is the chemical breakdown of materials by a physiological environment. The term is often used in relation to ecology, waste management and environmental remediation. A specific gene from bacteria is identified and sequenced which has the capacity of oil degradation without any obvious strain specific discrimination using a combination of PCR and hybridization. The parameters of biodegradation that is culturing and PCR technique provide useful information for an assessment of the intrinsic biodegradation potential that is present at a site. PCR amplification products in the plasmid DNA of Pseudomonas aeruginosa was transformed into competent Escherichia coli cells. Thus the E. coli cells were conferred with oil degrading property and this was confirmed by growing them in Bushnell Hass medium along with petroleum oil. The E. coli cells were found to be catabolizing the oil. Results show that the capability for alkane degradation is a common trait in microbial communities. The method can be a very useful tool for the fast estimation of the biodegradation potential at polluted sites.

The use of enormous amounts of petroleum products contributes highly to environmental pollution. Spills of hydrocarbons occur from several causes, including blowouts, leakage from tanks, and dumping of waste petroleum products. The elevated loading of petroleum hydrocarbons in soil causes a significant decline in soil quality, and these soils have become unusable. Aliphatic alkanes are a group of hydrocarbons that are present in crude and refined oils. They were formed by reduction of organic material during the geochemical formation of oil. However, alkanes are also produced by plants and microorganisms and form part of the biomass (Bird and Lynch, 1974; Taylor and Calvin, 1987; Kunst and Samuels, 2003; Kloos et al., 2006).

Geogenic and biogenic alkane fractions differ in the complexity of the mixture and the mean chain length found (Hellmann, 1991). Introduced in greater amounts into the environment, for example by oil spills, aliphatic alkanes may become environmental pollutants. The bio-availability and toxicity of n-alkanes depends on their chain length (Gill and Ratledge, 1972). Only short chain n-alkanes are directly toxic, acting as solvents for cellular fats and membranes (Sikkema et al., 1995). However, long chain n-alkanes can contribute to the formation of oil films and slicks (Leahy and Colwell, 1990). These are hazardous to the macro- and micro flora of the contaminated site blocking the exchange of water, water soluble nutrients and gases.

A wide range of non-related bacteria and fungi can use n-alkanes as sole carbon and energy source (Rehm and Reiff, 1981; Watkinson and Morgan, 1990; van Beilen et al., 2003). Bacterial degradation of n-alkanes is possible under aerobic and anaerobic conditions (Widdel and Rabus, 2001).

However, activation of the otherwise chemically inert aliphates with molecular oxygen allows much faster degradation rates. Although various mechanisms of aerobic activation have been described (Rehm and Reiff, 1981; Maeng et al., 1997; van Beilen et al., 2003), only the terminal oxidation pathway that involves a key process of degradation has been investigated in greater detail so far.

Hybridization probes derived from various organisms have been used for the detection of microbial communities after isolation of the bacteria (Sotzsky et al., 1994; Whyte et al., 1995; Vomberg and Klinner, 2000). Investigations with PCR-based methods were also mostly performed with cultured isolates (Smits et al., 1999; Vomberg and Klinner, 2000; van Beilen et al., 2002). The high sequence divergence found in Pseudomonas Aeruginosa bacteria from different taxonomic groups (Smits et al., 1999; van Beilen et al., 2003) caused a group-specificity in the detection of alkane degraders with the PCR and hybridization methods described in the literature. The big genetic material of the P. aeruginosa support the idea of using this microbes in biotechnological applications

The diversity of P. aerginosa different strains and that each strain should be study as a single case were highlighted. Therefore, comprehensive analysis of environmental samples required the use of multiple primer and probe sets targeting the respective subgroups (Luz et al., 2004; Heiss-Blanquet et al., 2005; Kloos et al., 2006).

Here, an improved PCR based method is described that in combination with hybridization allowed a specific and sensitive detection of the unknown gene in environmental samples without obvious discrimination of any of the known bacterial groups possessing this gene.

For preparation of genomic DNA from pure cultures, cells were grown over night and harvested by centrifugation. Cells were resuspended in 320 μl 1×TE (10 mM Tris pH 7.5, 1 mM EDTA) and incubated for 1 h. After addition of 80 μl 10% SDS, samples were incubated at 65°C for 2 h. The final DNA extraction was done with the Mini Kit (Qiagen, Germany) starting with the addition of buffer AP2 according to the manufacturer's protocol. The collection site for soil sample was randomly selected followed by the procedure of DNA isolation using Genei Kit, Bangalore

Detection of oil degrading gene in the genomic DNA

PCR products were separated in 1.5% agarose gels. Gels were blotted on positively charged nylon membrane by capillary transfer with 0.4 M NaOH for hybridization. Hybridization was performed with the oligonucleotide. The oligonucleotide was labeled with DigddUTP using the 3′-end labeling kit (Genei, Bangalore, India) according to the manufacturer's protocol. Five hundred picomoles of oligonucleotide were used per 50 ml hybridization buffer containing 5×SSC (20×SSC: 3 M NaCl, 0.3 M Na3-citrate), 0.1% Na-lauroylsulfate, 0.02% Na-N-lauroylsarcosine, 0.5% blocking reagent. Hybridization was performed at 42°C over night and was followed by two washes with 2×SSC/0.1% SDS for 5min at room temperature, and two washes with 0.5×SSC/0.1% SDS at 42°C. The colour detection kit was used according to the manufacturer's instructions to detect hybrids (Kloos et al., 2006).

The amplified specific DNA fragments were cloned to competent E. coli using the Novagen Kit, Germany. Plasmids from transformants were prepared using the method of Birnboim and Doly (1979) and checked for the presence of an insert of the expected size. A fast initial screening of the transformants was performed by colony hybridization according to the method of Grunstein and Hogness (1975). Plasmids used for sequencing were further purified with the Plasmid Mini Kit (Qiagen, Germany). Both strands were read from double stranded plasmid with the opposing vector primers. Sequences were compared to Genbank with BLASTN (Altschul et al., 1997). Trees were calculated with NTSYS software (Dubey et al., 2002; Boyer, 2006; Walker, 2007).

Detection of oil degrading gene by PCR and hybridization

Specific detection of gene was achieved combining PCR amplification with oligonucleotide hybridization. To confirm the presence of DNA and to separate it from protein and RNA, agarose gel electrophoresis (AGE) was done (Figure 1). The PCR primers target essentially the same regions as the primers described by Smits et al. (1999). However, the reverse primer was shifted 6 bases, and both primers used here were more degenerate. The expected band of 500bp was amplified from DNA of the reference strains P. aeruginosa. Sequences of these PCR products differed only in the primer sequences from those published. Unspecific PCR products of various sizes were obtained with the nondegrading strains Bacillus subtilis and Escherichia coli strain. Hybridization with an oligonucleotide probe binding within the amplicon allowed to distinguish specific and non-specific products (Figure 2). Hybridization signals were obtained only for the expected products of the degraders. The detection limit of the combined PCR/hybridization assay was estimated with chromosomal DNA of the reference strains P. aeruginosa to be 0.1ng DNA. Assuming a mean bacterial genome size of 3.6 Mb (Fogel et al., 1999; Kloos et al., 2006) this detection limit corresponded to 2.6 X 104 gene copies. 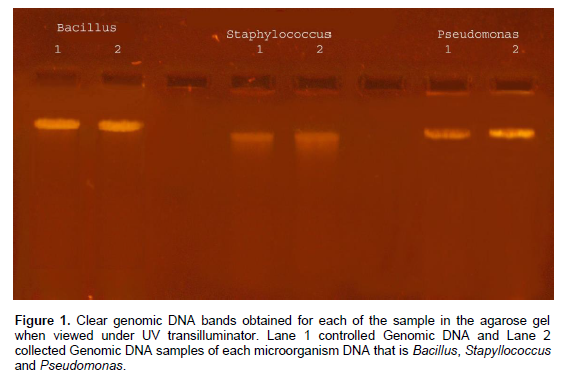 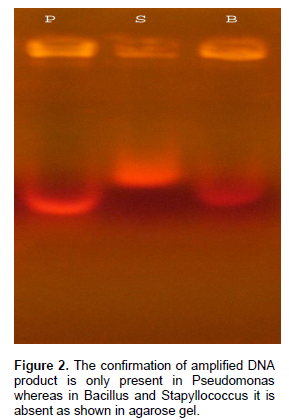 Evaluation of the detection method with the reference isolates

The PCR/hybridization method was used to screen soil isolates for the occurrence of alkB by colony-PCR. Isolates were obtained under non-selective conditions from a reference strains. Fifty randomly picked isolates were screened for each of the two independent samples. A single PCR product of the expected size was obtained for 8 and 10% of the isolates. None or unspecific products were observed for all other isolates. Again, only PCR products of the expected size hybridized with the internal probe (Figures 3 and 4). Sequencing of these PCR products after cloning confirmed their homology to alkB. Derived protein sequences showed highest homologies to AlkB from other bacterial gene (Smits et al., 1999; Khalameyzer et al., 1999; Andreoni et al., 2000; Kloos et al., 2006).

Transformationtion of oil degrading gene by PCR and hybridization 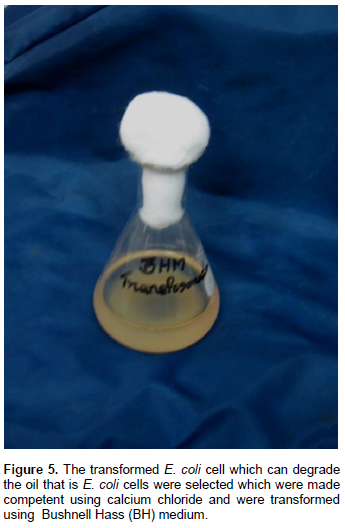 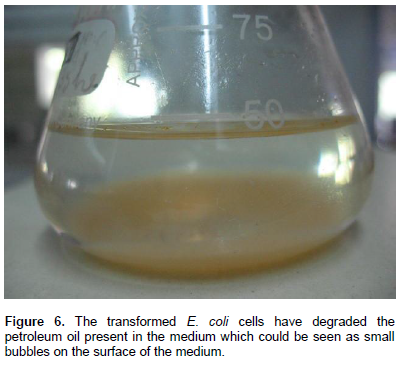 Biodegradation is the chemical breakdown of materials by a physiological environment. Oily wastewater, especially from oil field, has posed a great hazard for terrestrial and marine ecosystems. During biodegra-dation, crude oil is used as an organic carbon source by a microbial process, resulting in the breakdown of crude oil components to low molecular weight compounds. The focus of the research is identifying novel oil degrading gene in the cosmopolitan available Pseudomonas and also to evaluate the highly sophisticated PCR technique to detect the oil degrading gene in Pseudomonas species. Though the target of the work is to concentrate on Pseudomonas the other two strains are used as controls. It is observed after PCR amplification (Agarose gel) that Pseudomonas DNA contain oil degrading gene. Resulting into the plasmid DNA of Pseudomonas was transformed into competent E. coli cells. Thus the E. coli cells were conferred with oil degrading property and this was confirmed by growing them in Bushnell Hass medium along with petroleum oil. The E. coli cells were found to be catabolizing the oil. Molecular data were in accordance with physiological experiments for detection and enumeration of alkane degrading bacteria. Results show that the capability for alkane degradation is a common trait in soil microbial communities. Thus above results can be concluded that the PCR mediated detection and identification of oil degrading gene in Pseudomonas aeruginosa.

I thank our labouratory colleagues for their assistance with this project and valuable comments on this manuscript. I also thank Dr. Gowher Nabi for their continuous support in research. The work was supported by the university research funding.