Professional development is critical in the life of every organization in positioning workers to meet changing trends of globalization. This study seeks to look at a critical analysis of the challenges facing Continuing Professional Development (CPD) of academic staff of the colleges of education in Ghana. The exploratory, descriptive and evaluative case study approach that combined both qualitative and quantitative methods were used which basically adopted the questionnaire and the interview schedule in the collection of data. The census and the purposive sampling techniques were used in collecting data from 364 respondents constituting tutors, Human Resource Management and Development (HRMD) committee members and chairpersons, vice-principals and quality assurance officers. Primary data collected through the instruments used were analysed using the mean and standard deviation techniques. Text analyses were also done for the interview schedule data. The results of the study revealed that colleges of education do not maximise the full potential of benefits that accrue from CPD programmes due to some profound challenges such as lack of a systematic and comprehensive training needs analysis and weak interaction between the institution seeking the training and the institution providing the training. The study recommended that CPD programme be linked to the learning needs analysis and integration of knowledge with everyday practice. Management of colleges of education must endeavor to have an appraisal system linked to personal development planning of tutors.

The study used an exploratory, descriptive and evaluative case study approach that combined both qualitative and quantitative methods (Blaikie and Yin as cited in Agyenim-Boateng, 2008). The population of the study comprised all tutors and assistant tutors; committee members responsible for HRMD and their chair persons as well as vice-principals in the CoEs in the Eastern-Greater-Accra (EAGA) sector. Traditionally, the CoEs had been grouped into seven zones. The EAGA sector of that stratification comprised seven colleges representing 17.39% of the entire CoEs. To ensure representativeness, all the eight colleges found in the EAGA sector were used for the study. There were 371 respondents composed of 355 tutors for which 63 equally serve as HRMD committee members and chairpersons, 8 vice-principals and 8 quality assurance officers.
The tutors as well as the HRMD committee members did not require any sampling technique but the census approach was used in selecting all of them whereas the purposive non-probability sampling technique was used in selecting the HRMD chairpersons’, vice-principals and the quality assurance officers. There was however, a return rate of 364 representing 98.1% of the total respondents used for the study. Two instruments (questionnaire, interview schedule) were used in the data collection. The questionnaire was used for all the teaching staff as well as the quality assurance officers. The questionnaires were personally distributed in all the 7 colleges with six trained tutors who served as ambassadors in the various colleges. A structured interview schedule was used for the HRMD committee chairpersons to elicit information basically on varying issues that bother on the study that actually   emanated   from   the  questionnaire  that  needed  further  clarifications as well as documentary evidence of CPD situation in their respective colleges. The interview was personally conducted by the researcher. The study used the mean, standard deviations as well as percentages in analyzing both research questions.

Criteria used by CoEs in selecting staff for training
Results on criteria considered by CoEs in CPD development programmes were assessed and the results shown in Table 1.
In sharp contrast to what literature stipulates in relation to the selection of staff for CPD activities, the results from Table 1 deviates from the established norms and standards. For instance, it could be seen clearly from the mean as arranged in a hierarchical order in Table 1 that the criterion that had mostly informed and influenced CPD activities in the colleges was national/organizational policy. The Colleges of Education Act, 2012 (Act 847) stipulates through the statutes that the minimum qualification requirement for teaching was a master’s degree. It was therefore incumbent on teaching staff to up-grade their respective qualifications to meet the new organizational requirement. In as much as this was a national policy and an organizational requirement, it should have been executed taking into cognizance the factors that necessitated the change in policy. Thus, this policy was executed blindly without any form of formal assessment by management to ascertain how employees were progressing and the sort of improvements necessary to build on their strength and enable them to perform more effectively. This contradicts what literature says that training needs must precede any form of training and development program (Noe, 1999 as cited in Owusu, 2011).
This revelation corroborates literature that the performance appraisal system of the Ghanaian public sector universities did not affect the HRD programmes of the university as they were not fully integrated into the HRD programmes of the university (Agyenim-Boateng, 2008). Compounding the problem of lack of training needs analysis through either a formal or informal appraisal system was the non-existence of an HRMD unit which should have in it a quality assurance component. The study revealed that all the eight colleges used for the study had constituted a Staff Development Committee which was a statutory requirement but only existed in name as it was not functioning. Likewise, quality assurance was left to the whims and caprices of just one individual who virtually had no role to play in staff CPD.
Table 1 further shows that respondents considered ‘career progression’, ‘personal development plan’ and ‘interest’ as the most prominent media through which they were able to determine whether or not CPD was necessary. Owusu (2011) stipulates that career progression’, ‘personal development plan’ and ‘interest’ cannot override indicators like client’s responses and feedback’ and ‘knowledge/skill gap’ which look at training needs of the organization, training needs of the trainee involved as well as career progression. Performance appraisal of teachers in the CoEs should encapsulate responses and feedback from trainee teachers on mentee programs. This is to help improve individual employees’ performance in the organization in an attempt to improve the overall organizational performance and effectiveness.
The on-going analysis from Table 1 seemed to stipulate that the CoEs did not really have any stipulated criteria through which they were able to identify their training needs for CPD programmes. The situation gives rise to the use of discretionary measures from teachers accessing  the  program  and  the  danger   here   is   that training programs may not necessarily meet the organizational needs. Thus, most CPD programs had unfolded in the CoEs without regard to pertinent indicators that will yield the required outcome and expectations. This finding confirms the NAB analysis as cited in Newman (2013) that only 0.01% of the teachers with Masters Degrees in CoEs had qualifications in the relevant subject area. This further corroborates a study by Agnaia as cited in Sharon (2017) that administrative functions were practiced without regard to acceptable standards and established procedures.
Challenges facing CPD practices
Like every other human activities, there is no doubt that the practice of CPD in the CoEs in Ghana were associated with some challenges. The study basically explored how the respondents perceived challenges faced by the Colleges of Education Service in Ghana. Table 2 shows a summary statistic of the responses from the study. 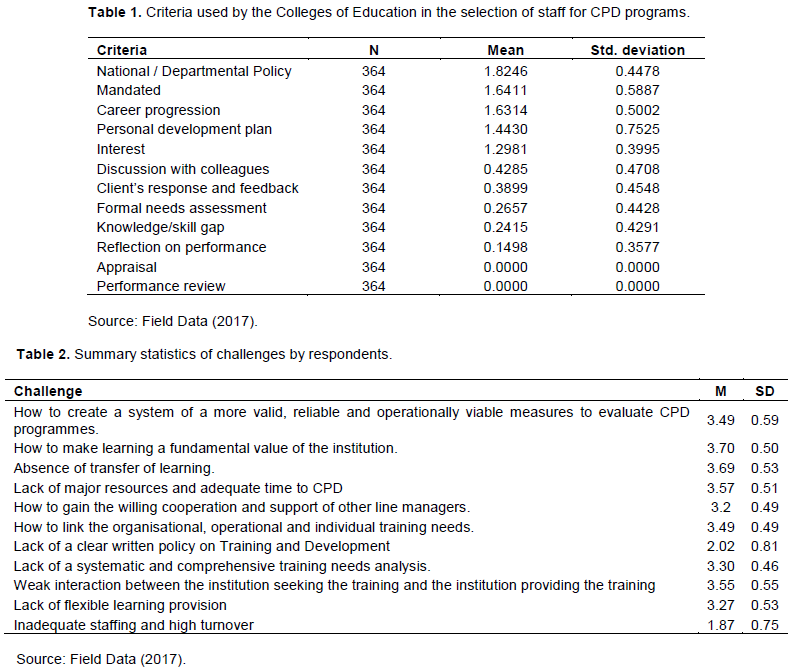 (1) Colleges of Education did not maximise the full potential of benefits that accrue from CPD programmes due to the absence of collaboration between the CoEs and the institutions providing the training.
(2) CPD programs in the CoEs were mostly dominated and influenced by discretionary measures from both authorities and beneficiaries due to the lack of a clear written HRD policy. Indeed, there is no direction as to what, how, and when? CPD activities must be organized.
(3) The culture of learning and for that matter making learning a fundamental value in the CoEs was absent due to a number of institutional bottlenecks in policies as well as unwillingness on the part of staff due to lack of incentives and other motivational factors.
(4) There is no effective evaluation of CPD programmes due to lack of a valid, reliable and operationally viable measures to evaluate CPD programmes.

To improve, refine and equally ensure CPD programmes are maximally effective, this article prescribes some strategies that could be adopted by the CoEs in addressing some identified challenges that militate against successful CPD policy implementation practices.
(1) To ensure active modes of learning, CPD programmes must be linked with learning needs analysis and integration of knowledge with everyday practice.
(2) CoEs must take into consideration that their institutions commitment to CPD should be demonstrated not only in quantitative terms, but also more importantly in its quality. In this context, the study recommends that, Tannenbaum (1997) assertion should serve as a blueprint in the evolution of institutions CPD programmes and human resource development in general. Tannenbaum (1997) states that: “Rather than the amount of training, it is the quality and appropriateness of the training, the supportiveness of the work environment, and the use of appropriate training policies and practices that determine how well training contributes to continuous learning” (p. 447).
(3) In order to streamline the selection process and ensure a better succession plan for CoEs, selection criteria must be tied strictly to assessment needs as well as organisational principles and standards.
(4) CoEs must ensure that pragmatic measures are taken for the provision of modern equipments, tools and other requisite facilities necessary for the technological advancement that comes with CPD. This invariably would facilitate proper transfer of learning.
(5) Workers must endeavor to build a CPD portfolio. This can be paper-based, electronic or online and it would be helpful for it to be based on a common template and include annual progress summaries.

The authors have no conflict of interests.