Location of the study area
The study was carried out in Tharaka-Nithi County representing the forty-seven   counties   in   Kenya.  The  county  has  two  distinctive zones; a highland zone with many, highly-populated public secondary schools, and semi-arid lower zones with few poorly-populated schools. The zonal diversity influenced the number of school and respondents who participated in the study.
Research design
Mixed methods research approach was used in the study, in order to provide an in-depth and broad perspective on structural readjustment challenges facing the implementation of inclusive education policy in secondary schools in Kenya (Creswell et al., 2011). The advantage of using mixed methods research approach is that the researcher links the essentials of qualitative and quantitative approaches by drawing from the strong points of each method. A mixed-methods research enabled the researcher to gain a wider perspective and profound understanding of structural readjustment challenges facing inclusive education implementation. Within a mixed method research approach, the study specifically employed the convergent parallel technique, which involved collection and analyses of both quantitative and qualitative data separately in the same time-frame, analyzes the two components independently, and the results from the two data sets are merged for an overall interpretation. The aim of the convergent parallel technique was to develop a more understanding of structural modification challenges by comparing and contrasting various results from the same sources (Creswell et al., 2011).
Target population and sample size
Principals, teachers and secondary school students in Tharaka-Nithi County constituted the target population for this study. The sample population was obtained from all extra-county and county secondary schools who enrolled learners with disabilities (LWD), non-disabled learners, studying in the same classes with LWD and class teachers teaching learners living with disabilities. Aggregated data for learners living with disabilities presently or previously enrolled in public secondary schools were absent at the Education Offices in Tharaka-Nithi County, hence the researcher made calls to 56 secondary school principals of all the extra-county and county schools to find out whether they had enrolled learners with disabilities. Sixteen out of 56 schools had enrolled learners with physical challenges. The researcher targeted extra-county and county schools because they are well-resourced financially, physically and in human resources. Hence, the researcher felt that the schools were well endowed with physical and human resources necessary for the implementation of inclusive education policy without challenges. Learners with disabilities in sampled schools were purposively included for the interviews. Non-disabled students learning in the same classes were randomly selected to participate in focus group discussions
Research instruments
The research instruments for data collection in this study were semi-structured questionnaires for all the teachers, interview schedule for learners living with disabilities and focus group discussions for non-disabled learners. The questionnaire for teachers was developed to provide the quantitative data.  The questionnaires had both closed ended and open-ended items. Closed ended items facilitated straightforward scoring of data and data analysis. Open-ended items gave teachers an opportunity to give their opinion and provide an in-depth information on structural modification    challenges facing implementation of inclusive education policy. The interviews for learners with disabilities were intended to give them chances to express their experiences in schools and focus group discussions for non-disabled learners studying in the same classes with LWD.
Data collection procedure
The researcher acquired ethical approval certificate from the Ethical Review Committee (Pwani University) and a research permit from the National Council of Science, Technology and Innovation (NACOSTI) before administration of the research instruments. This was because the study involved interviewing of the learners with physical disabilities. The researcher made courtesy calls to the Education Officers to be authorized to conduct research in schools in Tharaka-Nithi County. Sixteen (16) extra-county and county secondary schools were visited by the researcher. Detailed letters explaining the information on the research to be conducted were sent to principals of the selected schools. The researcher conducted the interviews with the learners with physical challenges, which was done on one-to-one basis. A total of 11 learners with physical challenges were interviewed; it took a duration of 10-15 min. The researcher also conducted 5 focus group discussions each with the 10 non-disabled learners, which lasted for 20-35 min. The focus group discussions were audio-taped so that the researchers could listen carefully to the responses later after the interview. Besides, using a tape recorder was considered significant to enable the researcher to concentrate on the participants’ responses rather than taking notes.
Data analysis
Quantitative analysis was based on numerical dimensions of a specific aspect of the population. In the data analysis process, the raw data gathered from the questionnaires were keyed into SPSS version 20 in order to make inferences about the population using the information provided by the sample. Quantitative data were analyzed using descriptive statistics, that is, frequencies and percentages. Qualitative analyses involve obtaining comprehensive information about phenomenon being studied and establishing patterns and trends from the data collected (Creswell, 2014; Viswambharan and Priya, 2016). The researcher transcribed all interviews and organized them into meaningful categories, then grouped them into related codes. The coded information was organized into themes and presented in a narrative form. The data facilitated making conclusion and recommendations, including recommendations for further research.

Instrument return rate
A total of 100 out of 120 teachers, constituting 83.3% response rate, completed and returned the questionnaires. On the other hand, 11 out of 13 learners with physical challenges were interviewed, which was 84.6% response rate. Similarly, 5 focus group discussions, each with 10 non-disabled students participated in the study as indicated in Table 1. The return rate of 75% and above was considered sufficient to provide information about a given population. Best and Kahn (2006) suggest that a 50% response rate is adequate, while 60 and 70% are good and very good respectively. The researcher made follow up telephone calls with the school principals to establish whether the questionnaires were ready for collection. Best and Kahn (2006) support the use of vigorous follow-up measures to increase the questionnaire return rate.
The research findings are presented according to the research questions summarized as follows:
1) Number of students with physical disabilities who have been in schools,
2) Structural readjustment challenges affecting the implementation of inclusive education policy,
3) Suggestions on how the schools can minimize structural readjustment challenges.
Number of learners currently/previously admitted in school
The first objective was to identify the number of students living with physical disabilities currently and/or previously enrolled in schools. Data from the 100 questionnaires filled by teachers teaching learners with disabilities revealed that there were 11 learners with physical disabilities currently enrolled while 30 students with physical disabilities were previously enrolled in County and Extra-county secondary schools. Table 2  presents the number of learners currently or previously admitted in schools. The distribution of learners currently enrolled was six (6) in two extra-county schools and 5 in two County secondary schools. The distribution of LWD previously enrolled was seventeen (17) in four (4) extra-county schools while 13 were in 9 County schools. 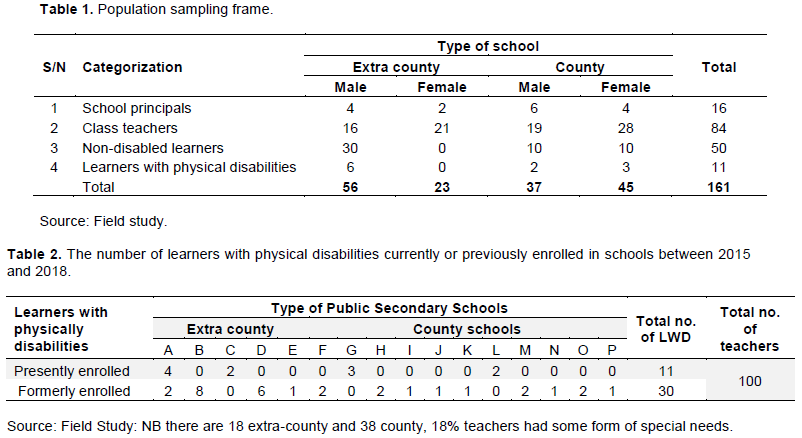