Sardinella aurita is the main species exploited by small-scale fisheries in Senegal and represents an important source of low cost protein in the Senegalese market. The objective of this study was to determine the age, growth and mortality parameters of S. aurita obtained from the Senegalese coastal waters. Age, growth parameters and mortality rates of this species were estimated using FiSAT II (FAO–ICLARM Stock Assessment Tools) software. A total of 5104 specimens of S. aurita were collected monthly between March 2012 and February 2013 from commercial landings in three sites of Senegalese coasts (Joal, Mbour and Kayar). Mean growth parameters for the entire period were estimated as L∞= 32.82 cm, K= 1.10 year-1 and t0 = -0.14 year. Instantaneous total mortality (Z = 2.77 year-1) coefficients per year were estimated using catch curves and methods based on the mean length of the fish caught. Natural mortality (M = 1.49 year-1) was estimated using the Pauly’s empirical equation and fishing mortality (F = 1.28 year-1) by the difference between total and natural mortality values. The exploitation rate (E) of 0.46 indicated no over-ï¬shing on this species.

Senegal has one of the most productive fishery resources along the West African coast. The EEZ is famous being among the full of fish zones in West Africa.

Clupeiform fishes are important because of their high biomass and their role in marine ecosystems. Sardinella aurita (Valenciennes, 1810) was selected for the present study. It is a small pelagic fish that lives in tropical and subtropical  waters of  the  western  and  eastern  Atlantic Ocean, the Pacific Ocean, the Mediterranean and, occasionally, the Black Sea (Sabate et al., 2006). According to the Department of Maritime Fisheries the round sardinella, S. aurita dominates the fish captures with nearly 38% of the unloading in 2011. The round sardinella is a mid-sized pelagic fish that represents one of the most important commercial fishery resources in the Senegalese coasts.

This species is of paramount economic interest in the national economy. The exploitation of this stock generates employment, incomes, foreign currencies, and contributes to the population’s food safety. The round sardinella is a marine pelagic fish that is widely distributed throughout the tropical and subtropical seas of the world, including the entire Mediterranean and the Black Sea (Froese and Pauly, 2003). It is a key species inhabiting the ecosystem of the northwest African upwelling region (Bard and Koranteg, 1995). It is intensively exploited and crucial to the economies of the West African countries. Indeed, this fish is the primary species fished in Senegal, and the second in Mauritania, with total landings exceeding 500,000 tons per year (Corten et al., 2012; FAO, 2013). According to Fréon (1998), the Senegalese-Mauritanian stock which extends from Mauritania (26°N) to Guinea (10°N) is most important in West Africa. In Senegal, very few data exist on its biology in general and its growth in particular. Indeed, data related to the growth parameters of S. aurita in Senegal were obtained by Boely et al. (1982), Boely (1983), Camarena-Luhrs (1986) and Fréon (1998). The methods used to determine  the  growth  were  subjective (method of Petersen) or unsuited to the tropical medium. Thus, it seemed important to bring up to date the principal growth parameters of this species with the aim of improving comprehension of their biological cycles, and of contributing to the evaluation of stocks and their management.

Moreover, scientific studies on sardinella in the North East Atlantic are considered insufficient and a lack of biological monitoring for several years has been reported (CSRP, 2012). Therefore, it appears difficult to make a good stock assessment to estimate the recruitment and identify different segments of the exploited stock. All these lacks make it necessary to conduct additional research.

The present study aims to determine age, growth and mortality parameters of S. aurita obtained from the Senegalese coastal waters.

The study was carried out in Senegalese coasts. Fishes were collected from commercial landings in three sites of Senegalese coasts: Joal (14.10°N; 16.51°W); Mbour (14.24°N; 16.58°W) and Kayar (14.55°N; 17.07°W) (Figure 1). The hydrology of the Senegalese coast is characterized by seasonal upwelling. This phenomenon supports the phytoplankton development, which forms the base of the food chain. 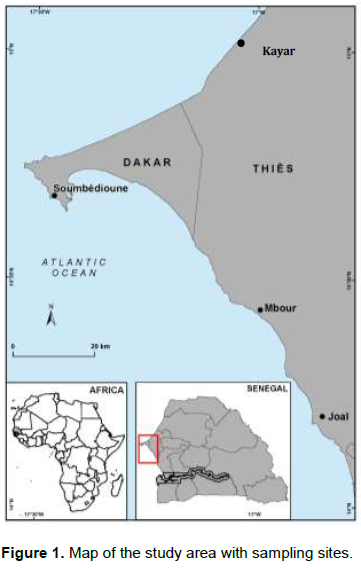 For each sampled fish, the total weight (TW) was recorded to the nearest 0.1 g and the fork length (LF) was measured to the nearest cm. The length data were analyzed to study the age and the growth. The monthly length frequencies were grouped into classes of 1 cm interval and were laid out sequentially over one year to estimate the growth.

The routine incorporated in the FISAT II software (Gayanilo et al., 1994), assumes that a seasonally oscillating version of the von Bertalanffy equation is used to describe the growth in length of the fish studied; specifically, it uses Somers’ (1988) modification of the seasonal growth model of Pauly and Gaschiitz (1979):

Where, L, is the length at age t, L∞, the mean length of the fish would reach if they were to grow indefinitely, K is the von Bertalanffy  curvature  parameter,  to  the  theoretical  age  at which length is zero, where St = (CK/2π)sin2π(t-ts), St0 = (CK/2π)sin2π(t0-ts), and C and ts describe the amplitude and timing, respectively, of the seasonal growth oscillations. This equation reduces to the standard von Bertalanffy model, Lt = L∞ [1-e-k(t-t0)], when C=0. C can take values generally ranging from zero (in tropical fishes) to unity (in temperate fishes) (Gaschütz et al., 1980). The seasonal parameters (C) and (WP) were used for a better adjustment of the growth curves. C indicated the amplitude of oscillations of the growth speed and (WP) the year time during which the growth is minimal.

The growth curves index of adjustment (Rn) identifies the growth curve which was adjusted best with the whole size frequencies data. Rn varied between 0 and 1 and its maximum value corresponds to the best combination between L∞ and K.

ELEFAN estimates only two of the three growth parameters (L∞ and K). The   theoretical  age  at  birth (t0)  was calculated using the empirical formula:

The theoretical age at birth (t0) was calculated using the empirical formula:

The growth index performance (É¸') of S. aurita was calculated from the equation:

The annual instantaneous rate of mortality (Z) was estimated by the average of length-converted catch curve method as implemented in FiSAT II (Pauly and Munro, 1984). Natural mortality rate (M) was estimated using Pauly’s empirical relationship, with a mean surface temperature (T) of 25.5°C:

Where, M is the instantaneous natural mortality, L∞ is the asymptotic length, T is the mean surface temperature and K refers to the growth rate coefficient of the von Bertalanffy growth function.

The fishing mortality (F) was calculated as F =Z – M in order to estimate the exploitation rate (E) by the equation E =F/Z.

The average values of von Bertallanfy growth function plot and length frequency estimated the asymptotic length (L∞) value at 32.82 cm and the growth constant (K) at 1.10 year-1 (Figure 2). The t0 value calculated using Pauly’s formula was -0.14 year. The alignment of points on the straight line was quite satisfactory with a higher coefficient of correlation (0.99). Using the growth parameters (L∞, K and t0), the von Bertalanffy growth function for length at time (t) was expressed as (Figure 3): 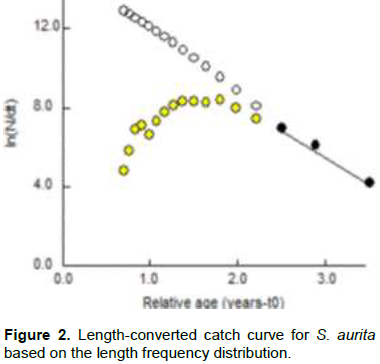 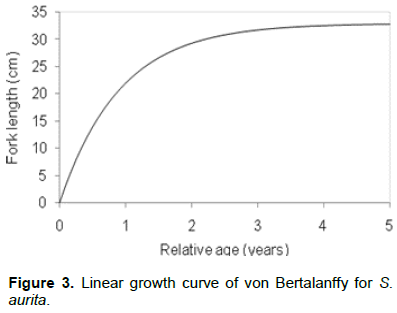 Figure 4 shows the restructured length frequency with superimposed growth curves with bimodal population structure, indicating probably the existence of four cohorts within the population. On these graphs, the number of lines represents the cohorts.

The round sardinella growth was very fast at the first year, it reached 22 cm. At the second year the growth slowed down and at the end of the third year it reached its maximum size 31 cm with a longevity, which exceeded 5 years (Figure 5). 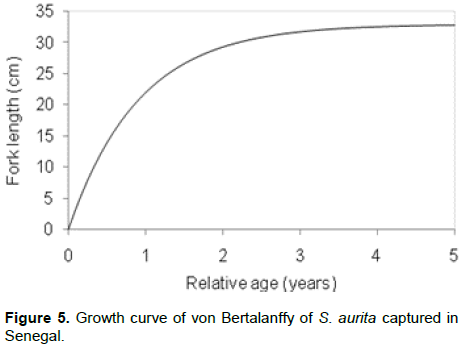 The growth performance index value (É¸') was estimated at 3.01 for S. aurita in Senegalese waters.

The calculated mortalities from FiSAT II output of the length converted catch curve are shown Figure 2.The total mortality coefficient (Z) of round sardinella was relatively high estimated as 2.77 year-1 based on the average of length-converted catch curve method (Figure 2). The natural mortality (M) was calculated as 1.49 year-1 by using Pauly’s method. Then, the fishing mortality (F) was obtained as 1.28 year-1. The exploitation rate (E) was found to be 0.46.

The length frequency analysis (LFA) was used in the present study to estimate age and growth of S. aurita. In the present investigation, the growth constant (K) was estimated at 1.10 year-1, the asymptotic length (L∞) as 32.82 cm (FL) and t0 value was -0.14 year. The LFA showed that species might live for 5 years of life, whereas the age below two years dominated the catches. The data presented here confirmed that S. aurita is a fast-growing species (K = 1.1; É¸' =3.07). 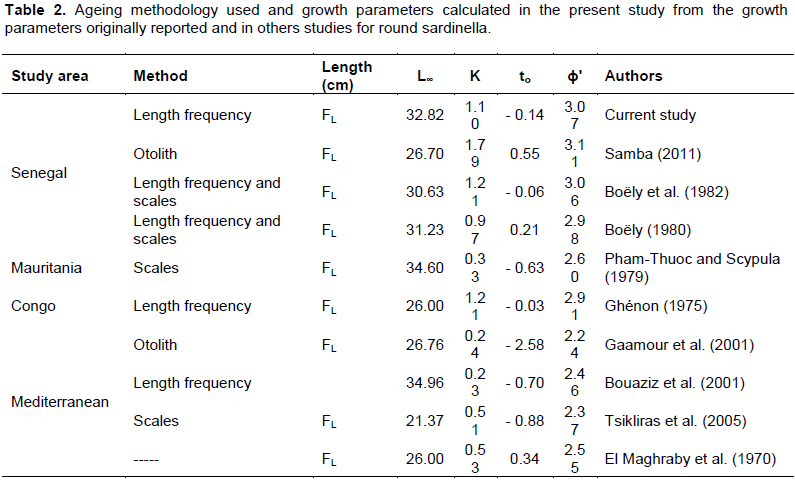 The index of growth performance (É¸') is considered as a useful tool for comparing the growth curves of different populations of the same species and/or of different species belonging to the same family. In this study, the value of growth performance index was É¸'=3.01. This growth index was largest than those obtained by Gaamour et al. (2001) in the Tunisian coast (É¸' =2.27), by Salem et al. (2010) in the Mediterranean coast (É¸'=2.27) and by Chesheva (1998) in the Mauritanian coast (É¸'=2.66).The mean index of growth performance Mediterranean stocks was lower than for northwest African coast (Tsikliras et al., 2005). Differences in growth parameters may be due to genetic structure, temperature, food available and diseases (Tsikliras et al., 2005).