Fish eggs are chemically disinfected to reduce the risk of introducing pathogens into fish hatcheries (McFadden, 1969; Amend and Pietsch, 1972; Piper et al., 1982; De Swaef et al., 2015). While a number of methods are used, disinfection with povidone-iodine (iodophor) is one of the most common (Zawada et al., 2014; United States Fish and Wildlife Service, 2021). Povidone has been listed as a Low Regulatory Priority drug by the U.S. Food and  Drug   Administration,   allowing  it  to  be  used  at a concentration of 100 mg/L active iodine for 10 min on fish eggs (United States Food and Drug Administration, 2021). This treatment is effective in reducing, but not eliminating, all bacteria on the external egg membrane (Kumagai et al., 1998; Wagner et al., 2008; Barnes et al., 2009).

The presence of calcium ions in water plays an important role in the survival of freshwater fish eggs (Silva et al., 2003). Calcium influences the permeability of the egg membranes, aids in the regulation of ion loss from the tissues of the fish to the water, and plays a role in allowing or preventing the uptake of certain metals through competitive inhibition (Ingersoll, 1986; Wood et al., 1990; Bijvelds et al., 1998; Matsuo et al., 2004). While calcium, expressed as water hardness, is important during salmonid egg incubation (Brown and Lyman, 1981; Ingersoll, 1986; Wood et al., 1990; Sarkheil et al., 2014), excessive levels can be detrimental (Ketola et al., 1988).

The influence of calcium on egg survival during iodine disinfection is unknown. It is possible that higher calcium concentrations could reduce the egg mortality associated with the elevated iodine levels needed to maximize egg disinfection. Thus, the objective of this study was to evaluate the effects of low and high calcium levels, as measured by water hardness, during egg disinfection treatments using different iodine concentrations on rainbow trout Oncorhynchus mykiss eyed egg survival.

At the start of the experiment, 15 trout eggs were placed in a resealable plastic bag containing one of the twelve iodophor/water hardness solutions for 10 min. After this disinfection, the eggs were placed in another resealable plastic bag with 30 mL of water of the same calcium concentration. The bag was then filled with oxygen for 45-min transport to the incubation location. Upon arrival at the incubation location, the eggs were transferred to sterile, 9.5-cm, plastic Petri dishes containing 30 mL of water of the same water hardness and incubated at 11°C in a small (~0.05 m3) refrigeration unit (model DWC350BLPA; Danby, Findlay, Ohio, USA) using the techniques described by Barnes and Durben (2008) and Neumiller et al. (2016). Four Petri dishes of eggs were used for each of the 12 treatments (N=4; 48 total dishes).

Hatched fry and mortalities were recorded and removed daily, until 17 February 2020, when all eggs had either hatched or deceased. Percent survival was calculated using the following formula (Slama et al., 2021): 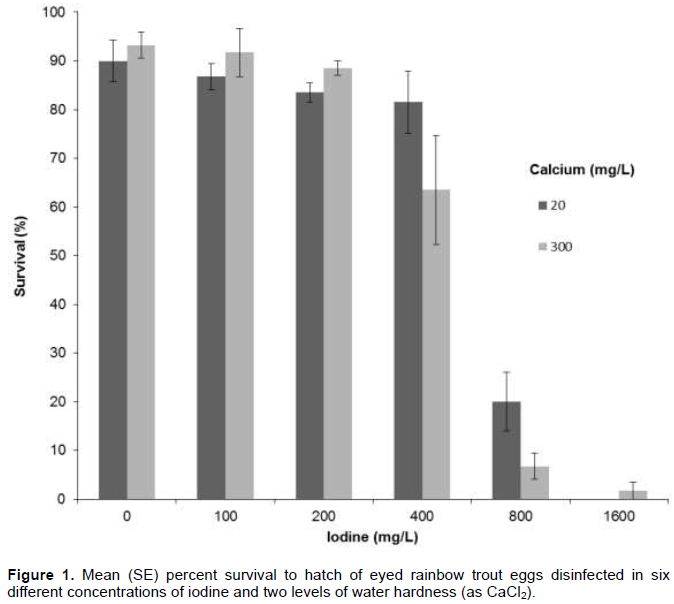 The results of this study indicate that water hardness in the form of calcium chloride did not significantly affect the survival of eyed eggs of rainbow trout subjected to a variety of iodine concentrations during a 10-min disinfection. Because this is the first experiment to examine different water hardness or calcium concentrations during iodine disinfection of fish eggs, it is difficult to determine how these results are compared to other published  studies.  Water  hardness (as calcium) is rarely reported in studies examining the use of iodophors during salmonid egg disinfection, and only two studies have done so. Zawada et al. (2014) and Huysman et al. (2018) used only relatively hard water, ranging from 300 to 360 mL-1 of CaCO3 on salmonid eggs. Zawada et al. (2014) evaluated iodine treatments of only 100 mg/L, whereas Huysman et al. (2018) used iodine concentrations up to 400 mg/L. However, neither study varied water hardness in relation to iodine concentration.

The 10-min iodophor treatment duration used in this study is the standard for treating salmonid eggs (United States Fish and Wildlife Service, 2021; United States Food and Drug Administration, 2021). Longer exposure times can increase iodine?induced egg mortality (Lahnsteiner and Kletzl, 2015) and reducing exposure time in conjunction with increased levels of iodine can mitigate egg mortality (Wagner et al., 2010). While this study showed no effect of water hardness on iodine toxicity to rainbow trout eyed eggs, the effect of water hardness during longer treatment durations is unknown. In addition, this study used only rainbow trout eggs at the eyed stage of development. Iodophor treatments are also routinely conducted during salmonid spawning at water-hardening immediately after fertilization (United States Fish and Wildlife Service, 2021) with species-specific differences in dosage-related mortality (Chalupnicki et al., 2011). The effects of water hardness during water-hardening iodophor treatments are also unknown and cannot be inferred from this study.

In conclusion, the results of this study indicate that water hardness, at either 20 or 300 mg/L CaCl2, had no effect on the toxicity of iodophor on rainbow trout eyed eggs during 10-min treatments. In addition, iodine concentrations up to 400 mg/L can safely be used to disinfect eyed rainbow trout eggs for 10 min without a significant increase in egg mortality.