Effects of feeding rates and feeding frequencies on growth performance, uniformity of the batch and survival rate of Amazon ornamental fish larvae

The aim of this study is to evaluate the effect of different feeding rates and frequencies on angelfish (Pterophyllum scalare) and severum (Heros severus) larvae. For this purpose, two similar experiments were conducted in parallel. For each experiment, a total of 360 larvae were distributed in 36-1 L aquariums. The experiments were done using a factorial 3x3 completely randomized design, with four replicates. The feeding rates of 50, 100 and 150 artemia nauplii larvae-1 and the feeding frequencies of one, two and four meals day-1 were tested. Parameters of growth performance, uniformity of the batch and survival rate were determined at the end of both experimental periods. No interaction was observed between feed rates and frequencies in angelfish for all parameters evaluated; growth performance was higher in fish fed with 150 nauplii larvae-1, which were divided in two and four meals day-1. The severum larvae presented interaction between feeding rates and feeding frequencies; growth performance was higher in fish fed with two and four meals day-1. Thus, in order to facilitate feed management and reduce manpower costs during ornamental angelfish and severum larvae production, it is recommended to supply 150 artemia nauplii larvae-1 divided in two meals day-1 to fish.

Angelfish (Pterophyllum scalare) and severum (Heros severus) are both freshwater cichlid fish, native to the Amazon basin  and  widely  distributed  in  South America (Shukla, 2010). Angelfish has been classified as the most popular freshwater fish species in aquarium trade industry (Garcia-Ulloa and  Gomez-Romero, 2005); it has high economic value due to its elegance, reproductive ability and  adaptability to captivity (Karayucel et al., 2006; Ortega-Salas et al., 2009). Severum, on the other hand, has become widespread because of its predominantly yellowish color with shades of olive green. It presents relatively easy reproduction and good adaptation in captivity (Alishahi et al., 2014).

In contrast to the culture of edible fish, information on the dietary requirements and feeding practices of ornamental fish is limited (Jobling, 2012), especially on their first life stages. Larvae rearing is the most critical step in the aquaculture production chain (Herath and Atapaththu, 2013), as this period involves functional and morphological changes in internal organs, tissue systems and, particularly, in fish digestive tract (Korzelecka-Orkisz et al., 2012).

Nutrition is one of the most important factors influencing the ability of cultured fish to exhibit its full growth potential (Kasiri et al., 2011). In this context, some study has shown that formulated feeds can substitute the need for live feed in larviculture of some species (Maithya et al., 2017), although, for most ornamental fish larvae, live feed is generally considered as the most suitable feed (Conceição et al., 2010). Among live feed used in the aquaculture, artemia nauplii are the most common item (EL-Sebaie et al., 2014), being suitable and convenient food source for edible and ornamental fish larvae (Treece, 2000). Factors such as fish behavior, feed quality, water parameters and feeding practices also influence fish growth (Kasiri et al., 2011).

In aquaculture, failures on feeding practices can lead to weight loss, non-standardized growth and an inefficiency of nutrient absorption, impairing growth performance, as well as water quality of the growing environment (Veras et al., 2016a). Thus, it is important to assess an optimum feeding rate and frequency for fish larvae, since it directly influences the survival and growth of individuals, enabling food scheduling, optimizing manpower and consequently increasing productivity (Abe et al., 2016; Zuanon et al., 2011). Therefore, this study was designed to evaluate the effects of different feeding rates and frequencies and their potential interaction on growth parameters, uniformity of the batch and survival rate of angelfish and severum larvae fed with artemia nauplii.

The experiments were approved by the local Ethics Committee for Animal Use (Protocol n° 7656100517). For each larvae specie, a 2-week feeding trial was conducted at the Laboratory of Ornamental Fish, of the Faculty of Fisheries Engineering, Institute for Coastal Studies, Federal University of Pará, Bragança Campus, Pará State, Brazil.

For each experiment, larvae were fed only with newly hatched artemia nauplii, submitted to three feeding rates: 50, 100 and 150 artemia nauplii larvae-1, in combination with three feeding frequencies: one meal at 08:00 h, two meals at 08:00 and 14:00 h, and four meals at 08:00, 11:00, 14:00 and 17:00 h. An hour after the last feeding, the aquaria were siphoned to ensure the maintenance of water quality, exchanging one third of the water volume. Fish were counted during the cleaning management for the adequacy of feeding rates, in case of mortality. During the whole trial no artemia nauplii surplus was observed, indicating that all artemia nauplii provided were consumed by the fish larvae.

For artemia nauplii hatching, 20.0 g of cysts was divided into twelve containers (1 L) and incubated for approximately 24 h with constant aeration. Water saline concentration was 30 g L-1 and temperature, 28°C. After hatching, aeration was withdrawn and the living nauplii were collected from the suspension of unhatched cysts by siphoning. A pipette was used to withdraw a 0.5 mL volume of nauplii, counted in triplicate through a stereomicroscope to obtain a mean value.  Artemia nauplii were then filtered through a 120 µm mesh and washed twice with running freshwater to remove impurities, reduce salinity and ensure food quality. After estimating nauplii density, the volume of artemia nauplii to be supplied in each treatment for each experiment was calculated.

At the end of each feeding trial, after 12 h of starvation, all fish from each aquarium unit were counted and weighed on a precision scale (model AG200 Gehaka® 0.0001 g) to evaluate the growth performance parameters of final weight, weight gain (final weight - initial weight), specific growth rate ((ln final weight - ln initial weight) days-1) x 100) and the weight and length uniformity of the batch. To determine the batch uniformity, the following equation by Furuya et al. (1998) was used: U = (N ± 20%)/Nt) X 100, where: U = the uniformity of the batch, that is, variation in weight or total length (%); Nt = the total number of fish in each experimental unit; and N ± 20% = the number of fish with weight or total length ± 20% of the mean for each experimental unit. Survival rate was evaluated every day. Individuals were considered dead when spontaneous movements or responses to mechanical stimuli were lacking. Dead fish were removed from the aquarium and counted  to  calculate  the  survival rate.

Both experiments were conducted using a completely randomized design with four replicates, testing three different feeding rates and frequencies in a factorial 3×3 design. Normality was assessed via the Shapiro–Wilk normality test (P < 0.05) and the Cochran test was used to establish the homogeneity of variance. Using the Statistic software version 7, data were evaluated by two-way analysis of variance (P < 0.05). If no interaction between feeding rates and frequencies was detected, one-way ANOVA (P < 0.05) of single factors was performed. In case of differences, the Tukey test at a probability level of 5% was performed.

There was no interaction between feeding rates and feeding frequencies on the growth performance of angelfish larvae (P > 0.05). Final weight, weight gain and specific growth rate were higher in fish fed with 150 artemia nauplii larvae-1. Also, there was an improvement of growth performance of angelfish larvae fed with artemia nauplii divided in two and four meals day-1. Weight uniformity was higher in angelfish larvae fed with four meals day-1 and was not affected by the feeding rates. Survival rate and length uniformity were not affected by the feeding rates or feeding frequencies (Table 1). 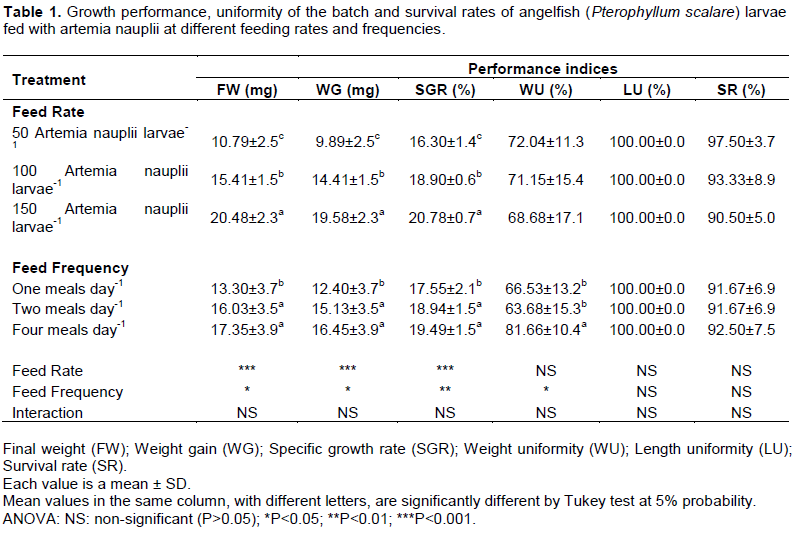 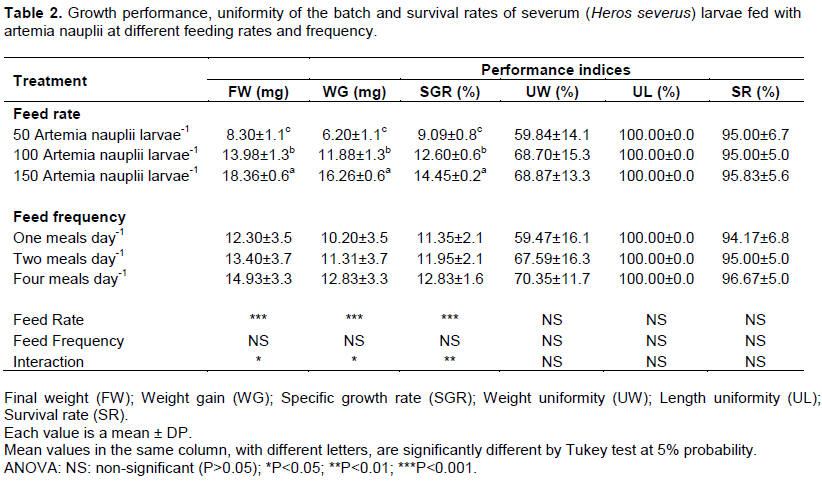 In the present study, fish that received 150 artemia nauplii larvae-1 presented the best results of growth performance, regardless of the specie. Similar results were observed in pyrrhulina (Pyrrhulina brevis) larvae, another Amazon ornamental fish, which had the best feeding rate set at 150 artemia nauplii larvae-1 (Abe et al., 2015).  Different  results  were  found  during   the  larvae rearing of pacamã (Lophiosilurus alexandri). It is recommended to supply 1600 artemia nauplii larvae-1 divided in three feeds daily, for higher values of weight and total length (Santos et al., 2015). These different results indicate that, although the optimal feeding  rate  is specie-specific, more effort is needed to determine an optimum feeding practice (EL-Sebaie et al., 2014), especially in first life stages of ornamental fish production.

Determining  the  optimal  feeding  rate  should be done aiming food utilization improvement and reducing production costs (Abe et al., 2016). Both, excess and lack of food can be harmful to fish health and may increase their susceptibility to diseases and parasites (Lee et al., 2000). The excess of live food also makes the activity more costly (Luz and Portella, 2005; Zuanon et al., 2011). In addition, excess supply of artemia nauplii may promote water quality reduction, since it presents rapid mortality in freshwater (Santos et al., 2015).

The appropriate feeding rate is directly related to feeding frequency. Thus, it is important to establish how many meals the defined amount of food will provide. When larvae of freshwater fish are fed with live marine organisms, such as artemia nauplii, optimal feeding frequency is critical to increase fish opportunity to consume live nauplii, improving nutrient uptake (Portella et al., 2000) and avoiding possible problems with water quality. In the present study, although no interaction was observed between feeding rates and feeding frequencies by angelfish, increasing of feeding frequency had an improvement effect on growth performance. Once higher weight gain was observed when angelfish was fed two or four meals a day. For severum, different from the results reported by Abe et al. (2016), the interaction observed between feeding rates and feeding frequencies reduced the feed frequency for two meals daily, when the larvae was fed with 150 artemia nauplii larvae-1.

Feeding frequency has a significant effect on feed conversion ratio and growth (Kasiri et al., 2011). Normally, by using a reduced feeding frequency for fish in early developmental stages, the amount of food might exceed the intake capacity of the animal (Veras et al., 2016b). This excess consumption can lead to a rapid passage of food through the digestive tract and decrease the efficiency of digestion and absorption of nutrients (Luz and Portella, 2005). On the other hand, high feeding frequency increases manpower costs and can lead to a greater dispute between individuals, which may also affect the development of the animals (Hayashi et al., 2004). Dominant fish consume more of the provided food (Gonçalves Júnior et al., 2013) and are benefited by inadequate feeding frequency. Thus, an adequate feed frequency can lead to greater uniformity and survival, which facilitates the management and marketing of fish (Hayashi et al., 2004).

For ornamental fish a uniform development is important, as they are marketed individually (Abe et al., 2016). Although the weight uniformity of angelfish larvae was higher by fish fed four meals a day, there was no significant difference in the length uniformity. The length uniformity of the batch facilitates the handling of individuals within the production system, as well as the marketing of species. Thus, since ornamental fish commercialization usually takes the length of the animals and the unit value into consideration (Veras et al., 2016b), the lack of weight uniformity in angelfish fed two meals a day may not be a problem.

The survival rate of both specie larvae tested in the present study did not show significant differences. Similarly, severum larvae submitted to different feeding rates and frequencies also did not present differences in survival rates (Abe et al., 2016). The sociability of the fish larvae and its preference for living in shoals (Gómez-Laplaza, 2006) may have contributed to the observed survival rates, since the negative interactions of territorialism were not intense enough to justify a reduction of this parameter.