This study discusses the first recorded occurrence of the Red Sea goatfish, Parupeneus forsskali in the Egyptian Mediterranean waters, to the best of the authors’ understanding. On 31 January 2016, a single specimen of this species was captured from Alexandria coastal waters (31°16'N; 30°10'E), Mediterranean Sea, Egypt. The collected specimen represents the first record of P. forsskali in the Egyptian Mediterranean waters. This specimen has a total length of 26.5 cm, fork length of 23.0 cm and standard length of 21.5 cm and weighed 228.4 g (total weight). The finding of this paper confirms the establishment of this Lessepsian immigrant along the eastern Mediterranean.

The goatfish (family: Mullidae) is a commercially important demersal species, living mostly in sand, muddy sand or gravel bottoms at depths ranging from 10 to 120 m (Golani, 1994). The family consists of six genera and up to 87 species that are distributed in the Atlantic, Indian and Pacific Oceans (Fishbase, 2015). All goatfishes are marine species and have a great commercial importance all over their area of distribution. Five species of goatfishes are present in the Mediterranean Sea: the indigenous Mullus barbatus (Linnaeus, 1758) and Mullus surmuletus (Linnaeus, 1758); the exotic Upeneus moluccensis (Bleeker, 1855) and Upeneus pori (Ben-Tuvia 1989)  of  Indo-Pacific  origin;  and  Pseudupeneus prayensis (Cuvier, 1829) from the Atlantic (Reina-Hervás, 1987; Golani, 1994; Azzouz et al., 2011).
The Red Sea goatfish or Forsskål’s goatfish, P. forsskali (Fourmanoir and Guézé, 1976) is an Indian Ocean species that is native to the Red Sea and Gulf of Aden and recorded from Socotra (Randall, 1983, 2004). It is recognized by a black stripe, which runs from the tip of its snout, through the eye, along the lateral line and ending beneath the posterior part of second dorsal fin. A black spot is also present on the upper side of the caudal peduncle (Randall, 1983, 2004). It is common in shallow water of Red Sea and on sandy bottoms near coral reefs. It feeds  on  benthic invertebrates and can reach 28 cm in length (Golani, 1999; Al-Rousan et al., 2005). This species is Suez Canal migrant and now established in the eastern Mediterranean (Çinar et al., 2006; Bariche et al., 2013; Sonin et al., 2013; Gurlek et al., 2016). The previous studies did not mention that this species is recorded in the Egyptian Mediterranean waters (Halim and Rizkalla, 2011; Mehanna, 2015).
Here, the Red Sea goatfish, P. forsskali was present for the first time in the Egyptian Mediterranean waters.

The Egyptian Mediterranean coast is about 1100 km extending from El-Sallum in the West to El-Arish in the East. Fish samples are routinely carried out monthly by the Fish Population Dynamics Lab, National Institute of Oceanography and Fisheries (NIOF), Egypt from the commercial catch in different fishery resources (marine and inland fisheries). On 31 January 2016, a single specimen of Red Sea goatfish, P. forsskali was observed among the goatfish sample collected from Alexandria fishing ground (31°16'N; 30°10'E) (Figure 1). It was captured among the other goatfish species using a trammel net which was set at around 40 m over the hard bottom. The specimen was identified according to FAO identification sheets and was preserved in 4% formalin for further investigation. Morphometric and meristic characteristics as well as most diagnostic features were recorded and counted with a digital caliper.

On 31 January 2016, a single specimen of Red Sea goatfish, P. forsskali (265 mm TL; 215 mm SL) was observed among the other goatfish species caught by the trammel nets operated in Alexandria fishing ground.
Description of the captured specimen
Body of fish was oblong, with a spine on the outer margin of operculum (Figure  2). Head length (HL) 3.41 in SL; barbel length 1.50 in HL; pectoral fin length 1.57 in HL; pelvic fin length 1.5 in HL; the longest dorsal spine 1.2 in HL. Dorsal fin spines were VIII while the soft rays were 9; anal fin I, 7; pectoral fin rays 16 with forked caudal fin; Lateral line with 30 large scales, extending on caudal fin; gill rakers 7+21. One row of teeth on both jaws, not visible when mouth is closed. No teeth on vomer and palatines (Figure 3 and Table 1). 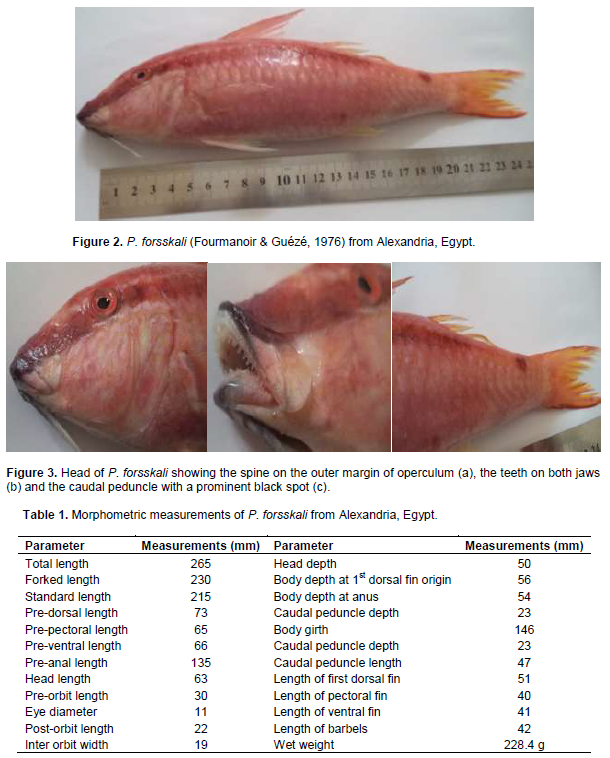 The opening of the Suez Canal initiated an on-going process of marine introductions, mainly from the Red Sea into the Mediterranean Sea (Galil, 2006). The majority of non-indigenous species in the Mediterranean Sea have been introduced through this way (Coll et al., 2010) in a process termed ‘Lessepsian migration’ (Por, 1978) or ‘Erythrean invasion’ (Galil, 2000). Some of these species thrive and start to take over native biodiversity and affect human livelihoods and these are known as invasive species, but many of them are established in their new environment and became of a great commercial importance.
Many Lessepsian species populations were established in the Egyptian Mediterranean waters, and became commercially important (goatfishes). Members of the genus Parupeneus were previously recorded from different parts of the Mediterranean (Çinar et al., 2006; Bariche et al., 2013, Sonin et  al.,  2013;  Gurlek  et  al., 2016). The Red Sea goatfish has been recorded for the first time off Mersin, Turkey at northeastern Mediterranean (Çınar et al., 2006), from Beirut, Lebanon (Bariche et al., 2013) and from southern edge of Haifa Bay, Israel (Sonin et al., 2013). Recently, Gurlek et al. (2016) recorded this species for the second time in the Turkish waters and for the first time in Iskendrun Bay. All descriptive characteristics, measurements and counts observed for this species in the Egyptian Mediterranean waters were in the range given in the previous studies (Ben-Tuvia, 1986; Al-Absy, 1988; Ben-Tuvia and Kissil, 1988; Khalaf and Disi, 1997; Çinar et al., 2006; Bariche et al., 2013; Sonin et al., 2013; Gurlek et al., 2016).
For the Egyptian waters, the check list of El Sayed (1994) included 31 Erythrean fish species out of a total of 257. Rizkalla (1997) and Gamee (2005) reported 38 Erythrean fish species. Halim and Rizkalla (2011) and Mehanna (2015) added four new records of Erythrean fishes being present along the Mediterranean Egyptian coasts, bringing the list to a total of 42 species. The Red Sea goatfish, P. forsskali has never been listed or recorded from the Egyptian Mediterranean waters before. Therefore, the collected specimen represents the first record of P. forsskali in the Egyptian waters.