The physico-chemical parameters and plankton abundance of four artificial fish ponds in Omageyu Farms, Ijotun, Badagry, Nigeria was studied and analysed using standard methods monthly from June to December 2015. Water temperature, pH and dissolved oxygen ranged from 27.80 to 32.00°C, 6.90 to 7.40 and 6.80 to 10.00 mg/l, respectively in the four ponds. Water temperature, pH, and dissolved oxygen in Pond A were significantly different from Ponds B, C and D. Forty-five planktonic organisms, including 40 phytoplankton and 5 zooplankton species, were identified. Shannon Weiner index was highest for pond A = 2.824 and decreased in the order: pond C = 2.81, pond B = 2.797 and pond D = 2.767. Margalef’s index of species richness was greatest for pond D = 2.313 and least for pond A. Berger-Parker Dominance Index (BPDI) for the ponds decreased in order of ponds A = 0.2422, C = 0.2328, B = 0.192 and D = 0.1858. Total plankton in the four ponds showed positive correlation with dissolved oxygen. The class Chlorophyta was the prevalent group in the four ponds. The results showed that physico-chemical parameters have an influence on the distribution and diversity of plankton in earthen fish ponds.

Fish appears as a cheap source of protein and an important international trade commodity in many regions and across the global market. It has contributed to the economic growth of various countries around the world. In Nigeria, aquaculture has produced an output of 15,489 tonnes per annum (Ozigbo et al., 2014), which contributed 1% to the Fisheries subsector (FDF, 2005); this, however, seem to contribute to the fulfillment of protein demand across the country. The curtailing of food insecurity encourages employment opportunities, promoting income generation for individuals and employees across the sub-Saharan African Country. It implies that fisheries have contributed immensely to increasing the output of agriculture which further contributes 34% (Ozigbo et al., 2014) to the country’s Gross Domestic Product (GDP). The high cost of feed is related to fish-meal, whereas zooplanktons and other herbivorous aquatic organisms are seen as cheaper alternatives or supplements.

Water is the physical support in which aquatic organisms carry out their life functions such as feeding, breeding, digestion and excretion (Bronmark and Hansson, 2005). The monitoring of physico-chemical characteristics of a water body is vital for both short and long-term analysis, because the quality, distribution and productivity level of organisms in a water body are largely governed by its physico-chemical and biological factors (Ashton and Schoeman, 1983; Adakole et al., 2003). Water quality in fish ponds is often due to the interactions of several physico-chemical components and can have profound effects on pond productivity, the level of health and fish health.

Phytoplankton is important in fish farming because it is a primary producer (Yisa, 2006; Bwala et al., 2009). In the aquatic environment, all life forms depend on phytoplankton species, as they are at the base of the food chain, serving as food to zooplanktons and other herbivorous aquatic organisms (Verlencar and Desai, 2004). Phytoplankton occurs naturally in water bodies, but often it may be introduced from cultures to serve as food supplement for fish. Phytoplankton has also been reported to cause fish poisoning in many parts of the world, due to the ability of some species to form toxins during blooms (Cook et al., 2004). Phytoplankton plays an important role as bioindicator of water quality (Tiseer et al., 2008). Zooplankton also plays an important role in the food chain, being in the second trophic level as primary consumer and also as contributors to the next trophic level (Rahman and Hassain, 2008). The zooplankton community is a dynamic system that responds quickly to environmental changes. The relationship between the physico-chemical parameters of water quality and plankton production in fish ponds is of great importance and essential for fish culture (Islam, 2007).

This study is designed to investigate the physico-chemical parameters, phytoplankton and zooplankton composition in earthen ponds. Results of this study will be of immense value to the local aquaculture industry in Nigeria.

Water samples were collected monthly for  seven  months  between June and December, 2015. Samples for physico-chemical analysis were collected in 1-L plastic jars from the middle of each pond. Dissolved Oxygen (DO), temperature (°C) and pH was determined using a Horiba U-10 water quality checker. Alkalinity and hardness were determined using methods described by APHA (1998).

A modified standard phytoplankton net, 55 µm mesh size was dragged for three minutes in each pond just below the water surface to collect plankton monthly for seven months (June to December, 2015), including small-celled phytoplankton, which was collected in a detachable bucket (glass jar) at the rear end of the equipment. After dragging, the water collected in the detachable bucket jar was transferred into plastic bottles enclosed in polystyrene to prevent the water from pouring out.

Identification of the phytoplankton species was done using a phase contrast light microscope (Olympus Tokyo) at 10×40 magnification (Model No: 602980). The magnification for all organisms viewed was x400. Quantitative analysis of phytoplankton was done on Sedgewick-Rafter counting chamber (S-R cell). Analysis involved transfer of 1 ml sub-sample from each of the samples to the Sedgewick-Rafter counter and counting of cells within 5 squares of the cells, chosen randomly. Plankton quality analysis and identification was done using internationally accepted taxonomic keys of Edmonton (1959), Prescott (1970) and Sharma (1986).

The number of organisms per mm was calculated using the following formula:

Descriptive statistics of data for water quality analyses and plankton was done using Microsoft Excel, while the paleontological statistics software package for education and data analysis was used to calculate the; Number of Species, Individuals, Shannon Weiner Index (H), Simpson Diversity index (1-D), Evenness (e^H/S), Menhinicks Index, Margalef’s Richness index, Equitability_J, Fisher_Alpha and Berger-Parker dominance index. Analysis of variance (ANOVA) was used to test for statistical differences between the means of the physical and chemical parameters of the fish ponds. The strength and pattern of association between the water quality parameters and Plankton abundance in each pond within the sampling period was established using Pearsons Correlation Analysis in the SPSS version 20.0 software.

The physico-chemical  parameters examined for the four ponds  were in a suitable range of water quality for fish survival according to Erondu (1991), Akinwole and Faturoti (2007) and Hoff et al. (2001). According to Roberts et al. (1997), maximum temperature range for aquatic life is considered to be 20-33°C, and the temperature range recorded for the duration of the experiment was 27.8 - 32.0°C, which suggested that the range was suitable for fish growth and plankton proliferation.

According to Hoff and Snell (2001), the optimum pH range for plankton production is between 6.5 and 9.5. The pH recorded within the sampling period ranged between 6.90 and 7.40, which is within the optimum range for plankton production and fish growth. Alkalinity normally reflects carbonate content of rocks and soils of water sheds and bottom mud (Jobbágy and Jackson, 2001). The relatively lower values of alkalinity recorded during the July may be attributed to the dilution effect of the rain during this period.

Relative abundance of plankton in the four ponds 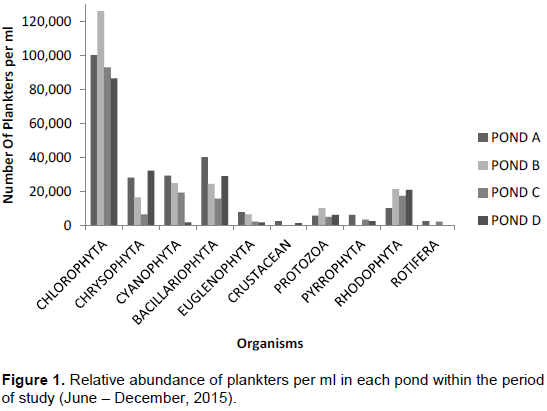 The composition of phytoplankton community of the ponds agreed with reports that blue-green algae and green algae dominate most tropical water bodies (Adebisi, 1981; Ayodele and Ajani, 1999). It has been reported that increase in primary production (phytoplankton) is accompanied by increase in zooplankton abundance (Rocha et al., 1999). Zooplankton  forms   about   5%   of   the   total   plankton population in Catfish fries to fingerlings pond (A) and lesser in the other ponds.

Total abundance of plankters in each pond per month

The results showed that phytoplankton composition and their abundance are variable in freshwater fish ponds even within the same farm environment. Temperature, dissolved oxygen, photo-period, insolation, water pH, wind, seasonal variations, water characteristics, nutrient enrichment and predator-prey relationship may be related to variable changes in the phytoplankton distribution and their abundance in ponds’ water.