Anaesthetics are often used in aquaculture, fisheries and biological researches as a way to minimizes fish hyper-motility which is a considerable source of injuries during handling  procedures (Cho  and  Heath, 2000;  Rose  and Rose, 2008; Olufayo and Ola, 2010). The consequent damages from such accidents succumbed fish to increase the susceptibility to pathogens and infection diseases   (Rose  and  Rose,  2008). Therefore,  reducing fish motility by anaethetics may decrease the undesirable handling consequences (Rose and Rose, 2008). There are many researches on the physiological effects of different anaesthetics on fishes and clove oil has received favourable reviews as an alternative anesthetic for different fish species (Okey et al., 2013; Hitoki et al., 2011) due to the antifungal and antibacterial properties (Keene et al., 1998; Cho and Heath, 2000). Plant naturally possess substances which are used by man in production of medicine especially antibiotics (Okwu and Josiah, 2006), thus, their importance in aquaculture and fishery management is very important.

Clove oil is an organic natural product, a dark brown liquid resulting from distillation of flowers, flower stalks and leaves of Eugenia aromatica (Nagababu and Lakshmaiah, 1992), its contains 70 to 90% eugenol, more than 17% eugenol acetate and 12% kariofilen. It is derived from the stem, leaves and buds of Eugenia caryophylatta tree and its active ingredients are eugenol (a-methoxy-4-2 (2-propenyl)-Phenol and isoeugenol (4-propenyl-2-methoxy phenol).

The use of clove oil is more potent than synthetic anaesthetics used in fish and its efficacy as an anaesthetic for various fish has been demonstrated in various fish species (Olufayo and Ola, 2010, Dang- Won Seol et al., 2007) and the U.S Food and Drug administration has considered it as safe compound (Summerfeit and Smith, 1990) for use in biological research.

Some research works have been carried out using clove oil as anaesthetics on different fish species: Alok et al. (2014) and Hajek (2011) worked on common carp (Cyprinus carpio); Cho and Heath (2000) worked on Chinook salmon (Oncorhynchus tshawytscha); Veliek et al. (2006) and Olufayo and Ola (2010) worked on African catfish; Keene et al. (1998) and Prince and Powell (2000) worked on rainbow trout (Oncorhynchus mykiss); Anderson et al. (1997) and Prince and Powell (2000) investigated the effects of clove oil rainbow trout; while Woody et al. (2002) worked on adult sockeye salmon. The main objective of this study was to investigate the effects of clove oil on H. bidorsalis juveniles using haematological parameters to assess the changes in the test fish induced by the anaesthetic.

One hundred and fifty healthy juveniles of H. bidorsalis (weight 25.8 g) were obtained from Ayoola Commercial Fish Farm, Nigeria and were transported in pond water at 23°C temperature to the Department  of  Fisheries and Aqua  culture Technology  Laboratory at Federal University of Technology Akure in a plastic container containing 50 L of fresh water to reduce stress. The fish were acclimated in the laboratory in a well aerated large fibre glass holding tank (1500 L volume) for one week. The fish were fed during the acclimation period with Coppen feed according to their body weight, but were unfed for 24 hours prior to the test in order to minimize the production of waste, thereby reducing ammonia production from the wastes.

Ten fish were distributed each into prepared anesthetic baths of different concentrations of clove oil in duplicates with a control with 10 L of water in twelve plastic tanks each (n=10 fish/tank) and the hyper-activities of the test fish, changes in the body color, loss of sensitivity to stimuli, motionless (induction time) and other behavioural activities were observed. Individual test fish were transfer to a recovery tank (50L) as they reach anesthesia and recovery time was established at the point when the animal recovered normal activities and regular breathing. Blood was collected into a syringes containing 0.5 mg disodium salt of Ethylene Diamine Tetra-acetic acid (EDTA) during anaesthesia state. This anticoagulant prevented the blood from clotting. The following haematological parameters were measured from the blood samples collected before, during and after recovery from anaesthesia: haematocrit (RBC),haemoglobin (Hb), erythrocytes (RBC), leucocytes counts (WBC), mean corpuscular volume (MCV), mean corpuscular haemoglobin (MCH) and mean cell haemoglobin concentration. All these parameters were determined using standard methods.

Dissolved oxygen (DO), pH, temperature and conductivity in each aquarium were measured and observed before the   experiment, during the 96 h exposure and after the experiment using the methods described by APHA (1989).

Linear regression and graphs were used to determine the relationship between concentration, induction and recovery time while experimental data were analyzed using one way analysis of variance (ANOVA) to test for significant differences. Standard deviation (SD) and Pearson correlation coefficient were calculated. Significance was  set  at  P  <  0.05.  All  analyses  were  performed using statistical package for social sciences (SPSS) software (version 17.0, 2015). 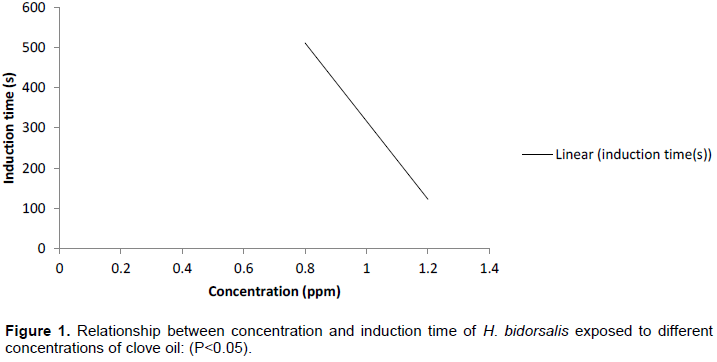 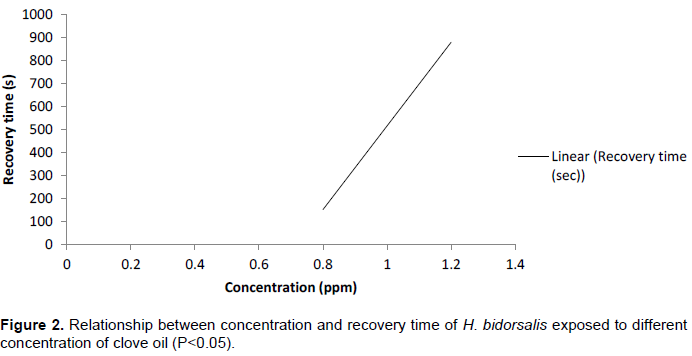 Table 3 shows that the haematological parameters measured were significantly affected by clove oil. Treatment with clove oil caused a progressive decrease (P < 0.05) in the PCV values (26.00±2.83 to 16.00±1.41), HB (8.70±0.14 to 5.90±0.42), MCV (130.00±14.14 to 70.70±14.14) and increase in MCH values (32.41±5.43 to 38.61±6.12) and WBC (29.50±6.36 to 73.50±49.50) when compare with the treatment in the control tanks. The RBC and MCHC values vary within different concentrations of clove oil (1.80±0.14 to 2.85±0.07 and 26.30±0.14 to 41.75±2.47) respectively. Exposure of H. bidorsalis juveniles to clove oil caused significant decrease in PCV, HB, RBC and MCV. This significant reduction may be an indication of severe anaemia caused by clove oil on the exposed fish. This finding agreed with Olufayo and Adeyanju (2012) who worked on haematological effect of neem leaves (Azadirachta indica) on H. bidorsalis and reported that the toxicant caused a significant decrease in PCV, Hb, RBC, MCHC and MCV.of H. bidorsalis Otherwise, increase in the values of MCH and WBC of the fish, may be due to the physiological reaction of the fish to the effects of stress induced by the anaesthetics used. This was attributed to a generalized stress response resulting from increased pituitary inter-renal activity which agreed with Thompson and Eling (1989).

The  behaviors   exhibited  by  the  test  fish  ranged from slight loss of reactivity to external stimuli at lower concentrations toincreased opercula rate; erratic swimming; partial and total loss of equilibrium and  loss of reflexes in fish exposed to higher concentrations of clove oil. Results from this experiment agreed with previous works, which reported that H. bidorsalis juveniles exposed to toxicants or anaesthesia usually exhibits changes in opercula rate, erratic movement and different behavioral activities (Olufayo and David, 2009; Akinbulumo, 2004). The observation of fish responses in this experiment also agreed with Pascuel el al. (1994), which says fish settled at the bottom of experimental tanks indicates stress or weakness.

Clove oil is effective, relatively safe and economically sustainable anaesthetic agent. It is environmental friendly at low concentration and less persistence in aquatic environment. The results of this study provide baseline information on the responses of H. bidorsalis to various concentrations of clove oil and show that active anaesthetic components of clove oil could be used as potential anaesthesia at concentrations 0.8 to 1.0 pmm when associated with a reasonable recovery time and mortality. It does not cause irreversible damage in H. bidorsalis, therefore, the use of clove oil in fisheries should be encouraged in preference to synthetic anaesthetic such as MS22 when searching for medicinal plants with anasthetic active compound.