Genetic variability is a prerequisite to crop improvement. The objective of the present study was to assess and quantify the genetic variability, estimate heritability and genetic advance for yield and yield contributing characters of released and pipeline chickpea varieties based on agro- morphological traits. A total of 16 chickpea materials (8 improved varieties, 7 advanced lines, and one local check) were planted in Randomized Complete Block Design (RCBD) with three replications at Shambu, Hawa Galan, Mata, Alaku Belle, and Badesso, in Western Ethiopia. Important agronomic data were collected and subjected to analysis using statistical analysis software (SAS). The combined analysis of variance (ANOVA) indicated highly significant differences (P≤0.01) among chickpea genotypes for grain yield and other agronomic traits except for number of seed per pod and branch per plant, indicating the existence of ample genetic variability among present chickpea genotypes. Genotypic coefficient of variation (GCV) and phenotypic coefficient of variation (PCV) for the character such as grain filling duration, days to flowering and hundred seed weight, showed very small difference demonstrating that the observed variations for these traits were mostly due to genetic factors with little impact of environment. The higher heritability coupled with higher genetic advance was noted for 100 seed weight, number of pods per plant, number of seed per pod and grain yield signifying the ease of phenotype-based selection for the improvement of those traits.

Among pulses, chickpea (Cicer arietinum L.) is the fourth leading grain legume primarily grown for food and feed as well as soil fertility amendment in Ethiopia (CSA, 2015). Besides, Ethiopia is known as secondary center of origins for different crop in general and for chickpea in particular. Regardless of its importance and presence of immense genetic variability, its yield is by far below its potential. This yield gap can be altered through proper manipulation of variable genotypes and thereby used in a breeding program. The main objective of any breeding programs in the world is to produce high-yielding and better-quality lines for release as cultivars to farmers and commercial growers. The prerequisite to achieving this goal is to find sufficient amount of variability.
For long-time, plant breeders were aware that predominant portion of phenotypic variation were accounted for by environmental variation than from genotypes and genotypes by environmental interactions. Thus, in-depth knowledge of genetic variation has paramount importance for yield and its component improvement in any crop as the observed variability is a combined effect of genetic, environments and various interactions between genes and environments, of which only the former one is heritable. Genotypic variability is, therefore, the component of variation which is due to the genotypic differences among individuals within a population and is the main concern of plant breeders all over the world (Tadesse et al., 2016).
Selection would generate promising genotypes only if the source germplasms used in crossing are genetically diverse (Ali et al., 2008). When genetically diverse parents were chosen for crossing, there is a likelihood of producing heterotic progenies and advance required genetic recombination. However, the amount of genetic variability present in any genotypes will not merely dictate the selection of superior genotypes. Therefore, in addition to the existence of genetic variability, the extent to which the characters in questions are transmitted from parents to offspring is very important to draw realistic conclusion vis-à-vis superior selections (Falconer and Mackay, 1996). Transmission of a quantitative trait from parents to offspring which by itself is highly influenced by genotype and environment interaction and traits with low heritability might not be improved through selection.
Additionally, the estimates of heritability alone do not lonely deliver an idea about the expected gain in the next generation but should be considered in conjunction with estimates of genetic advance, the change in the mean value among successive generations (Johnson et al., 1955; Shukla et al., 2006). Assessment of genetic variability using appropriate tools such as genetic coefficient of variation, heritability estimates, and genetic advance is, therefore, undeniably indispensable to boost yield as well as the quality of any crop and/or forage in any breeding program (Ali et al., 2008). The objective of the present study was, therefore, to assess and quantify the genetic variability of chickpea germplasm grounded on agro-morphological traits and evaluating heritability and genetic advance among desi type chickpea genotypes for yield and yield contributing characters. 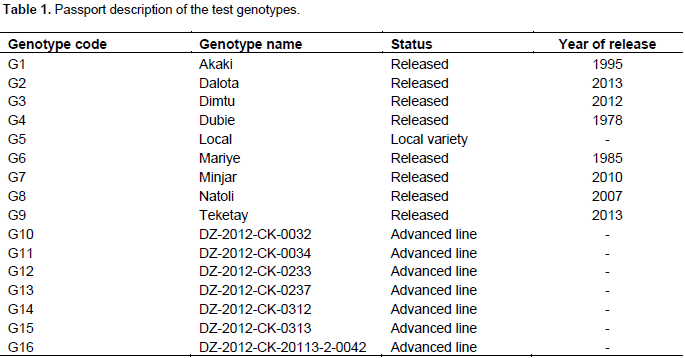 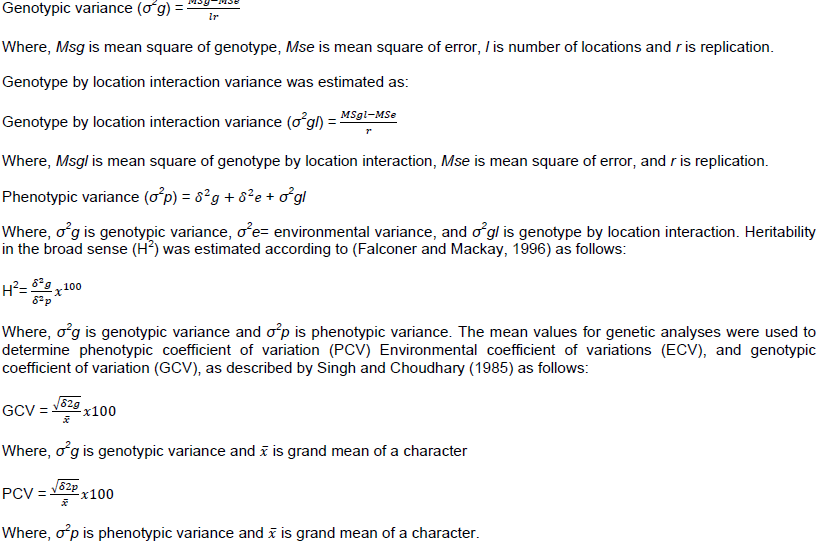 The combined analysis of variance (ANOVA) for grain yield and other agronomic traits of 16 chickpea genotypes grown at five locations in 2016/2017 is shown in Table 2. The analysis of variance (ANOVA) indicated highly significant differences (P≤0.01) among chickpea genotypes for grain yield and other agronomic traits except for seed per pod and branch per plant demonstrating the presence of ample genetic variability among chickpea genotypes. Once the presence of genetic variability is secured, it is the task of the breeder to separate the heritable portion from the non-heritable part to plan for the proper breeding program. This might give an opportunity to plant breeders to improvement of characters with high heritability via selection.

It can be concluded that direct selection can be done for most of the yield attributing traits since it exhibited high genetic variability and high range of variation. Traits with high heritability and genetic advance such as 100 seed weight, number of seed per pod and grain yield will grant superior genotypes through phenotypic based selection.

The authors are grateful for the chickpea peer grant scheme (USAID) and Oromia Agricultural Research Institute for financial support.