The study was conducted with the objective of determining the carcass characteristics of Begait sheep fed hay basal diet and supplemented with different levels of Tsara (Pterocarpus lucens) leaves, pigeon pea (Cajanus cajan) leaves and concentrate mixture on iso-nitrogenous basis to supply 66.60 g/day crude protein on dry matter (DM) basis. Twenty five yearling male Begait sheep with initial body weight (BW) of 24.2±1.1 kg (Mean±SD) were used in a Randomized Complete Block Design (RCBD) based on their initial BW. The hay was fed on ad libitum basis to all sheep. Treatments were hay alone (T1) or supplemented with 400 g DM Tsara leaf (T2), 320 g DM pigeon pea leaf (T3), 360 g DM  mixtures of Tsara and pigeon pea leaves (T4) and 300 g DM concentrate mixture (75% rice bran and 25% sesame seed cake; T5). The study consisted of 90 days feeding trial and carcass evaluation at the end. The average final body weight was 32.2, 31.6, 27.76, 28 and 26.88 kg (standard error of mean, SEM = 0.38) in the order of T5 > T2 > T3 = T4 > T1. Hot carcass weight of 14.9, 14.3, 11.3, 11.2 and 9.5 (SEM = 0.33) followed almost a similar trend to that of the final body weight except that values for T2 and T5 were similar. In conclusion, based on the biological performance results supplementation of concentrate mixture (T5) and Tsara (T2) induced a comparable response and were better than the supplemental regimes that contained pigeon pea and are therefore recommended.

Small ruminants occupy an important economic and ecological niche  in  agricultural  systems  throughout  the developing countries (Devendra, 2005). According to FAO  (2009),  in   Ethiopia,  small  ruminants  (sheep  and goats) are important components of the livestock sub-sector. Therefore, sheep and goats are among the major economically important livestock, playing an important role in the livelihood of resource poor farmers (Adane and Girma, 2008). They contribute a quarter of the domestic meat consumption, about half of the domestic wool requirements, about 40% of fresh skins and 92% of the value of semi processed skin and hide export trade (FAO, 2004). There is also a growing export market for sheep and goat meat in the Middle Eastern Gulf States and some African countries. At optimum offtake rates, Ethiopia can export 700,000 sheep and 2 million goats annually, and at the same time supply 1,078,000 sheep and 1,128,000 goats for the domestic market or consumption (Adane and Girma, 2008).

The current annual offtake rate of sheep and goats is however, only 33 and 35%, respectively (Adane and Girma, 2008; FAO, 2001). The average carcass weight of Ethiopian sheep and goats is 10 kg, which is the second lowest in sub Saharan Africa (FAO, 2001). On the other hand, the increased domestic and international demand for Ethiopian sheep and goats has established them as important sources of Inland Revenue as well as foreign currency. This increased demand also creates an opportunity to substantially improve food security of the population and alleviate poverty (EPA, 2002; Adane and Girma, 2008; FAO, 2009). However, currently the majority of indigenous sheep marketed have low live weight resulting in poor dressing percentage and carcass (Ameha et al., 2011). This is mostly associated with the deficiency of dietary energy and protein levels which can influence the quality and quantity of carcass (Bellof and Pallauf, 2004).

Inadequate nutrition is one of the complex factors that generally affect livestock productivity in the tropical countries. Total weight gained by ruminants during the rainy season is lost in the dry season due to feed scarcity; this feed fluctuation affects growth and carcass traits of small ruminants (Woods et al., 1994).

The available feed resources in Tigray region of Ethiopia are mainly crop residues, natural grazing and hay from natural pasture; these feed resources are characterized by their low crude protein content; which is below the critical requirement of ruminant production, 7% of crude protein and this level of crude protein reduces feed intake and dry matter digestibility of the animals (Devendra and McLeroy, 1982). On the other hand, the western and north western zones of Tigray region, northern Ethiopia, are endowed with a diversified livestock resources and wider rangelands with dominant browse species coverage (CSA, 2014). Among these resources, Begait sheep is one of the indigenous small ruminant breeds reared in the area; which is a sub type of north Sudan desert sheep and is characterized as tall, long tailed, consume large amounts of feed, muscular body size, dual purpose breeds (for milk and meat) and known    for    its    good    productive    and   reproductive performance (FAO, 1991; Amare et al., 2012). In addition, Tsara (Pterocarpus lucens), pigeon pea (Cajuns cajan) and concentrate feeds like rice bran, sesame seed cake are available and commonly used by the farmers to feed their animals but not on a scientific basis.

In addition, Hunegnaw and Brehan (2016) reported that the significantly higher results of valuable carcass traits when Wollo sheep fed grass hay and supplemented with legume forage leaf meal (pigeon pea, cow pea and lablab) as compared to sheep that supplemented with concentrate feed.  Therefore, the objective of this study was to determine the carcass characteristics of Begait sheep supplemented with different levels of Tsara (P. lucens) and pigeon pea (C. cajan) leaves and concentrate mixture.

The study was conducted at Shire-Maitsebri Agricultural Research Center (SMARC), Tselemti Woreda, North Western zone of Tigray Regional State, Ethiopia. The Woreda is located 405 km far to the North West of Mekelle, the capital of the region, 85 km far to the South of Shire along the Gondar way and 1172 km far from Addis Ababa, capital of Ethiopia. Elevation ranges from 800 to 2870 m above sea level (masl). Its geographical location is 13° 05’ N latitude and 38° 08’ E longitude. The average annual rainfall in the area is 758 to 1100 mm, with mono modal pattern falling from June to September. The annual temperature ranges from 16 to 38°C.

Experimental animals and their management

Begait sheep breed was used for the experiment. Twenty five yearling intact local male sheep with average live body weight of 24.2±1.1 kg (mean±SD) were purchased from Shiraro local market. The age of the animals was determined by dentition and by asking information from the owners. The sheep were quarantined for 21 days in the experimental area. During this quarantine period, they were dewormed and sprayed against internal and external parasites, respectively, and vaccinated against ovine pasteruolosis and anthrax.

The DM and CP contents obtained from laboratory analysis were 95 and 16.67% for Tsara; 95.5 and 20.74% for pigeon pea, 96 and 16.41% for rice bran and 95.5 and 39.55% for sesame seed cake on DM basis, respectively. According to the laboratory result, the 300 g DM concentrate mixture (75% rice bran and 25% sesame seed cake) supplied 66.60 g/day CP on dry matter basis. To supply the same amount of CP from the other feed treatments on iso-nitrogenous basis 400 g DM Tsara, 320 g DM pigeon pea and 360 g DM (200 g DM Tsara + 160 g DM pigeon pea) leaves were required for the experimental sheep in T2, T3 and T4, respectively (Table 1). Therefore, treatments were no supplentation to a hay diet fed ad libitum (T1) or hay supplementation with Tsara leaf (T2), pigeon pea leaf (T3), 50:50 combination of Tsara and pigeon pea (T4), and concentrate mixture (T5). Drinking water and common salt block were freely available to all experimental sheep throughout the experimental period.

At the end of the digestibility trial, all sheep were allowed to fast overnight before slaughtering, weighed to determine slaughter weight (SW) and then slaughtered by severing the jugular vein and carotid arteries with a knife for carcass evaluation. On slaughtering, the blood was collected in a container, weighed and recorded. The skin was carefully flayed to avoid attachment of fat and muscle tissues to the skin and then weighed without feet and the feet below fetlock joints was weighed and recorded separately. The entire gastrointestinal tract (GIT) except esophagus was removed with its contents and weighed with and without its contents and the weight of the gut fill (content) was measured by difference.

The rib-eye muscle area (REMA) which indicates the amount of valuable muscle in the carcass was allowed to chill for 12 h in a refrigerator for proper cutting. The cross sectional area of rib-eye muscle at the 11 and 12th ribs of each slaughtered sheep was traced from each side on transparency paper after cutting perpendicular to the backbone and measured by tracing the transparency paper on graph papers. The average measure of the left and right REMA was taken.

The model used for data analysis was:

Conversely, Hunegnaw and berhan (2016) reported significantly higher carcass yield and dressing percentage of Wollo sheep when fed grass hay and supplemented with legume forage leaf meal as compared to those that supplemented with concentrate. This might be due to the fact that supplementation induced higher total dry matter intake and digestibility of nutrients, consequently, this leads to greater nutrient availability that promote weight gain and tissue development (Mushi et al., 2009). In addition, Pralomokarn et al. (1995) indicated that carcass characteristics of animals increased as total dry matter and nutrient intake increased.

Dressing percentage on slaughter weight basis ranges from 35 to 46% in this study, which was comparable with the results of 32 to 44% for Farta sheep, local sheep and Horro rams reported by different studies (Zemicael and Solomon, 2009; Aschalew and Getachew, 2013; Chala et al., 2014). On the other hand, lower results for Tigray Highland sheep (Micheale and Yaynshet, 2014) and higher values local sheep, African dwarf sheep and growing Najidi lambs of Saudi Arabia (AL-Saiday et al., 2010; Fasae et al., 2011; Hagos, 2014) for dressing percentage as compared to that obtained in the current study has been reported.

The rib eye muscle area was in the order of T5 > T2 > T3 > T1, while values for T4 was similar with T3 and T1. The values for REMA which is an indicator of muscling and lean meat production in the current study was in line with the findings of Gebreslassie (2012), higher than the findings reported by weldegebriel et al. (2014), Gebretnsae (2011), Hagos (2011), and Hagos (2014) and was lower than the findings reported by Mulu (2005) for different breeds of sheep.

Supplementation had a positive effect on the total edible offals as compared to the control diet, and value were in the order  of  T2  >  T5  >  T3 > T4 > T1 (Table 3). The average head, heart, testes, liver with bile, internal fat, reticulo-rumen and omaso-abomasum weight in the control diet in this study was significantly lower (P<0.001) than the supplemented groups. Increments in total edible offal associated with supplementation has also been reported before (Hirut, 2008; Gebretnsae, 2011; Gebreslassie, 2012) for Hararghe highland sheep, Tigray highland sheep and Tigray local sheep. Liver weight was higher in the supplemented than non-supplemented sheep, possibly due to glycogen deposition as an energy reserve. Similarly, the higher weights of reticulo-rumen, omaso-abomasum and large and small intestine in the supplemented Begait sheep in this study might be in agreement with the fact reported by Burrin et al. (1990) that the level of feed intake changes the relative proportion of visceral organs to body mass. 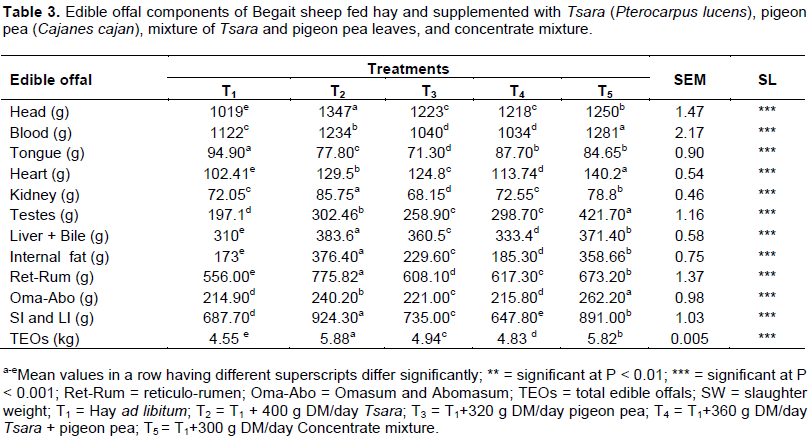 The non-edible offal components were all variable among treatments (P < 0.05), although there was lack of apparent trend (Table 4). One obvious trend is the high gut content in T1 which was statistically similar with T3 and T4. This observation is consistent with the greater hay intake in T1 which is less digestible in the non-supplemented sheep, and the relatively lower digestibility of the diet in T3 and T4 probably associated with the greater CT content of pigeon pea that might have deterred ruminal digestibility of nutrients and increased ruminal retention time (Bonsi et al., 1995). Total non-edible offal components were, however similar among treatments.

Based on the biological performance results, supplementation of concentrate mixture (T5) and Tsara (P. lucens)  leaf  (T2)  induced a comparable response on the valuable carcass parameters and were better than the supplemental regimes that contained pigeon pea and are therefore recommended for Begait sheep reared by small holder farmers and investors

The authors express their special  appreciation  to  Tigray Agricultural Research Institute (TARI) for covering the research fund and are also grateful to all staff members of Shire-Maitsebri Agricultural Research Center for their unreserved cooperation during collection of the experimental feeds and trial period.