Moringa plant is a plant with increase awareness of its health and nutritional benefits in Nigeria. This study was conducted to examine the nutrient composition of underutilized hull of Moringa oleifera seed. Proximate composition, antinutrients, minerals and vitamins profile of the hull were determined using standard analytical methods. The hull contained crude protein 5.25±0.011%, crude fibre 19.5±0.038%, ash 5.0±0.026%, crude lipid 4.25±0.011%, carbohydrate 55.2±0.062 and moisture content of 10.8±0.033%. Sodium (45.49 mg/100 g) and potassium (24.52 mg/100 g) were the most abundant minerals with appreciable amount of vitamin E and beta-carotene. Alkaloid (0.25%), saponin (10%), oxalate (0.015 mg/100 g) and phytate (0.487 mg/100 g) were found in the hull. It was therefore concluded that the findings of M. oleifera seed hull contain nutritive values that may necessitate its usage in alternative feed formulation instead of just remaining an agro waste.

Moringa oleifera is a widely cultivated medium sized tree species that originated from Northwest India. It is a fast growing aesthetically appealing tree characterised by long, drumstick shaped pods that contain about five to seven seeds within its first year of growth (Aja et al., 2013). Moringa tree grows in humid or hot dry lands and well adapted in less fertile soils and drought affected areas. In Nigeria, there is increasing awareness of the health and nutritional benefits of different parts of Moringa plant and government at various levels are now supporting the growth of this important tree  (Bello  et  al., 2015).

The seed is composed of edible inner part covered with a round shaped semi permeable hull with whitish wings that run from top to bottom at an interval of 120°C. The seeds can be grounded into powder when dried and used as food or other purposes (Anjorin et al., 2010; Quattrochi, 1999).

This work therefore aims at assessing the proximate composition, mineral and vitamin content and antinutrients of M.  oleifera seed hull.

Pods were collected from M. oleifera plantation in National Research Institute for Chemical Technology, Zaria. The hulls were removed from the seeds, dried at room temperature and then ground to a powder using mechanical grinder.

Determination of minerals and vitamin contents

Titrimetric method of Munro and Bassir (1969) was used with slight modification. Exactly 75 cm3 of 1.5 M H2SO4 was added to 1 g of the ground samples and the solution was carefully stirred intermittently with a magnetic stirrer for about 60 min and filtered. Then, 25 cm3 of the filtrate was collected and titrated against hot (90°C) 0.1 M KMnO4 solution until a faint pink colour that persisted for 30 s appeared. This was repeated two more times and the concentration of oxalate in each sample was obtained from the calculation: 1 cm3 of 0.1 M KMnO4 is equivalent to 0.006303 g Oxalate.

Saponin was determined using the method reported by Ejikeme et al. (2014) and Obadoni and Ochuko (2002). Exactly 100 cm3 of 20% C2H5OH(aq) was added to 5 g of each powder sample in a 250 cm3 conical flask. The mixture was heated over a hot water-bath (55°C) for 4 h with continuous stirring. The residue of the mixture was re-extracted with another 100 cm3 of 20% C2H5OH(aq) after filtration and heated at 55°C for 4 h stirring. The combined extract was evaporated to 40 cm3 over water-bath at 90°C, where 20 cm3 of diethyl ether was added to the concentrate in a 250 cm3 separator funnel and vigorously agitated from which the aqueous layer was recovered while the ether layer was discarded. This purification process was repeated twice, as 60 cm3 of n-butanol was added and extracted twice with 10 cm3 of 5% NaCl. After discarding the NaCl layer, the remaining solution was heated in a water bath for 30 min, after which the solution was transferred into a crucible and was dried in an oven to a constant weight.

Phytic acid was determined using the procedure described by Haug and Lantzsch (1983). A portion (2 g) of each sample was weighed into 250 cm3 conical flask; 100 cm3 of 2% concentrated HCl was used to soak each sample for 3 h. The mixture was then filtered and 50 cm3 of each filtrate was placed in 250 cm3 beaker, where 107 cm3 of distilled water was added to each solution and titrated with standard FeCl2 (aq) which contained 0.00195 iron per cm3.

The method reported by Ijarotimi et al. (2013) was adopted to determine the alkaloid content of the M. oleifera seed hull. Exactly 5 g of the sample was dispersed in acetic and ethanol (1:10) solution. The mixture was left for about 4 h at 28°C and filtered. The filtrate was evaporated and treated with concentrated NH4OH(aq) drop wise to precipitate alkaloid. It was then washed in a pre-weighed filter paper and dried at 80°C in an oven and estimated.

All the analysis was carried out in triplicates and results expressed as mean ± standard error mean. 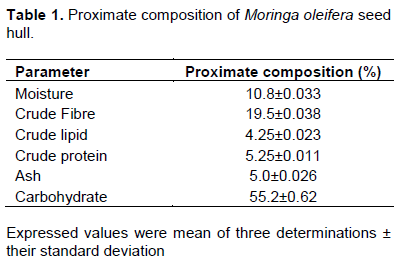 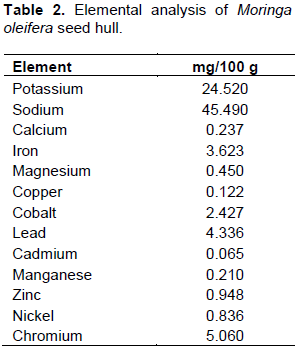 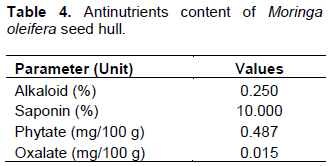 The crude fibre content of M. oleifera seed hull from this study is higher than 5.03±0.07% for M. oleifera seed reported by Ijarotimi et al. (2013), 11.40% and 15.34% in Garcinia kola seeds and its hull, respectively (Eleyinmi et al., 2006) but lower than  83.22%  in  Annona  diversifolia seed hull (Cuevas-Sanchez et al., 2011). The obtained value of crude fibre from this study is significant considering its possible health implication in the gastrointestinal tract of the animals (Bolanle et al., 2014). The carbohydrate and the crude fibre contents for instance may allow the hull to be used as alternative ingredient in feed formulation where necessary, except for the poor crude protein content.

The mineral composition findings agree with the report by Ijarotimi et al. (2013) who asserted that the most abundant mineral in raw M. oleifera seed was sodium (295.10±0.10 mg/100 g). Eleyinmi et al. (2006) also reported potassium as the most abundant mineral in G. kola seed hull. These two elements play a significant role in the nervous system and the regulation of pH and osmotic balance of fluids in the body. Iron (3.623 mg/100 g) was also detected in this hull, which is essential in the production of haemoglobin and as a critical cofactor in some metabolic reactions in animals (Ejidike and Ajileye, 2007).

The most abundant vitamin in M. oleifera seed hull was vitamin E (46 mg/100 g). Meanwhile, vitamin C (8.17 mg/100 g) was reported the most abundant in Musa paradisiaca Bract (Adeolu and Enesi, 2013). Vitamin E, a fat soluble antioxidant interferes with the propagation of reactive oxygen species (free radicals) that are implicated in disease conditions related to oxidative stress such as deficiencies in vitamin E which may result in nerve problems due to poor conduction of electrical impulses as well as weakness, weight loss and scurvy in vitamin C. M. oleifera seed hull has higher vitamins content when compared with cassava, Magnifera indica and M. paradisiaca (Adeolu and Enesi, 2013; Fowomola, 2010; Okigbo, 1980). Vitamins are needed in micro quantities but essential for healthy living. Also, vitamins have been shown to be effective in the damage of nucleic acid in pathogen that is found in plasma and platelets (Bruijn et al., 2010; Ruane et al., 2004).

The antinutrients result is similar to the findings from the work of Bolanle et al. (2014) who reported the presence of phytate in the seed of M. oleifera at a significantly low concentration. Presence of antinutrients in the M. oleifera seed hull is very minimal as compared to 2.0 to 2.4% phytate in Cajanus cajan, Vigna ungiculata and Sphenostylis stenocarpa (Onwuka, 2006). Phytate and oxalate react with divalent minerals such as calcium and magnesium to form complexes thereby hindering absorption, thus slowing down digestion.

There have been many researches on M. oleifera plants over the last few years, but its seed hull has been somehow neglected as an agro waste. This study has shown that M. oleifera seed hull may be a cheaply available alternative source of livestock  feed  formulation to other costly feedstuff sources as a result of its satisfactory good nutritional qualities revealed from the data of this study. The satisfactory contents of crude fibre, carbohydrate, lipids, minerals and vitamins, as well as low antinutrients strengthen the implication that the seed hull may have positive health implication on animal if use for livestock feed formulation. Hence, further research is recommended on its nutritional evaluation to involve feeding tests and digestibility in animals for its inclusion in livestock feed formulation.