The study was conducted in Moretna Jiru district, North Shoa zones of Amhara Regional State of Ethiopia from February 2014 to January 2016 to assess fattening cattle marketing system. The primary and secondary data were collected through structured interview, focus group discussion and direct filed observation. Statistical package for social science (SPSS 16) were used to analyze data. In the study area, most respondents (94.8%) did not record cattle history but 75% of respondents have recorded their cost analysis. Producers, traders and brokers were the main actors in fattened cattle marketing in the study area. Producers and brokers took the first and third rank respectively but brokers have a significant impact on bargaining. Traditionally, producers and traders invite the persons who made bargaining which is called “fintir”. This was done by contributing equal amount of money from (seller and buyer). Most (45.0%) respondents bought cattle from South Wollo district market and 66.7% respondents were sold at village market. Majority of respondents in the study area obtain marketing information from market visit and neighbors. The maximum and minimum price of fattened cattle in the study area in 2015 was 58,000 and 21,000 Ethiopian birr (2566 and 927 US dollars) respectively. Majority (98.3%) of the respondents reported the occurrence of market fluctuation in fattening cattle due to different reasons. Fasting was the main cause (42.4%) for market fluctuation. Most respondents traveled on foot to buy and sell fattened cattle. The major challenge to transport fattened cattle to and from market was found to be transportation facilities. All of the producers and brokers did not have any license on fattening cattle for marketing and only 5% of trader’s respondents had a license. This research was used to generate baseline information on fattened cattle market.

Ethiopia has a cattle population of about 53.4 million heads and the majority (99.26%) of them are local breeds, which are found in rural areas under  subsistence type of farming system (CSA, 2010/11). Despite the contribution of livestock to the economy and to smallholders’  livelihood,  the  production  system   is   not adequately market-oriented (Eyob and Zewudu, 2016). Livestock marketing operations are generally small-scale family businesses. The supply of livestock to the markets by producers is not based on market demand, rather the buyer chooses from whatever is available in the market. The live animals are either transported in trucks or herded over long distances to feedlot operators, export abattoirs, or major markets. The routes used lack adequate feed, water, and resting places. The final market destinations are far away from supply sources, and the inadequate transport system results in significant weight loss and even death of live animals.
In some cases repeat transactions are possible. However, there are no binding contractual arrangements among different market actors. Price is determined through bargaining at the market; livestock producers are usually less informed about price, supply, and demand situations. Suppliers (producers) are highly fragmented, while there is a concentration of major livestock buyers, a situation which might lead to noncompetitive pricing and marketing behavior (CSA, 2005).
There are several marketing channels through which cattle, sheep, and goats flow to final consumers in both the domestic and export markets. The livestock marketing channels, which start with the smallholder livestock producers from the mixed crop-livestock farming system, mainly cater to the domestic market. The marketing channel starting with the pastoralists is for both domestic and export markets. The market actors may only be involved in cattle, sheep and goats, or cattle, sheep, and goat transactions (Fekadu, 2006).
In Ethiopia, both legal and illegal marketing systems operate at different magnitudes. Most livestock sales are related to farm households, cash needs and commercial orientation. However, cattle sales are also induced by fear of theft and insecurity. The current knowledge on livestock market structure, performance and price is poor and inadequate for designing policies and institutions to overcome the problems in the marketing system. In addition, the current knowledge on marketing orientation of livestock in the study area is also poor with a lack of scientific information. Based on the above information, the current study was conducted to assess the marketing of fattened cattle in Moretna Jiru district, North Shoa zone in Ethiopia. In this area oxen, mainly used for drought power are put into feedlots for a certain period of time so as to improve their body condition. Afterwards the oxen are moved to the nearby market and sold at higher price as demonstrated by the farmers that kept oxen under traditional feedlot conditions for 1- 2 years and ultimately sold them for 45-55 thousand in Ethiopian birr (2566 and 927 US dollar). This study helps to improve the supply  of quality fattened animals to the market and aims at improving the marketing systems of fattened cattle so that the buyers and sellers can directly meet.

Description of the study area
The study was conducted in Amhara Regional State, North Shoa zone of Moretna Jiru district over a period of 23 months (from February 2014 to January 2016). The coordinates for the study area are 39° 19’ 24’’ E and 10° 6’ 2’’N. The area located 195 km North East of Addis Abeba with an altitude ranges from 1,500 t0 2694 m above sea level and receives an annual rainfall of 850 mm while the temperature varies from 5.2°C in November to 28.8°C in June.
Sources and method of data collection
The study was conducted based on both primary and secondary data sources. Primary data was collected through face to face interviews, personal observation and informal discussion with producers, traders and brokers. The sources of secondary information were from districts and zonal agricultural and trade offices. Questionnaire survey was conducted on 90 households. The households were identified by using a systematic random sampling technique. The cattle marketing site was chosen based on the ability to provide a high supply of cattle to domestic trade and the availability of a weighing scale facility for ease of transaction. In all the markets, the market survey was carried out once a week on a major market day.
Data analysis
The qualitative and quantitative data sets were recorded and entered in to statistical package for social science (SPSS version16) computer program for analysis. Descriptive analysis was employed for data analysis. This method of data analysis refers to the use of ratios, figures, percentages, means and charts in the process of examining and describing marketing functions, facilities, services, intermediaries, and market and cattle characteristics.

Financial and animal recording practice
In the study area, most respondents (94.8%) did not have records of cattle history during fattening period. The health status, body condition, cattle breed and other cattle information were not recorded before and after fattening. The result also revealed that most respondents (75%) have financial records but the financial record did not include the cost of labor and crop residues. According to the respondents, there was a nearby market to sell and buy fattened cattle though the price was fluctuating (Table 2). 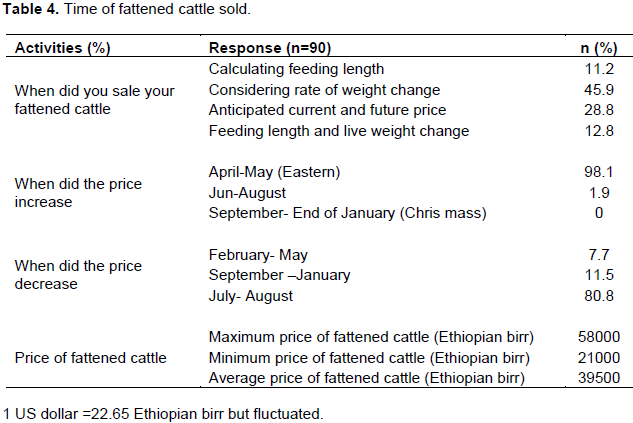 Marketing alternatives of fattened cattle
Markets and marketing system of fattened cattle are the dominant sources of risk in the production units of farmers (insert reference to qualify this statement). Most respondents (69%) in Moretna Jiru sold and bought fattened cattle at the regular market (Table 5). Comparable result was reported by Mlote et al. (2013) who reported about 58.7% of the fattened beef cattle were sold at Pugu Secondary Market in Dares Salaam.

Major actors in fattening cattle marketing system
Producers, traders and brokers were  the  main  actors  in fattened cattle marketing systems.  Producers were ranked first followed by traders even if brokers have significant role in connecting both the buyers and sellers via bargaining (Figure 1). This result was in agreement to Shewangizaw et al. (2014). According to the focus group discussions, the price of fattened cattle was determined by the bargaining of producers and traders but traders take the first rank. The marketing root passes producer, trader, butcher and consumer respectively. These long marketing roots influence producer’s interms of fattened cattle price. Therefore, farmers require best alternatives to minimize and avoid this unprofitable transaction in the chain and ensure fair and legitimate marketing system (Tsegay and Mengistu, 2013). Variations in type of markets and customers also influence profit gain from fattened cattle (Habtamu, 2012). 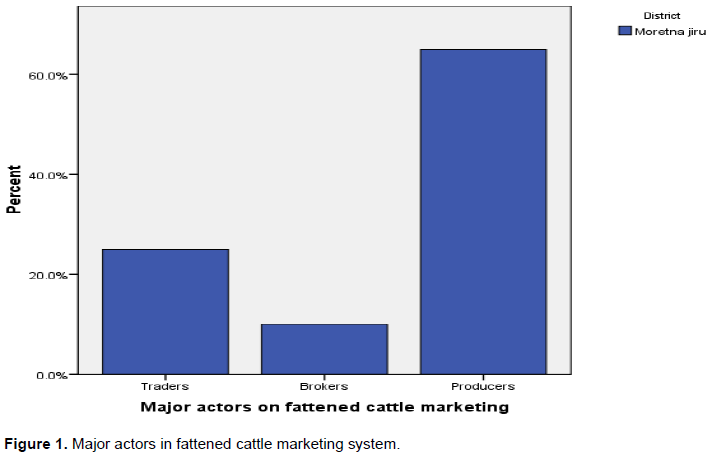 Source of market information in the study areas
Fattened cattle producers obtain different market information from market visit, neighbors, extension agents, cooperatives, traders and  brokers.  According  to the result reported in Figure 2, majority of respondents in the study area get marketing information from market visit and neighbors. In livestock marketing system, information is held as a private property and not equally shared among the different participants in the value chain and usually lacks trickledown effect. 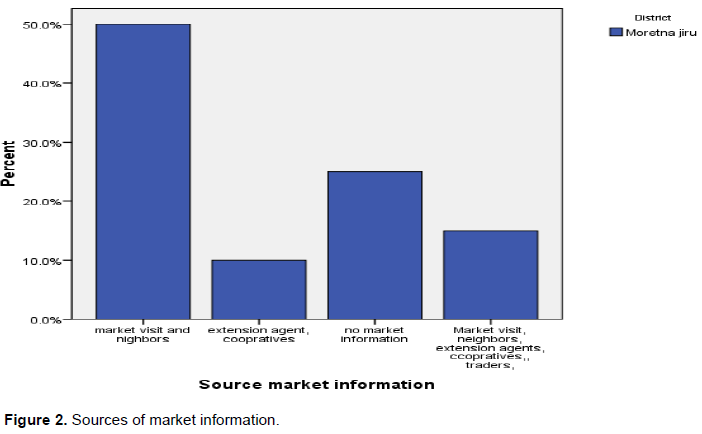 Marketing place/area
In the study area, fattened cattle marking took place in an open area (Figure 3). The marketing place did not have any shade and fence but it has a boundary between other livestock. The boundary did not have any fence and mark.
Even though the area has not fences those livestock species have not mixed together in the study area. Incomparable result was reported by Shitahun (2009) who reported marketing of fattening cattle and other cattle took place at the same open area by mixing together.

Licensing
All producers did not have any license to buy and sell fattened cattle but a few (5%) traders had a license. In the study area, all brokers did not have any license to negotiate buyers and sellers but they have a deceive role on fattened cattle marketing systems (Table 9). The same result was reported by Habtamu (2012) who reported no farmer had a license to export cattle, but 550 cattle were exported directly by farmers themselves. 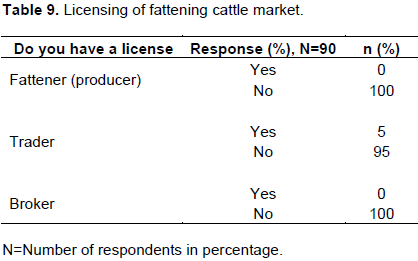 The results of the study concluded that marketing of fattening cattle in the study area was fluctuated due to different reasons. All most all marketing actors did not have license to buy and sell fattened cattle. Cattle marketing and market related things are a crucial problem. Producers do not benefit from their fattened cattle because of lack of fair selling price, broker interference and also lack of fencing at the market place in the studied area. So promotion of livestock marketing study will solve the problem and bringing all actors along value chain will improve the market access for optimum benefit of each actors. Establishing cattle market information center plays a vital role in getting the current market price. On the other hand, the fatteners should be able to have an open access to micro finance institution that   empowers    them    having    credit    system.    The government should put the marketing guidelines on fattened cattle with the current scientific knowledge in order to enhance the sector for its contribution to household income generation activities.