Is there a relationship between occult celiac disease and functional dyspepsia?

Celiac disease (CD) is an immune-mediated systemic disorder elicited by gluten and related prolamins ingestion in genetically susceptible individuals and characterized by atrophy of the proximal small  intestinal  villi,  presence of a variable combination of gluten-dependent clinical manifestations and celiac disease specific antibodies (Abadie et al., 2011).
It has been considered for years to be a rare  pathology that affects, in particular, pediatric patients who present with a clinical picture of malabsorption. During the past years, researches have shown that the prevalence of celiac disease has increased dramatically, especially with the development of sensitive and specific serological tests and their administration to subjects who are apparently healthy (Corazza and Villanacci, 2005). CD is still under diagnosed in all age groups and the form with clear symptoms is found in a limited number of cases; in most patients, the disease has atypical symptoms or completely asymptomatic (Gujral et al., 2012).
CD is reported to be associated with many functional gastrointestinal tract (GIT) disorders especially in its occult form; so many studies discussed the prevalence of CD in such functional disorders such as irritable bowel syndrome and functional dyspepsia. In comparison with the general population, it was observed that CD had a greater prevalence in dyspeptic patients and that 30 to 40% of CD patients have dyspeptic symptoms. These findings suggested that it would be useful to carry out, in subjects undergoing esophago-gastro-duodenoscopy (EGD), biopsies of the descending duodenum independently of the endoscopic aspect of the mucosa (Keshavarz et al., 2010).
Until the year 2000, CD was almost unknown in Egypt, to the authors’ knowledge, few data are available on its prevalence in Egypt and the relationship between dyspepsia and CD. The diagnosis of celiac disease is based on demonstrating characteristic villous abnormality of duodenal biopsy together with positive celiac serology. Among the serological tests, endomysial antibody (EMA) and anti-tissuetransglutaminase antibodies (anti-tTG-IgA or IgG) are commonly used (Gujral et al., 2012).
Tissue transglutaminase is an intracellular enzyme present in many tissues. It has been found that it is not only increased in patients with celiac disease but also correlated with duodenal histology and confirmed that this enzyme is a target in the autoimmune process of celiac disease (Rahmati et al., 2014).

The study was carried out on 400 patients complaining of dyspepsia and attending the Gastroenterology Unit of Endemic Diseases and Internal Medicine Departments, Minia University Hospital, Egypt. Patients already diagnosed with CD, with family history of celiac disease, with inflammatory bowel disease or irritable bowel syndrome, diarrhea or malabsorption, significant weight loss, any organ failure or refusing to be entitled in the study were excluded.
All patients were subjected to written informed consent before participation in the study, full history taking, clinical examination and underwent EGD using Pentax EPM-5000 after using the standard technique. Patients with endoscopic findings explaining their dyspeptic symptoms were also excluded from the study while patients with no endoscopic findings explaining their dyspeptic symptoms were diagnosed as functional dyspepsia according to Rome III criteria (Jung, 2011).
Duodenal biopsies were obtained by UGI endoscopy  from  those patients with functional dyspepsia. 3-5 biopsies were taken from the distal duodenum and sent for histopathological examination according to "Marsh" Criteria for diagnosis of CD as follows:
Stage 0: Preinfiltrative mucosa (small-intestinal biopsy specimens that appear normal).
Stage 1: Increase in the number of intraepithelial lymphocytes (IELs) to more than 30 per 100 enterocytes.
Stage 2: Crypt hyperplasia: In addition to the increased IELs, there is an increase in crypt depth without a reduction in villus height.
Stage 3: Villous atrophy: A, partial; B, subtotal; C, total. This is the classic celiac lesion.
Despite marked mucosal changes, many individuals are asymptomatic and therefore classified as having occult or silent cases. This lesion is characteristic, but not diagnostic, of celiac disease and can also be seen with severe giardiasis, infantile food sensitivities, graft-versus-host disease, chronic ischemia of the small intestine, tropical sprue, immunoglobulin deficiencies, and other immune deficiencies and allograft rejection.
Serum tissue transglutaminase IgA antibody (anti-tTG-IgA) was measured for patients with histopathological findings suggestive to have CD (subtotal and total villous atrophy). It was measured using the ELiA Celikey IgA kit (Phadia AB, Uppsala, Sweden). As recommended by the manufacturer, levels greater than 10 U/mL were considered positive.
Statistical analysis
The Statistical Package for Social Science (SPSS), version 20, was used for the statistical analysis. Simple statistics such as frequency, mean and standard deviation (SD) were used. Also, Chi-square, t-test was used for comparison. The results were considered statistically significant when the P values were<0.05. 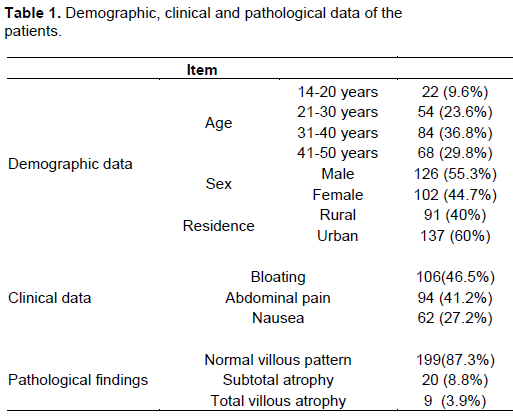 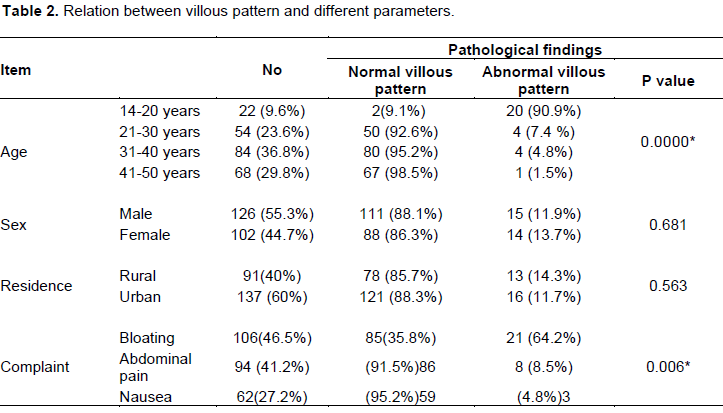 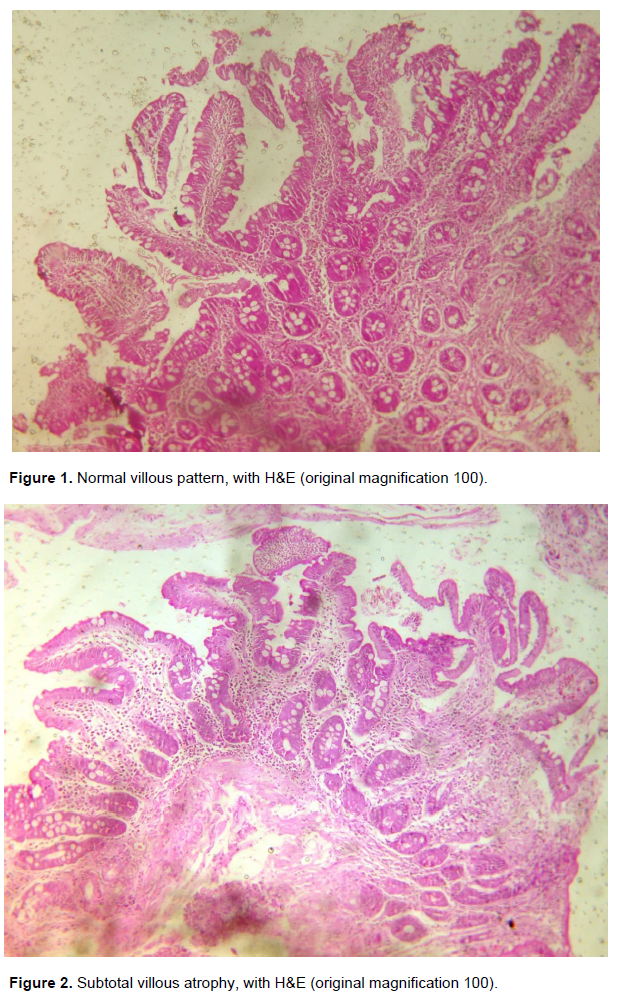 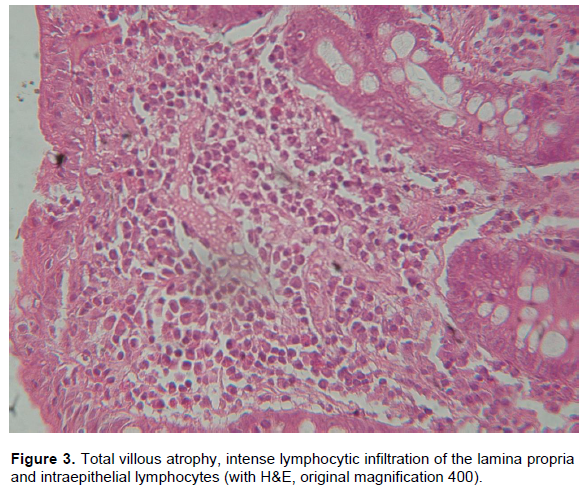 In conclusion, based on the results obtained, it can be hypothesized that for patients who have been diagnosed as having functional dyspepsia with normal upper GIT endoscopic findings, endoscopic examination should be completed with duodenal biopsies and histopathological examination of the biopsies taken to exclude any degree of villous atrophy and the presence of occult celiac disease. Particular attention should be given to patients with high tissue transglutaminase level especially at the age group of 14 to 20 years and the presence of bloating as a predominant dyspeptic symptom. Such an approach could reveal another submerged part of the "Celiac Icberg" but it must be validated as regards the cost effectiveness, bearing in mind the variable prevalence of the disease in the different geographical areas.
A combination of clinical presentation, histology and serology would contribute to making a more accurate diagnosis.