In Embu County, pregnant mothers begin attending antenatal care (ANC) clinics late in third trimester. According to World Health Organization (WHO) guidelines, pregnant mothers should start their ANC in the first trimester before sixteen weeks of gestation. The study sought to determine factors associated with late booking of the visits. The specific objective were to find out how past pregnancy experience, accessibility of health facilities and awareness on ANC bookings influence ANC booking among pregnant women attending Maternal Child Health (MCH) clinic in Embu County. The results of the study were aimed at promoting ANC initiation within the first trimester of pregnancy. The recommended ANC model helps minimize complications that occur during pregnancy, during labor and during postpartum period through early screening, diagnosis and treatment of infections. A descriptive cross-sectional study design was used to collect data. Most of the clients were aware of the booking time and despite this none turned up for ANC clinic within the right gestational age. Accessibility of health facilities and past pregnancy experience was significantly associated with initiation of ANC booking.

Antenatal care (ANC) is one of the four pillars for safe motherhood. The main objectives of focused antenatal care include: promotion of health, prevention of diseases, early detection of diseases and their management and complication readiness and birth preparedness (Kondale et al, 2016).

Focused antenatal care has been recommended by the WHO, to help pregnant mothers get screened early for conditions that may affect the outcome of pregnancy. As a result of increased maternal deaths the WHO has come up with new guidelines on ANC visits whereby the pregnant women will have increased access to health care and these include first visit within 12 weeks, then at 20 weeks, 26, 30 34, 36, 38 and 40 weeks gestation. During these visits, the pregnant woman should be counseled on nutrition, malaria and HIV prevention, blood tests and tetanus toxoid (TT) vaccination, ultrasound services and provided with advice on how to deal with minor disorders in pregnancy (WHO, 2017).

It is recommended that pregnant women should attend a minimum of 4 comprehensive antenatal clinics. First visit should be at less than 16 weeks, second visit at 16-28 weeks, third visit at 28-32 weeks, and fourth visit at 36-40 weeks (Njoroge, 2012). Despite the recommended gestation of a pregnant woman to attend antenatal care booking visit, a significant proportion of pregnant women in developing countries attend booking visit after the first trimester (first 3 months) (Ouendo, 2015).

Globally, 82.6% of pregnant women attend antenatal care booking visit during the second and third trimester of pregnancy. This late antenatal care booking attendance lead to approximately 515,000 deaths every year as a result of complications related to pregnancy and childbirth (Erin, 2014). This was supported by another survey done in Ethiopia, which revealed complications of pregnancy are the leading causes of pregnant women deaths, where by it was found that 385,000 women usually die due to complications that occur during pregnancy and childbirth (Tolera, 2015). Majority of the maternal deaths (99%) occur in developing countries while more than half deaths usually occur in sub Saharan Africa. These findings were similar to another survey done in sub Saharan Africa, which indicated that most women attend antenatal care booking visit after the first three months of pregnancy (Christopher, 2013).

Several examinations and tests are usually carried out during antenatal care booking visit and they include screening for HIV infection and this helps in detection and prevention of mother to child transmission, screening for syphilis is also done and treatment given to the affected, provision of iron and folic acid supplements (IFAS) which helps to reduce risk of congenital malformations such as neural tube defect (Tolera, 2015). Pregnant women from malaria endemic areas receive treated mosquito nets and intermittent preventive therapy (IPTs). TT immunization is also given during pregnancy which helps to prevent mother from tetanus and the protection is also passed to the baby (Ouendo, 2015). During antenatal care booking visit, the first health assessment is done which includes weight, height, body mass index (BMI) calculation, blood pressure, blood and urine are assessed (Ayneh, 2015). In Pakistan, it was revealed during a study on timing of antenatal care initiation that the time a pregnant mother initiated the antenatal care clinics determined the quality and range of services to be received (Agha and Tappis, 2016).

On a study done in Nigeria on barriers to antenatal care attendance it was found out that infrastructure to access the health facilities was a problem, in the same report for those who accessed the facilities they were unable to afford the services. In other health facilities the services were unavailable (Fagbamigbe and Idemudia, 2015). In another study in Nigeria, it was revealed that past pregnancy experience, mothers’ health status in the present pregnancy and ignorance  on  when  to  start  the antenatal care clinics contributed to late booking for antenatal care for pregnant mothers in selected hospitals (Nwaneri et al., 2018). Long waiting time and accessibility of the antenatal care services was cited as barriers to initiation of antenatal clinics among pregnant women in East London (Hatherall et al., 2016).

In Kenya, a study on men’s perspectives on antenatal and delivery services, men were seen to facilitate utilization of antenatal care but that rarely translate to practice. Most of the men do not accompany their spouses to the clinics (Kwambai et al., 2013). In another study, pregnant women in Kenya were reported to initiate antenatal care clinics in the second and third trimesters compared to other countries which were under study (Bucher et al., 2015). Mothers feared to be reprimanded by health care providers, others cited mistimed conception, experience of previous pregnancy especially those who suffered complications motivated the pregnant mothers to initiate antenatal clinics early. Unmarried pregnant women hide their pregnancy and attended antenatal clinic later in pregnancy for fear of being known to be pregnant while the married and multipara women reported to initiate the antenatal clinics depending on previous pregnancy experience (Pell et al., 2013).

Long waiting times and staffs attitude were cited as barriers to attendance of antenatal clinics in the study on barriers and facilitators to antenatal and delivery care in Western Kenya. In the same study fear of knowing ones’ HIV status early in pregnancy also deterred some women from attending antenatal clinics early (Mason et al., 2015). Ochako and Gichuhi (2016) found out that in Kenya, the wantedness and timing of the antenatal care clinics initiation depended on each other. The pregnant mothers who wanted the pregnancy were found to attend all the clinics as scheduled while those who had mistimed pregnancy or unwanted pregnancy were rarely seen to attend the clinics (Ochako and Gichuhi, 2016). Increase in age and the fact that the pregnant women are married increased utilization of antenatal care among these mothers in Malasyan setting (Yeoh et al., 2016).

A cross sectional descriptive study was done in Embu County, targeting pregnant women attending antenatal care clinics. The study involved 110 respondents randomly sampled from Kianjokoma, Kibugu and Kirititri health facilities, in Embu County. During a preliminary survey done in the three hospitals in Embu County, Kenya, it was evident from ministry of health registers that majority of the mothers report to book for ANC visits in the third trimester. This predisposes them to late screening, diagnosis and treatment of preventable conditions which affect the pregnancy outcome. Reliability and content validity were established before actual data collection during pretesting. Research assistants were trained before administering the questionnaires to the mothers. Ethical clearance was sought from National Commission of Science, Technology and Innovation, Kenya and from Embu County Department of Health, Health Facility Administrators. Informed  consent  was  obtained   from   the   respondents   before participation in the study and confidentiality of the data collected maintained.

The ages of the participants ranged from 19 to 49 years of age, with a majority of them (58.2%) in the age bracket of 20 to 30 years. Majority of the pregnant mothers were Christians and married (91.8 and 82.7%), respectively. On employment status, most mothers were either self-employed or house wives, with a majority having secondary level of education. The summary of the demographic characteristics of the pregnant mothers who participated in the study is as shown in Figure 1. 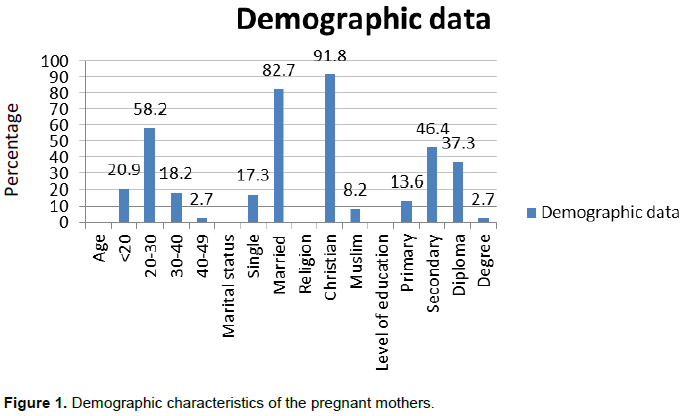 The age of the participants was not significantly associated with booking for antenatal care clinic (p ≥0.05). However, older pregnant mothers were reported to be free to initiate their antenatal clinics at any gestation while the young mothers tend to initiate their clinic at second or third trimester. Religion of the participant was also less likely to influence the timing for initiating antenatal care clinics. Majority of the participants initiated their clinics in the second and third trimester regardless of their employment status, house wives mostly initiated the clinics early compared to the employed mothers. However, this was not significantly associated with the timing to initiate antenatal clinics (p≥0.05, c2= 4.241).

Out of 15 mothers who had primary education, 13 of them initiated their antenatal clinics after six months of gestation. Only three mothers had a degree level of education and they booked their clinic late in the third trimester. It was also revealed that 46.4% of the respondents had a secondary level of education and initiated their clinics in the second and third trimesters. During multiple regression, level of education had a positive association with employment status and been previously pregnant. When these two variables were adjusted and subjected to Chi-square analysis for time of initiating antenatal clinics, it was evident that the association was insignificant (p≥0.05).

Majority of the mothers were married with 17.3% of the participants being single. There was a positive association between being married and having been pregnant previously. As the age of the participant increased there was also a positive correlation with the marital status many being married as they age. Despite the positive correlation, marital status was not significantly associated with initiation of antenatal clinics (p≥0.05).

Cost implications on initiation of antenatal clinics was evaluated and it was found out that out of 21 mothers who reported the services to be affordable, only 3 had booked their clinic in the first trimester. Majority of the respondents (80.9%) reported that the services were not affordable. Affordability of the services was positively correlated with level of education and employment status. However, it was evident that those mothers who initiated their clinics late in pregnancy had been employed; therefore, the cost of the services was not a determinant of the time to book for the clinic, and this was insignificant (p≥0.05).

In an African set up, men’s decision is perceived to influence the timing for the clinic attendance but was not the case in this study. Out of 85 pregnant mothers who were advised by their spouses to initiate their antenatal clinic in the second trimester, only 28 mothers initiated their clinics before the third trimester. When a Chi-square was computed, the spouse’s decision on when to initiate the antenatal clinic was not significantly associated with the timing for antenatal booking (p≥0.05). 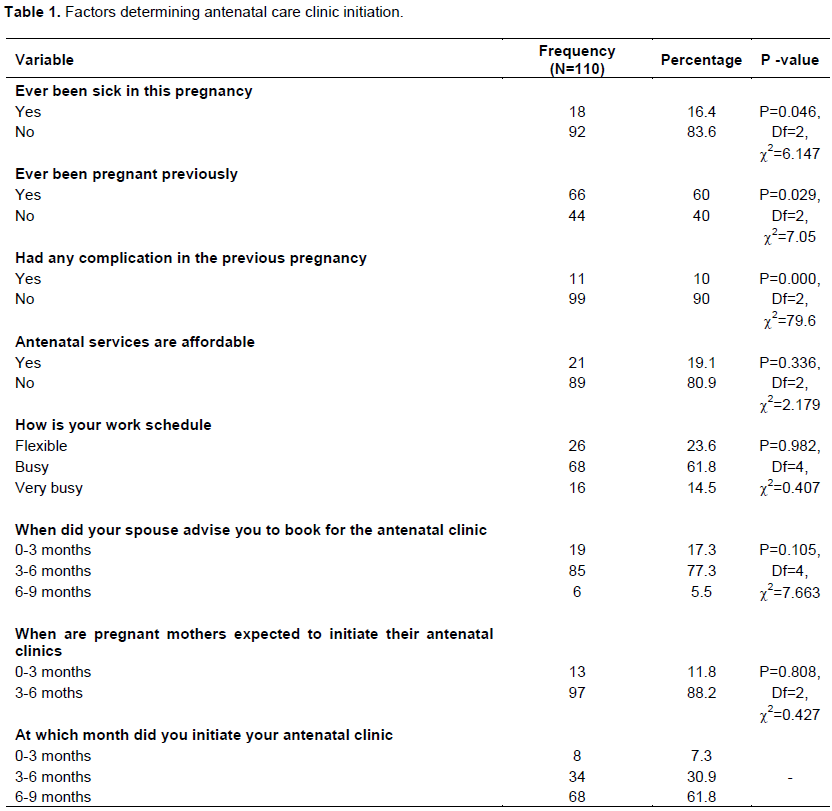 The results in this study revealed that the health status of the mother in the current pregnancy, past poor obstetric experiences and having been pregnant previously were the main determinants of antenatal care clinics initiation. These results are consistent with Nwaneri et al. (2018) who found out that past experience, health or illness of the mother and ignorance were determinants of late booking for antenatal care clinics. However, in this research ignorance was not a determining factor for antenatal booking since majority of the pregnant mothers were aware of when to initiate antenatal care booking but booked for the clinics at the right time.

The current health status of the pregnant mother and past obstetric outcomes are the key determinants of the timing for initiation of antenatal care booking. However, multiparty was associated with late antenatal booking.