However, the relatively low rate in low income countries, including most African countries, is on a steady rise. This, coupled with typical late diagnosis that worsens prognosis makes breast cancer an increasingly worrisome public health issue. In Nigeria, female breast cancer is recognized as major cause of morbidity and mortality with incidence rate ranging from 36.3 to 50.2/100,000 live birth (Said et al., 2017). More so, “Late presentation of patients at advanced stages when little or no benefit can be derived from any form of therapy is the hallmark of breast cancer.”  Reasons given include poverty, under-education, lack of knowledge and poor access to care, (Okobia et al., 2006). Indeed the ratio of mortality to incidence in Africa is 0.73, compared to below 0.23 in North America and 0.354 in Latin America and the Caribbeans (Komen et al., 2009).

Risk factors associated with breast cancer development include unmodifiable ones such as female sex, increasing age, a history of breast cancer in close relatives especially in mothers and siblings. Non-modifiable ones include early menarche before the age of 14 years or menopause later than the age of 55 years. Other risks include being overweight, using hormone replacement therapy, oral contraceptives, alcohol intake, nulliparity or having first child after age 35. Generally, literature have documented that an increased or prolonged oestrogenic exposure poses a risk.

Self-breast examination, encouraged for early detection of breast cancer in symptomatic women with significant risks factors, is reliable as a self-screening tool for early diagnosis (Demirkiran et al., 2007) but it does not decrease cancer mortality rate (Howard and Scott, 2006). A study conducted by Olugbenga-Bello et al. (2011) on “Awareness and breast cancer risk factors: perception and screening practices among females in a tertiary institution in Southwest Nigeria”, found, about two thirds (67.9%) of those who had heard of breast cancer knew that there were screening methods available. Of these, awareness of clinical breast examination led at 93.2%; breast self-examination was next with 91.6%, only a third 32.8% were aware of mammography as a screening method. Further,  about  half  of   respondents  who  were aware of breast cancer practice breast self-examination. Only 28 (7.6%) of the respondents had ever visited any clinic for breast cancer screening, and 85.7% (Gail et al., 2008) of the visit was for clinical breast examination while mammography was rarely done (14.3%) (Olugbenga et al., 2011). This study assessed and documented risk factors for development of Breast Cancer in Sub-Saharan Africa specifically localised to Osogbo, a city in South West Nigeria. Its target is to create awareness in susceptible patients for early detection and prompt treatment and to help redress the lack of risk factor information on risk factors for breast cancer development.


STATEMENT OF THE PROBLEM

Breast cancer is becoming an important health concern among middle aged women with its accompanied death in Osogbo. Going by the hospital-based record of the Ladoke Akintola University of Technology Teaching Hospital, Osogbo (LAUTECH), Osogbo, there were 165 cases of breast cancer between 2005 and 2014 in which all of them presented late to the hospital, which leads to high mortality. Many risk factors for breast cancer development have been identified in literature, but there is need to establish which of these risk factors are peculiar to this environment in the development of breast cancer. Meanwhile it is not impossible that those factors could be prevalent in this environment. Hence, using the standardized instrument, risk factors that are prevalent to this environment can be isolated.

The study employed a descriptive cross sectional design. A mixed method design was used. Quantitative data was collected with a standard instrument. The qualitative was conducted to supplement and strengthen the data collected from the quantitative.  The study provided information on the risk factors that were detected in women of child bearing age, the prevalence and the distribution of the risk factors according to level of risks factors were noted.

A purposive sampling technique was adopted to select participants in this study. The criteria for choosing the subjects are: women within child bearing range 19 to 44 years attending antenatal and child welfare clinics of some selected Primary Health Care Centres in Osogbo and Olorunda.  The procedures were as follows, women in Osogbo were selected according to their age range. The women were purposively selected to be between 19-44 years only. Women outside the inclusion criteria were not selected. The population of women of child bearing age projected from 2006 census to 2013 in Osogbo local government was 47,760, while that of Olorunda local government was 40,255 totaling 88,015 with age range between 15 and 44 years available in NPC file  (from the National Population Commission office, Osogbo). According to study on women Health by WHO, it put the reproductive age at (19-44years) and adult women at (20- 59 years) women (Health fact sheet No 334, updated September, 2013).

Sampling: Women of child bearing age that met the study inclusion criteria at the study site were included in the study.

The validity of the adapted and modified standard instrument (‘Short form breast Cancer Risk Questionnaire) was established through face and content validity criteria by my supervisor, co- supervisor and other experts in the field of Nursing research, ensuring that there were no ambiguities and that the content covered all relevant areas related to the information needed. The instrument was further cross-checked carefully to ensuring that there were no ambiguities, and necessary corrections effected.

The main ethical issues in this project were participant protection, confidentiality, and informed consent. This research did not pose risks of placing participants in physical danger or causing emotional/mental distress. All participants read, understood and signed a consent form that included the project aims, assurance of confidentiality. The study was approved by the Ethical review board of the Obafemi Awolowo University, Ile-Ife and Ethical clearance was obtained from the ethics and research committee, Institute of Public Health, Obafemi Awolowo University, Ile-Ife,  with  the  Ethics Committee assigned number; HREC NO- IPHOAU//12/259.

Only 3.5 and 0.8% of the respondents have had breast biopsy and mammogram done respectively. The study identified risk factors and documented their prevalence as follows: attaining menarche between 9-14 years of age (64.8%); having first child after age 30 years (12.5%); nulliparity (3.3%); history of never having breast feed (10.5%) and having had a breast biopsy done (3.5%). Others were- a history of breast cancer in a first-degree relation (mothers or sisters) (23.3%). 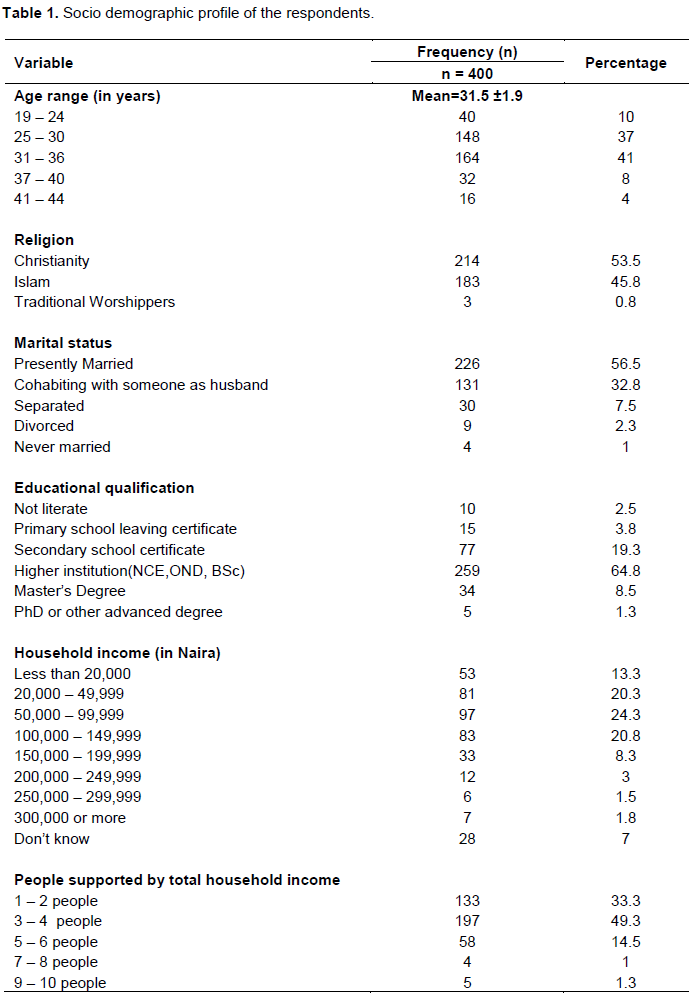 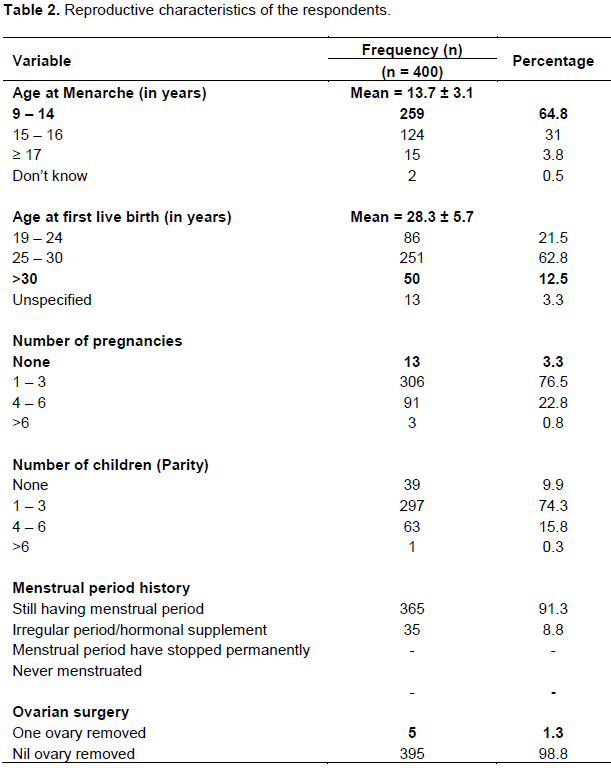 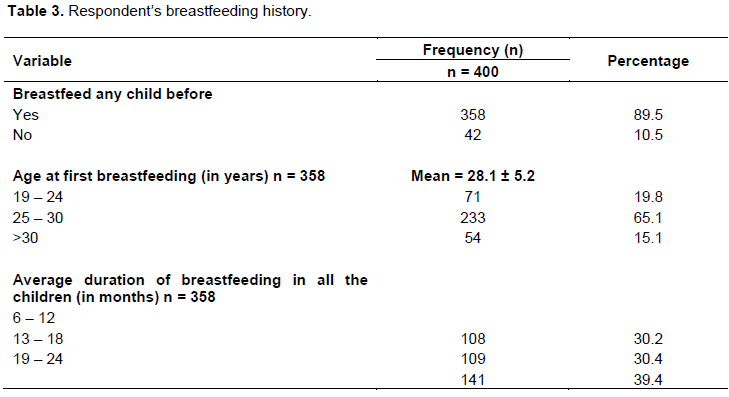 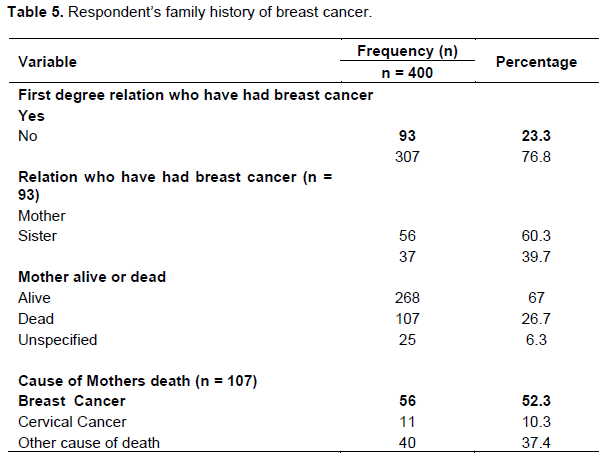 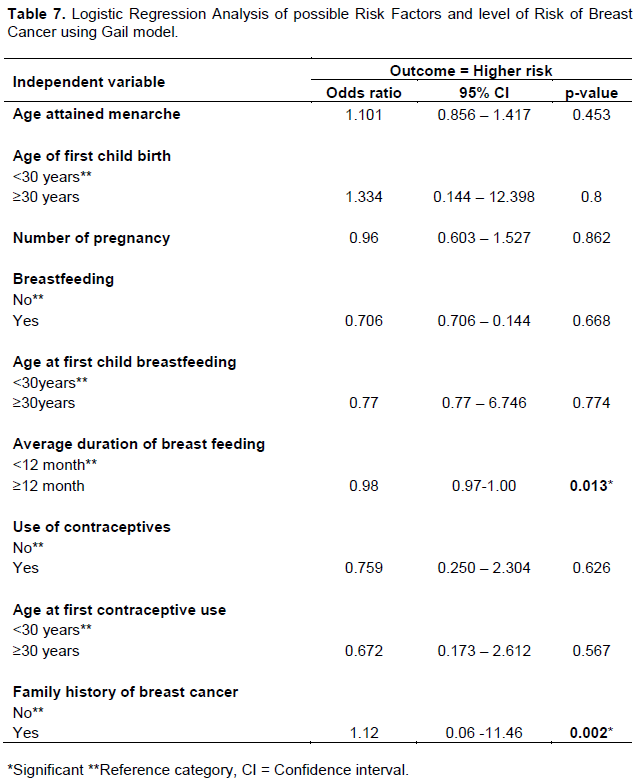 The study identified the risk factors associated with breast cancer development and determined its prevalence. It also described the distribution of the risk factors in the study population according to the level of risks (High, Average and Low). This was done with a view to documenting the prevalence of risk factors for breast cancer development among childbearing women. Breast cancer risk increases with age, with half of the women diagnosed annually (2006-2010) being aged 61 and over (Chu et al., 2012). The level of risk is also related to a female’s reproductive history. An early menarche  (first period), late menopause, late first birth or nulliparity (never giving birth) all increase the risk of getting breast cancer. Breast feeding can have a protective effect. Breastfeeding can lower breast cancer risk, especially if a woman breastfeeds for longer than 1 year. There is less benefit for women who breastfeed for less than a year, which is more typical for women living in countries such as the United States.

Posited explanations  for  the  protection  breastfeeding offers include the reduced exposure to oestrogen found with breastfeeding and its usual tag-along, amenorrhoea (added to the 9 missed periods during pregnancy). In addition, lactating mothers tend to eat more nutritious foods and follow healthier lifestyles (limit smoking and alcohol use) while breastfeeding (BreastCancer.Org, 2015).

Hopper et al. (2018) also revealed in their study that family history is another important risk factor for breast cancer that could not exist without there being a very strong gradient in underlying familial risk. To explain an overall average estimate of a 2-fold increased risk associated with having an affected first-degree relative, there must be at least a 20-fold inter-quartile risk ratio across the underlying familial causes. The findings of this study are in tandem with this; respondents with history-positive first degree relatives have a 11.2% increased risk of having breast cancer compared to those  who  are  not (p-value = 0.002).

Other factors that can increase the risk of developing breast cancer according to literature are: Exposure to oestrogen through Hormone Replacement Therapy. A history of a typical hyperplasia of the breast and lobular or ductal carcinoma in situ are also associated with increased risk.

This study concluded that the risk for breast cancer is low in this study population. Family history of breast cancer was found to be highly associated with high risk of breast cancer while, duration of breastfeeding after 12 months reduces the risk for breast cancer development. Hence, importance of adequate breastfeeding should be emphasized in reduction of breast cancer development. More so,  nurses  can assist women in understanding the risk factors, apart from the unavoidable risk factors such as age, positive family history of breast cancer, increased age at first child birth however, nurses can help women by avoiding further risks by encouraging regular check-ups and, every effort has to be taken to encourage positive behaviour towards promotion of health among women especially when it comes to breast cancer issue. Individual should adopt a healthy lifestyle such as healthy diet, rich in fresh fruits, vegetables, high fibre, diet, low fat, exercise and screening. Health care professionals including grassroots level health care workers have to play a significant role in educating the public especially the high risk women and the involvement of family and community should be facilitated.

On the other hand, government should go beyond policy formulation but show sustained willingness for implementation.  Government   should   be   proactive   in controlling tobacco use, increase public awareness, community mobilization on the knowledge about risk factors on cancer early detection, screening and treatment. Government should also strengthen the existing cancer registries to ensure accurate and complete data collection; there should also be collaboration with the existing NGOs.

The following recommendations are proposed to improve upon the current situation of the healthcare services to help improve lowering the chance of breast cancer development.

(i) The risk factors for breast cancer development  are  an additional facet that nurses should incorporate into teaching women since the primary function of the nurse is prevention and health education.

(iii) Women with first degree relatives who have had breast cancer should be encouraged to go for breast screening (biopsy).

(iv) Health care professionals including grassroots level health care workers have to play a significant role in educating the public especially the high risk women and the involvement of family and community should be facilitated.

(vi) Women aged 40 years and older should have a yearly screening mammogram. Women in their 20s and 30s are advised to have a clinical breast examination with their regular physical examination at least every three years and annually thereafter

(viii) Health care providers should create awareness about the risk of developing breast cancer to the women of child bearing age at each visit to both Ante natal, Post natal and, child welfare clinics.

(ix) There should be policy formulation and implementation on free breast examination and screening procedures for women of child bearing age, so that this could be done at their visit to the clinics.

(x) Government should provide breast screening at low or no cost in other to encourage the women to go for screening procedures.