Practice of child spacing and its associated factors among women of child bearing age (15 to 49 years) in Illubabor zone, South West Ethiopia

Scholars defined optimal birth spacing as resting period between pregnancies that allows the mother time to recuperate from pregnancy,  labor  and  lactation.  Longer time period between births allows the next pregnancy and birth to be at full gestation and growth for years. Family planning programs support two  years  intervals  between births for infant and child health and survival (RamaRao et al., 2006; Orji et al., 2004). But recent studies recommend that birth intervals of 3 to 5 years are safer for mothers and babies as compared to birth intervals of two years or less (Yohannis et al., 2003; Orji et al., 2004).
Inter birth interval (IBI) has significant effect on the health status of the mother and her child (Cleland et al., 2008). It was indicated to be linked with increased risk of maternal morbidity and mortality, preterm birth, low birth weight, small for gestational age (SGA), labor dystocia, premature rupture of membranes, third-trimester bleeding, anemia and puerperal sepsis (USAID, 2005; WHO, 2005).
According to the Ethiopian Demographic and Health Survey (EDHS, 2014) report, with the exception of first birth, there is an inverse relationship between the length of the preceding birth interval and proportion of child who are stunted. The shorter the interval, the higher the proportion of children stunted. In Ethiopia, 40% of children under age five are stunted, and 18% of children are severely stunted. In general, the Central Statistical Agency (CSA) provide the prevalence of stunting increases as the age of a child increases, with the highest prevalence of chronic malnutrition found in children age 24-35 months (52%) and lowest in children between age six and eight months (9% percent) (CSA, 2014).
Besides the health implication, closely spaced birth intervals accelerate the population growth and challenge the development efforts of a country. By limiting women contribution to economic development, it makes difficult for them to become productive members of society. Moreover, when a newborn baby comes, that family will invest more of its limited resources to care for the newborn, while the other children will be left behind to receive insufficient share of the resources (USAID, 2005). On the contrary, optimal birth spacing (OBS) yields the greatest health, social and economic benefits for the family. Although, previous research findings advocate an interval length of 2 years between two consecutive births for a better maternal and child health (WHO, 2005), current evidence shows that births should be spaced at three to five years apart to ensure the greatest health benefits for mothers, newborns and older children (WHO, 2005; USAID, 2005).
Davanzo et al. (2004) attributes the adverse consequences of a short birth interval for infant and child survival and maternal mortality to the biological effects related to the “maternal syndrome “or more generally, the women not fully recovering from one pregnancy before supporting the next one (which may lead, for e.g., to anaemia and premature rupture of membranes).
Ethiopia is one of the countries with the highest maternal mortality ratios in Africa and the world, estimated at 673 per 100,000 live births in 2011. This is associated with the low levels of antenatal care and birth attendance by health professionals in Ethiopia, especially among the poor-as well as early age at marriage and first birth. Among the 20 to 35 years old, about 30% of all female adult deaths are from maternal deaths at birth (CSA, 2006 cited in World Bank, 2007).
Addressing these issues is vital because short birth interval is a modifiable risk factor and is potentially within the control of individuals and couples. Birth spacing is a public health intervention that can use available modern contraceptive methods and technologies. The birth spacing programs, using contraception in combination with revised and strengthened birth spacing education and counseling messages, can be mainstreamed into existing health and non-health programs in both clinical setting and community setting. Therefore, understanding practice of birth interval and its associated factors among women of reproductive age is critical for countries like Ethiopia with a population policy aiming at reducing fertility.

Study design
A community based quantitative cross-sectional study design was used. All married women in reproductive age group (15 – 49 years) having at least two children available at their household during the data collection period were included in the study.
Sample size determination
The sample size was determined using the formula for single population proportion and considering 36.8% proportion of optimal birth interval in Lemo District, Southern Ethiopia (Yohannes et al., 2011), 95% CI 5% margin of error, design effect of 2 and 10% non response rate yielding the total sample sizeAn attempt was made to adopt a three stage sampling technique. The first stage involved the selection of districts by simple random sampling technique. The second stage was selection of Kebeles from the selected districts again using simple random sampling technique. Then, the third stage was selection of households using systematic random sampling technique.
Data collection procedures
The data were collected using pre-tested interview guided semi-structured questionnaire. The questionnaire was prepared in English and translated to Amharic and Afan Oromo versions. It was checked for its consistency and then translated back to English by different individuals. The translations were made by those who are well oriented with the stated languages (language professionals). The instrument was adopted from different literatures developed for similar purpose by different authors and tools designed by various organizations.
Data analysis
The data were double entered onto EPI data version 3.1 and exported to SPSS (SPSS Inc. version 20.0, Chikago, Illiois) computer software for further analysis. Errors related to inconsistency of  data  such  as  missing  values  and  outliers  were checked and well thought-out during data cleaning. Descriptive statistics were used to give clear picture of the dependent and independent variables. Frequency distributions of the variables were worked out using tables and figures. Logistic regression model fitness was checked by using Hosmer Lemshow test of significance and omnibus test.
A two-step logistic regression (bivariate and multivariable) analysis was done to see the effect of independent variables on practice of child spacing in married women of child bearing age (15-49 years). In the first step, bivariate analyses were done to assess the association between each independent variable and the outcome variables. All variables with p-value less than or equal to 0.25 in the bivariate logistic regression model were entered into the multivariable logistic regression model using backward elimination method to control for all possible confounders. At this step, odds ratio along with 95% CI was estimated to identify factors associated with optimum child spacing.
Data quality control
The appropriateness of the questionnaire in terms of content, consistency, language and organization was checked meticulously and was modified in line with standards, guidance and suggestion from peer reviewers. A pretest was employed in Bedele 01 kebele on a total of 42 (5%) of respondents five days prior to the actual data collection. Findings were discussed among data collectors and supervisors in order to ensure the quality of data.
Based on the pretest, questions were revised, edited and those found to be unclear or confusing were modified. Finally, structured closed ended Afan Oromo and Amharic version questionnaire were used for data collection.
Supervisors and data collectors were trained on the data collection process, accuracy and completeness for three consecutive days. The overall activity was closely monitored by principal investigators of the study during data collection. To reduce non-response rate and unwanted confusion, necessary information and description was given to the study participants before initiating the interview. The data quality was controlled by designing ideal data collection tools and close supervision with aggressive monitoring. The information obtained was checked and cleaned up before and after data entry. 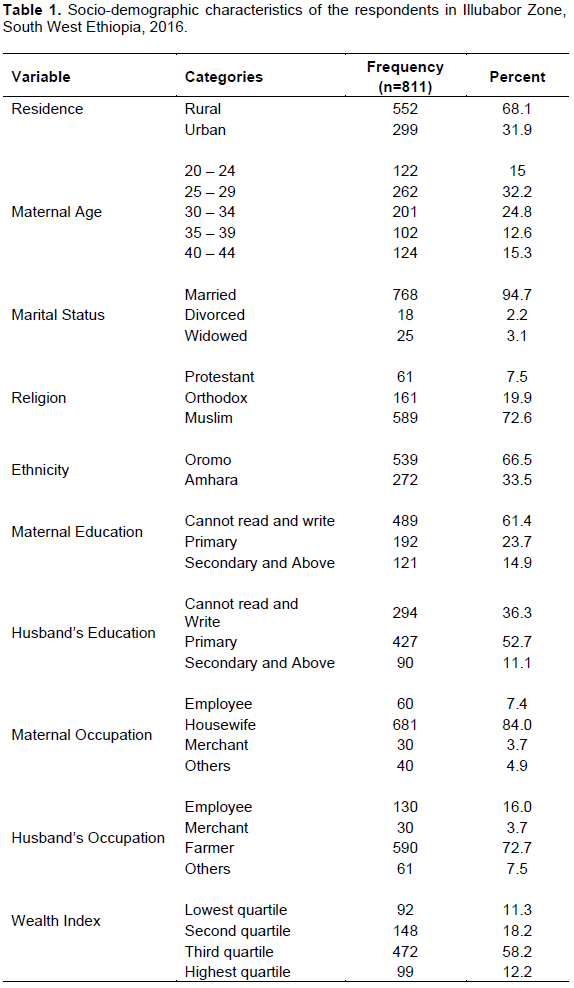 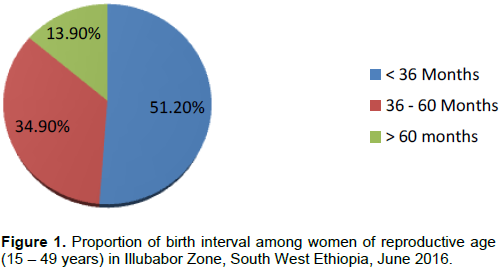 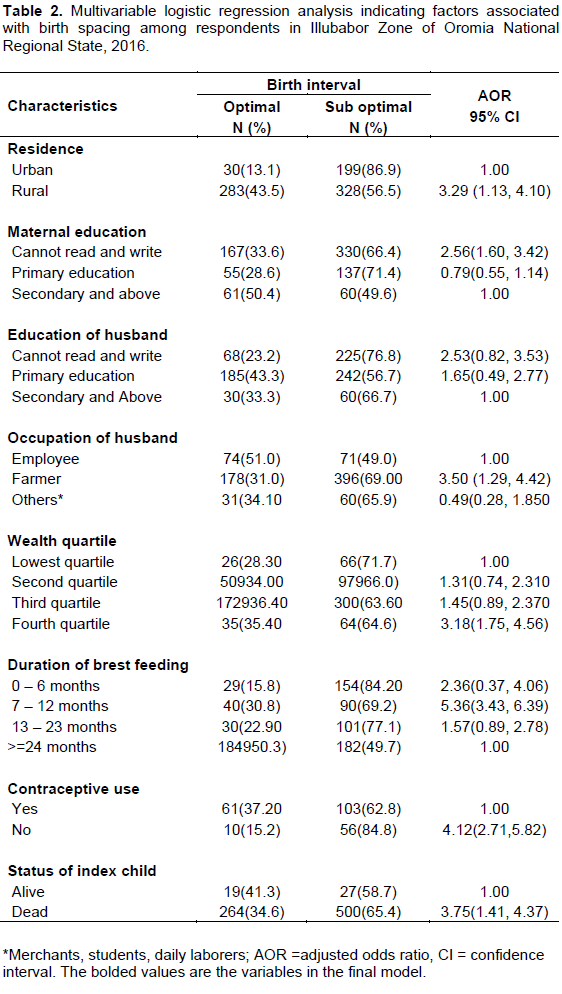 Almost all the respondents have ever heard about optimal birth interval between two successive births. However, more than half (57%) of the participants in the reproductive age group have been practicing short birth interval below the recommended duration of optimal birth spacing. Place of residence, maternal education, husband’s occupation, wealth quartile, duration of breast feeding, contraceptive use and status of index child, were independent predictors of optimal child spacing among women of reproductive age.
Hence, in the interventions designed to address optimal birth spacing, use of contraceptive methods and maternal education should be given greater attention in addition to prevention of infant and child mortality.