Design
This study adopted a survey design for the data collection which involves the use of questionnaires for research data collection, and its advantage is based on its suitability in studying a large population while collecting the data required for the study at once and within a very short period. The variables include; social support,gender, fears of failure, entrepreneurial self-efficacy, and entre-preneurial intentions.
Settings
The study was conducted in Ibadan located in South West Nigeria. It has eleven (11) local governments in metropolitan area consisting of five urban local governments in the city and six semi-urban local governments in the fewer cities. Ibadan is a home to six (6) higher institutions and has population of 3.2 million people. Specifically, this study took place in University of Ibadan, Ibadan Oyo State.
Participants/ Sample
A total number of two hundred and ten (210) postgraduate students were selected purposively and randomly for the study as the target population of the study. Data were gathered through personally administered questionnaires using simple random sampling on postgraduate students from Faculty of Social Sciences and Faculty of Law, University of Ibadan. Departments used for the study includes Psychology, Sociology, Economics, Political Science, Geography and Law. The informed consent of participants was obtained. Hence, the questionnaires were distributed during scheduled classes following a brief verbal introduction to the study. The participants were randomly selected for the study using balloting (odd/even numbers). The questionnaires are strictly distributed only to postgraduate students that pick even numbers, while those that pick odd numbers were not included in the study. The demographic variables of the sample are presented in Table 1. 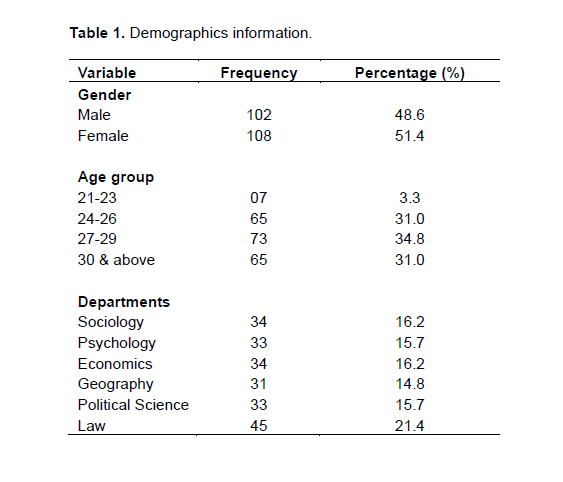 Measures
Four research instruments were used for the study which includes: Entrepreneurial self-efficacy scale developed by De Noble et al. (1999), fear of failure scale jointly developed by Conroy et al. (2002), Entrepreneurial Profile Questionnaire (EPQ) used by Leong (2008) and Social support scale developed by Sanchez-Almagro (2003).  The instruments were reported to have high validity and the internal consistency reliability coefficients. The psychometric properties for four scales reported to have reliability co-efficient of 0.70, 0.81, 0.87 and 0.70. From this present study, Cronbach alpha Coefficient of 0.85, 0.69, 0.79 and 0.68, was established. The analyses of data include Pearson r, multiple regression, and t-test for independent samples.

Hypothesis five
Male graduates will significantly score higher on entre-preneurial intention than female graduates. It was tested using t-test for the independent samples and the results are presented in Table 6. Table 6 result indicates that male graduate have higher significant entrepreneurial intention than those female graduates [t= (208) = 2.615, p<.05].  Male participants had a mean score of 43.61; Female participants had a mean score of 38.24.  Therefore, the results fully support the stated hypothesis and it is accepted.

It has been established that fear of failure, gender, social support and entrepreneurial self-efficacy all influence entrepreneurial intention of Nigerian graduates. In this case, all levels of government in the country need to be reminded that unemployment especially among youths is a time bomb for any country. Experience from other nations, including some in Africa, has pointedly shown that youth unemployment could provoke violent revolutions.
The researcher recommends that Universities should design suitable entrepreneurial courses that would promote the graduates' intention to start up their own businesses. Nigeria could boost its economy through entrepreneurial promotion. Therefore, Government should design larger and more realistic programmes for Job creation.