Amputation is one of the most dreadful complications in diabetes. Diabetic amputees are at elevated risk of psychological distress due to their disability. Thus, the current study aimed to evaluate the effect of intensive counseling on psychological outcomes among type 2 diabetic patients undergoing amputation. The study was conducted among 62 consecutive patients admitted in the diabetic centre and who underwent an amputation. These patients were randomly assigned to a routine counseling group (RCG-26) and intensive counseling group (ICG-36). World Health Quality of Life (WHQOL) was administered individually to all the patients based on inclusion criteria. In the RCG group, psychological therapy was given before amputation. For patients in the ICG group, psychological therapy was given before and every day after amputation, till the day of discharge. WHQOL questionnaire scores together with the demographic details were also recorded accordingly. The finding highlighted that the overall quality of the life improves in ICG group in both BKA and Toe amputation, as compared to the RCG group. ICG has better impact on QOL than RCG in amputation patients. Thus, intensive assessment and intervention has to be included as part of routine management among patients with diabetes when they undergo a surgical amputation.

Patients with type 2 diabetes mellitus (T2DM) develop multiple complications such as retinopathy, nephropathy and neuropathy. Ulceration and amputation are the most important consequences in diabetic foot problem (Aalaa et al., 2012; Alavi et al., 2014; Cavanagh et al., 2005). About 4 to  10%  of  diabetic  patients  suffer  from  a  foot ulcer (Lauterbach et al., 2010; CDC, 2005, Abbas and Archibald 2005). In a recent review on the global variability in the incidence of lower extremity amputation, about around 10.5% of patients underwent major amputations due to diabetic foot. In diabetic patients, majority of the amputation are preceded by  foot  infection
(ADA, 1999; Moxey et al., 2011). Hence the development of foot infection is the result of combination of infection, peripheral vascular disease, poor foot care and peripheral neuropathy (Boulton, 1996; Boulton et al., 2005). In India, diabetic foot complication is the most common cause of hospitalization among diabetic patients due to various sociocultural practices like barefoot walking, lack of knowledge on diabetic foot complications, poor education and socioeconomic conditions (Vijay et al., 1997). In India, it is found that the prevalence of foot ulcers in diabetes patients is 3%, which is lesser as compared to western population (Pendsey, 1994). Severe diabetic foot infections leads to amputation, it is estimated that diabetes leads to more than 50% of amputation (Bengalorkar and Kumar 2011), among them, nearly 85% of the amputation in diabetic patients are due to foot ulcer (Pecoraro et al., 1990). The economic and emotional consequences for the patient and the family can be enormous (Shobhana et al., 2000). Prevalence of foot ulceration is high  among  rural population  than  urban  population,  despite  receiving  similar counseling. Further, rural patients were more prone to re ulceration and need surgical intervention (Viswanathan et al., 2006). It is also reported that 25% of amputees suffer from depression, feeling of insecurity, self consciousness and restlessness (Parkes, 1976). Amputation is triple threat which Involves loss of function, sensation and body image. It is a life changing event which affects almost all aspects of the individual life. Amputations are classified into major (above/below knee) and minor (removal of toes and feet) amputations.
Worldwide, about 50% of all non-traumatic lower extremity amputations are due to diabetes (Chaturvedi et al., 2001). The risk of lower extremity amputation is 15 to 46 times higher in diabetic patients than in persons who do not have diabetes (Lavery et al., 1996). It was shown that 15% of patients with diabetes develop a foot ulcer during their lifetime (Reiber, 1996). Due to DFU, in every 30 s one leg is being amputated among T2DM patients (Richard and Schuldiner, 2008). Amputation is a major cause of substantial emotional and physical distress. It also affects the financial condition and productivity of the amputee’s, which reflects on the quality of life (Vileikyte, 2001). An alteration in an individual's body image sets up a series of emotional, perceptual and psychological reactions and also noted that limb amputation could lead to a long-term disorder in the individual's body experience (Srivastava et al., 2010). Body image is the scheme of our own body, which forms in every one’s minds. It has direct connection with psychological adjustment; its dynamic construction was subject to revision and reconstruction in response to both internal and external stimuli. Readjusting to life after amputation is associated with depression, anxiety and disturbed body image (Rybarczyk et al., 1992). Apart from physical disability,  amputees  suffer  from  psychological and psychosocial problems and not much focus is given on the psychological state of the individual who undergoes amputation unless he or she presents with behavioral abnormalities.
Amputee’s experience post-traumatic stress disorder, due to traumatic injury (Breslau, 2001). The occurrence of physical disability presents the patient with not only physiological, but also a psychological disturbances. Role of psychological intervention will not only help in adaptation but will also enhance the well being in cases with amputation and it also plays a major role in adaptation among amputee (Desmond and Maclachlan, 2002). Intervention in the amputee’s distress would address the psychological part of the injury and healing which is paramount to physical rehabilitation (Schubert et al., 1992). Recent studies emphasized significant levels of anxiety, grief and social isolation found among people with amputations (Schubert et al., 1992; Frierson and Lippmann 1987; Thompson and Haran, 1984). When compared with single counseling session, multiple counseling sessions was effective in improving the rehabilitation of the amputees (Srivastava and Chaudhury, 2014). Perhaps, there is paucity of studies which focused on the effect of intensive counseling; hence an attempt has been made here to analyze the effectiveness of intensive psychological counseling with routine psychological counseling.

A hospital based prospective follow up study was conducted among 62 consecutive patients with T2DM who underwent amputation in a tertiary care hospital, North Chennai, India, during the study period (June 2015 to February 2016). The study population includes all patients aged 40-70 with diabetic duration more of than 2 years. Psychological details were recorded accordingly. Patients with T1DM, major psychiatric disorder were excluded from the study. The study was approved by institution ethics committee. Patients were assigned to intensive counseling group (ICG) or routine counseling group (RCG) based on randomization chart. Performa measuring the quality of life was administered individually before and after amputation for both the groups.
Group-1- routine counseling
In RCG group psychological counseling was given to the patients before amputation. Pre amputation stress level was assessed using WHQOL questionnaire and post amputation stress level was assessed using the same questionnaire on the day of discharge.
Group-2- intensive counseling
In ICG group psychological counseling was given before amputation. Pre-amputation stress level was administered using WHOQL questionnaire. They were followed up and post psychological counseling were given everyday till the day of discharge addressing their specific concerns related to psychological issues and post amputation stress were measured using same questionnaire on the day of discharge.
World Health Quality of Life (WHQOL)
WHQOL was administered throughout the study. It consists of 4 domains with 26 questions which measures physical health, psychological health, social and environmental factors. SPSS software was used to assess data.

A total of 62 patients were included in the study out of which 36 patients were enrolled in the intensive counseling group (ICG) and 26 in the routine counseling group (RCG). Mean age of  the  RCG  and  ICG  patients was 60.11 and 60.86, respectively. Demographic variables of patients are represented in Table 1. Majority of the patients are educated at school level and employed in private sector. Mostly, family income of patients was between 5000-10,000 Rs. hailing from an urban background. Among the study group, 63% of patient had undergone toe amputation and 37% had below knee amputation. 68% of patient’s had family history of diabetes and mean duration of diabetes in RCG and ICG was 12.76 and 13.69 years, respectively. 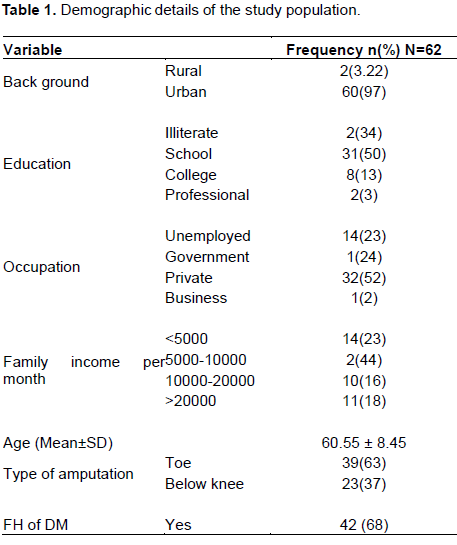 The mean score of all domains of Quality of Life in Pre & Post amputation among RCG & ICG group is presented in Tables 2 and 3. RCG group did not show a significant difference among pre & post amputation in all the four domains of WHQOL in both Toe and BKA amputation. In ICG group, significant improvement was observed in both Toe (p<0.0001) and BKA (p<0.0001) amputation  in  all domains  of  quality of  life  such  as physical  health, psychological health, social health and environmental factors. The intensive psychological counseling has better psychological outcomes on the quality of life as compared to RCG. Further finding showed that intensive psychological counseling showed better improvement in BKA amputation, as compared to toe amputation in all the domains of WHQOL.

Figure 1 shows  that  there  is  no  much  difference found between pre and post Toe and below knee amputation subjects in control group and with single psychological counseling session, no significant improvements were found among amputees during the time of discharge. 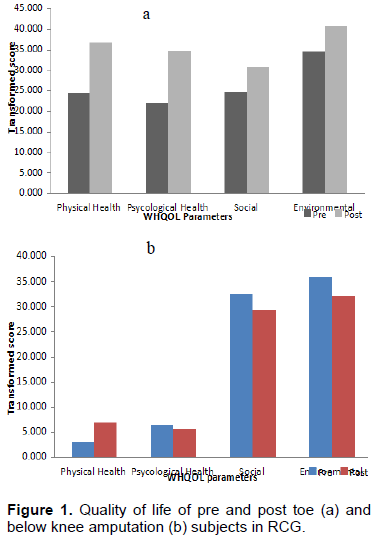 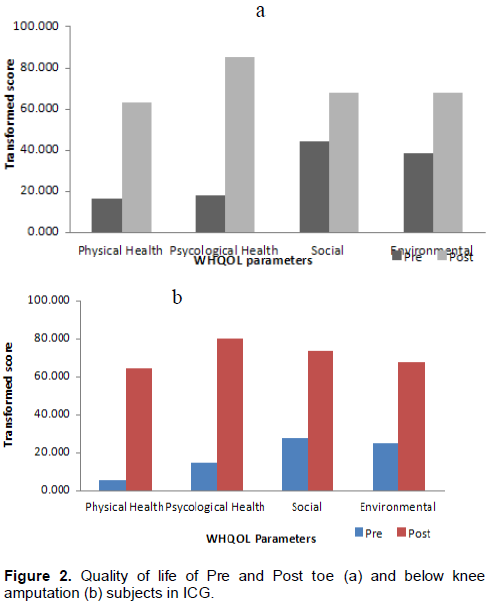