Potato, an important food and nutrition security can be produced two or more times in a year in Ethiopia. It plays an important role in human diet and a source of income for smallholder farmers. However, its productivity is low owing to limited availability of planting materials and poor tuber sprouting of improved varieties. Lack of quality seed is a major problem affecting expansion of potato production.  The objective of the study is to determine effects of different methods and rates of Gibberellic acid (GA3) application on dormancy of potato variety, Gera cultivar. The experiment was conducted at Holetta Agricultural Research Center during 2008 to 2009. It consisted of five levels of GA3 as haulm application, a week prior to destruction and five levels of GA3 as a dipping treatment immediately after harvest for 24 h. Randomized Complete Block Design with three replications was used. Result revealed GA3 application affects dormancy and sprouting. Haulm application of GA3 at 750 and 1000 ppm reduced dormancy period by 24 to 27 days, respectively. Dipping treatments of 40 and 50 ppm reduced dormancy period by 18 to 20 days, respectively. The study indicated that haulm application of GA3 at 750 or 1000 ppm and dipping treatments of 40 or 50 ppm resulted in early dormancy termination, shoot emergence and increased sprout.

Dormancy break experiment
Dormancy period
Highly significant differences (P<0.01) was found among the treatments with regard to tuber dormancy period (Table 1). The data showed that all haulm applications and dipping of GA3 significantly reduced tuber dormancy period below the control with more reduction when the concentration of GA3 increased. Haulm application of 750 and 1000 ppm GA3 reduced the duration of tuber dormancy by about 24 and 27 days, respectively after harvesting as compared to control and other treatments. Similarly, tubers treated with 40 and 50 ppm GA3 solutions reduced the duration of tuber dormancy by about 18 and 20 days, respectively. Moreover, low GA3 concentration (10 ppm) used as dipping resulted in 8 days of reduction as compared to untreated tubers. In accordance with the current results (Dogonadze et al., 2002) reported that GA3 treatment immediately after harvesting reduced the duration of tuber dormancy by 38 to 42 days. These authors indicated that GA3 is involved in breakage of dormancy and growth stimulation. Alexopoulos et al. (2008) showed that a haulm application of GA3 just before haulm destruction, shortened the dormancy period of the harvested seed tubers up to three months. In line with this study, a foliar spray of gibberellic acid, 3 to 6 days before haulm killing shorten potato tuber dormancy period and induced sprouting (Van Ittersum et al., 1993). In addition, Shibairo et al. (2006) reported that postharvest application of gibberellins to tubers grown from seed potatoes promotes the breakage of dormancy. Coleman (1987) also reported that exogenous gibberellins (GA) generally terminate dormancy in potatoes and may play important roles as endogenous regulators of bud dormancy and development. This is also in agreement with several other reports (Kim et al., 1996; Claassens and Vreugdenhil, 2000).
Average number of sprout per tuber
Highly significant differences (P<0.01) was found among treatments with regard to the number of sprout per tuber as presented in Table 1. Regardless of the concentration, all haulm application treatments and dipping of tubers in 40 and 50 ppm GA3 gave significantly higher sprout number compared to the control. In line with the current investigation, Alexopoulos et al. (2008) reported that, sprout number of tubers from plants sprayed with high GA3 concentration was significantly higher than that of tubers from control plants. Similarly, Shibairo et al. (2006) found that irrespective of the concentration, GA3 treatments (1, 5, 10 and 50 mg/L) significantly increased the number of sprouting buds per tuber compared to the control. GA3 treatments increase the number of sprouts (Van Hiele, 1961; Ezekiel and Singh, 2005; Alexopoulos et al., 2007a; Otroshy and Struik, 2008) the length of the sprouts (Bruinsma and Swart, 1970) and proportion of sprouts by about 10% (Holmes et al., 1970). Similarly, Demo (2002) showed that increase in GA3 concentration led to increase in sprouting percentage, number of sprouts per tuber, sprout length and sprout vigor. Results of the current experiment indicated that both haulm application and dipping treatments of GA3 increased number of sprouts and sprouting capacity and a good alternative to improve potato seed quality to be utilized as for next planting. 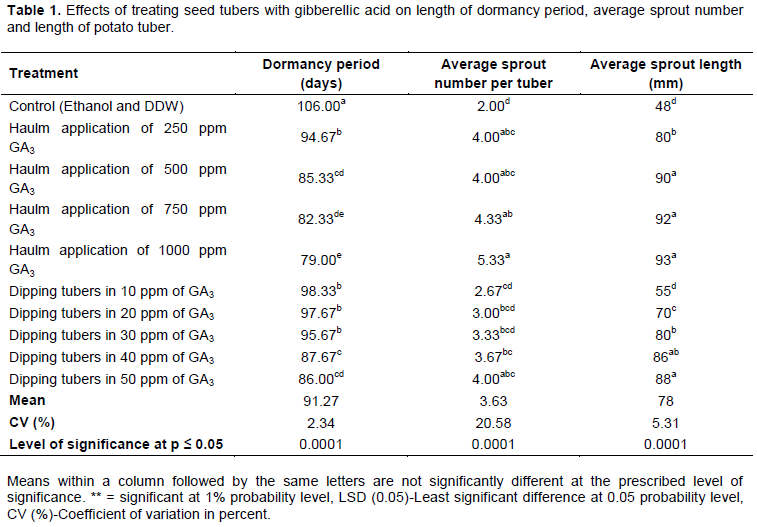 Average sprout length per tuber
Average sprout length was significantly (P<0.01) influenced by GA3 treatments (Table 1). Applications of GA3 at a rate of 500, 750 or 1000 ppm increased sprout length by about 91% as compared to the control. Similarly, in reference to the control (48 mm long) about 83% sprout length increment was obtained in response to dipping of the tubers in 40 or 50 ppm GA3 solution. The data revealed that both haulm application and dipping treatment with GA3 showed increasing trend of sprout length with increasing the  rate of GA3. In agreement with current results, Alexopoulos et al. (2007b) observed that the mean sprout length per tuber following treatment with GA3 or GA3 + BA was significantly higher than that of the controls. Similarly, Bruinsma et al. (1967), Alexopoulos et al. (2007b) showed that sprout length on seed tubers increases by exogenously application of GA3. In addition, Bruinsma and Swart (1970) reported that mini-tubers treated with gibberellic acid were effective in increasing the length of sprouts. Lim et al. (2004) also noted that tubers of GA3 treated showed fast sprout growth and potato tubers treated with higher dose of GA3 (150 mg/L) sprouted earlier than other treatments. Thus, GA3 treatments resulted in high sprout growth rates possibly due to an increase in assimilate flow towards the growing sprouts.
Fresh and dry mass of sprouts
Highly significant difference (P<0.01) was found among treatments with regard to fresh and dry mass of sprout per tuber (Table 2). Haulm application of GA3 at 1000 ppm resulted in the highest fresh mass (1040 mg) of sprout which was 103% more as compared to the control. In the same way, foliar spray of GA3 at a rates of 500, 750 or 1000 ppm and dipping in 50 ppm of GA3 brought about 78 and 52% dry sprout mass increment compared to the control (112 mg). In agreement to this study, Lim et al. (2004) found that the fresh weight of sprouts per tuber following treatment with GA3 or GA3+BA was significantly higher than that of the controls. Therefore, increased concentration of GA3 treatment increased growth of sprouts  per tuber  and  also  the  rate  of  transfer  of  dry matter from tuber to sprout and final improved sprout dry matter. In the current study, fresh and dry mass of sprouts were positively correlated with average sprout number (r = 0.97**; r = 0.81** at (P<0.01) and sprout length (r = 0.98**; r = 0.86** at (P<0.01) indicating that GA3 treatment increased sprout mass by increasing both sprout number and length.
Percentage weight loss of tubers
Highly significant differences (P<0.01) was found among treatments with regard to percentage weight loss of the tubers (Table 2). The percent weight loss of tubers were significantly higher in the tubers treated with 1000 ppm (92.8%) followed by 750 ppm (78.7%) of GA3 as compared to the control (58.2%). In the present study, tubers weight loss may be due to water loss, utilization of reserve carbohydrates by newly emerging sprouts and respiration of mother tubers. In agreement with this study, Alexopoulos et al. (2007a) reported that GA3 treated tubers showed significantly higher weight loss as compared to untreated tubers. The authors described that, the higher weight loss in GA3 treated tubers in the first 7 days after treatment could be attributed to the incisions made to facilitate the entry of GA3. Similarly, Burton (1989) and Shibairo et al. (2006) indicated that sprouting is accompanied by many physiological changes including increases in reducing sugar content, respiration, water loss, and glycoalkaloid content and also mentioned that GA3 increased the rate of weight loss as compared to untreated tubers. The  higher  weight  loss  in GA3 treated tubers may be due to the higher rate of metabolism which is associated with sprout initiation and growth (Reust, 1986). Burton (1989) stated that treating potato tubers with GA3 or GA3 + BA caused an increase in weight loss and respiratory activity. The author further indicated that, the higher rates of weight loss and respiration in tubers from GA3 treated plants probably resulted from the presence of sprouts on these tubers.

In Ethiopia, potato is the fastest growing major crop in the developing world with important economic impact on many resource-poor farming families. However, in Ethiopia, the yield per unit area of potato is very low compared to those of other countries. It is one of the most widely used root and tuber crop in human diet. It is also an important cash crop for farmers in the mid and highlands of the country, where it is grown abundantly. However, lack of quality planting materials among growers is a limiting factor adversely affecting production and productivity in these areas. Most potato producer farmers generally use poor tuber sprouting techniques, which also contribute to poor supply of quality seed for year-round potato production. Thus, bringing potatoes to a warm place was used by more than 20% of the farmers in Ethiopia, while also putting the seed potatoes in bags was frequently mentioned. Conversely, identifying appropriate management practices to improve the quality of planting materials is a priority to introduce plant growth regulator  for    potato   producers.   Thus,    both    haulm application and dipping methods of treatments have effect on breaking dormancy, early emergence of shoots. Haulm applications of GA3 at 750 and 1000 ppm reduced dormancy period by 24 and 27 days, respectively. It also hastened early physiological maturity, increased average sprout number and sprout length of tubers, respectively. Similarly, dipping treatment of 40 and 50 ppm reduced dormancy period by 18 days and 20 days, respectively, and had more effect over the control than lower concentrations. Haulm application of 750 or 1000 ppm reduced days to emergence by 11 days while dipping of seed tubers in 40 and 50 ppm reduced days to emergence by 6 and 8 days, respectively. Therefore, GA3 affected the physiological age of the tubers by inducing the breakage of bud dormancy at all stages of tuber growth. Although the experiment was conducted in one location and season using a single cultivar it is reasonable to point out that foliar application of gibberellic acid one week before harvest and dipping tubers resulted in shortened dormancy period, increased sprout mass and improved both yield and quality of the subsequent potato generation.